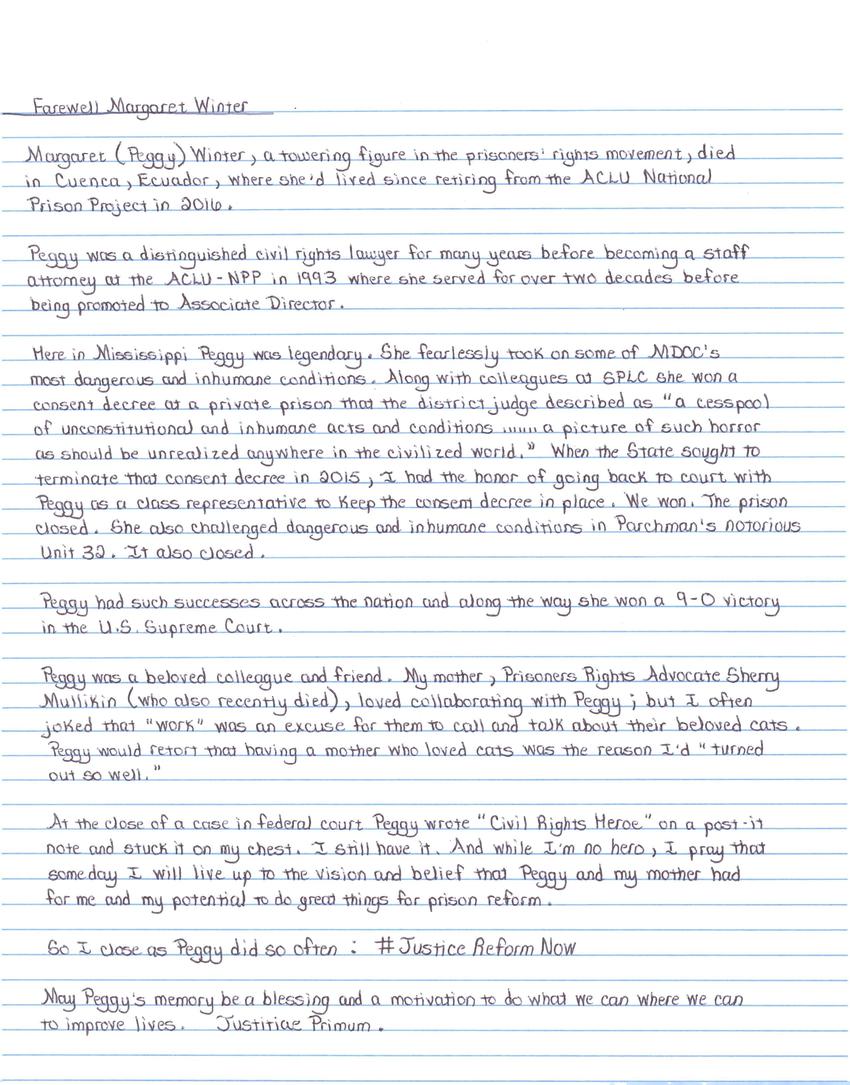 Margaret (Peggy) Winter, a towering figure in the prisoner's rights movement, died in Cuenca, Ecuador, where she'd lived since retiring from the ACLU National Prison Project in 2016.

Peggy was a distinguished civil rights lawyer for many years before becoming a staff attorney at the ACLU-NPP in 1993 where she served for over two decades before being promoted to Associate Director.

Here in Mississippi Peggy was legendary. She fearlessly took on some of MDOC's most dangerous and inhumane conditions. Along with colleagues at SPLC she won a consent decree at a private prison that the district judge described as "a cesspool of unconstitutional and inhumane acts and conditions...a picture of such horror as should be unrealised anywhere in the civilised world." When the State sought to terminate that consent decree in 2015, I had the honor of going back to court with Peggy as a class representative to keep the consent decree in place. We won. The prison closed. She also challenged dangerous and inhumane conditions in Parchman's notorious Unit 32. It also closed.

Peggy had such successes across the nation and along the way she won a 9-0 victory in the US Supreme Court.

Peggy was a beloved colleague and friend. My mother, Prisoners' Rights Advocate Sherry Mullikin (who also recently died), loved collaborating with Peggy; but I often joked that "work" was an excuse for them to call and talk about their beloved cats. Peggy would retort that having a mother who loved cats was the reason I'd "turned out so well."

At the close of a case in federal court Peggy wrote "Civil Rights Hero" on a post-it note and stuck it on my chest. I still have it. And while I'm no hero, I pray that some day I will live up to the vision and belief that Peggy and my mother had for me and my potential to do great things for prison reform.

So I close as Peggy did so often: #JusticeReformNow

May Peggy's memory be a blessing and a motivation to do what we can where we can to improve lives. Justitiae Primum.

Thank you for sharing your tribute to Peggy. I hope her cats are doing OK.