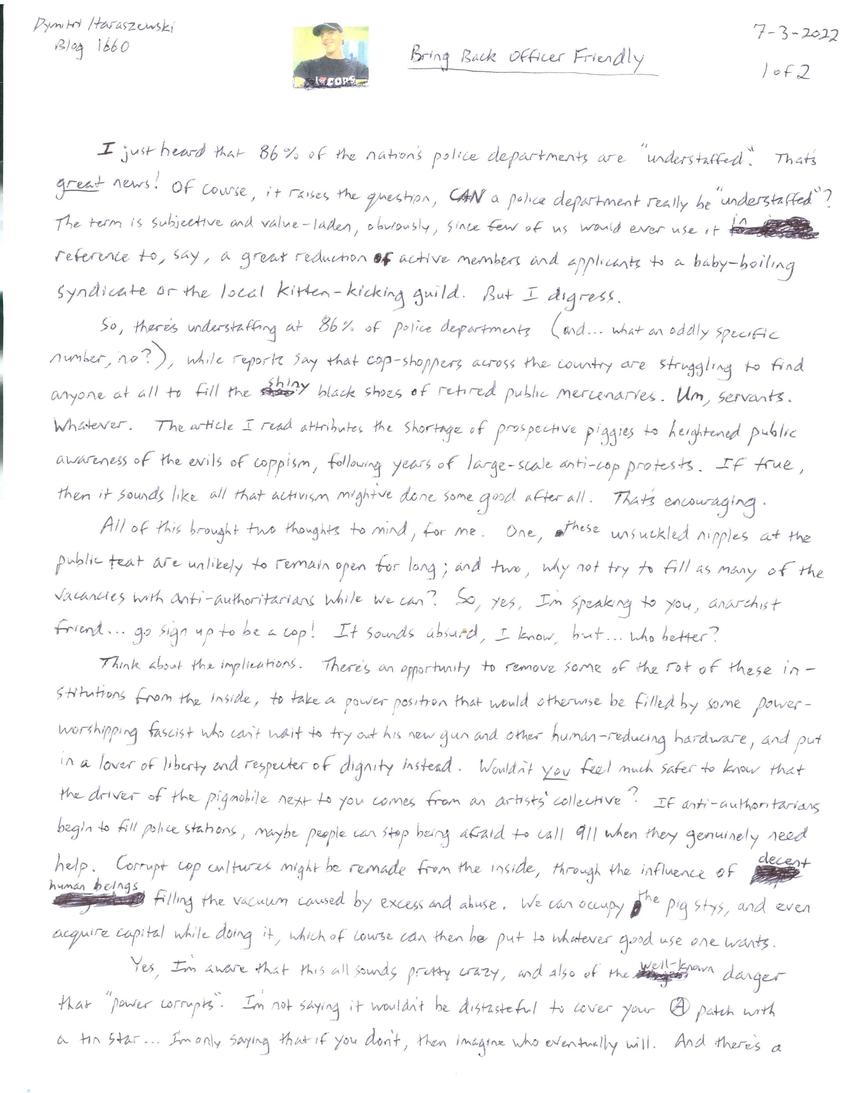 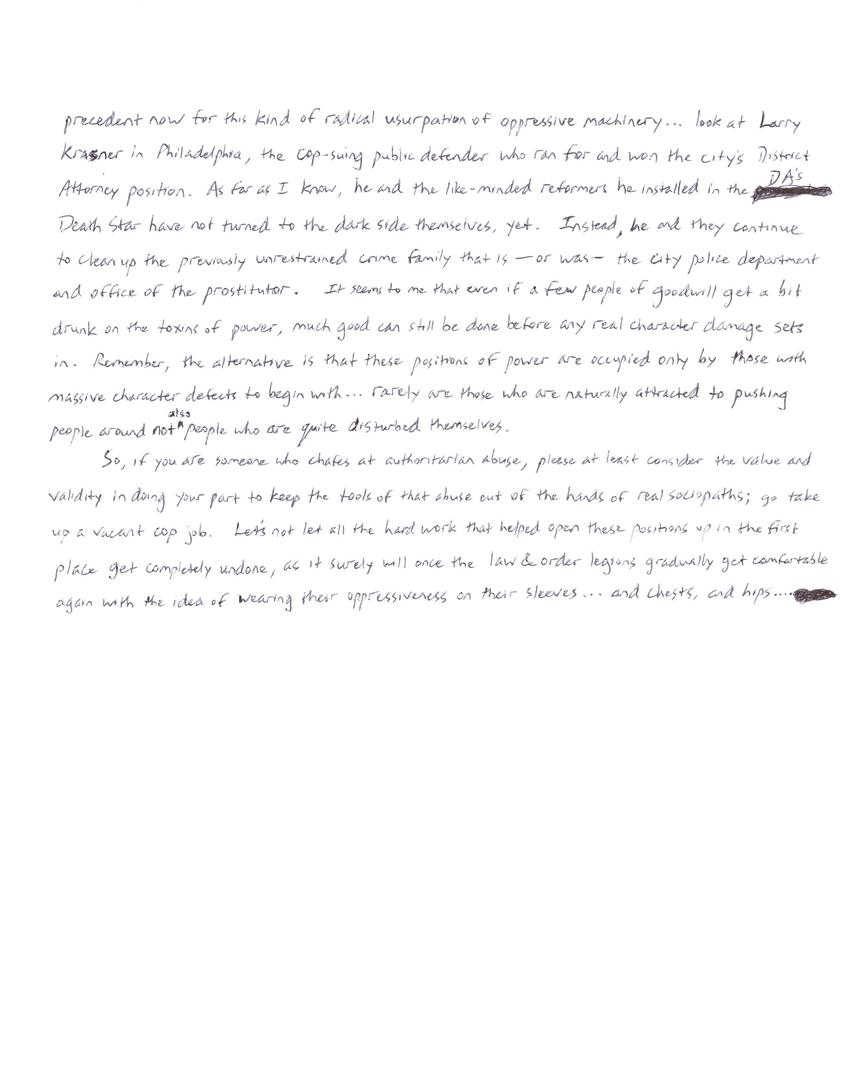 I just heard that 86% of the nation's police departments are "understaffed." That's great news! Of course it raises the question, CAN a police department really be "understaffed?" The term is subjective and value-laden, obviously, since few of us would ever use it in reference to, say, a great reduction of active members and applicants to a baby-boiling syndicate or the local kitten-kicking guilt. But I digress.

So... there's understaffing at 86% of police departments (and... what an oddly specific number, no?). While reports say that cop-stoppers across the country are struggling to find anyone at all to fill the shiny black shoes of retired public mercenaries, um, servants—whatever. The article I read attributes the shortage of prospective piggies to heightened public awareness of the evils of coppism, following years of large-scale anti-cop protests. If true, then it sounds like all that activism might've done some good after all. That's encouraging.

All of this brought two thoughts to mind, for me. One, these unsuckled nipples at the public teat are unlikely to remain open for long. And two, why not try to fill as many of the vacancies with anti-authoritarians while we can? So, yes. I'm speaking to you, anarchist friend. Go sign up to be a cop! It sounds absurd, I know, but who better?

Think about the implications. There's an opportunity to remove some of the rot in these institutions from the inside, to take a power position that would otherwise be filled by some power worshipping fascist who can't wait to try out his new gun and other human-reducing hardware, and put in a lover of liberty and respecter of dignity instead. Wouldn't you feel much safer to know that the driver of the pigmobile next to you comes from an artist's collective? If anti-authoritarians being to fill police stations, maybe people can stop being afraid to call 911 when they genuinely need help. Corrupt cop cultures might be remade from the inside, through the influence of decent human beings, filling the vacuum caused by excess and abuse. We can occupy the pig stys, and even acquire capital while doing it. Which of course can the be put in whatever good use one wants.

Yes, I'm aware that this all sounds pretty crazy and, also, I'm aware of the well-known danger that power corrupts. I'm not saying it wouldn't be distasteful to cover your ⓐ with a tin star. I'm only saying that if you don't, then imagine who eventually will.

And there's a precedent now for this kind of radical usurpation of oppressive machinery. Look at Larry Krasner in Philadelphia, the cop suing public defender who ran for and won the city's District Attorney position. As far as I know, he and the likeminded reformers he installed in the DA's Death Star have not turned to the dark side themselves. Yet. Instead, they continue to clean up the previously unrestrained crime family that is—or was—the city police department and office of the prostitutor.

It seems to me that even if a few people of good will get a bit drunk on the toxins of power, much good can still be done before any real character damage sets in. Remember, the alternative is that these positions of power are occupied only by those with massive character defects to begin with. Rarely are those who are naturally attracted to pushing people around also not people who are quite disturbed themselves.

So, if you are someone who chafes at authoritarian abuse, please at least consider the value and validity in doing your part to keep the tools of that abuse out of the hands of real sociopaths. Go take up a vacant cop job. Let's not let all the hard work that helped open these positions up in the first place get completely undone, as it surely will once the law and order legions gradually get comfortable again with the idea of wearing their oppressiveness on their sleeves... and chests, and hips...

Interesting opinion piece on this topic.

I recently read a book that says, in essence, the best managers are people who don't aspire to be managers to begin with. They're the people who pay attention, work beside, and are pliable to change their work operations for the greater good of their team. Often they're the ones who have actual work experience of their team's various positions under their belt, so they speak the same language as their coworkers. If there's something they don't know, they adapt and ask first-hand opinions from their members. They lead with a strong backbone and compassion.

The ones with the worst performance records and lowest satisfaction reports are ran by managers who have managing experience but use that as a pedestal of their expertise. Yes, they can lead and delegate. They can get results. They may sometimes reward their team with gifts. But they also have the highest burn out rates and poor communication with their team. Their general attitude amounts to, "Just get it done. No exceptions."

So you're onto something when you say that the best officers can be people who don't aspire to be officers to begin with. It's been proven already in the corporate retail workforce, and it's not that much of a stretch to imagine it in other careers as well.

Wishing you well. Thank you for writing. :)