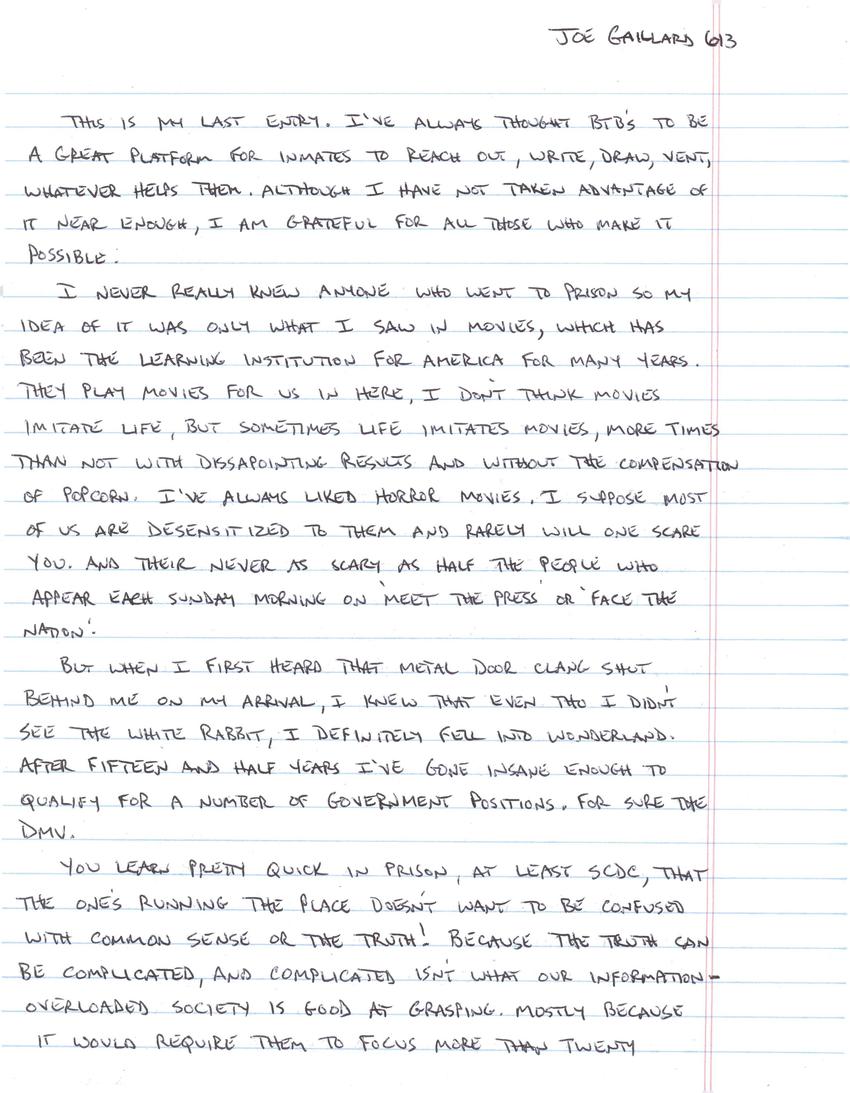 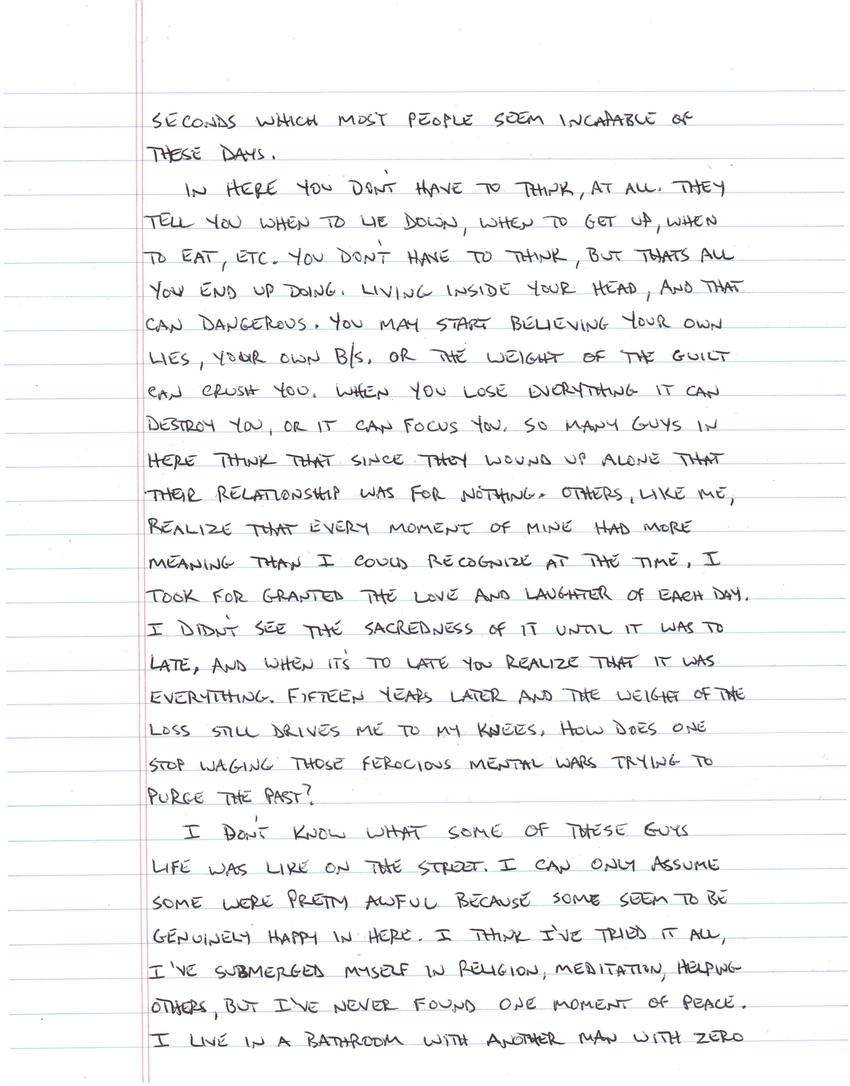 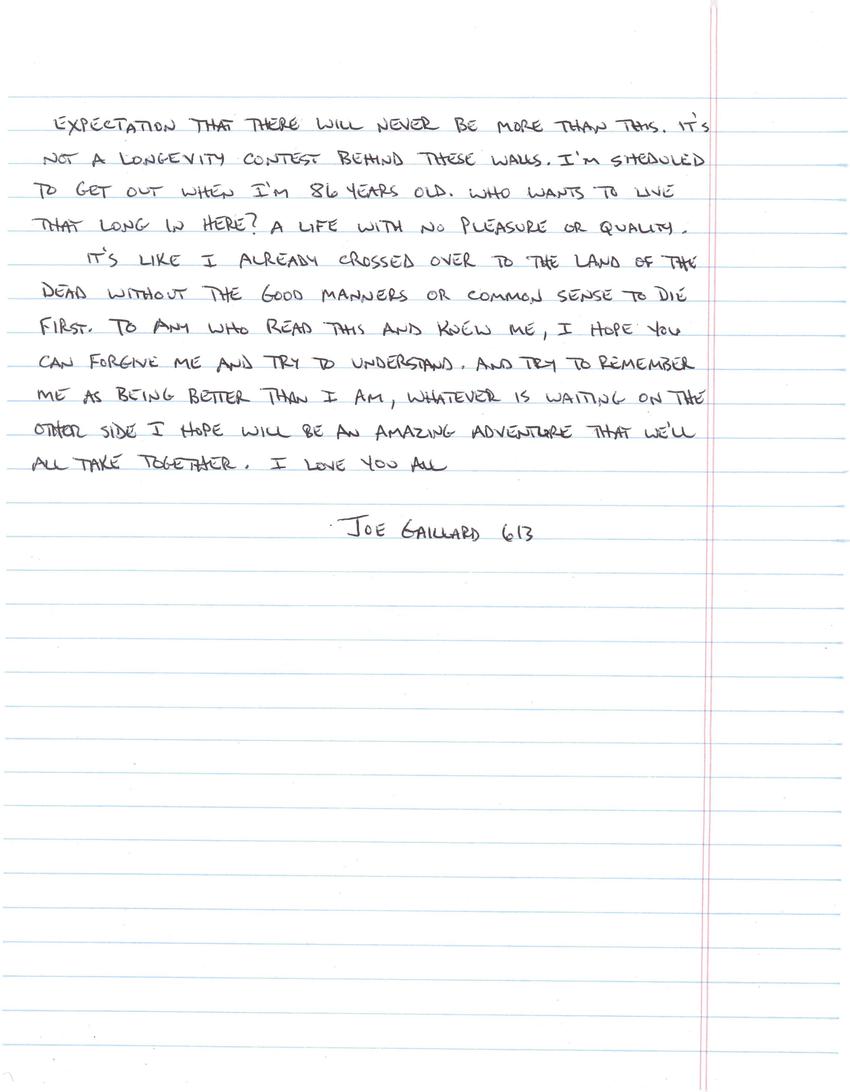 This is my last entry. I've always thought BTB to be a great platform for inmates to reach out, write, draw, vent—whatever helps them. Although I have not taken advantage of it near enough, I am grateful for all those who make it possible.

I never really knew anyone who went to prison, so my idea of it was only what I saw in movies, which has been the learning institution for American for many years. They play movies for us in here. I don't think movies imitate life, but sometimes life imitates movies—more times than not with disappointing results and without the compensation of popcorn. I've always liked horror movies. I suppose most of us are desensitized to them and rarely will one scare you. And they're never as scary as half the people who appear each Sunday morning on Meet the Press or Face the Nation.

But when I first heard that metal door clang behind me on my arrival, I knew that even though I didn't see The White Rabbit, I definitely fell into Wonderland. After fifteen and a half years, I've gone insane enough to qualify for a number of government positions. For sure, the DMV.

You learn pretty quick in prison—at least SCDC—that the ones running the place don't want to be confused with common sense or the truth! Because the truth can be complicated, and complicated isn't what our information-overloaded society is good at grasping. Mostly because it would require them to focus more than twenty seconds, which most people seem incapable of these days.

When you lose everything, it can destroy you or it can focus you. So many guys in here think that, since they wound up alone, their relationship was for nothing. Others, like me, realize that every moment of mien had more meaning than I could recognize at the time. I took for granted the love and laughter of each day. I didn't see the sacredness of it until it was too late. When it's too late, you realize that it was everything. Fifteen years later, and the weight of the loss still drives me to my knees.

How does one stop waging those ferocious mental wars, trying to purge the past? I don't know what some of these guys' lives were like on the street. I can only assume some were pretty awful because some seem to be genuinely happy in here.

I think I've tried it all. I've submerged myself in religion, meditation, helping others. But I've never found one moment of peace. I live in a bathroom with another man with zero expectations that there will never be more than this. It's not a longevity contest behind these walls.

I'm scheduled to get out when I'm 86 years old. Who wants to live that long in here? A life with no pleasure or quality. It's like I already crossed over to the land of the dead without the good manners or common sense to die first.

To any who read this and knew me, I hope you can forgive me and try to understand. And try to remember me as being better than I am. Whatever is waiting on the other side I hope will be an amazing adventure that we'll all take together. I love you all

Dear Joe, I was sorry to read this was your final post. I find your writing to be well-spoken, articulate, informative, and entertaining. Think of this Joe, if your writing influenced one single person, just one, to change their path, your ministry is successful. Think of the power in your words! Your suffering is real, and it moves my heart. America needs criminal justice system reform so very badly, and some horrors of it would never see the light of day without forums like BTB, and inmates who demonstrate their vulnerability by sharing them. Just one Joe, if you only influenced just one, your pain is not in vain. Please reconsider your position and continue to fight for life, even a life that seems so full of pain and sorrow. You will find moments of joy, even if only a moment, with eyes wide open. It is true you have passed into a system without meaning and full of venom and hate. But you have not been abandoned, tonight I will pray you find some moments of joy. I write this in all sincerity. John
Hey Joe,
I tried months ago to get hold of you but my letter came back. I use to work with you. My name is Gene Searcy and I worked in the same dept. as you. I worked with Herman S. and I always like hearing biblical words of wisdom from you. Just wanted to get in touch with you. I hope you are well. Get back in touch. Eugene