Response To A Friend 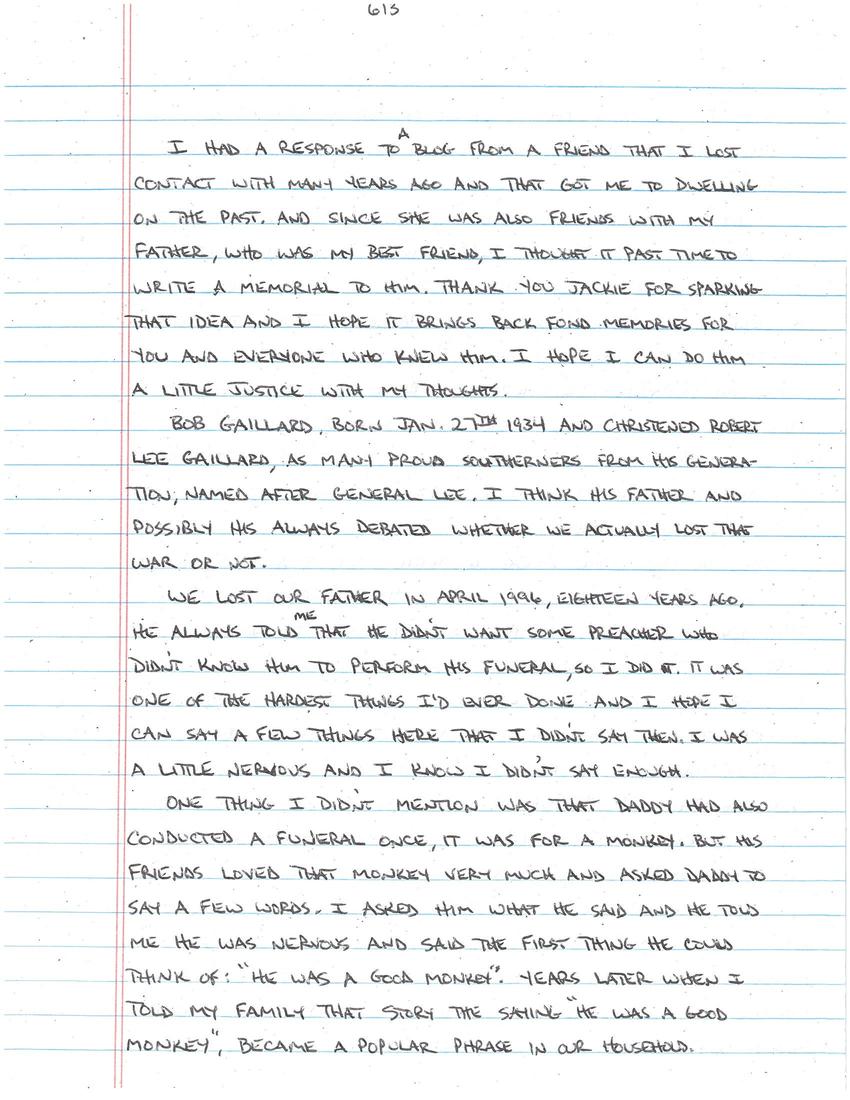 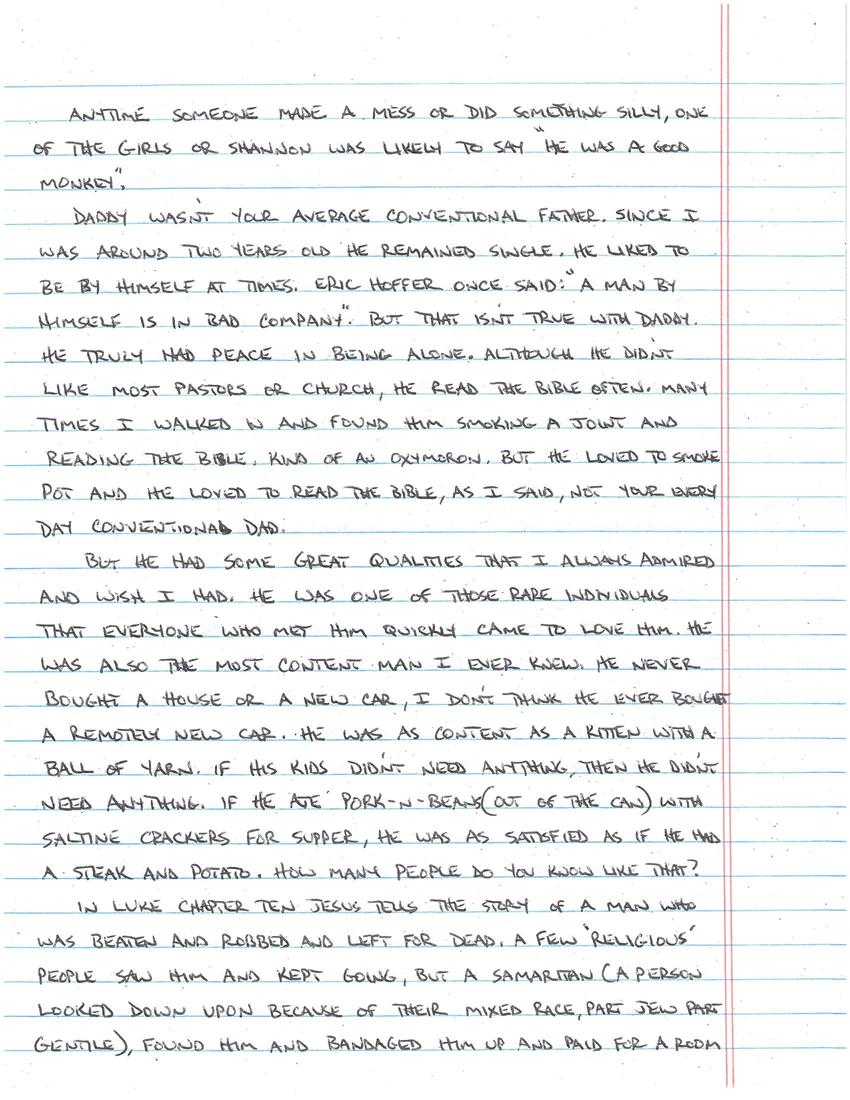 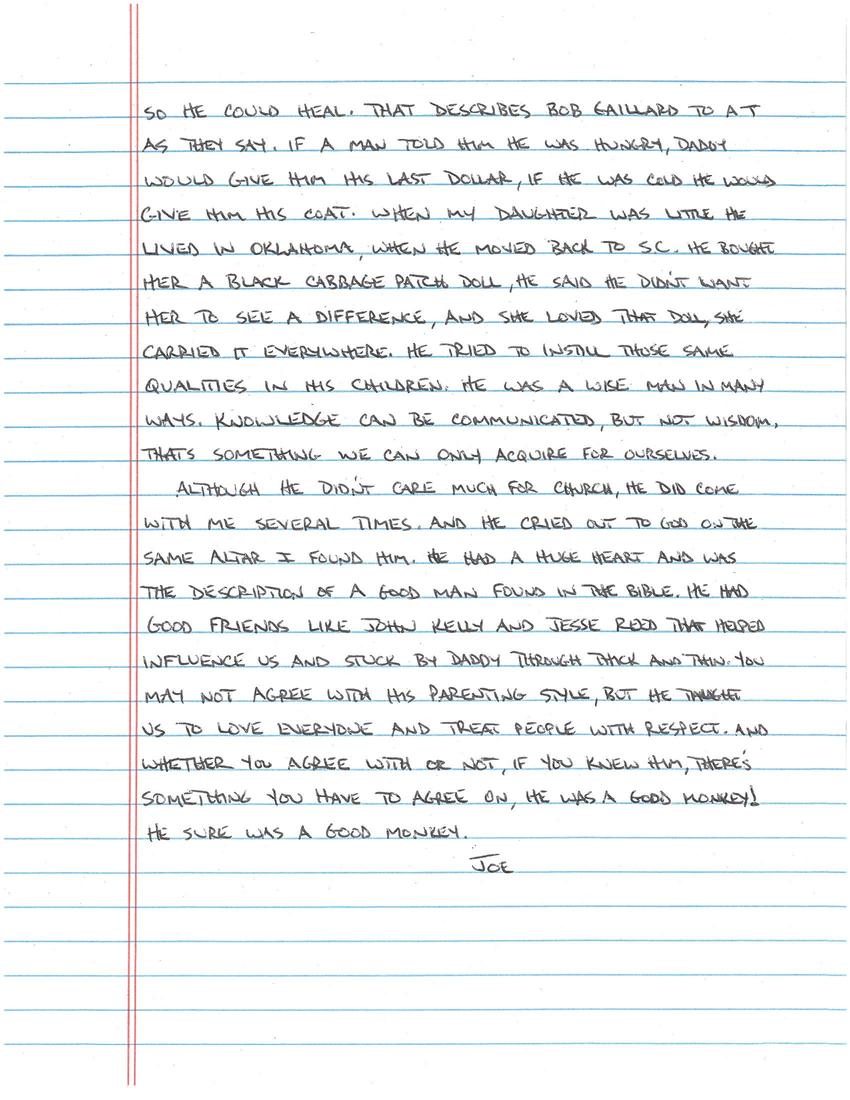 I had a response to a blog from a friend that I lost contact with many years ago and that got me to dwelling on the past and since she was also friends with my father, who was my best friend, I thought it past time to write a memorial to him. Thank you Jackie, for sparking that idea and I hope it brings back fond memories for you and everyone who knew him. I hope I can do him a little justice with my thoughts.

Bob Gaillard, born Jan. 27th 1934 and christened Robert Lee Gaillard, as many proud southerners from his generation, named after General Lee. I think his father and possibly debated whether we actually lost that war or not.

We lost our father in April 1996, eighteen years ago. He always told me that he didn't want some preacher who didn't know him to perform his funeral, so I did it. It was one of the hardest things I'd ever done and I hop I can say a few things here that I didn't say then. I was a little nervous and I know I didn't say enough.

One thing I didn't mention was that daddy had also conducted a funeral once, it was for a monkey. But his friends loved that monkey very much and asked daddy to say a few words. I asked him what he said and he told me he was nervous and said the first thing he could think of: "He was a good monkey". Years later when I told my family that story the saying "He was a good monkey", became a popular phrase on our household.

Anytime someone made a mess or did something silly, one of the girls or Shannon was likely to say "He was a good monkey".

Daddy wasn't your average conventional father. Since I was around two years old he remained single. He like to be by himself at times. Eric Hoffer once said: "A man by himself is in bad company". But that isn't true with daddy. he truly had peace in being alone. Although he didn't like most pastors or church, he read the Bible often. Many times I walked in and found him smoking a joint and reading the Bible, kind of an oxymoron. But he loved to smoke pot and he loved to read the Bible, as I said, not your everyday conventional dad.

But he had some great qualities that I always admired and wish I had. He was one of those rare individuals that everyone who met him quickly came to love him. He was also the most content man I ever knew. he never bought a house or a new car, I don't think he ever bought a remotely new car. He was as content as a kitten with a ball of yarn. If his kids didn't need anything, the he didn't need anything. If he ate pork-n-beans (out of the can) with saltine crackers for supper, he was satisfied as if he had a steak and potato. How many people do you know like that?

In Luke Chapter Ten, Jesus tells the story of a man who was beaten and robbed and left for dead. A few "religious" people saw him and kept going, but a Samaritan (a person looked down upon because of their mixed race, part Jewish part Gentile), found him and bandaged him up and paid for a room so he could heal. That describes Bob Gaillard to a T, as they say. If a man told him he was hungry, daddy would give him his last dollar, if he was cold he would give him his coat. When my daughter was little he lived in Oklahoma, when he moved back to S.C. he bought her a black cabbage patch doll, he said he didn't want her to see a difference, and she loved that doll, she carried it everywhere. He tried to instill those same qualities in his children. He was a wise man in many way. Knowledge can be communicated, but no wisdom, that something we can only acquire for ourselves.

Although he didn't care much for church, he did come with me several times. And he cried out to God on the same altar I found him. he had a huge heart and was the description of a good man found in the Bible. He had good friends like John Kelly and Jesse Reed that helped influence us and stuck by daddy through thick and thin. You may not agree with his parenting style, but he taught us to love everyone and treat people with respect. And whether you agree or not, if you knew him, there's something you have to agree on, he was a good monkey! He sure was a good monkey.

Joe you did an excellent job describing your Daddy, He sure never cared for material things, but he did buy one new car when he got out of the Navy he bought a 1956 Chevy. You did a great job at his funeral as well as in this blog. He was a good monkey!
I love you Joe
Mom
Your a good monkey too Joe, a good monkey.