The Chronicle Of My Life 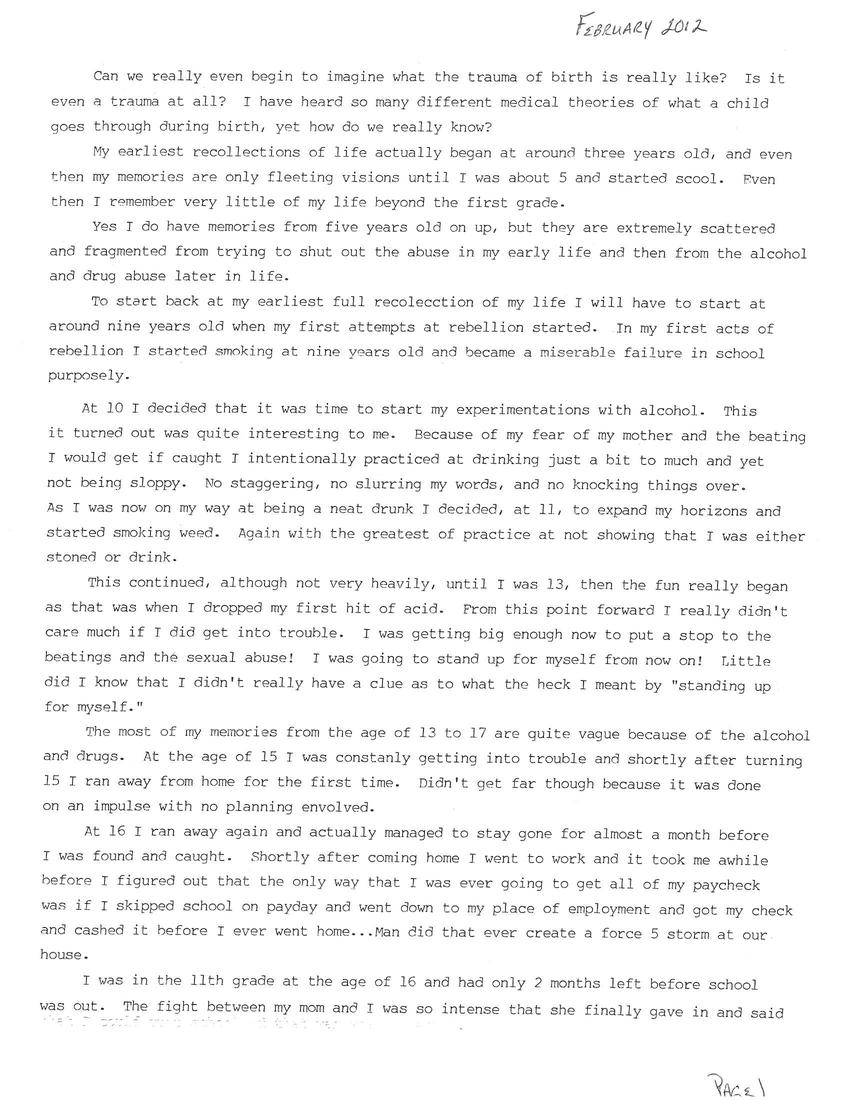 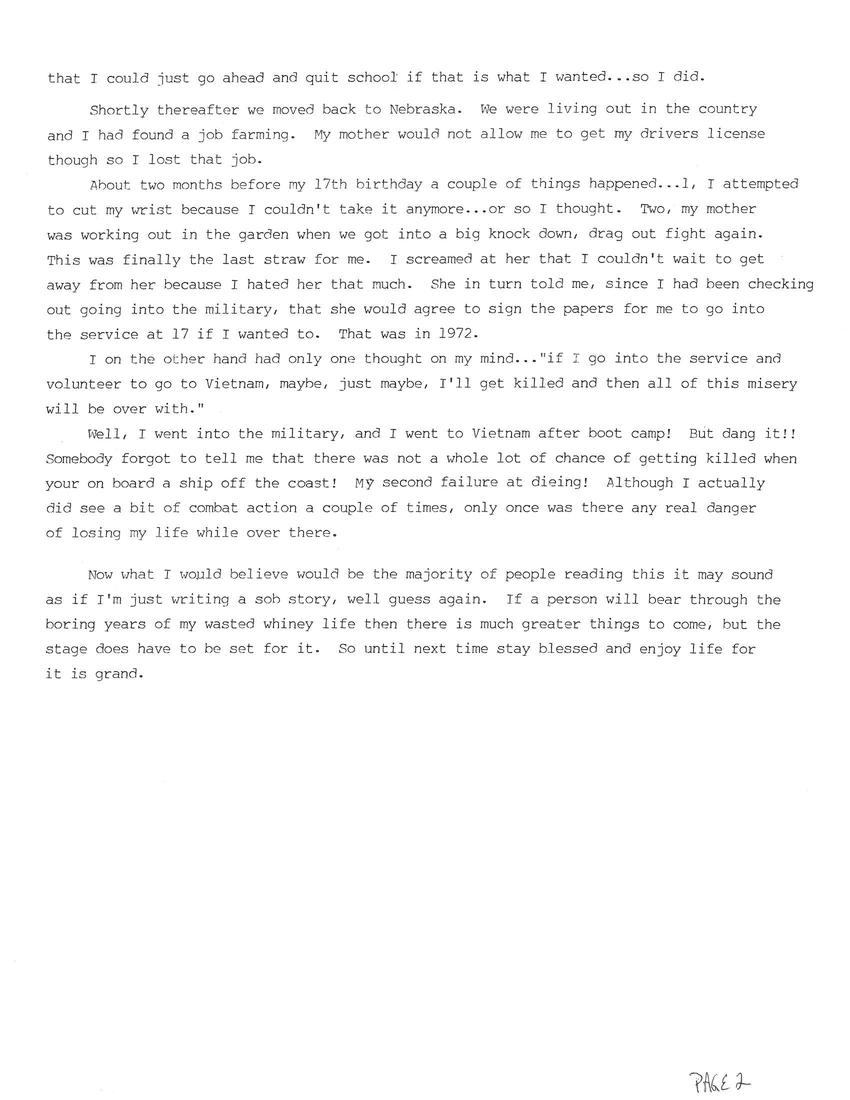 Can we really even begin to imagine what the trauma of birth is really like? Is it even a trauma at all? I have heard so many different medical theories of what a child goes through during birth, yet how do we really know?

My earliest recolections of life actually began at around three years old, an even then my memories are only fleeting visions untl I was about 5 and started school. Even then I remember very little of my life beyond the first grade.

Yes I do have memories from five years old on up, but they are extemely scattered and fragmented from trying to shut out the abuse in my early life and then for the alcohol and drug abuse later in life.

To start back at my earliest full recollection of my life I will have to start at around nine years old when my first attempts at rebellion started. In my first acts of rebellion I started smoking at nine years old and became a miserable failure in school purposely.

At 10 I decided that it was time to start my experimntations with alcohol. This it turned out was quite interesting to me. Because of my fear of my mother and the beating I would get if caught I intentionally practiced at drinking just a bit to much and yet not being sloppy. No staggering, no slurring my words, and no knocking things over. As I was now on my way at being a neat drunk I decided, at 11, to expand my horizons and started smoking weed. Again with the greatest of practice at not showing that I was either stoned or drunk.

This continued, although not very heavily,until I was 13, then the fun really began as that was when I dropped my first hit of acid. From, this point forward I really didn't care much if I did get into trouble. I was getting big enough now to put a stop to the beatings and the sexual abuse! I was going to stand up for myself from now on! Little did I know that I didn't really have a clue as to what the heck I meant by "standing up for myself."

The most of my memories from the age of 13 to 17 are quite vague because of the alcohol and drugs. At the age of 5 I was constantly getting into trouble and shortly after turning 15 Iran away from home for the first time. Didn't get far though because it was done on an impulse with no planning involved.

At 16 I ran saway again and actually managed to stay gone for almost a month before I was found and caught. Shortly after coming home I went to work and it took me awhile before I figured out that the only way that I was ever going to get all of my paycheck was if I skipped school on payday and went down to my place of employment and got my check and cashed it before I ever went home,,, Man di that ever create a force 5 storm at our house.

I was in the 11th grade at the age of 16 and had only 2 months left before school was out. The fight between my Mum and I was so intense that she finally gave in and said that I could just go ahead and quit school if that is what I wanted...so I did.

Shortly thereafter we moved back to Nebraska. We were living out in the country and I had found a job farming. My mother would not allow me to get drivers license though so I lost that job.

About two months before my 17th birthday a couple of things happened... I attempted to cut my wrist because I couldn't take it anymore...or so I thought. Two, m mother was working out in the garden when we got into a big knock down, drag out fight again. This was finally the last straw for me. I screamed at her that I couldn't wait to get away from her because I hated her tha tmuch. She in turn told me, since I had been checking out going into the military, that she would agree to sign the papers for me to go into the service at 17 if I wanted to. That was in 1972.

I on the other hand had only one though on my mind..."if I go into the service and volunteer to go to Vietnam, maybe, just maybe, I'll get killed and then all of this misery will be over with,"

Well, I went into the miltary, and I went to Vietnam after boot camp! But dang it!! Somebody forgot to tell that there was not a whole lot of chance of getting killed when your on board a ship off the coast! My second failure at dieing! Although I actually did see a bit of comat action a couple of times, only once waa there any real danger of losing my life while over there.

Now what I would believe would be the majority of people reading this it may sound as if I'm just writing a sob story, well guess again. If a person will bear through the boring years of my wasted whiney life then there is much greater things to come, but the stage does have to be set for it. So until next time stay blessed and enjoy life for it is grand.