Supreme Court Of The United State 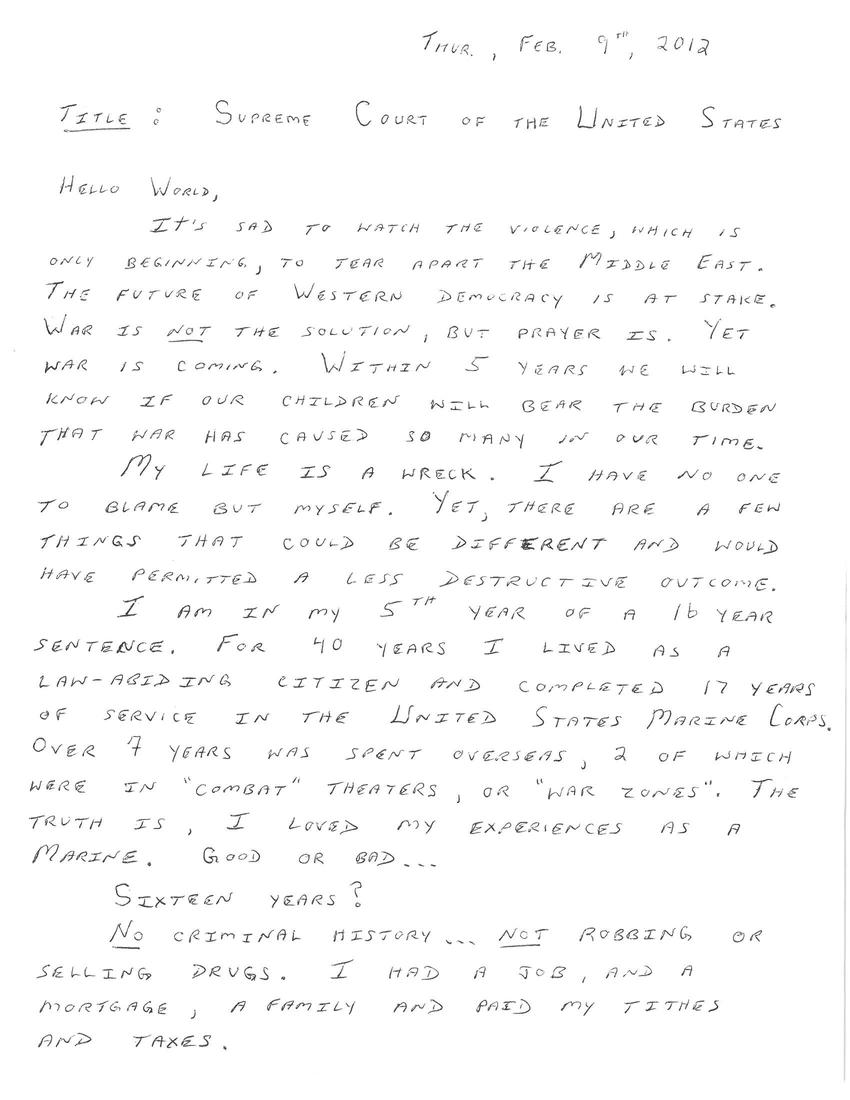 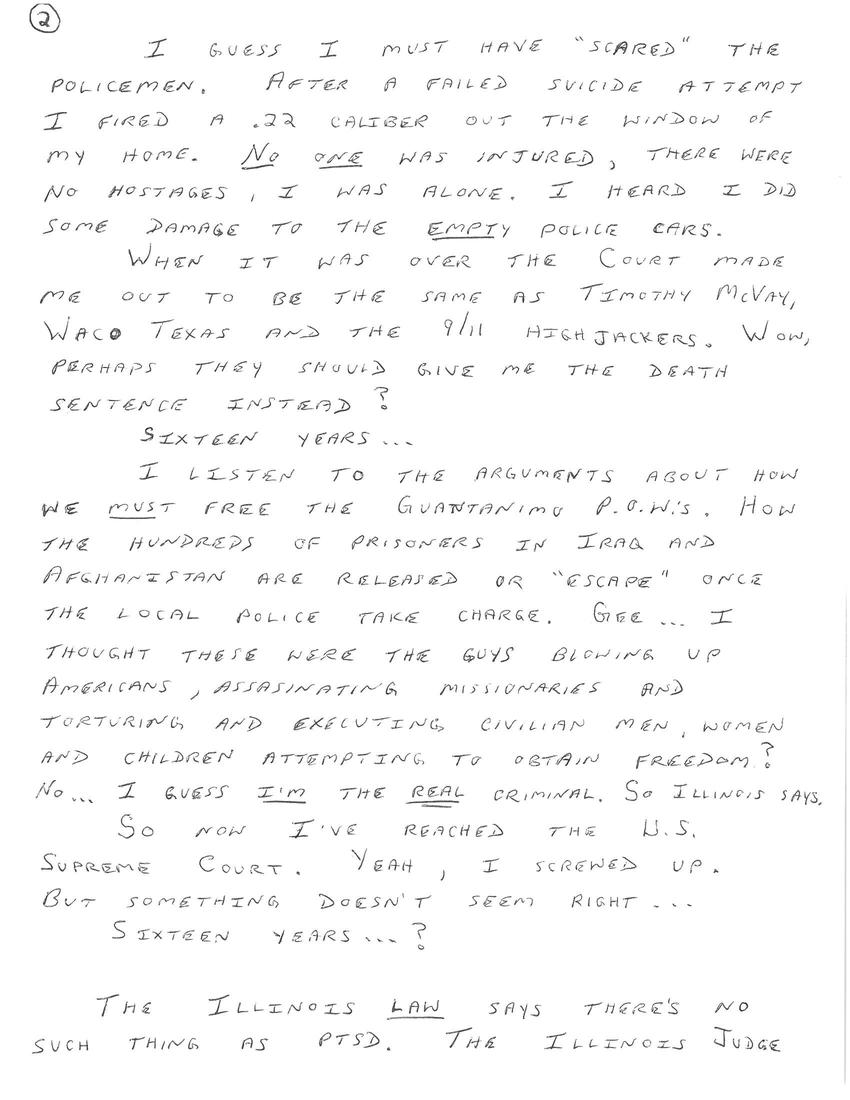 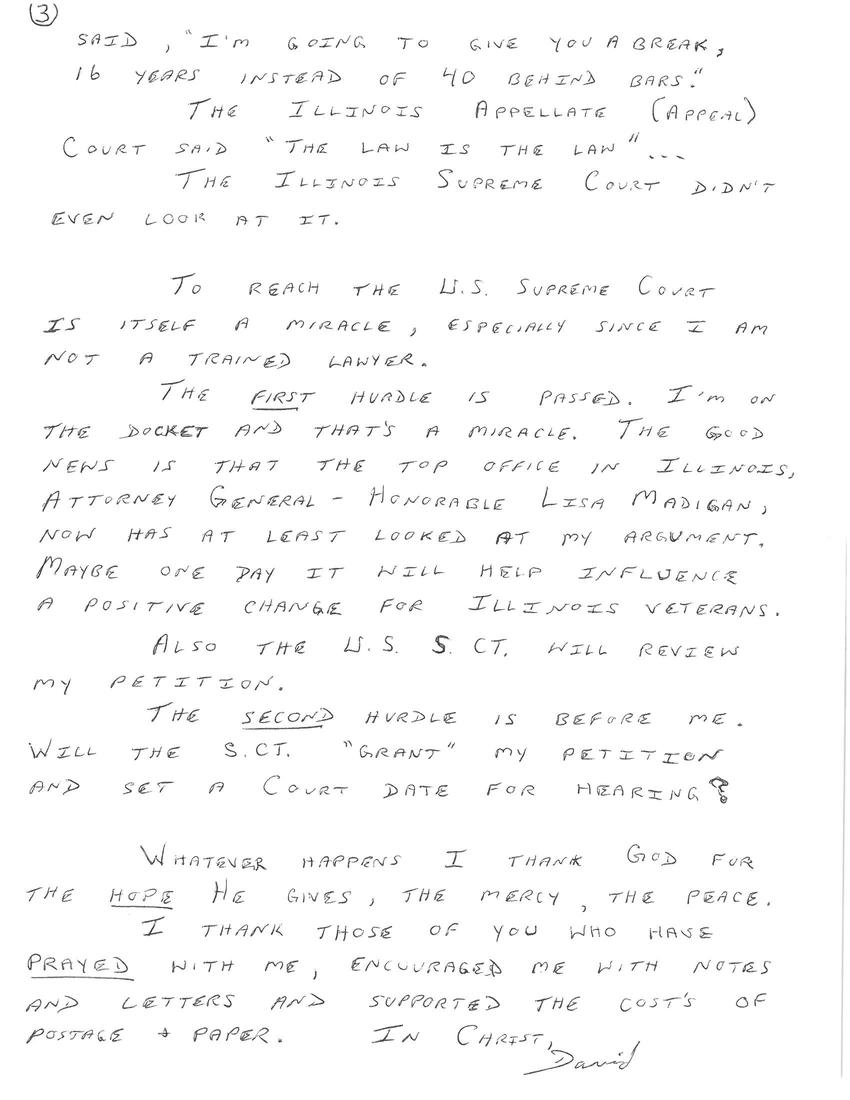 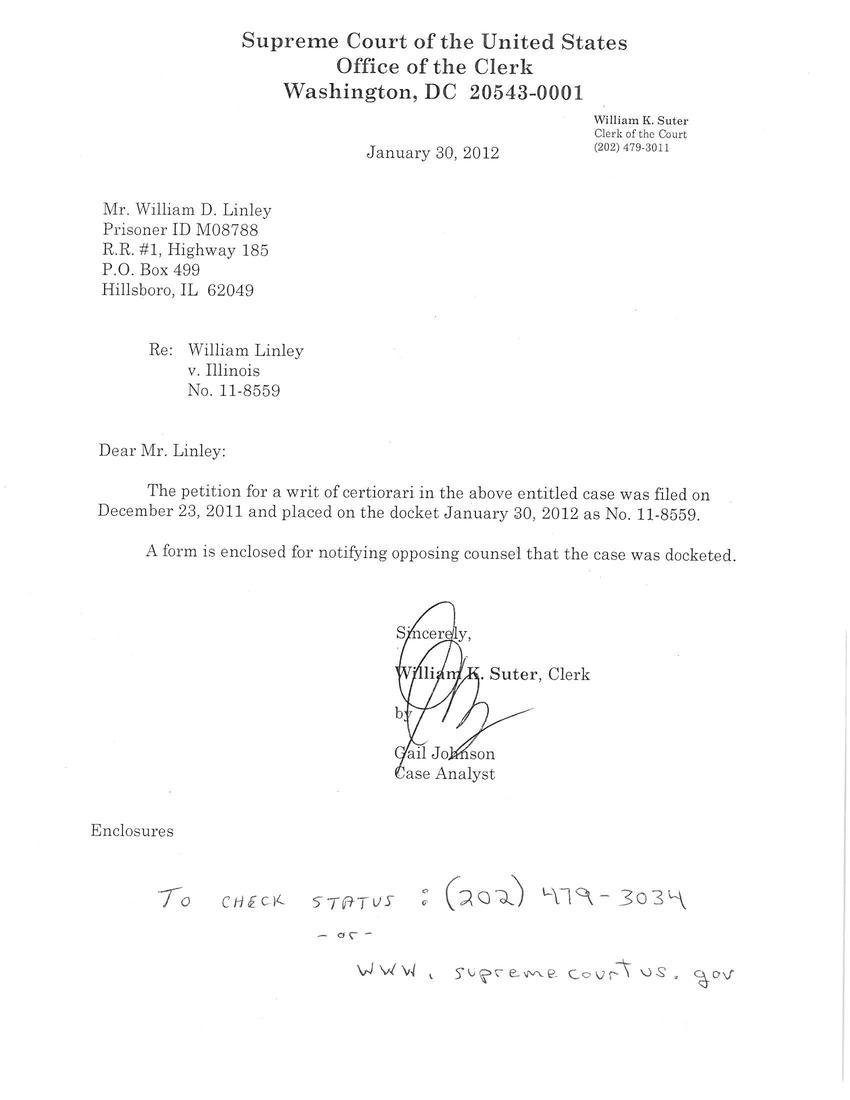 It's sad to watch the violence, which is only beginning, to tear apart the Middle East. The future of Western democracy is at stake. War is <u>not</u> the solution, but prayer is. Yet war is coming. Within 5 years we will know if our children will bear the burden that war has caused so many in our time.

My life is a wreck. I have no one to blame but myself. Yet, there are a few things that could be different and would have permitted a less destructive outcome.

I am in my 5th year of a 16 year sentence. For 40 years I lived as a law-abiding citizen and completed 17 years of service in the United States Marine Corps. Over 7 years was spent overseas, 2 of which were in "combat" theaters, or "war zones". The truth is, I loved my experiences as a Marine. Good or bad...

No criminal history ... Not robbing or selling drugs. I had a job, and a mortgage, a family and paid my tithes and taxes.

I guess I must have "scared" the policemen. After a failed suicide attempt I fired a .22 caliber out the window of my home. No One was injured, there were no hostages, I was alone. I heard I did some damage to the empty police cars.

When it was over the court made me out to be the same as Timothy McVay, Waco Texas and the 9/11 highjackers. Wow, perhaps they should give me the death sentence instead?

I listened to the arguments about how we must free the Guantanimo P.O.W.'s. How the hundreds of prisoners in Iraq and Afghanistan are released or "escape" once the local police take charge. Gee... I thought these were the guys blowing up Americans, assassinating missionaries and torturing and executing civilian men, women and children attempting to obtain freedom? No... I guess I'm the real criminal. So Illinois says.

So now I've reached the U.S. Supreme Court. Yeah, I screwed up. But something doesn't seem right ...

The Illinois appellate (appeal) court said, "The law is the law"...

The Illinois Supreme Court didn't even look at it.

To reach the U.S. Supreme Court is itself a miracle, especially since I am not a trained lawyer.

The first hurdle is passed. I'm on the docket and that's a miracle. The good news is that the top office in Illinois, Attorney General - Honorable Lisa Madigan, now has at least looked at my argument. Maybe one day it will help influence a positive change for Illinois veterans.

Also the U.S. S. Ct. will review my petition.

The second hurdle is before me. Will the S.Ct. "grant" my petition and set a court date for hearing?

Whatever happens, I thank God for the hope He gives, the mercy, the peace.

I thank those of you who have prayed with me, encouraged me with notes and letters and supported the costs of postage & paper.

A form is enclosed for notifying opposin counsel that the case was docketed.

Wow, Sgt Linley, you've been busy! It's always such a great surprise to see you've posted something new in here. I know how hard it is to write individual letters to all of us, so this is a great way to keep us all in the loop on how things are going.

I posted the link to this on our Facebook page and I'm sure the whole platoon is going to be excited about your recent success. We'll keep you in our prayers and keep in touch.

A.B. Siler
This is encouraging news!!! We are behind you 100%. Hoping and praying that you will soon be free!!! Stay strong, Devil Dog!!!

L/cpl Franklin
Dave,
I see people negatively affected by PTSD on a frequent basis; most of them blame their injury for everything. It is very unique and honorable that you take responsibility for your actions. Having said that, anyone who does not think PTSD can make a good person do untypical things is naïve and uninformed. I applaud your perseverance, and it is my hope and prayer that the authorities recognize your faithful service to our nation, that they research PTSD, and they reduce your sentence to parole.

Semper Fi!
Sam
Thanks for writing! I finished the transcription for your post.
(scanned reply – view as blog post)
uploaded May 20, 2012.  Original (PDF) 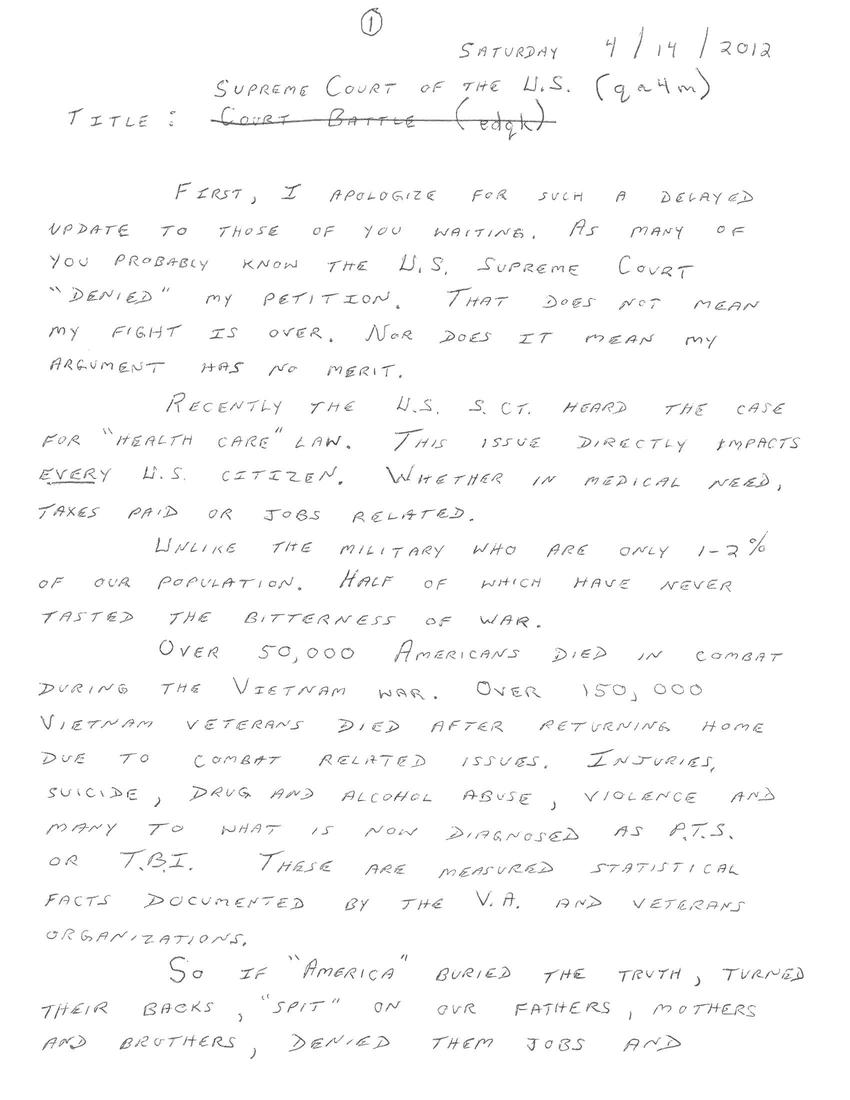 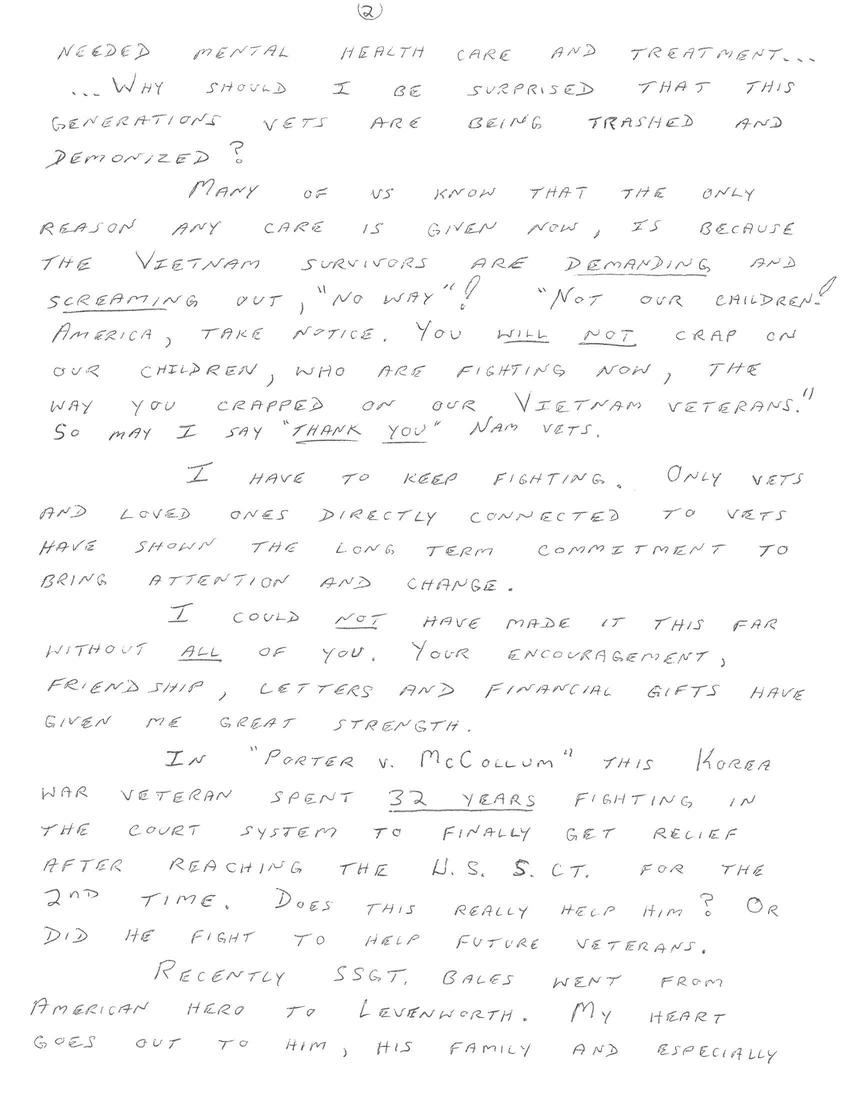 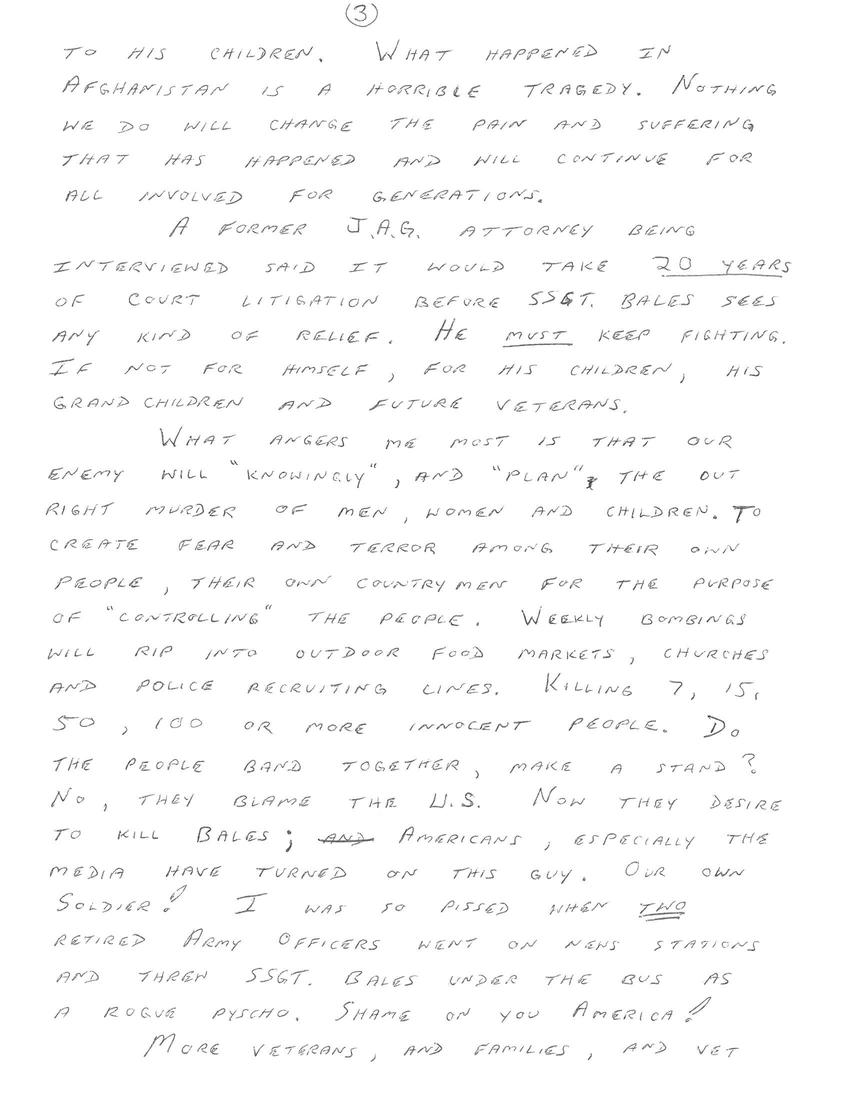 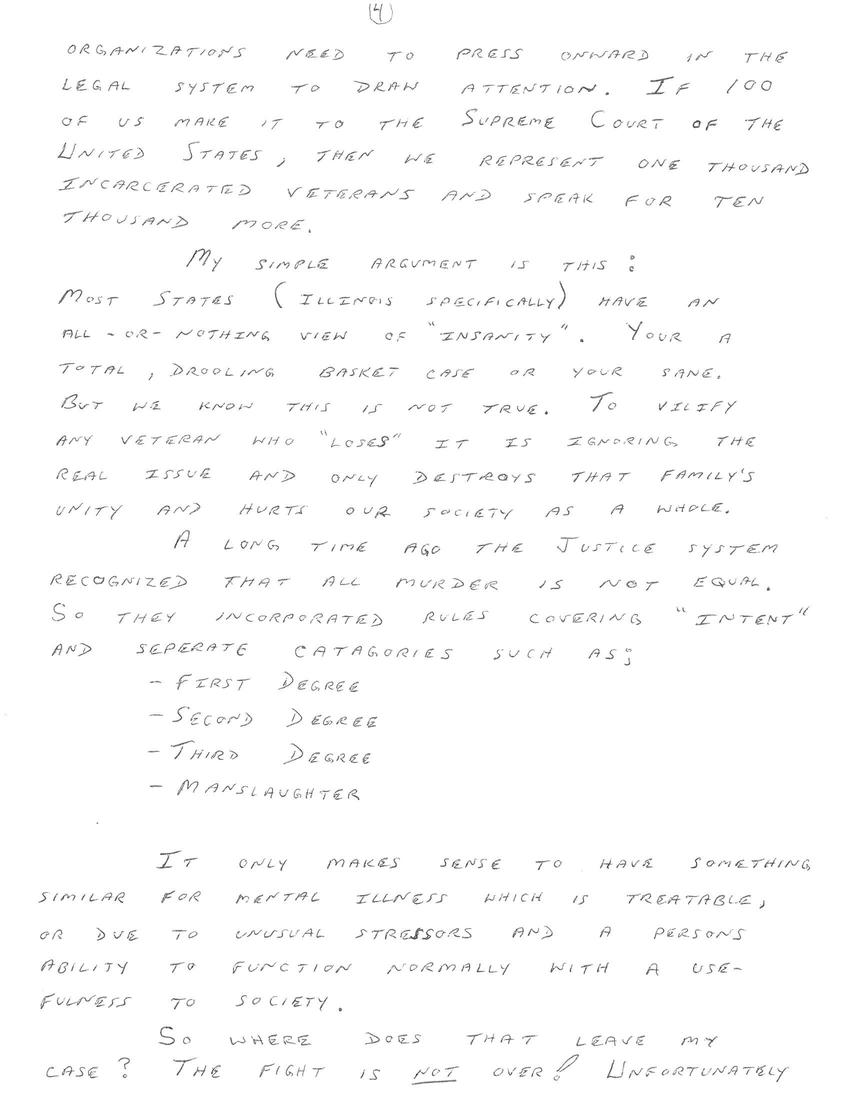 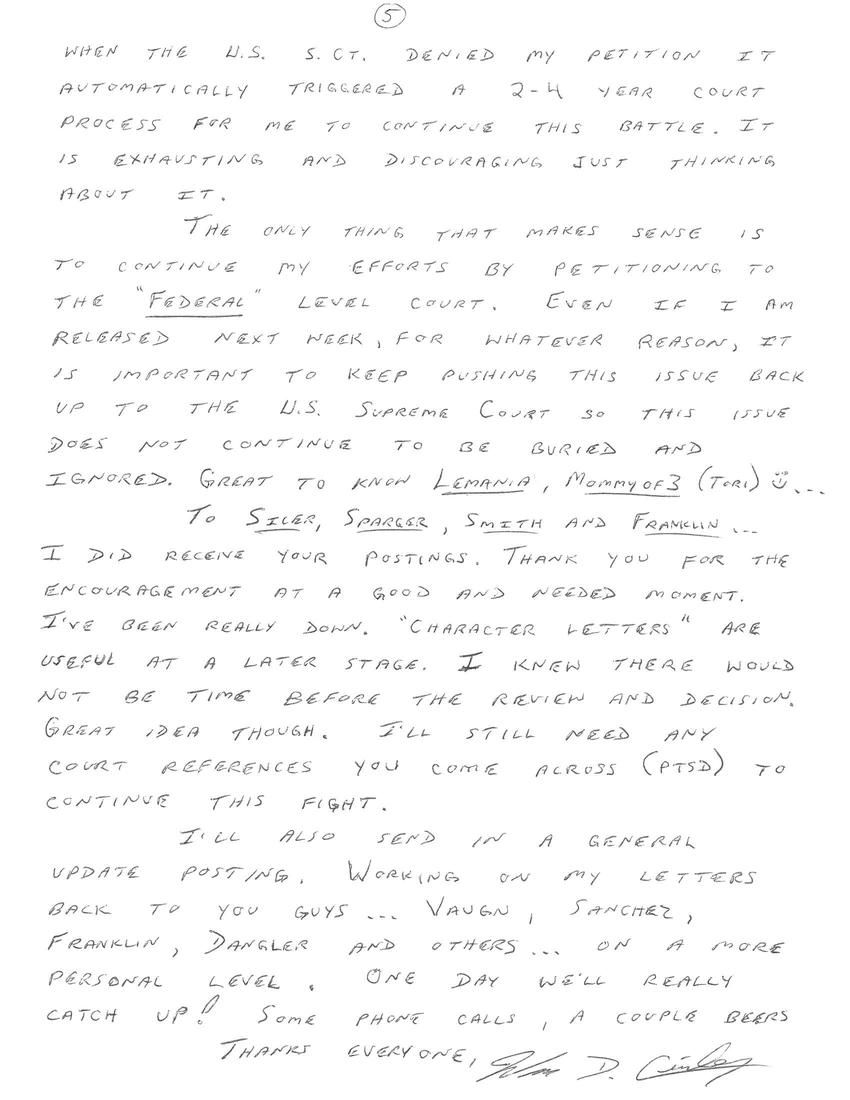