A Message to Wimmin 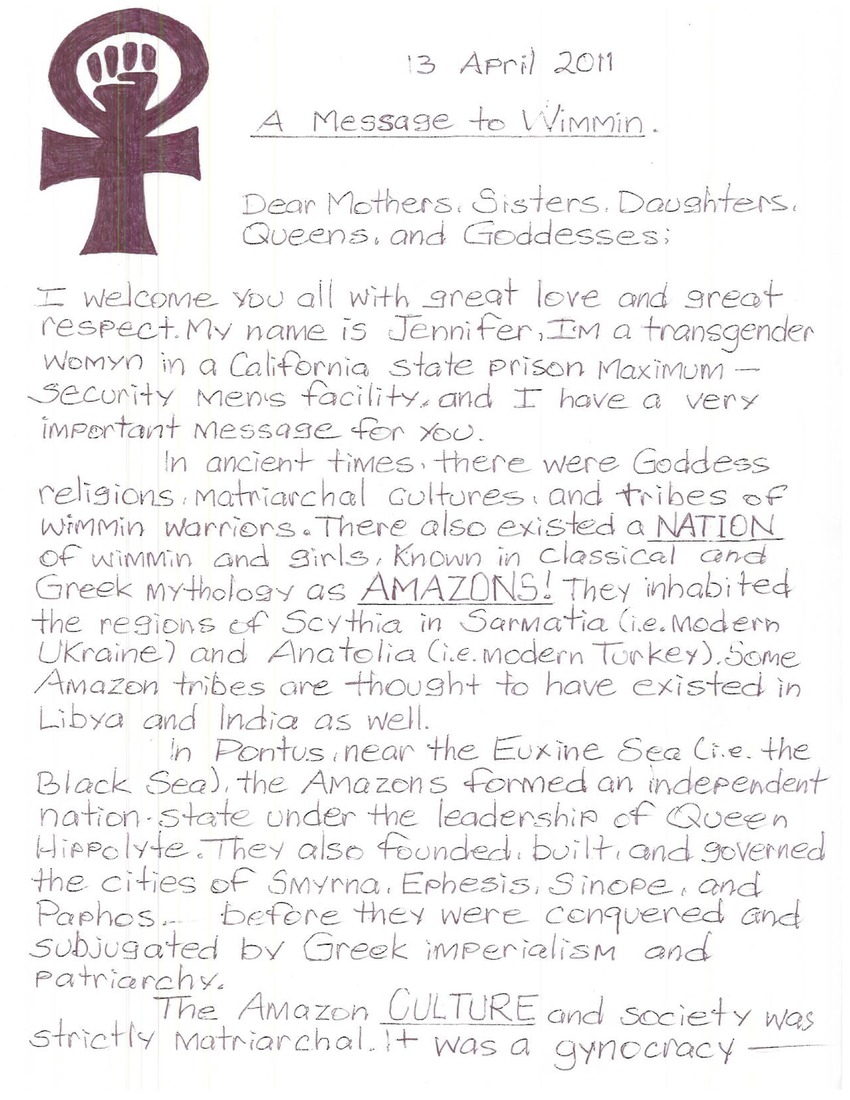 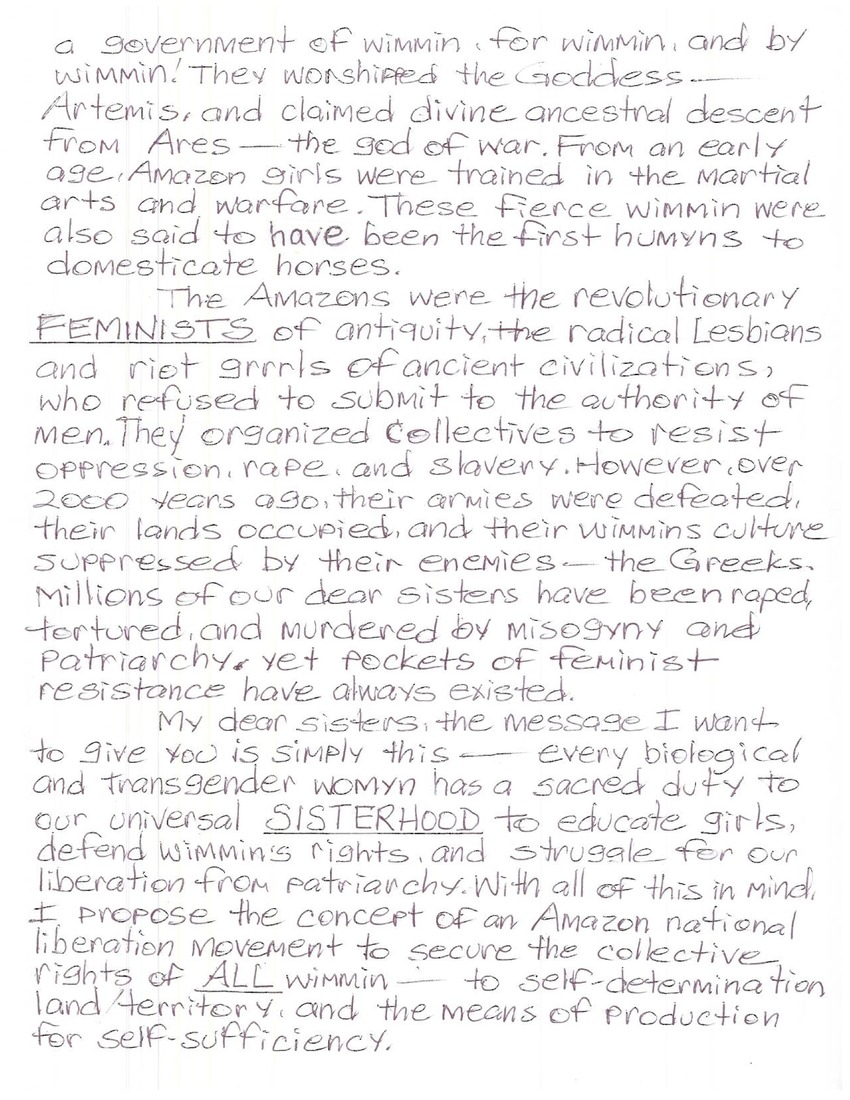 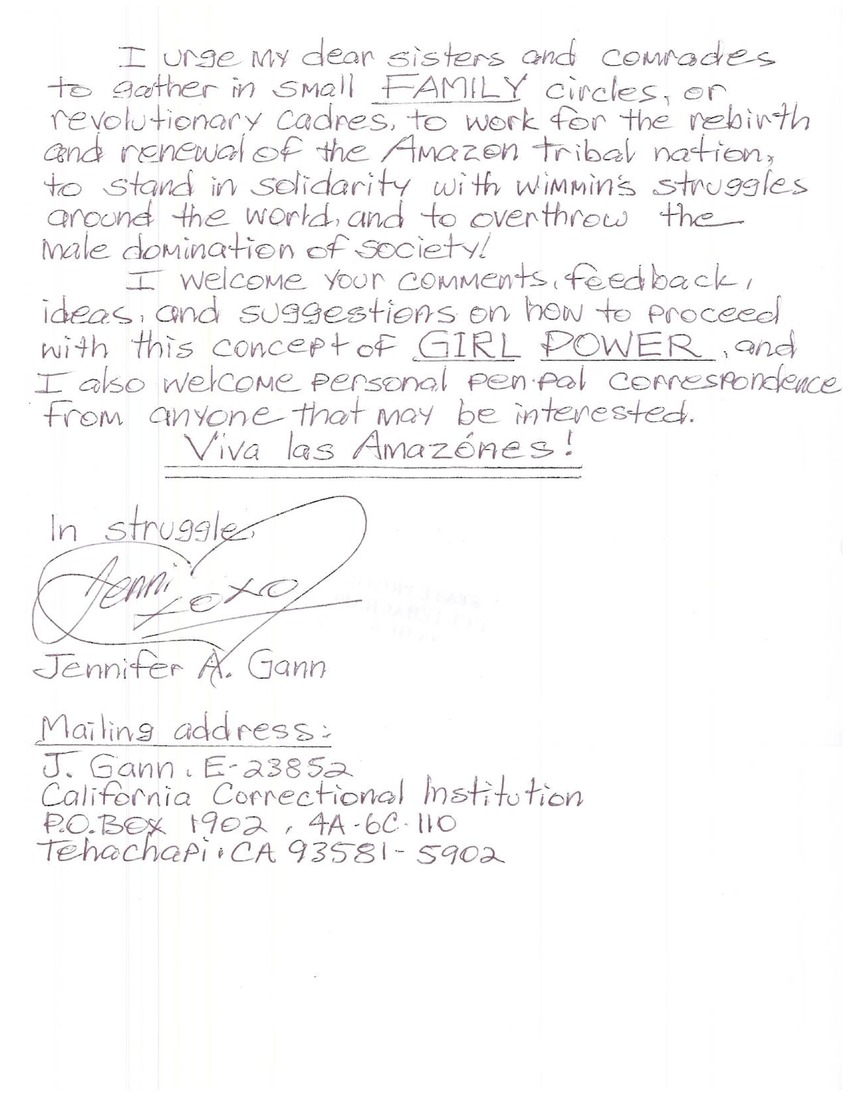 I welcome you all with great love and great respect. My name is Jennifer, I'm a transgender womyn in a California state prison maximum-security men's facility, and I have a very important message for you.

In ancient times, there were goddess religions, matriarchal cultures, and tribes of wimmin warriors. There also existed a NATION of wimmin and girls known in classical and Greek mythology as AMAZONS! They inhabited the regions of Scythia and Sarmatia (modern Ukraine) and Anatolia (modern Turkey). Some Amazon tribes are thought to have existed in Libya and India as well.

In Pontus, near the Euxine sea (the Black Sea), the Amazons formed an independent nation-state under the leadership of Queen Hippolyte. They also founded, built, and governed the cities of Smyrna, Ephesis, Sinope, and Paphos before they were conquered and subjugated by Greek imperialism and patriarchy.

The Amazon CULTURE and society was strictly matriarchal. It was a gynocracy, a government of wimmin, for wimmin, and by wimmin! They worshiped the goddess Artemis and claimed divine ancestral descent from Ares, the god of war. From an early age, Amazon girls were trained in the martial arts and warfare. These fierce wimmin were also said to have been the first humyns to domesticate horses.

The Amazons were the revolutionary FEMINISTS of antiquity, the radical lesbians and riot grrrls of ancient civilizations who refused to submit to the authority of men. They organized collectives to resist oppression, rape, and slavery. However, over 2,000 years ago, their armies were defeated, their lands occupied, and their wimmins culture suppressed by their enemies, the Greeks. Millions of our dear sisters have been raped, tortured, and murdered by misogyny and patriarchy, yet pockets of feminist resistance have always existed.

My dear sisters, the message I want to give you is simply this: every biological and transgender womyn has a sacred duty to our universal SISTERHOOD to educate girls, defend wimmins' rights, and struggle for our liberation from patriarchy. With all of this in mind, I propose the concept of an Amazon national liberation movement to secure the collective rights of ALL wimmin, to self-determination land and territory, and the means of production for self-sufficiency.

I urge my dear sisters and comrades to gather in small FAMILY circles, or revolutionary cadres, to work for the rebirth and renewal of the Amazon tribal nation, to stand in solidarity with wimmin's struggles around the world, and to overthrow the male domination of society.

I welcome your comments, feedback, ideas, and suggestions on how to proceed with this concept of GIRL POWER, and I also welcome personal pen-pal correspondence from anyone who may be interested.

In struggle,
[signature]
Jennifer A. Gann