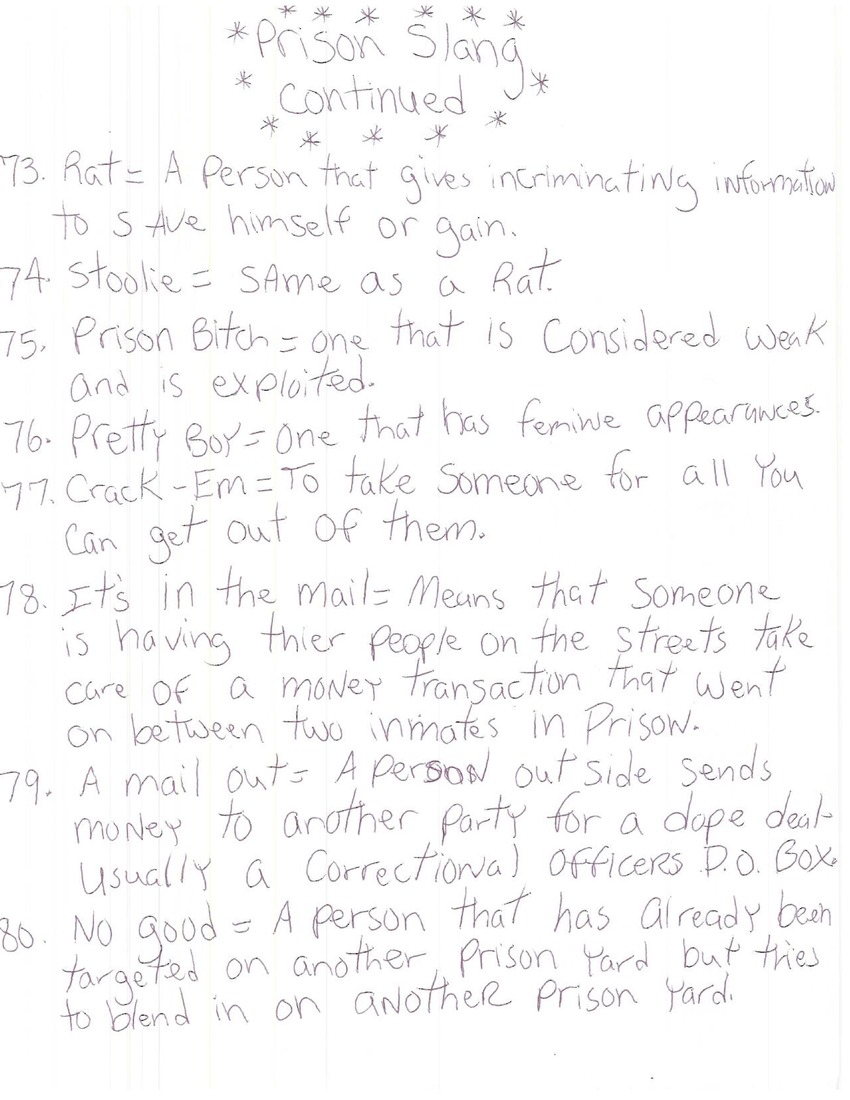 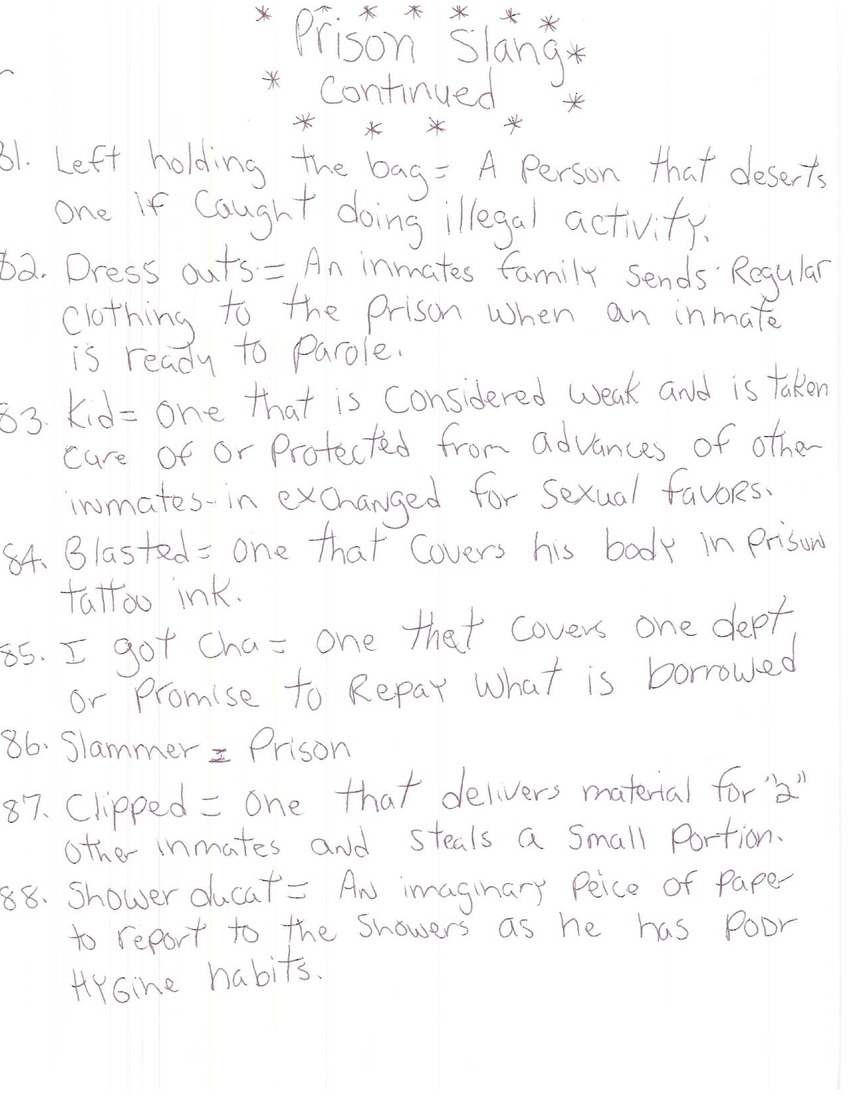 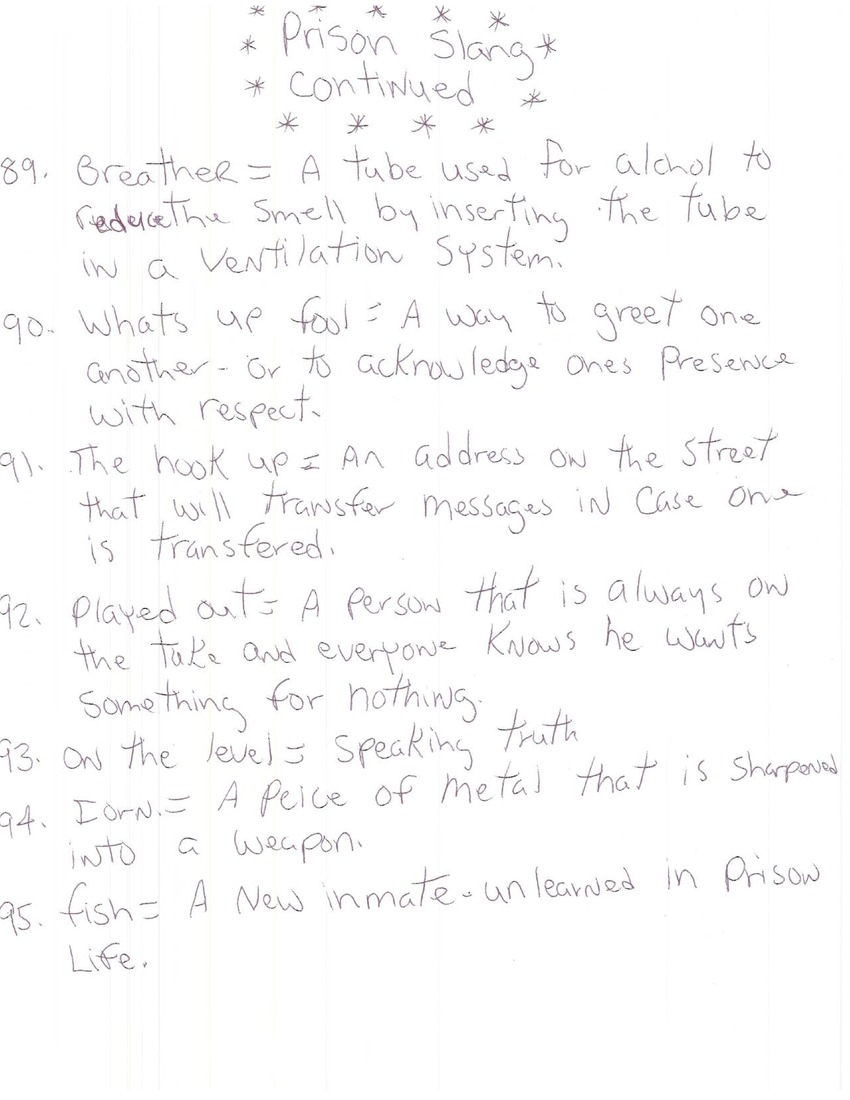 73. Rat = A person that gives incriminating information to save himself or gain.
74. Stoolie = Same as a rat.
75. Prison Bitch = One that is considered weak and is exploited.
76. Pretty boy = One that has feminine appearances.
77. Crack-Em = To take someone for all you can get out of them.
78. It's in the mail = Means that someone is having their people on the streets take care of a money transaction that went on between two inmates in prison.
79. A mail out = A person outside sends money to another party for a dope deal - usually a correctional officer's P.O. Box.
80. No good = A person that has already been targeted on another prison yard but tries to blend in on another prison yard.
81. Left holding the bag = A person that deserts one if caught doing illegal activity.
82. Dress outs = An inmate's family sends regular clothing to the person when an inmate is ready to parole
83. Kid = One that is considered weak and is taken care of or protected from advances of other inmates - in exchange for sexual favors
84. Blaster = One that covers his body in prison tattoo ink.
85. I gotcha = One that covers one debt or promise to repay what is borrowed
86. Slammer = Prison
87. Clipped = One that delivers material for "2" other inmates and steals a small portion.
88. Shower ducat = An imaginary piece of paper to report to the showers as he has poor hygiene habits.
89. Breather = A tube used for alcohol to reduce the smell by inserting the tube in a ventilation system.
90. What's up fool = A way to greet one another - or to acknowledge one's presence with respect.
91. The hook up = An address on the street that will transfer messages in case one is transferred.
92. Played out = A person that is always on the take and everyone knows he wants something for nothing.
93. On the level = Speaking truth
94. Iron = A piece of metal that is sharpened into a weapon.
95. Fish = A new inmate. Unlearned in prison life.