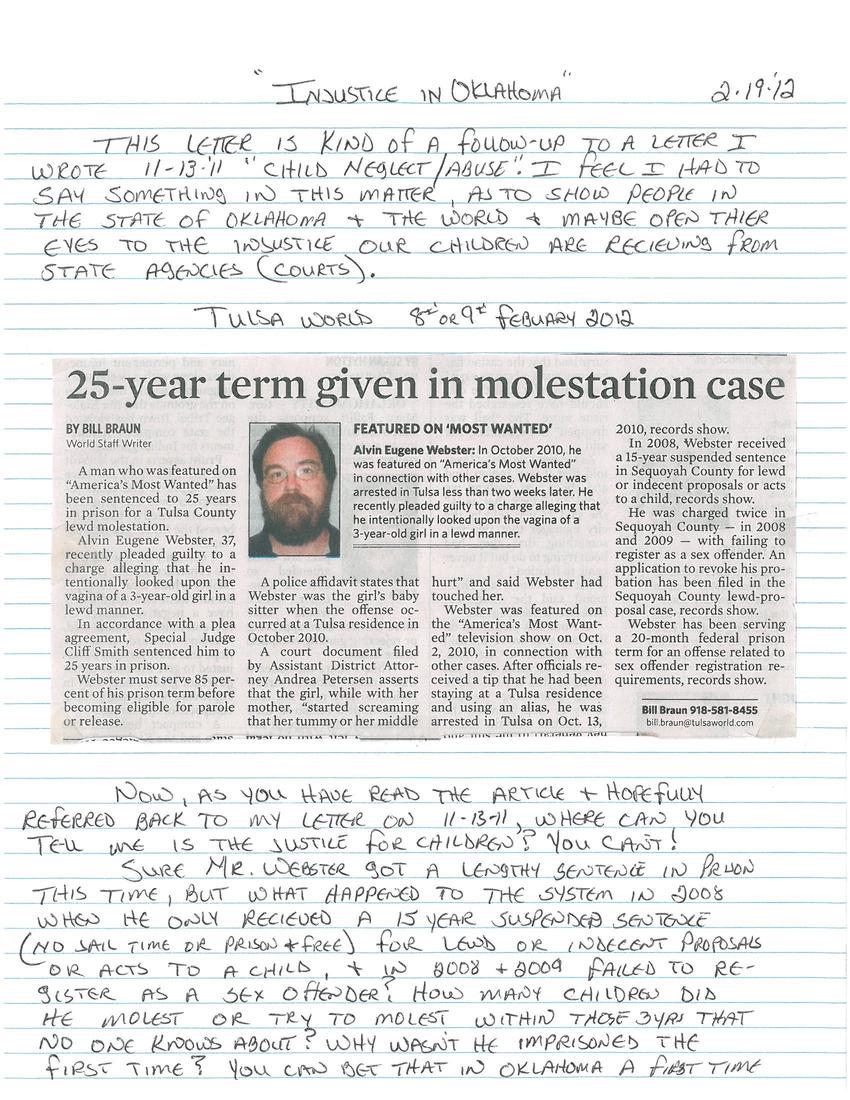 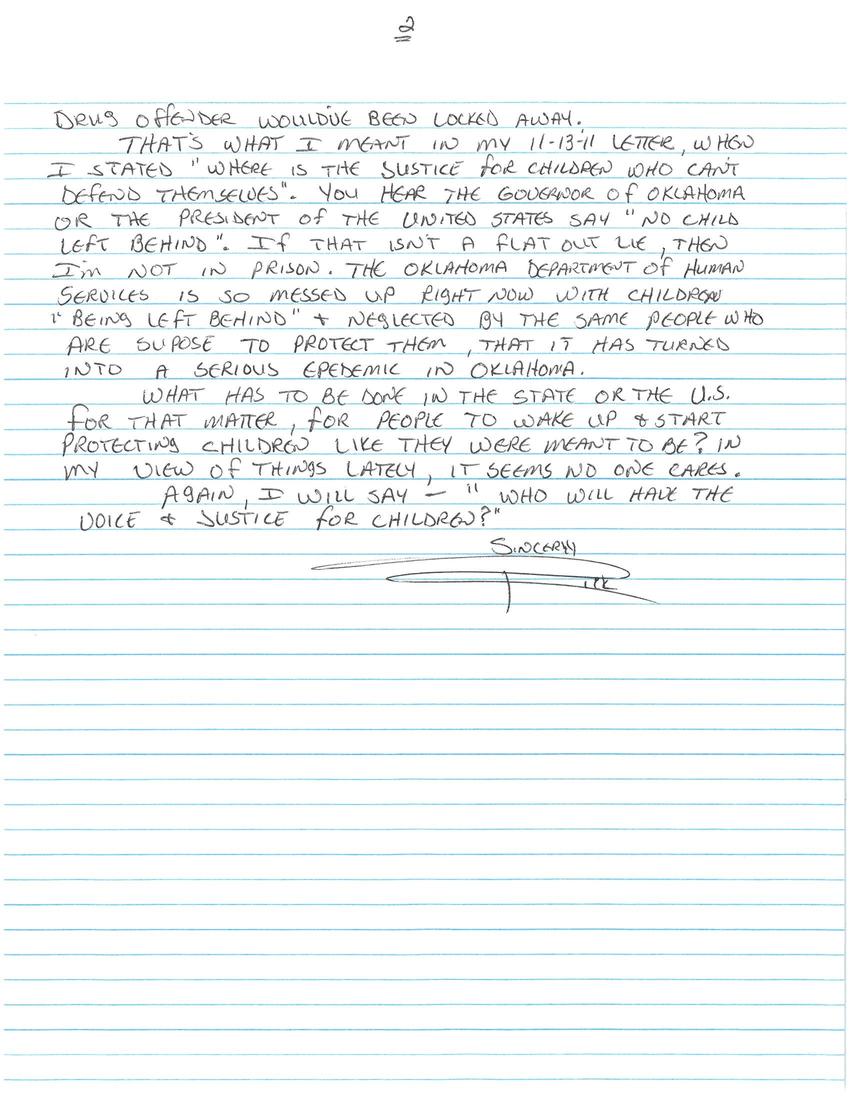 THIS LETTER IS KIND OF A FOLLOW-UP TO A LETTER I WROTE 11-13-11 "CHILD NEGLECT/ABUSE". I FEEL I HAD TO SAY SOMETHING IN THIS MATTER, AS TO SHOW PEOPLEE IN THE STATE OF OKLAHOMA + THE WORLD + MAYBE OPEN THEIR EYES TO THE INJUSTICE OUR CHILDREN ARE RECEIVING FROM STATE AGENCIES (COURTS).

A man who was featured on "America's Most Wanted" has been sentenced to 25 years in prison for a Tulsa County lewd molestation.
Alvin Eugene Webster, 37, recently pleaded guilty to a charge alleging that he intentionally looked upon the vagina of a 3-year-old girl in a lewd manner.
In accordance with a plea agreement, Special Judge Cliff Smith sentenced him to 25 years in prison.
Webster must serve 85 percent of his prison term before becoming eligible for parole or release.

[photo of Alvin Webster] FEATURED ON 'MOST WANTED'
Alvin Eugene Webster: In October 2010, he was featured on "America's Most Wanted" in connection with other cases. Webster was arrested in Tulsa less that two weeks later. He recently pleaded guilty to a charge alleging that he intentionally looked upon the vagina of a 3-year-old girl in a lewd manner.

A police affidavit states that Webster was the girl's baby sitter when the offense occurred at a Tulsa residence in October 2010.
A court document filed by Assistant District Attorney Andrea Petersen asserts that the girl, while with her mother, "started screaming that her tummy or her middle hurt" and said Webster had touched her.
Webster was featured on the "America's Most Wanted" television show on Oct. 2, 2010, in connection with other cases. After officials received a tip that he had been staying at a Tulsa residence and using an alias, he was arrested in Tulsa on Oct. 13, 2010, records show.
In 2008, Webster received a 15-year suspended sentence in Sequoyah County - in 2008 and 2009 - with failing to register as a sex offender. An application to revoke his probation has been filed in the Sequoyah County lewd-proposal case, records show.
Webster has been serving a 20-month federal prison term for an offense related to sex offender registration requirements, records show.

NOW, AS YOU HAVE READ THE ARTICLE + HOPEFULLY REFERRED BACK TO MY LETTER ON 11-13-11, WHERE CAN YOU TELL ME IS THE JUSTICE FOR CHILDREN? YOU CAN'T!
SURE MR. WEBSTER GOT A LENGTHY SENTENCE IN PRISON THIS TIME, BUT WHAT HAPPENED TO THE SYSTEM IN 2008 WHEN HE ONLY RECIEVED A 15 YEAR SUSPENDED SENTENCE (NO SAIL TIME OR PRISON + FREE) FOR LEWD OR INDECENT PROPOSALS OR ACTS TO A CHILD, + IN 2008 + 2009 FAILED TO REGISTER AS A SEX OFFENDER? HOW MANY CHILDREN DID HE MOLEST OR TRY TO MOLEST WITHIN THOSE 3YRS THAT NO ONE KNOWS ABOUT? WHY WASN'T HE IMPRISONED THE FIRST TIME? YOU CAN BET THAT IN OKLAHOMA A FIRST TIME DRUG OFFENDER WOULD'VE BEEN LOCKED AWAY.
THAT'S WHAT I MEANT IN MY 11-13-11 LETTER, WHEN I STATED "WHERE IS THE JUSTICE FOR CHILDREN WHO CAN'T DEFEND THEMSELVES". YOU HEAR THE GOVERNOR OF OKLAHOMA OF THE PRESIDENT OF THE UNITED STATES SAY "NO CHILD LEFT BEHIND"? IF THAT ISN'T A FLAT OUT LIE, THEN I'M NOT IN PRISON. THE OKLAHOMA DEPARTMENT OF HUMAN SERVICES IS SO MESSED UP RIGHT NOW WITH CHILDREN "BEING LEFT BEHIND" + NEGLECTED BY THE SAME PEOPLE WHO ARE SUPPOSE TO PROTECT THEM, THAT IT HAS TURNED INTO A SERIOUS EPIDEMIC IN OKLAHOMA.
WHAT HASS TO BE DONE IN THE STATE OR THE U.S. FOR THAT MATTER, FOR PEOPLE TO WAKE UP + START PROTECTING CHILDREN LIKE THEY WERE MEANT TO BE? IN MY VIEW OF THINGS LATELY, IT SEEMS NO ONE CARES.
AGAIN, I WILL SAY - "WHO WILL HAVE THE VOICE + JUSTICE FOR CHILDREN?"
SINCERELY
[signature]