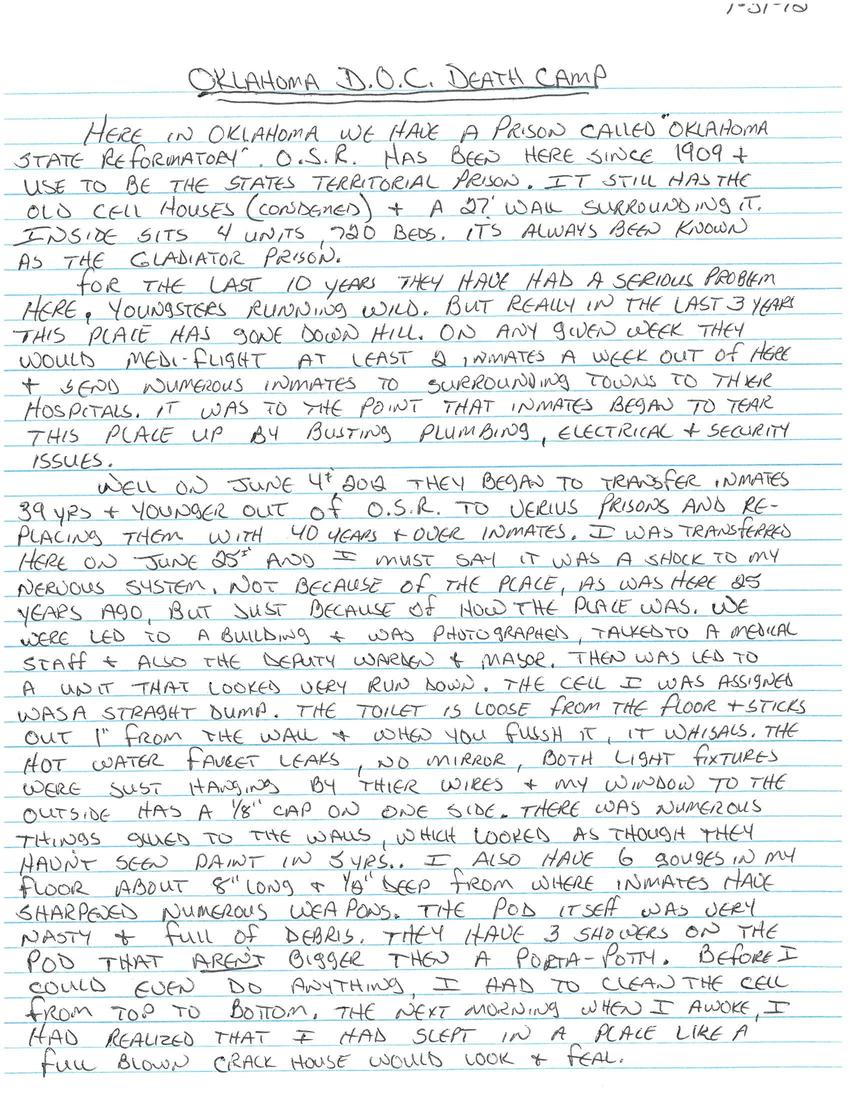 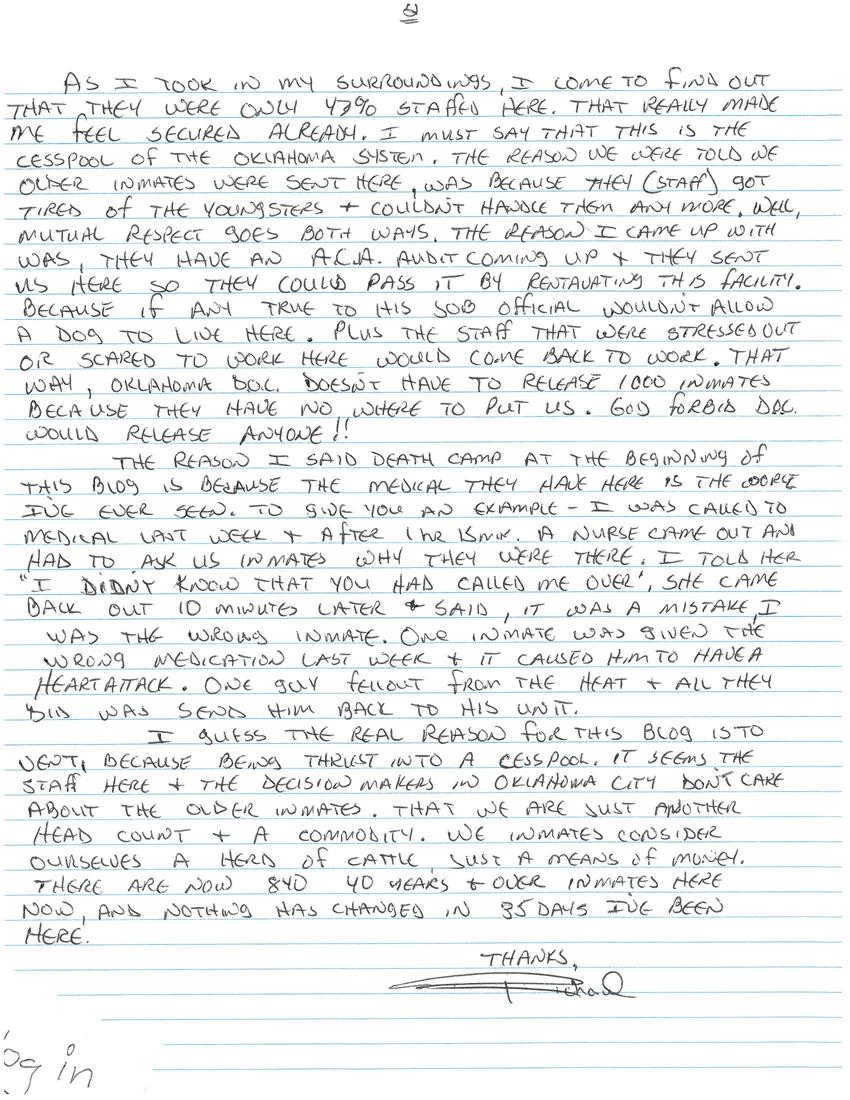 Here in Oklahoma we have a prison called 'Oklahoma State Reformatory'. O.S.R. has been here since 1909 + used to be the states' territorial prison. It still has the old cell houses (condemned) + a 27' wall surrounding it. Inside sits 4 units, 720 beds. It's always been known as the gladiator prison.

For the last 10 years they have had a serious problem here, youngsters running wild. But really in the last 3 years this place has gone down hill. On any given week they would medi-flight at least 2 inmates a week out of here + send numerous inmates to surrounding towns to their hospitals. It was to the point that inmates began to tear this place up b4 busting plumbing, electrical + security issues.

Well on June 4th 2012 they began to transfer inmates 39 yrs + younger out of O.S.R. to various prisons and replacing them with 40 year + over inmates. I was transferred here on June 25th and I must say it was a shock to my nervous system, not because of the place, as was here 25 years ago, but just because of how the place was. We were led to a building + were photographed, talked to a medical staff + also the deputy warden + major. Then was led to a unit that looked very run down. The cell I was assigned was a straight dump. The toilet is loose from the floor + sticks out 1" from the wall + when you flush it, it whistles [?]. The hot water faucet leaks, no mirror, both light fixtures were just hanging by their wires + my window to the outside has a 1/8" gap [?] on one side. There was numerous things glued to the walls, which looked as though they haven't seen paint in 5 years. I also have 6 gauges in my floor about 8" long + 1/2"[?] deep from where inmates half sharpened numerous weapons. The pod itself was very nasty + full of debris. They have 3 showers on the pod that aren't bigger than a porta-potty. Before I could even do anything, I had to clean the cell from top to bottom, the next morning when I awoke, I has realized that I had slept in a place like a full blown crack house would look + feel.

As I look in my surroundings, I come to find out that they were only 47% staffed here. That really makes me feel secured already. I must say that this is the cesspool of the Oklahoma system. The reason we were told we older inmates were sent here, was because they (staff) got tired of the youngsters + couldn't handle them any more, well, mutual respect goes both ways. The reason I came up with was, they have an A.C.A.[?] audit coming up + they sent us here so they could pass it by renovating [?] this facility. Because if any true to his [soul?] official wouldn't allow a dog to live here. Plus the staff that were stressed out or scared to work here would come back to work. That way, Oklahoma D.O.C. doesn't have to release 1,000 inmates. Because they have no where ot put us. God forbid D.O.C. would release anyone!!

The reason I said death camp at the beginning of this blog is because the medical they have here is the poorest I've ever seen. To give you an example - I was called to medical last week + after 1 hr 15 min a nurse came out and had to ask us inmates why they were there. I told her "I didn't know that you had called me over", she came back out 10 minutes later + said, it was a mistake, I was the wrong inmate. One inmate was given the wrong medication last week + it caused him to have a heart attack. One guy fell out from the heat + all they did was send him back to his unit.

I guess the real reason for this blog is to vent, because being thrust into a cesspool, it seems the staff here + the decision makers in Oklahoma City don't care about the older inmates. That we are just another head count + a commodity. We inmates consider ourselves a herd of cattle, just a means of money. There are now 840 40 years + older inmates here now, and nothing has changed in 35 days I've been here.

Thanks for writing! I finished the transcription for your post "Oklahoma D.O.C. Death Camp". I understand the need to vent, and I hope it helps that there's someone out there reading and trying to help get the word out.