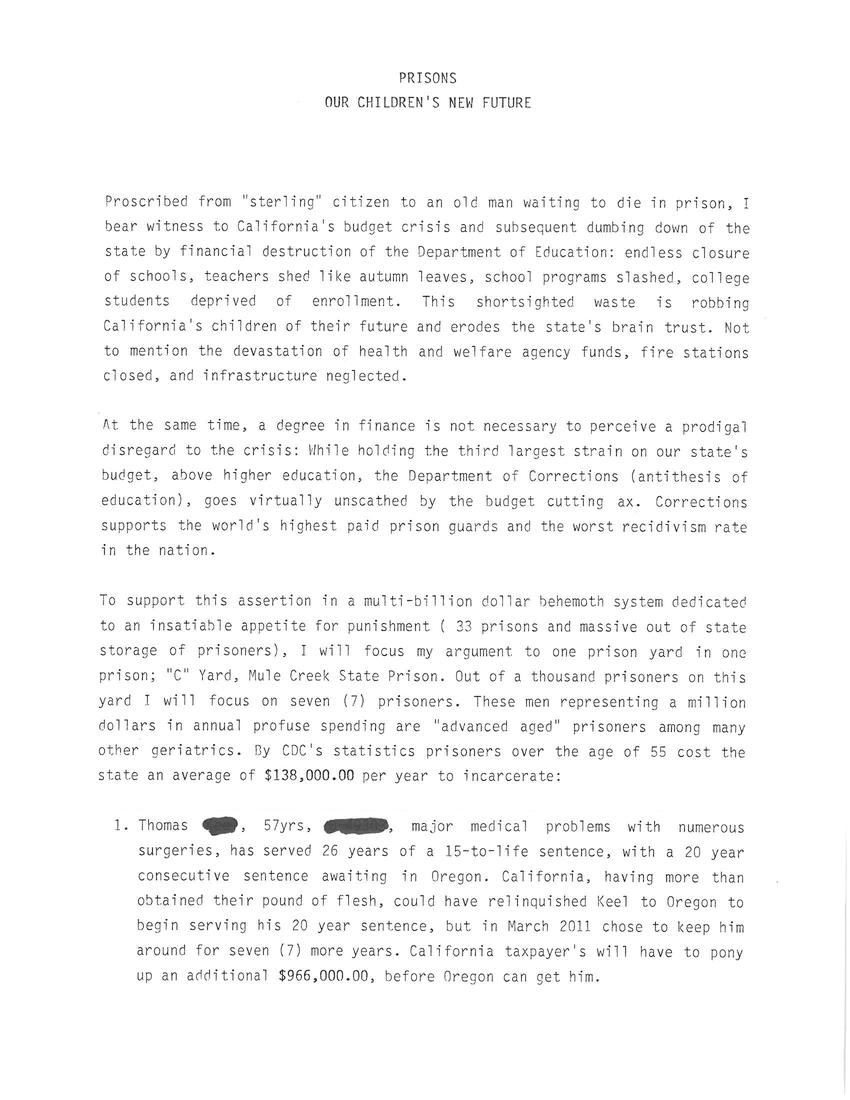 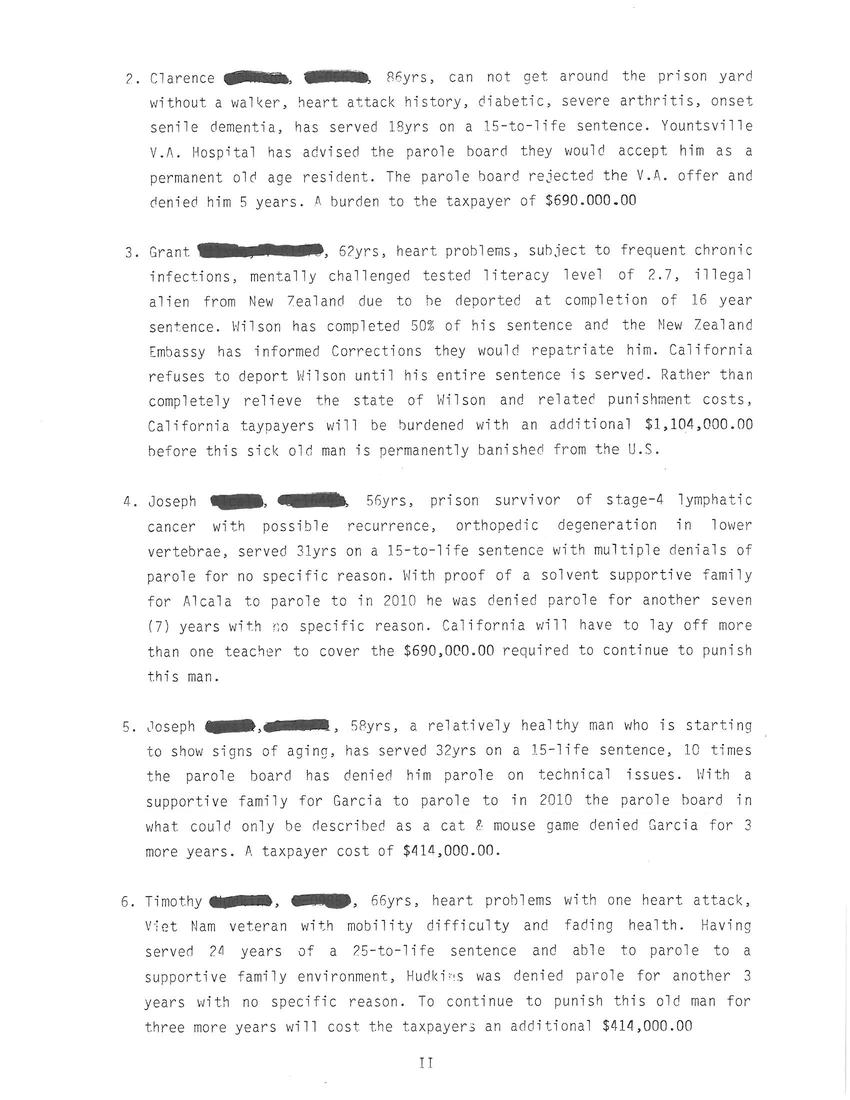 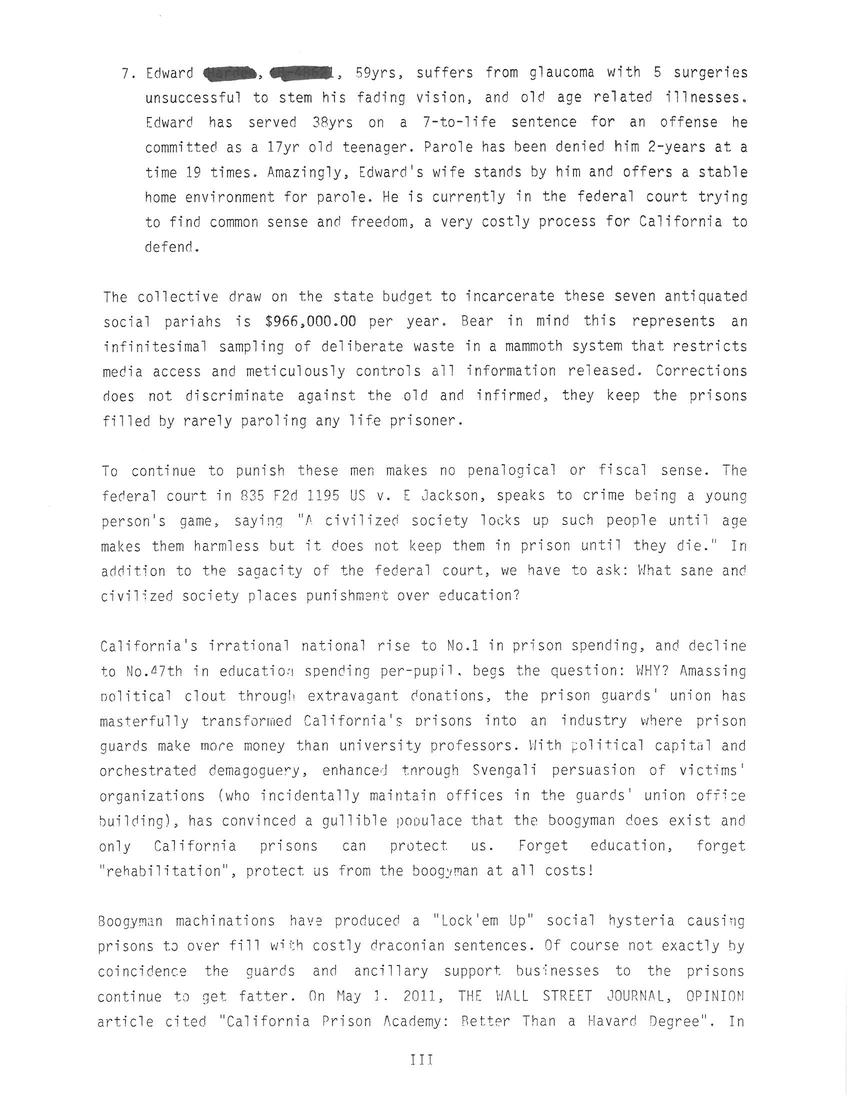 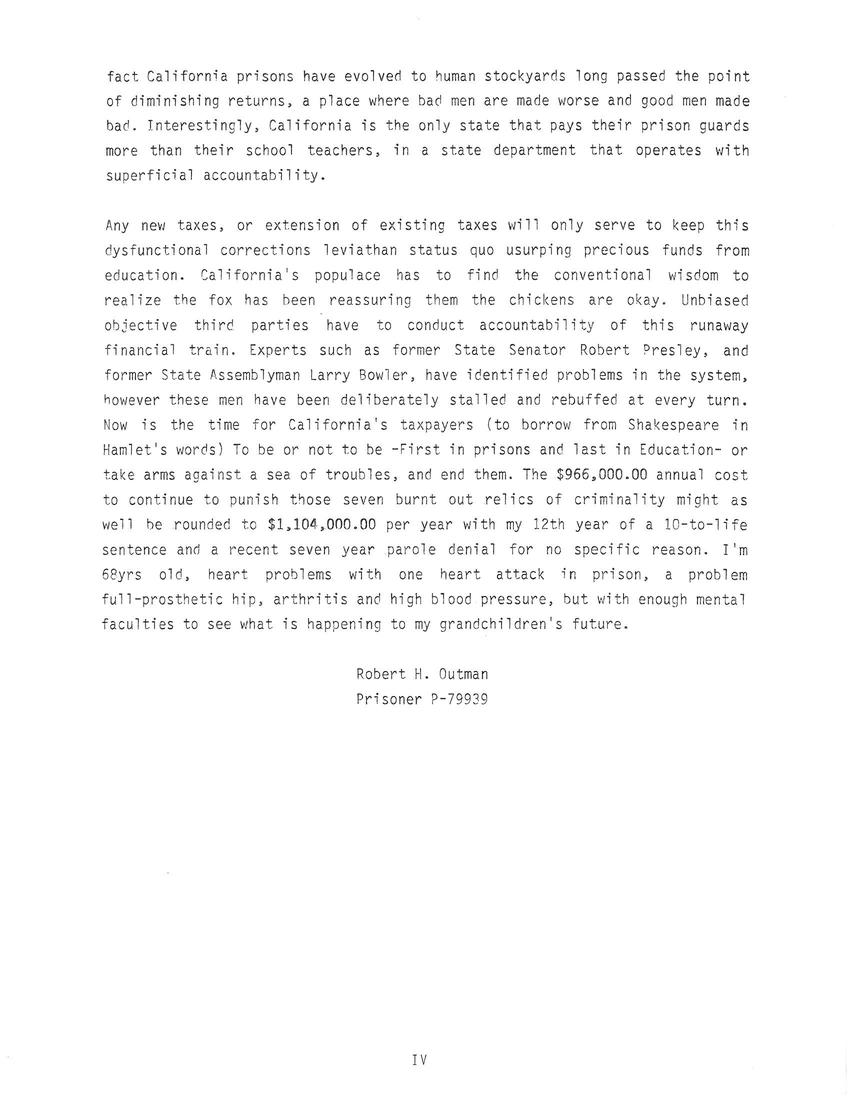 Proscribed from "sterling" citizen to an old man waiting to die in prison, I bear witness to California's budget crisis and subsequent dumbing down of the state by financial destruction of the Department of Education: endless closure of schools, teachers shed like autumn leaves, school programs slashed, college students deprived of enrollment. This shortsighted waste is robbing California's children of their future and erodes the state's brain trust. Not to mention the devastation of health and welfare agency funds, fire stations closed, and infrastructure neglected.

At the same time, a degree in finance is not necessary to perceive a prodigal disregard to the crisis: While holding the third largest strain on our state's budget, above higher education, the Department of Corrections (antithesis of education), goes virtually unscathed by the budget cutting ax. Corrections supports the world's highest paid prison guards and the worst recidivism rate in the nation.

To support this assertion in a multi-billion dollar behemoth system dedicated to an insatiable appetite for punishment (33 prisons and massive out of state storage of prisoners), I will focus my argument to one prison yard in one prison; "C" Yard, Mule Creek State Prison. Out of a thousand prisoners on this yard I will focus on seven (7) prisoners. These men representing a million dollars in annual profuse spending are "advanced aged" prisoners among many other geriatrics. By CDC's statistics prisoner's over the age of 5 cost the state an average of 138.000.00 per year to incarcerate:

1. Thomas [redacted], 57 yrs, [redacted], major medical problems with numerous surgeries, has served 26 years of a 15-to-life sentence, with a 20 year consecutive sentence awaiting in Oregon. California, having more than obtained their pound of flesh, could have relinquished Keel to Oregon to begin serving his 20 year sentence, but in March 2011 chose to keep him around for seven (7) more years. California taxpayers will have to pony up an additional $966,000.00, before Oregon can get him.

2. Clarence [redacted], [redacted], 86yrs, can not get around the prison yard without a walker, heart attack history, diabetic, severe arthritis, onset senile dementia, has served 18 yrs on a 15-to-life sentence. Yountsville V.A. Hospital has advised the parole board they would accept him as a permanent old age resident. The parole board rejected the V.A. offer and denied him 5 years. A burden to the taxpayer of $690.000.00.

3. Grant [redacted], 62yrs, heart problems, subject to frequent chronic infections, mentally challenged tested literacy level of 2.7, illegal alien from New Zealand due to be deported at completion of 16 year sentence. Wilson has completed 50% of his sentence and the New Zealand Embassy has informed Corrections they would repatriate him. California refuses to deport Wilson until his entire sentence is served. Rather than completely relieve the state of Wilson and related punishment costs, California taxpayers will be burdened with an additional $1,104,000.00 before this sick old man is permanently banished from the U.S.

4. Joseph [redacted], 56 yrs, prison survivor of stage-4 lymphatic cancer with possible recurrence, orthopedic degeneration in lower vertebrae, served 32 yrs on a 15-to-life sentence with multiple denials of parole for no specific reason. With proof of a solvent supportive family for Alcala to parole to in 2010 he was denied parole for another seven (7) years with no specific reason. California will have to lay off more than one teacher to cover the $690,000.00 required to continue to punish this man.

5. Joseph [redacted], 58yrs, a relatively healthy man who is starting to show signs of aging, has served 32yrs on a 15-life sentence, 10 times the parole board has denied him parole on technical issues. With a supportive family for Garcia to parole to in 2010 the parole board in what could only be described as a cat & mouse game denied Garcia for 3 more years. A taxpayer cost of $414,000.00.

6. Timothy [redacted], 66yrs, heart problems with one heart attack, Viet Nam veteran with mobility difficulty and fading health. Having served 24 years of a 25-to-life sentence and able to parole to a supportive family environment, Hudkins was denied parole for another 3 years with no specific reason. To continue to punish this old man for three more years will cost the taxpayers an additional $414,000.00.

7. Edward [redacted], 59yrs, suffers from glaucoma with 5 surgeries unsuccessful to stem his fading vision, and old age related illness. Edward has served 38yrs on a 7-to-life sentence for an offense he committed as a 17yr old teenager. Parole has been denied him 2-years at a time 19 times. Amazingly, Edward's wife stands by him and offers a stable home environment for parole. He is currently in the federal court trying to find common sense and freedom, a very costly process for California to defend.

The collective draw on the state budget to incarcerate these seven antiquated social pariahs is $966,000.00 per year. Bear in mind this represents an infinitesimal sampling of deliberate waste in a mammoth system that restricts media access and meticulously controls all information released. Correction does not discriminate against the old and infirmed, they keep the prisons filled by rarely paroling any life prisoner.

To continue to punish these men makes no penological or fiscal sense. The federal court in 835 F2d 1195 US v. E Jackson, speaks to crime being a young person's game, saying "A civilized society locks up such people until age makes them harmless but it does not keep them in prison until they die." In addition to the sagacity of the federal court, we have to ask: What sane and civilized society places punishment over education?

California's irrational national rise to No.1 in prison spending, and decline to No.47th in education spending per-pupil, begs the question: WHY? Amassing political clout through extravagant donations, the prison guards' union has masterfully transformed California's prisons into an industry where prison guards make more money than university professors. With political capital and orchestrated demagoguery, enhanced through Svengali persuasion of victims' organizations (who incidentally maintain offices in the guards' union office building), has convinced a gullible populace that the boogeyman does exist and only California prisons can protect us. Forget education, forget "rehabilitation", protect us from the boogeyman at all costs!

Boogeyman machinations have produced a "Lock 'em Up" social hysteria causing prisons to over fill with costly draconian sentences. Of course not exactly by coincidence the guards and ancillary support businesses to the prisons continue to get fatter. On May 1, 2011, THE WALL STREET JOURNAL, OPINION article cited "California Prison Academy: Better Than a Harvard Degree". In fact California prisons have evolved to human stockyards long past the point of diminishing returns, a place where bad men are made worse and good men made bad. Interestingly, California is the only state that pays their prison guards more than their school teachers, in a state department that operates with superficial accountability.

Any new taxes, or extension of existing taxes will only serve to keep this dysfunctional corrections leviathan status quo usurping precious funds from education. California's populace has to find the conventional wisdom to realize the fox has been reassuring them the chickens are okay. Unbiased objective third parties have to conduct accountability of this runaway financial train. Experts such as former State Senator Robert Presley, and former State Assemblyman Larry Bowler, have identified problems in the system, however these men have been deliberately stalled and rebuffed at every turn. Now is the time for California's taxpayers (to borrow from Shakespeare in Hamlet's words) To be or not to be - First in prisons and last in Education - or take arms against a sea of troubles, and end them. The $966,000.00 annual cost to continue to punish those seven burnt out relics of criminality might as well be rounded to $1,104,000.00 per year with my 12th year of a 10-to-life sentence and a recent seven year parole denial for no specific reason. I'm 68yrs old, heart problems with one heart attack in prison, a problem full-prosthetic hip, arthritis and high blood pressure, but with enough mental faculties to see what is happening to my grandchildren's future.

Wow I didn't know things were this bad in the prison system. With all our economy debt, Sacramento closing kindergarten's for lack of funds, thousands of police layoffs, on and on we all know..how can I help get the word out?
Karen J Woodward vixxen7@yahoo.com
(scanned reply – view as blog post)
uploaded April 17, 2012.  Original (PDF) 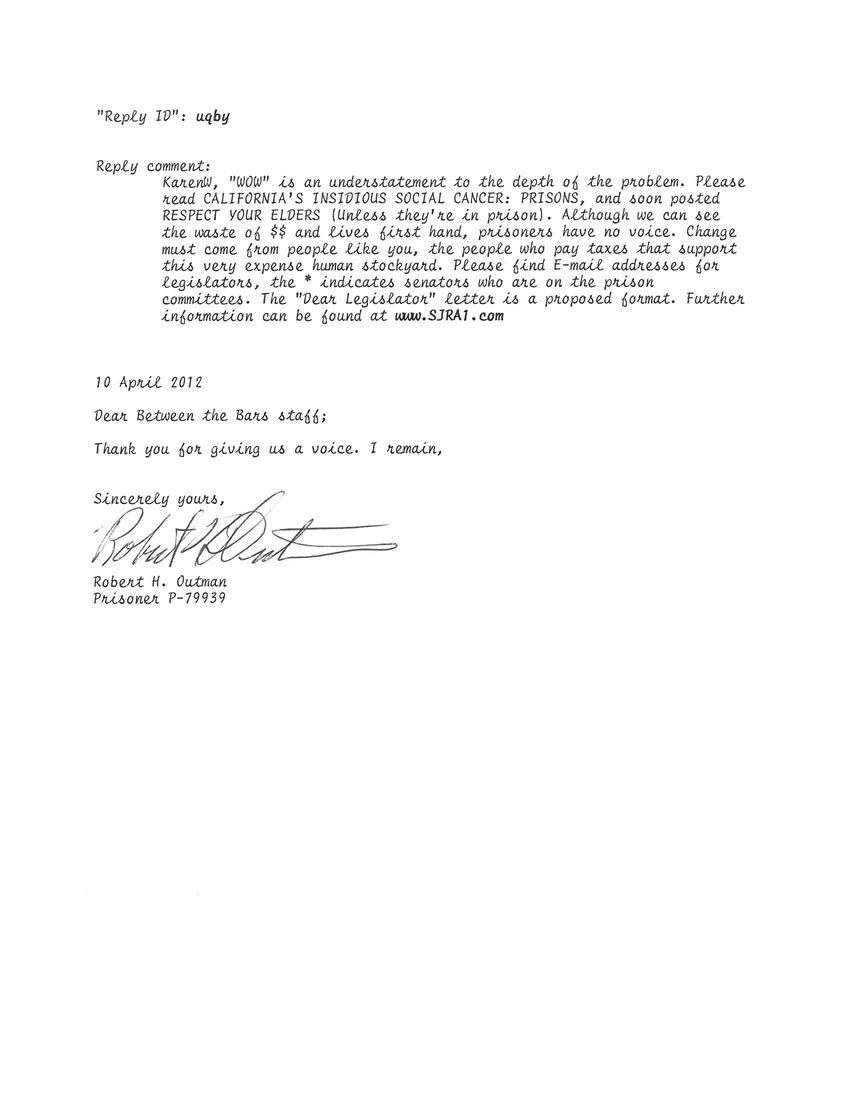 Dear Robert,
I am attempting to print out copies of your trancribed article"Prisons Our Childrens New Future" because the print in nice and big in the transcribed version but it has not been finished transcribing and contains alot of spelling errors. The gramatical we all can ignore.
I only have access to a printer for a few days as the semester of school is over.
If you dont mind I am spell checking it before I print it out. Also it is not the complete article. Have whoever transcribed it email me and I can help. Bringing my flashdrive to the compuer lab tomorrow. I am done with school but I will get here somehow.
Love Karen
Also I will advocate this article on a website named "Prison Talk" a huge site. Very popular. They will love this there. I can start a blog soon as I figure out how to do that. ~s`
(scanned reply – view as blog post)
uploaded May 28, 2012.  Original (PDF) 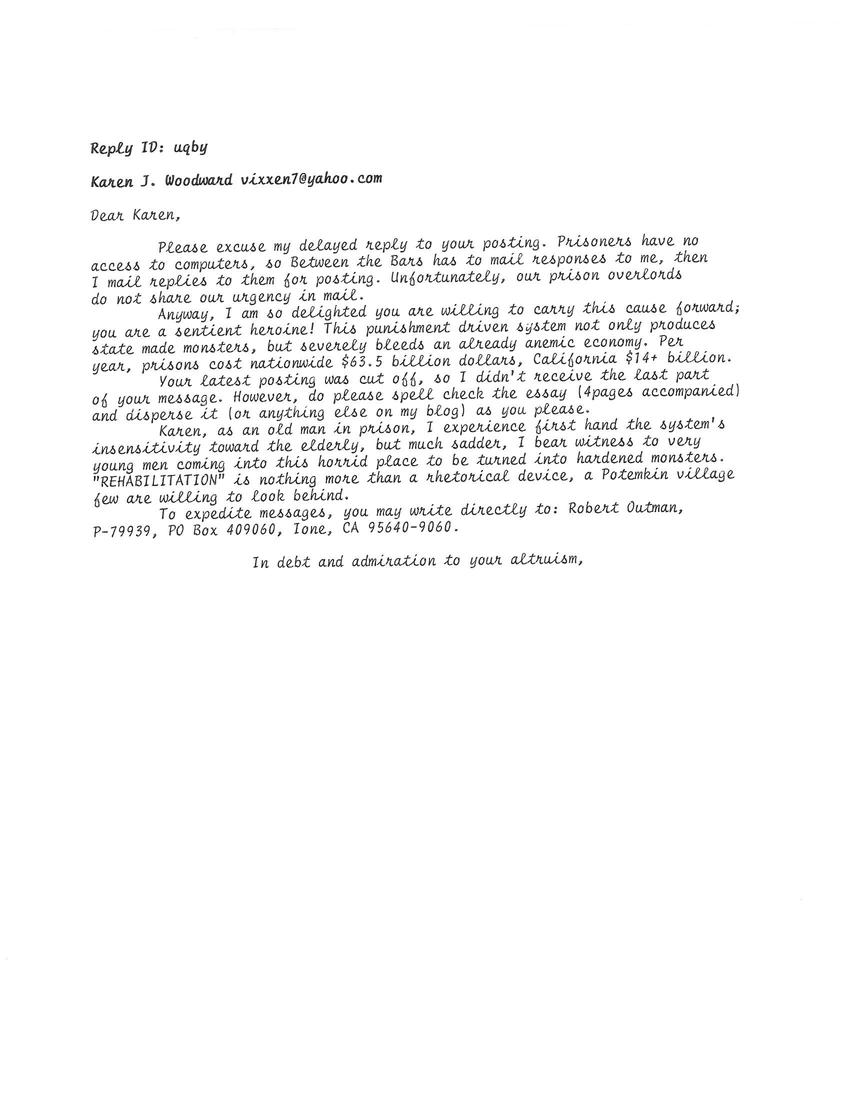