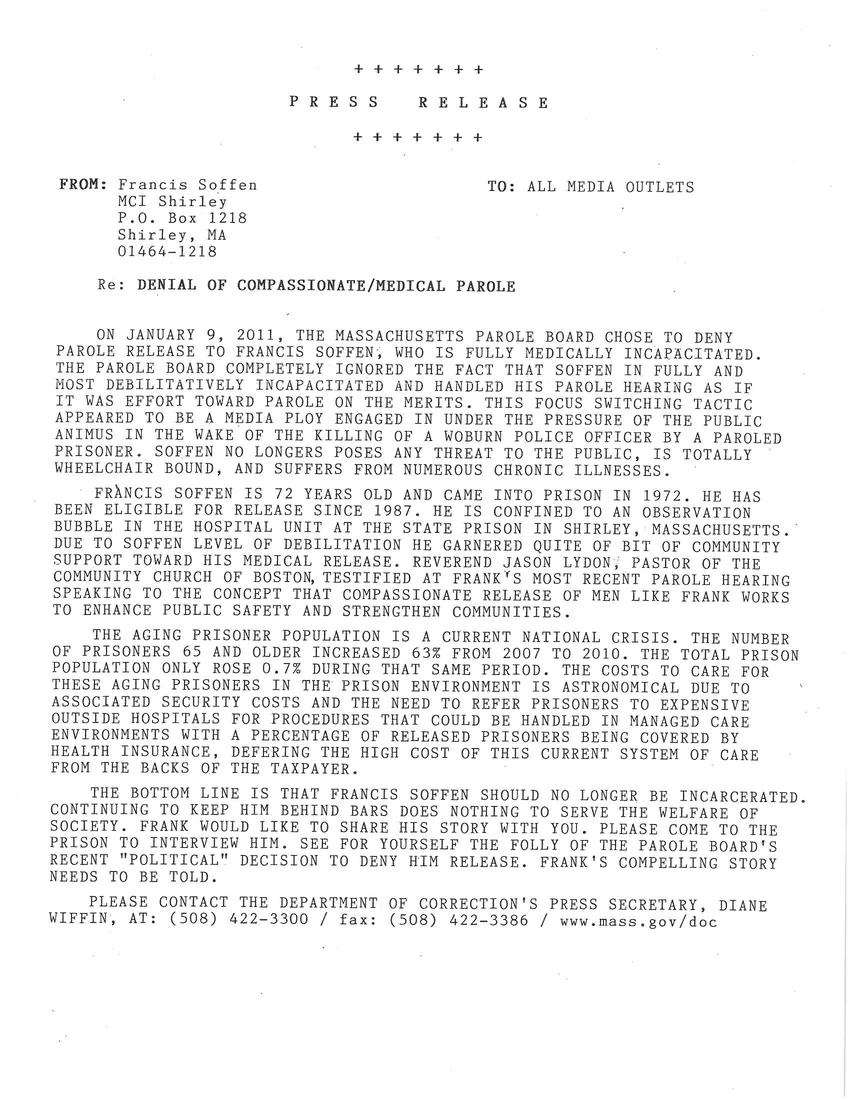 On January 9, 2011, the Massachusetts Parole Board chose to deny parole release to Francis Soffen, who is fully medically incapacitated. The parole board completely ignored the fact that Soffen is fully and most debilitatively incapacitated and handled his parole hering as if it was effort toward parole on the merits. This focus switching tactic appeared to be a media ply engaged in under the pessure of the public animus in the wake of the killing of a woburn police officer by a paroled prisoner. Soffen no longer poses a threat to the public, is totally wheelchair bound, and suffers from numerous chronic illnesses.

Francis soffen is 72 years old and came into prison in 1972. He has been eligible for release since 1987. He is confined to an observation bubble in the hospital unit at the state prison in Shirley, Massachusetts. Due to Soffen's level of debilitation he garnered quite a bit of community support toward his medical release. Reverend Jason Lydon, Pastor of the community church of Boston, testified at Frank's most recent parole hearing speaking to the concept that compassionate release of men like Frank works to enhance public safety and strengthen communities.

The aging prisoner population is a current national crisis. The number of prisoners 65 ad older increased 63% from 2007 to 2010. The total prison population only rose 0.7% during that same period. The costs to care for these aging prisoners in the prison environment is astronomical due to associated security costs and the need to refer prisoners to expensive outside hospitals for procedures that could be handled in managed care environments with a percentage of released prisoners being covered by health insurance, defering the high cost of this current system of care from the backs of the taxpayer.

The bottom line is that Francis soffen should no longer be incarcerated. Continuing to keep him behind bars does nothing to serve the welfare of society. Frank would like to share his story with you. Please come to he prison to interview him. See for yourself the folly of the parole board's recent "political" decision to deny him release. Frank's compelling story needs to be told".