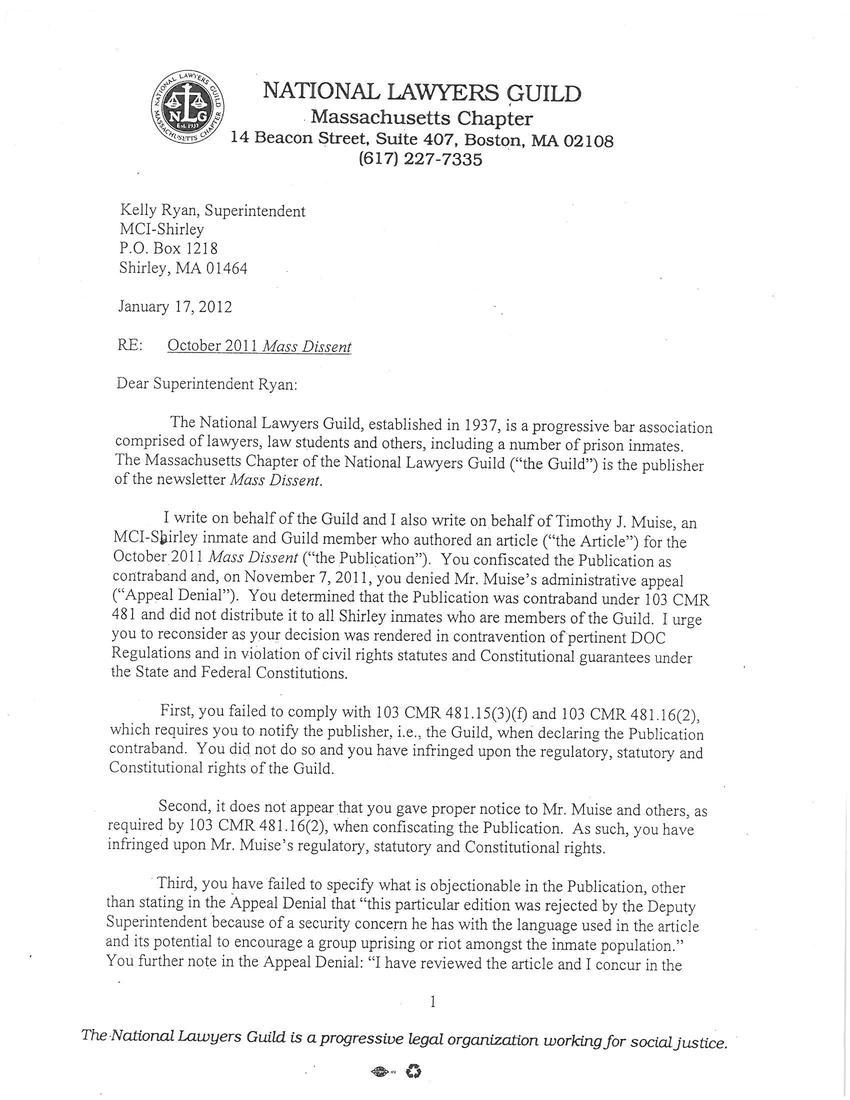 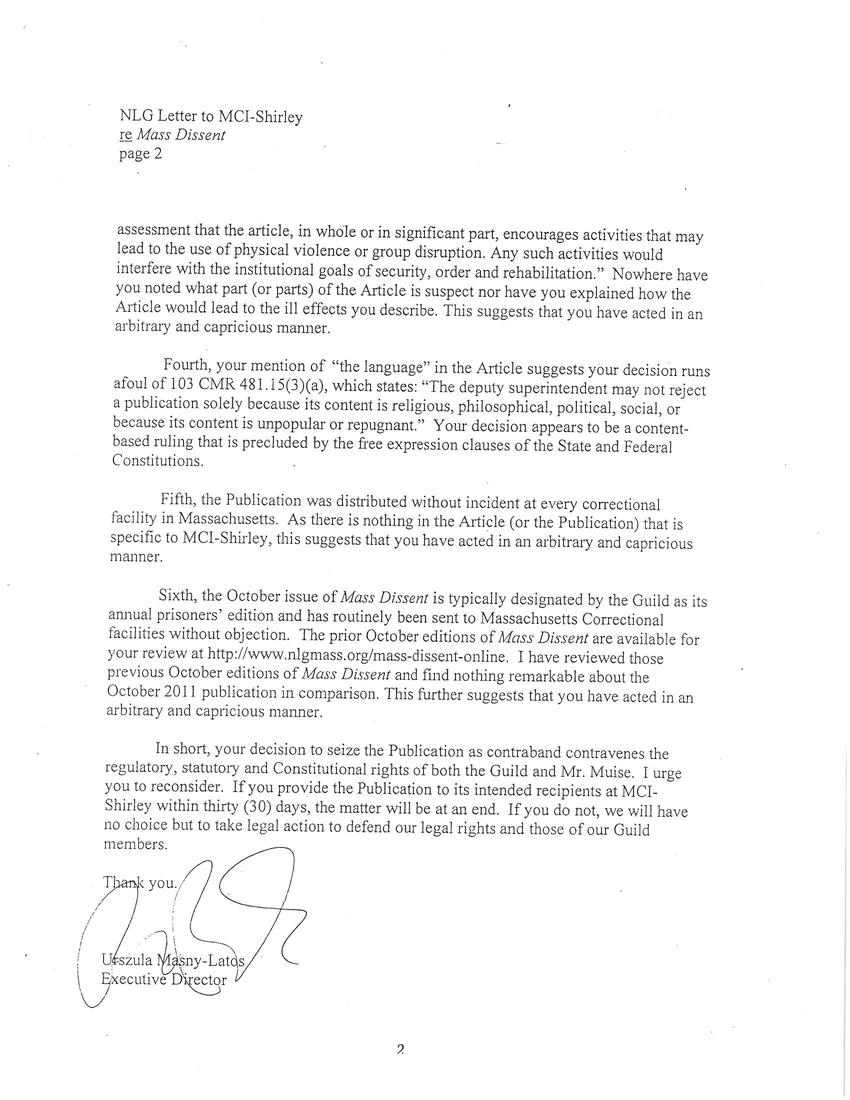 I write on behalf of the Guild and I also write on behalf of timothy J Muie, an MCI-Shirley inmate and Guild member who authored an article ("the Article") for the October 2011 Mass Dissent ("the Publication"). You confiscated the Publication as contraband and, on November 7.2011, you denied Mr Muise's administrative appeal ("appeal Denial"). You determined that the Publication was contraband under 103 CMR 481 and did not distribute it to all Shirley inmates who are members of the Guild. I urge you to reconsider as your decision was rendered in contravention of pertinent DOC Regulations and in violation of civil rights statutes and Constitutional gurantees under the State and Federal Constitutions.

First, you failed to comply with 103 CMR 481.15(3)(f) and 103 CMR 481.16(2), which requires you to notify the publisher, i.e. the Guild, when declaring the Publication contraband. You did not do so and you have infringed upon the regulatory, statutory and Constititional rights of the Guild.

Second, it does not appear that you gave proper notice to Mr Muise and otehrs, as required by 103 CMR 481,16(2), when confiscating the Publication. As such, you have infringed upon Mr Muise's regulatory, statutory and constitutional rights.

Third, you have failed to specify what is objectionable in the Publication, other than stating in the Appeal Denial that "this particular edition was rejected by the Deputy Superintendent because of a security concern he has with the language used in the article and its potential to encourage a group uprisng or riot amongst the inmate population". You further note in the Appeal denial: "I have reviewed the article and I concur in the assessment that the artice, in whole or in significant part, encourages activities tha tmay lead to the use of physical violence or group disruption. any such activities would interfere with the institutional goals of security, order and rehabilitation". Nowhere have you noted what part (or parts) of the article is suspect nor have you explained how the article would lead to the ill effects you describe. This suggests that you have acted in an arbitrary and capricious manner.

Fourth, your mention of "the langauge" in the Article suggests your decision runs afoul of 103 CMR 481.15(3)(a), which states: "The deputy superintendent may not rejest a publication solely because its content is religious, philosophical, political, social, or because ruling that is precuded by the free expression clauses of the State and Federal Constitutions.

Fifth, the Publication was distrubuted without incident at every correctional dacility in Massachusetts. As there is nothing in the Article (of the Publication) that is specific to MCI-Shirley, this suggests that you have acted in an arbitrary and capricious manner.

sSixth, the October issue of Mass Dissent is typically designated by the Guild as its annual prisoners' edition and has routinely been sent to Massachusetts Correctional facilities without objection. The prior October editions of Mass Dissent are available for your review at http://www.ntgmass.org/mass-dissent-online. I have reviewed those previous October editions of Mass Dissent and find nothing remarkable about the October 2011 publication in comparisn. This further suggests that you have acted in an arbitrary and capricious manner.

In short, your decision to seize the Publication as contraband contavenes the regulatory, statutory and constututional rights of both the Guild and Mr Muise. I urge you to reconsider. if yu provide the Publication to its intended recipients at MCI-Shirley within thirty (30) days, the matter willbe at an end. If you do not, we will haveno choice but to take legal action to defend our legal rights and those of our Guild members.