Did I Commit A Crime? 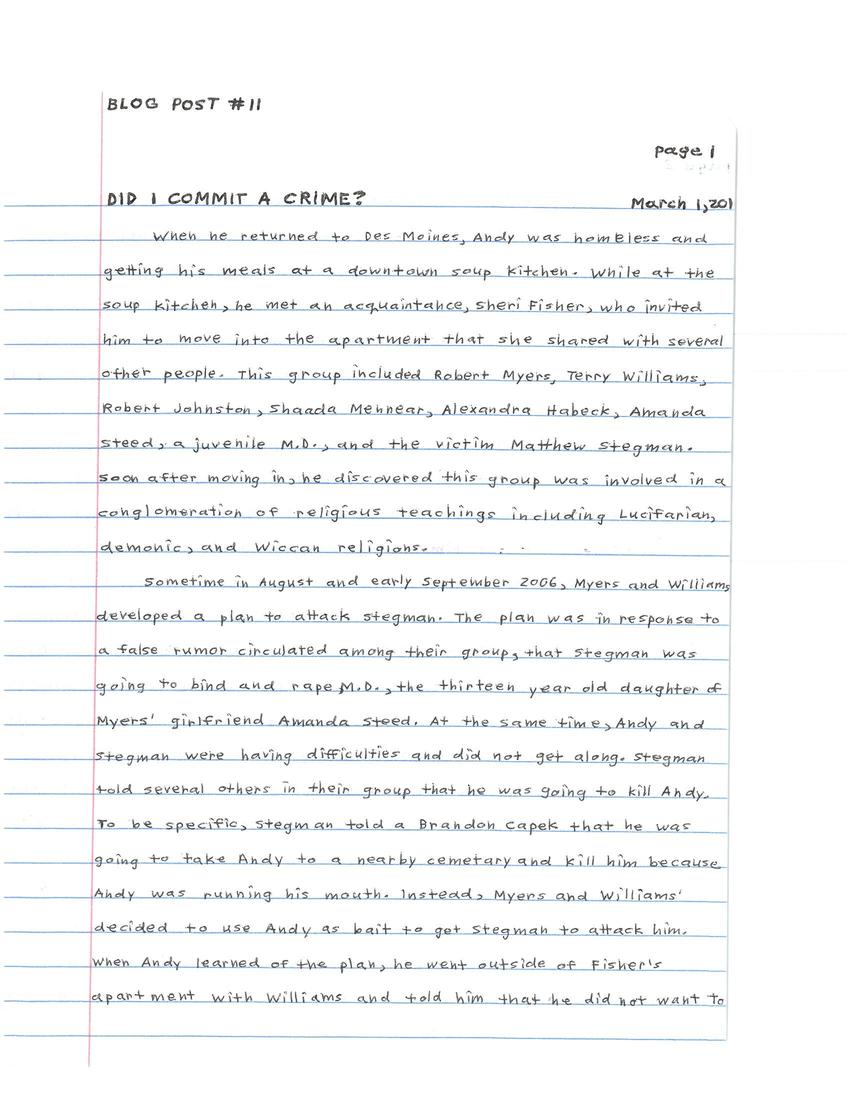 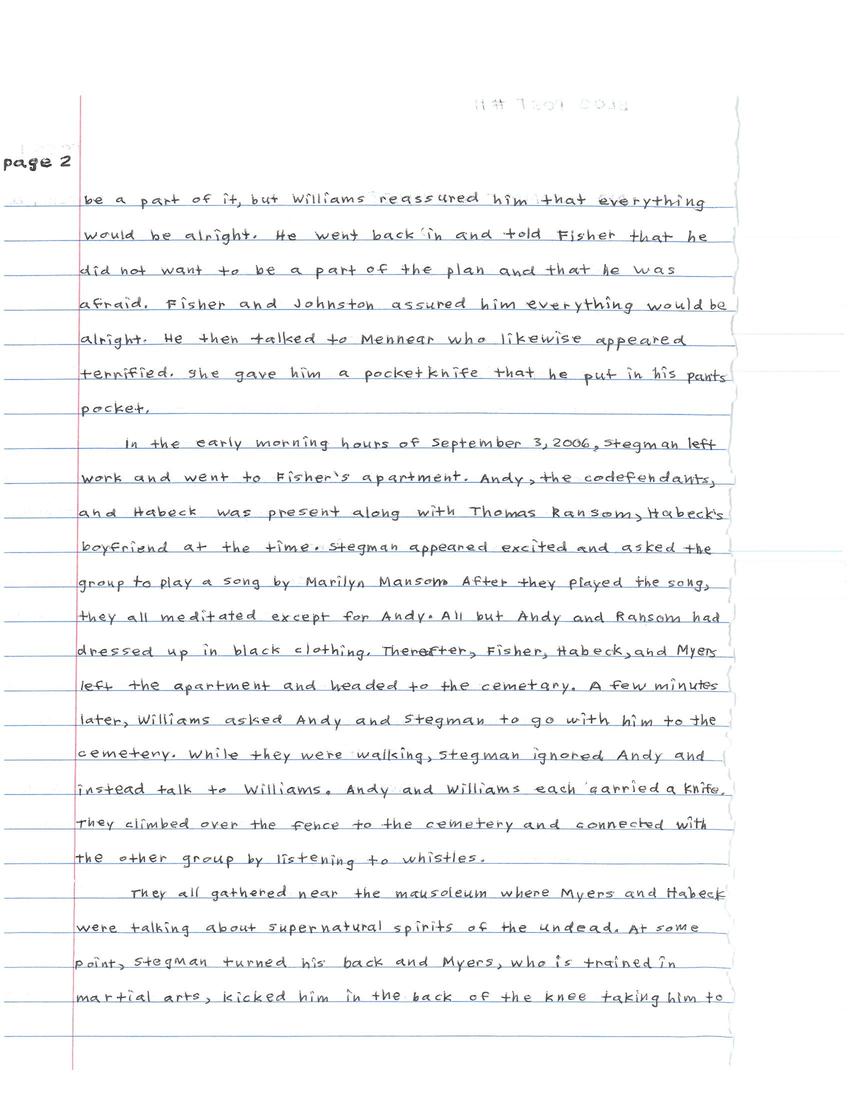 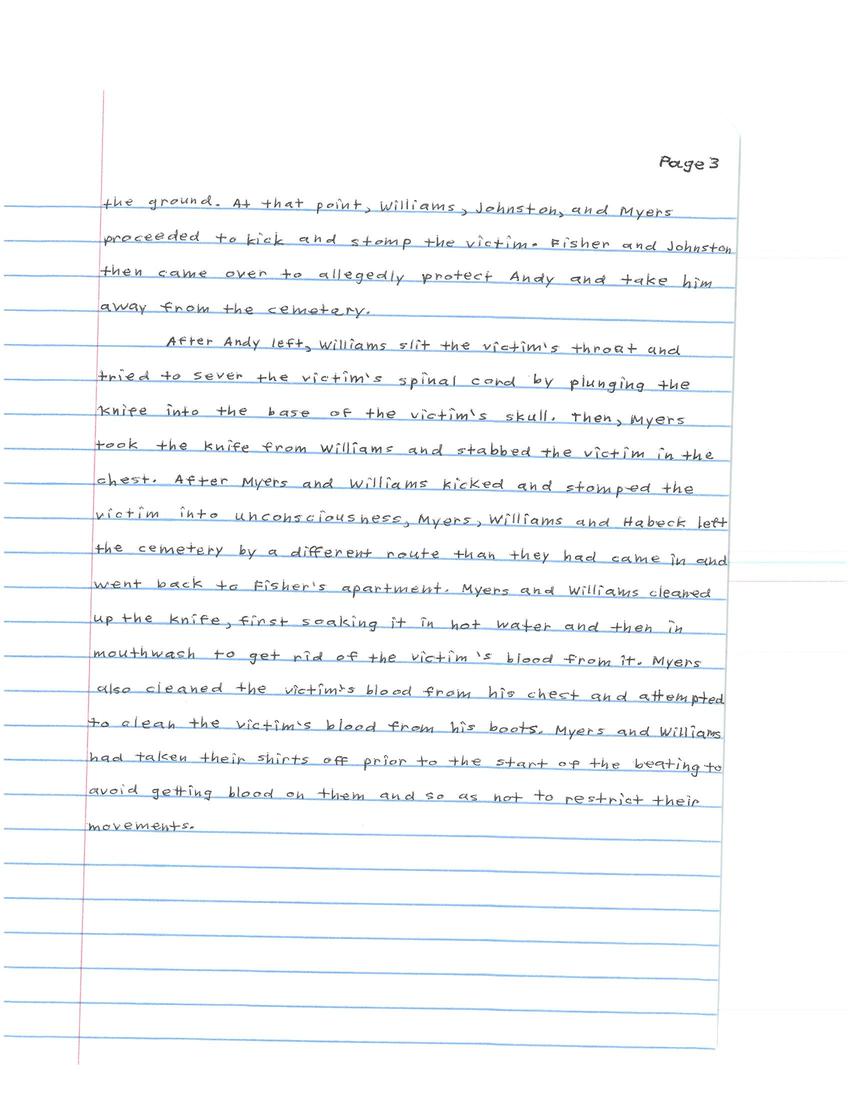 DID I COMMIT A CRIME? March 1, 201[?]
______________________
When he returned to Des Moines, Andy was homeless and getting his meals from a downtown soup kitchen. While at the soup kitchen, he met an acquaintance, Sheri Fisher, who invited him to move into the apartment she shared with several other people. This group included Robert Myers, Terry Williams, Robert Johnston, Shaada Mennear, Alexandra Habeck, Amanda Steed, a juvenile M.D., and the victim Matthew Stegman. Soon after moving in, he discovered this group was involved in a conglomeration of religious teachings including Luciferian, demonic, and Wiccan religions.

Sometime in August and early September 2006, Myers and Williams developed a plan to attack Stegman. The plan was in response to a false rumor circulated among their group, that Stegman was going to bind and rape M.D., the thirteen-year-old daughter of Myers' girlfriend, Amanda Steed. At the same time, Andy and Stegman were having difficulties and did not get along. Stegman told several others in their group that he was going to kill Andy. To be specific, Stegman told one Brandon Capek that he was going to take Andy to a nearby cemetery and kill him because Andy was running his mouth. Instead, Myers and Williams decided to use Andy as bait to get Stegman to attack him. When Andy learned of the plan, he went outside of Fisher's apartment with Williams and told him that he did not want to be a part of it, but Williams reassured him that everything would be all right. He went back in and told Fisher that he did not want to be part of the plan and that he was afraid. Fisher and Johnston assured him that everything would be all right. He then talked to Mennear who likewise appeared terrified. She gave him a pocket knife that he put in his pant's pocket.

In the early morning hours of September 3, 2006, Stegman left work and went to Fisher's apartment. Andy, the codefendants and Habeck were present, along with Thomas Ransom, Habeck's boyfriend at the time. Stegman appeared excited and asked the group to play a song by Marilyn Manson. After they played the song, they all meditated except for Andy. All but Andy and Ransom had dressed up in black clothing. Thereafter, Fisher, Habeck and Myers left the apartment and headed to the cemetery. A few minutes later, Williams asked Andy and Stegman to go with him to the cemetery. While they were walking, Stegman ignored Andy and instead talked to Williams. Andy and Williams each carried a knife. They climbed over the fence to the cemetery and connected with the other group by listening to whistles.

They all gathered near the mausoleum where Myers and Habeck were talking about supernatural spirits of the undead. At some point, Stegman turned his back and Myers, who is trained in martial arts, kicked him in the back of the knee taking him to the ground. At that point Williams, Johnston and Myers proceeded to kick and stomp the victim. Fisher and Johnston then came over to allegedly protect Andy and take him away from the cemetery.

Thanks for writing! I finished the transcription for your post.
Yes, you did commit a crime. How can you actually think that you didn't? And don't play the victim as you have in this. We all know the truth as to your confession and also subsequent trial. Maybe if you took some accountability for what you did, and maybe if you had used some common sense, our son would still be alive. No one wants to hear your lies, nor to they want to hear your whining about your not committing a crime. You went along with it. That makes you guilty! Man up for once in your life.