Letter To The Public 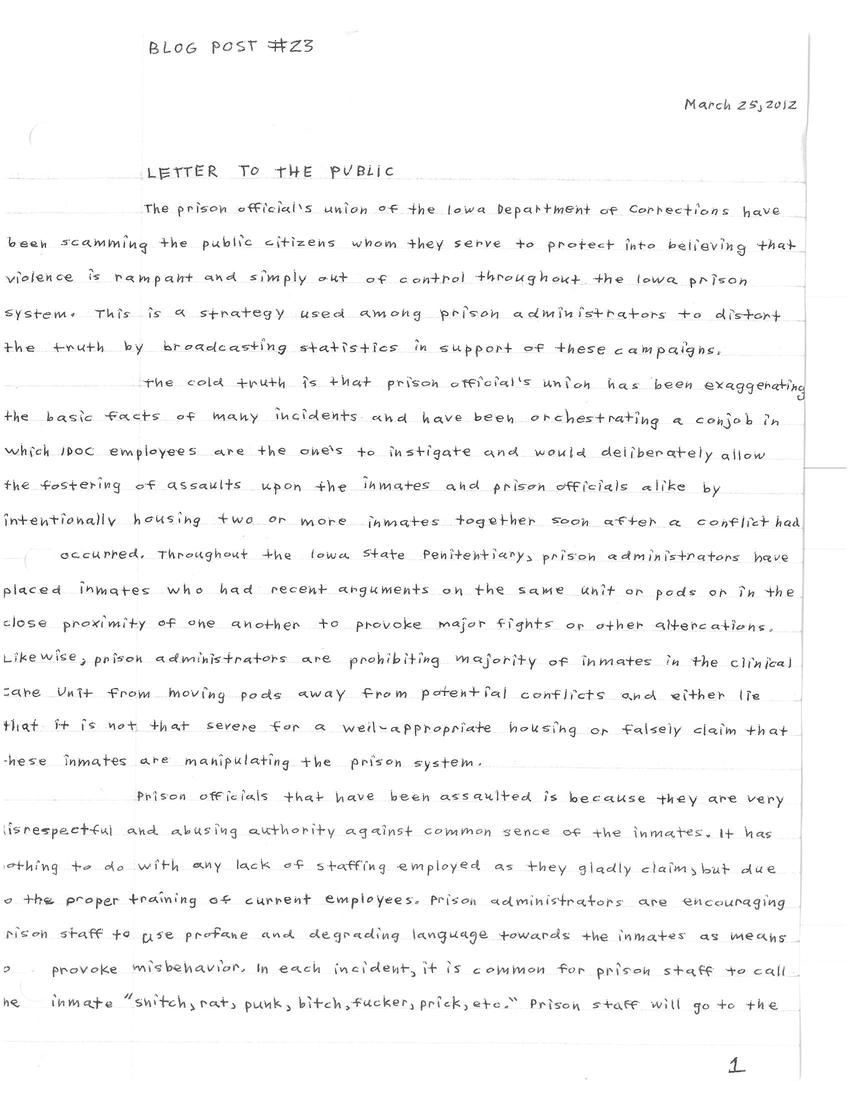 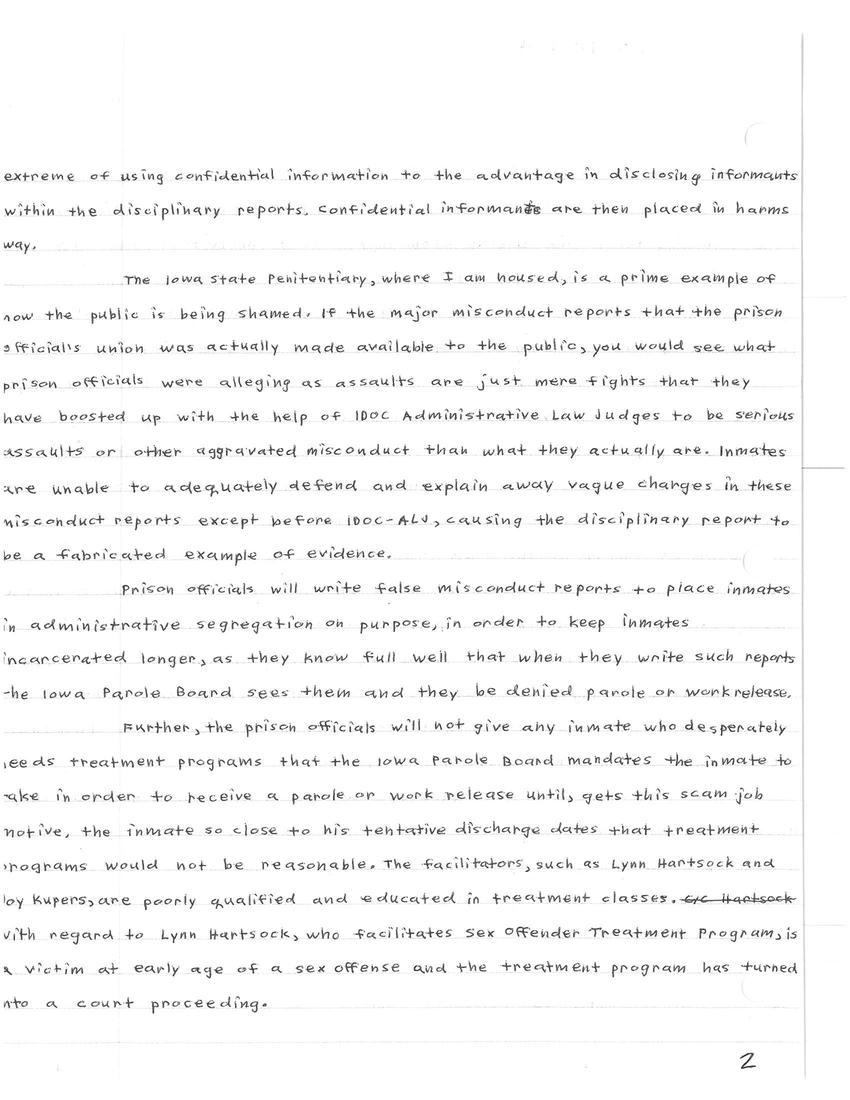 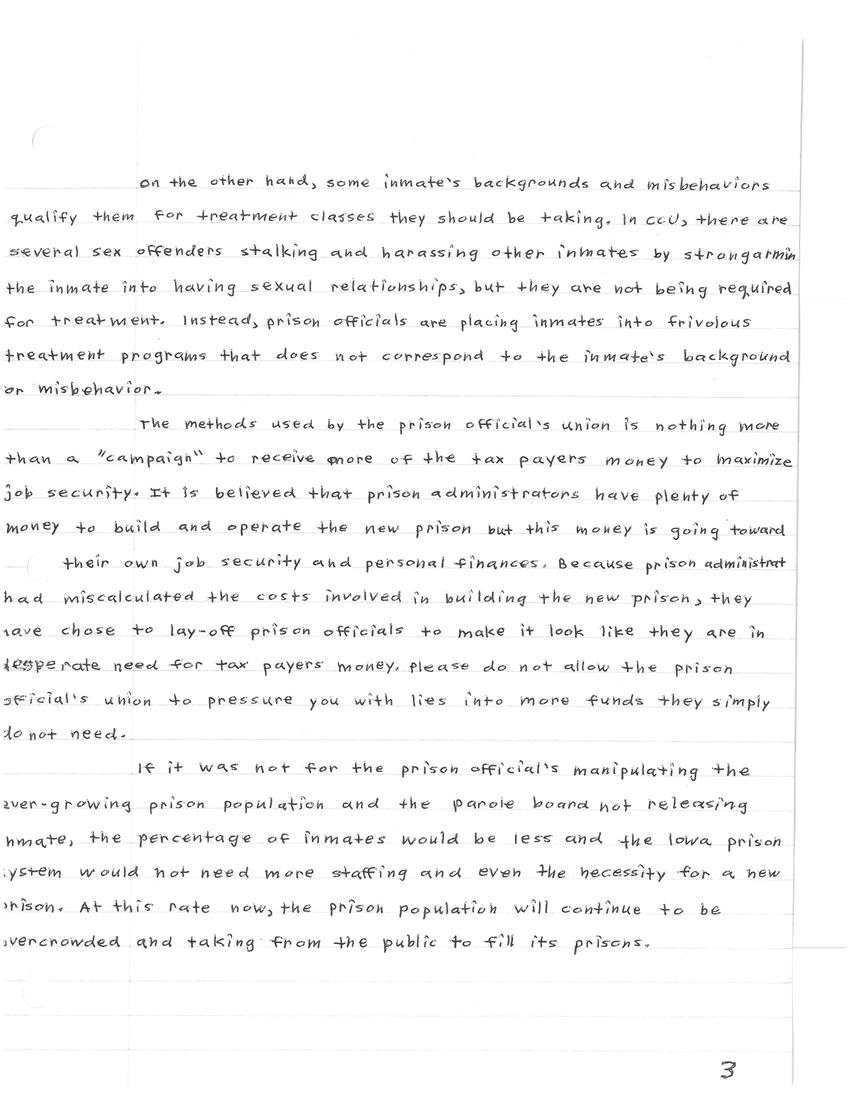 LETTER TO THE PUBLIC

The prison official's union of the Iowa Department of Corrections have been scamming the public citizens whom they serve to protect into believing that violence is rampant and simply out of control throughout the Iowa prison system. This is a strategy used among prison administrators to distort the truth by broadcasting statistics in support of these campaigns.

The cold truth is that prison official's union has been exaggerating the basic facts of many incidents and have been orchestrating a conjob in which IDOC employees are the one's to instigate and would deliberately allow the fostering of assaults upon the inmates and prison officials alike by intentionally housing two or more inmates together soon after a conflict had occurred. Throughout the Iowa State Penitentiary, prison administrations have placed inmates who had recent arguments on the same unit or pods or in the close proximity of one another to provoke major fights or other alterations. Likewise, prison administrators are prohibiting majority of inmates in the clinical care unit from moving pods away from potential conflicts and either lie that it is not that severe for a well-appropriate housing or falsely claim that these inmates are manipulating the prison system.

Prison officials that have been assaulted is because they are very disrespectful and abusing authority against common sense of the inmates. It has nothing to do with any lack of staffing employed as they gladly claim, but due to the proper training of current employees. Prison administrators are encouraging prison staff to use profane and degrading language towards the inmates as means to provoke misbehavior. in each incident, it is common for prison staff to call the inmate "snitch, rat, punk, bitch, fucker, prick, etc". Prison staff will go to the extreme of using confidential information to the advantage in disclosing informants within the disciplinary reports. Confidential informants are then placed in harm's way.

The Iowa State Penitentiary, where I am housed, is a prime example of now the public is being shamed. If the major misconduct reports that the prison officials union was actually made available to the public, you would see what prison officials were alleging as assaults are just mere fights that they have boosted up with the help of IDOC Administrative Law Judges to be serious assaults or other aggravated misconduct tha n what they actually are. Inmates are unable to adequately defend and explain away vague charges in these misconduct reports except before IDOC-ALJ, causing the disciplinary report to be a fabricated example of evidence.

Prison officials will write false misconduct reports to place inmates in administrative segregation on purpose, in order to keep inmates incarcerated longer, as they know full well that when they write such reports the Iowa Parole board sees them and they be denied parole or work release.

Further, the prison officials will not give any inmate who desperately needs treatment programs that the Iowa Parole Board mandates the inmate to make in order to receive a parole or work release until, gets this scam job motive, the inmate so close to his tentative discharge dates that treatment programs would not be reasonable. The facilitators, such as Lynn Hartsock and Kupers, are poorly qualified and educated in treatment classes. with regard to Lynn Hartsock, who facilitates Sex Offender Treatment Program, is a victim at early age of a sex offense and the treatment program has turned into a court proceeding.

On the other hand, some inmates' backgrounds and misbehaviors qualify them for treatment classes they should be taking. In CCU, there are several sex offenders stalking and harassing other inmates by strong-arming the inmate into having sexual relationships, but they are not being required for treatment. Instead, prison officials are placing inmates into frivolous treatment programs that does not correspond to the inmate's background or misbehavior.

The methods used by the prison official's union is nothing more than a "campaign" to receive more of the tax payer's money to maximize job security. It is believed that prison administrators have plenty of money to build and operate the new prison but this money is going toward their own job security and personal finances. Because prison administrators had miscalculated the costs involved in building the new prison, they have chose to lay-off prison officials to make it look like they are in desperate need for tax payers' money. Please do not allow the prison official's union to pressure you with lies into more funds they simply do not need.

If it was not for the prison officials manipulating the ever-growing prison population and the parole board not releasing inmates, the percentage of inmates would be less and the Iowa prison system would not need more staffing and even the necessity for a new prison. At this rate now, the prison population will continue to be overcrowded and taking from the public to fill its prisons.

Saw your picture and you've gotten a little older (as we all do!) and you've gained some weight. I signed up with my e-mail address so that you can e-mail me if you wish to.

Have tried to call your mom and dad and the phone is never answered and message says their box is full of messages, so haven't been able to speak to them.

Hope you are feeling well and that you are standing true to your faith in Jesus Christ.