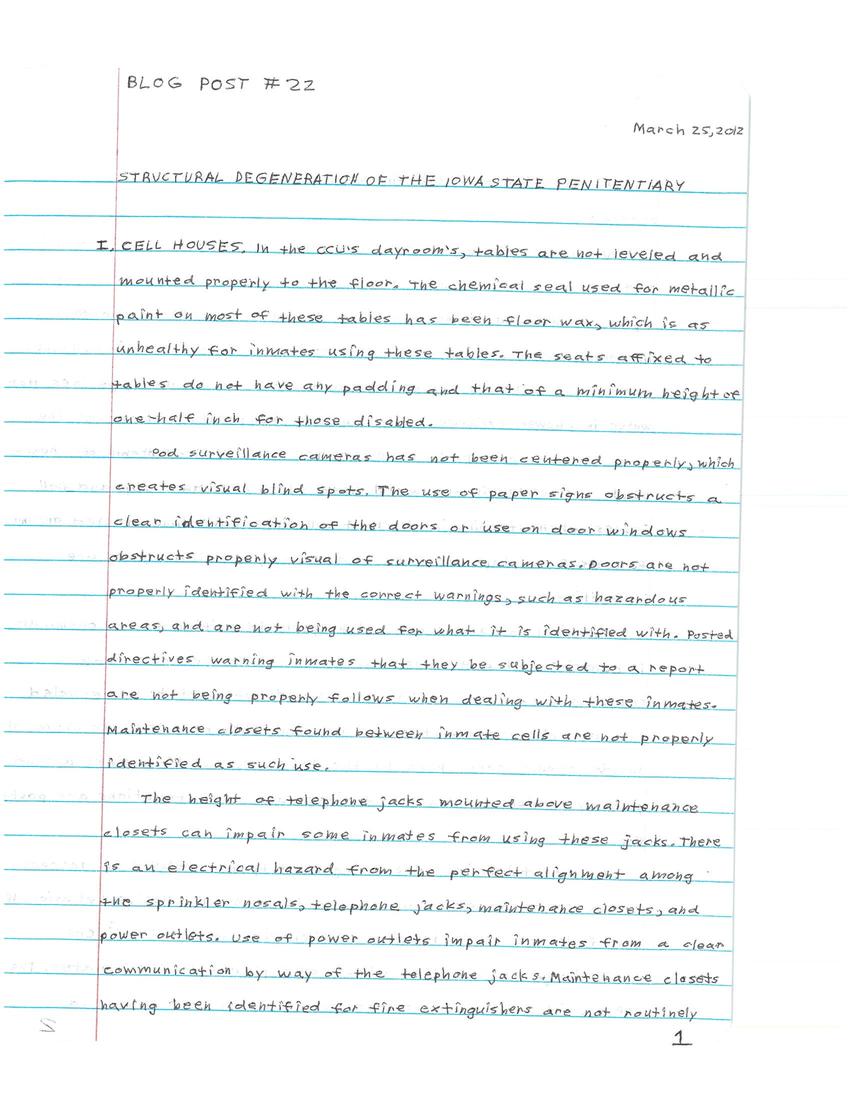 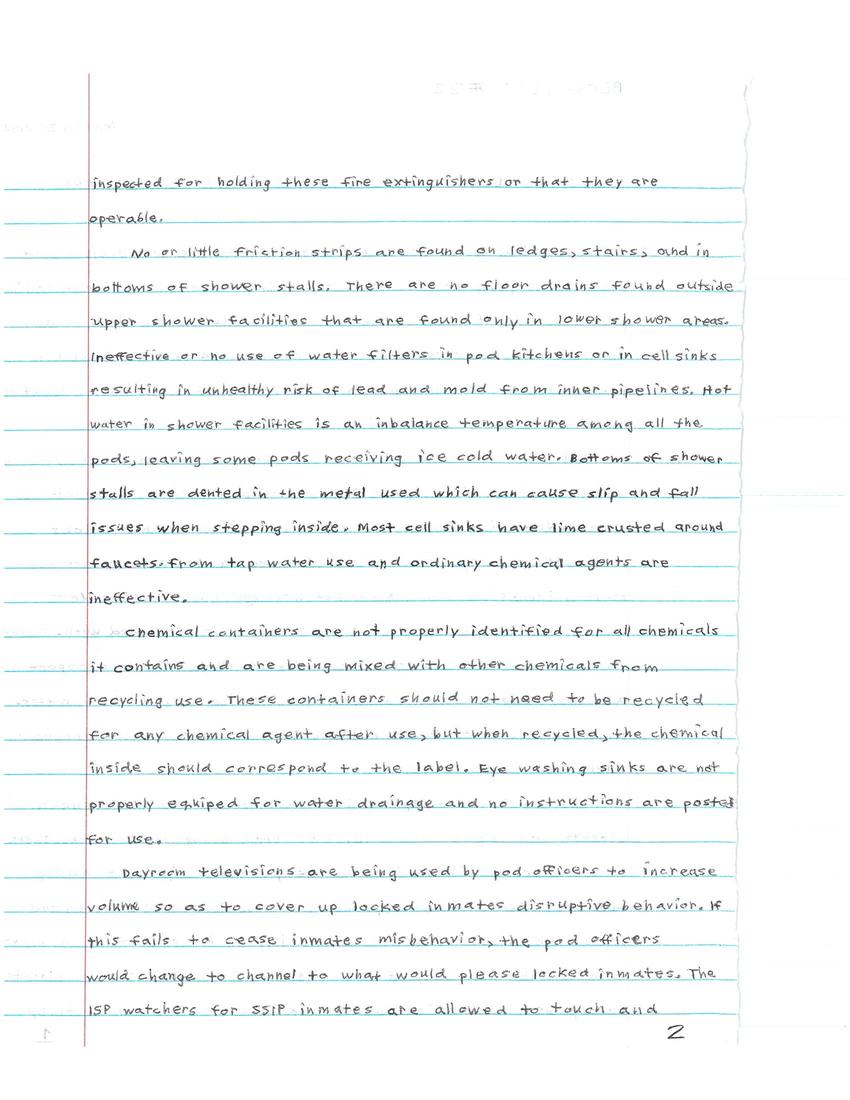 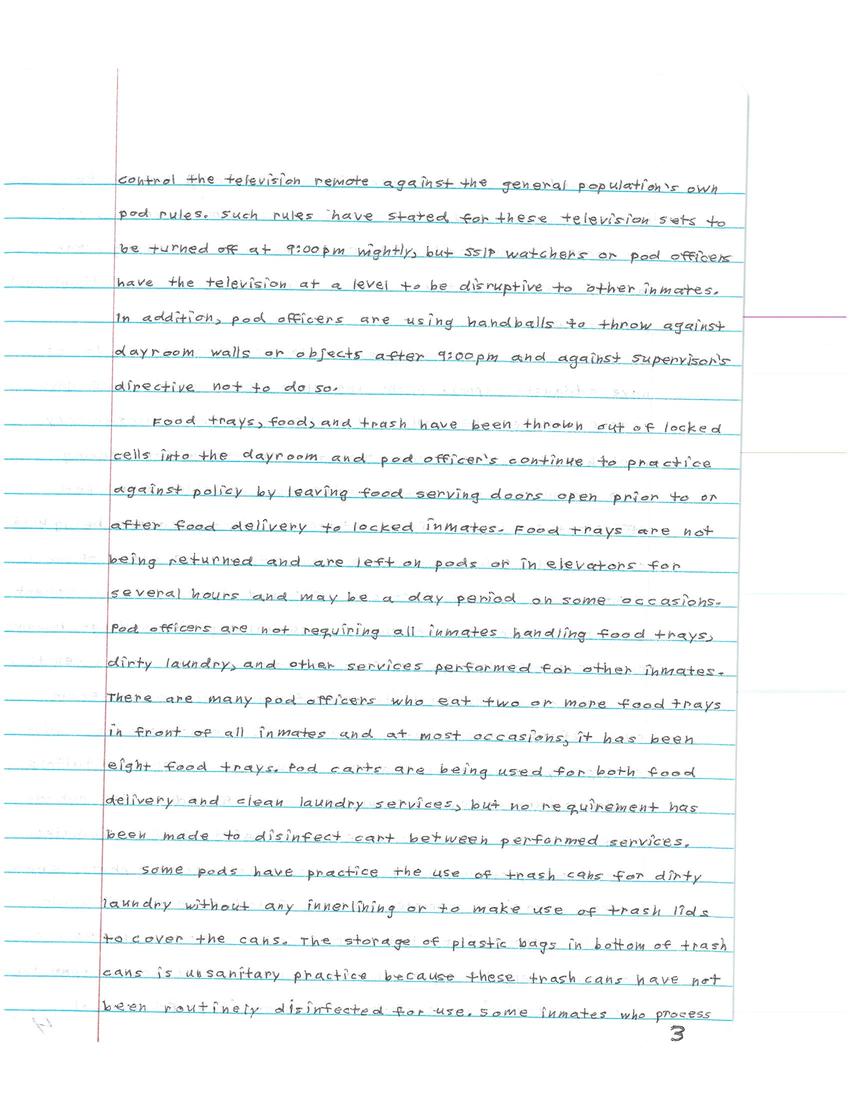 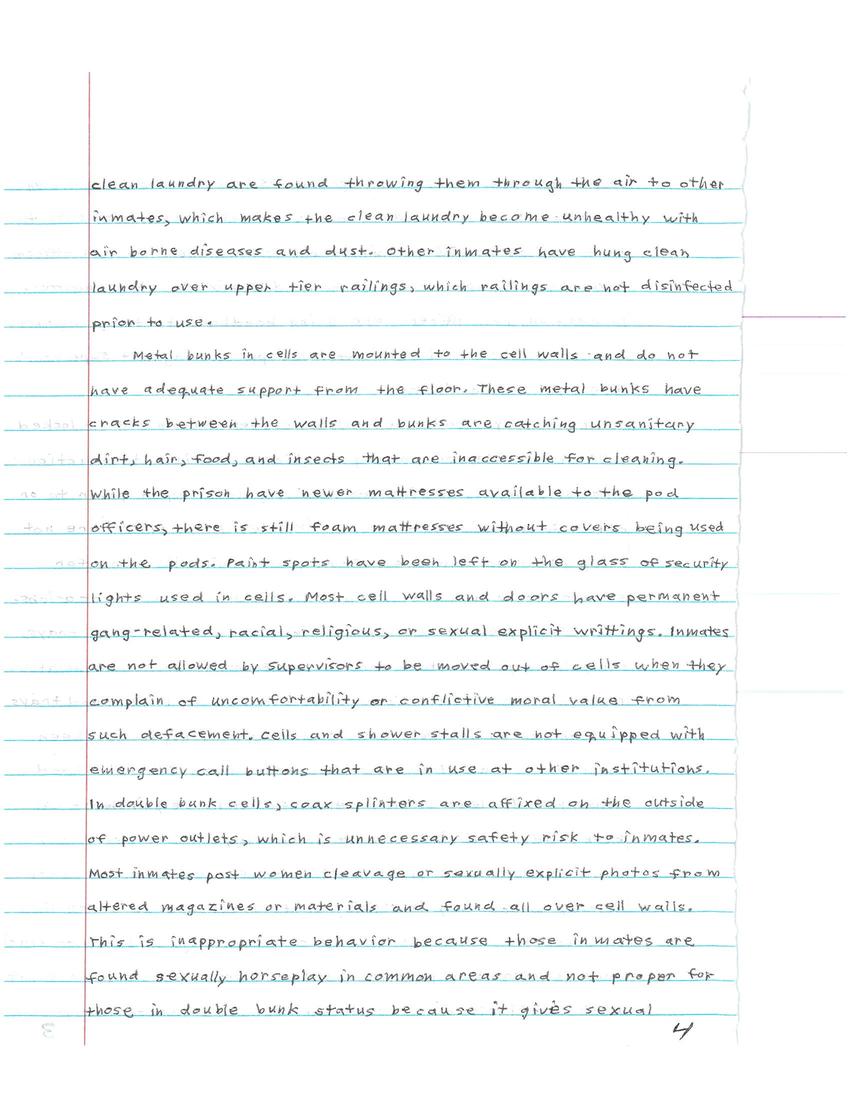 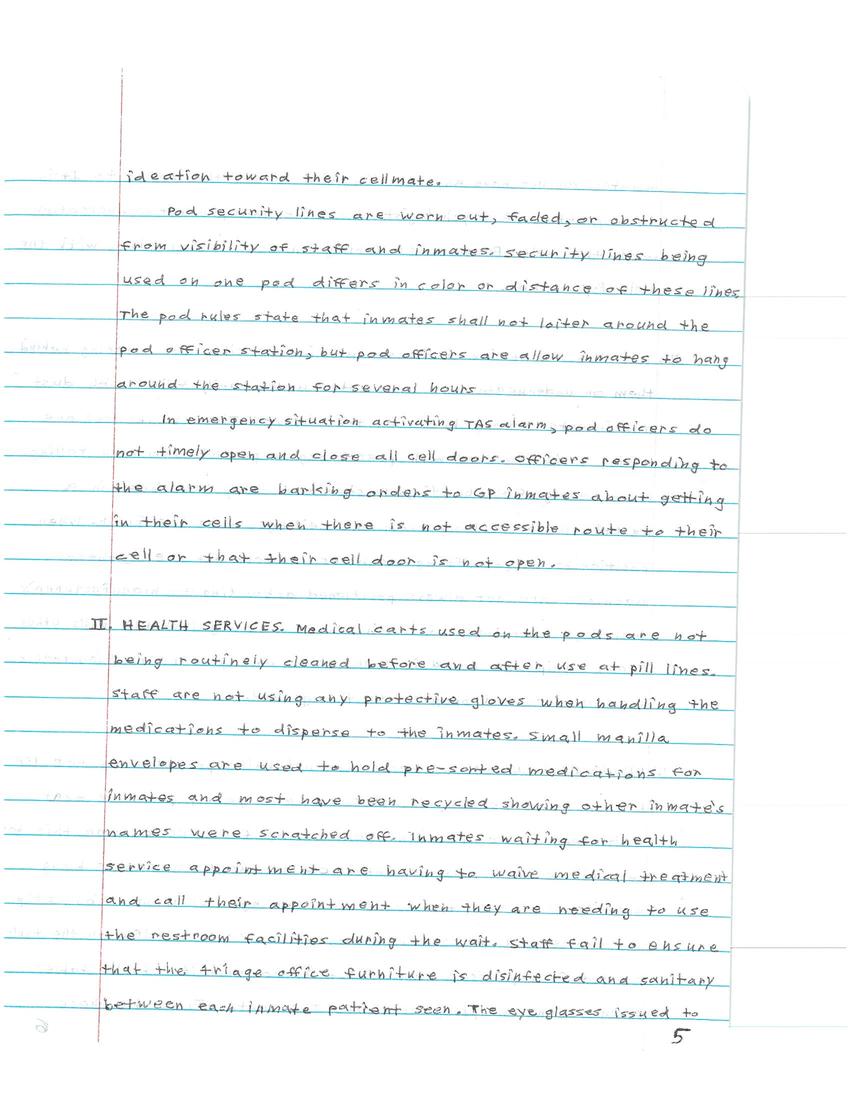 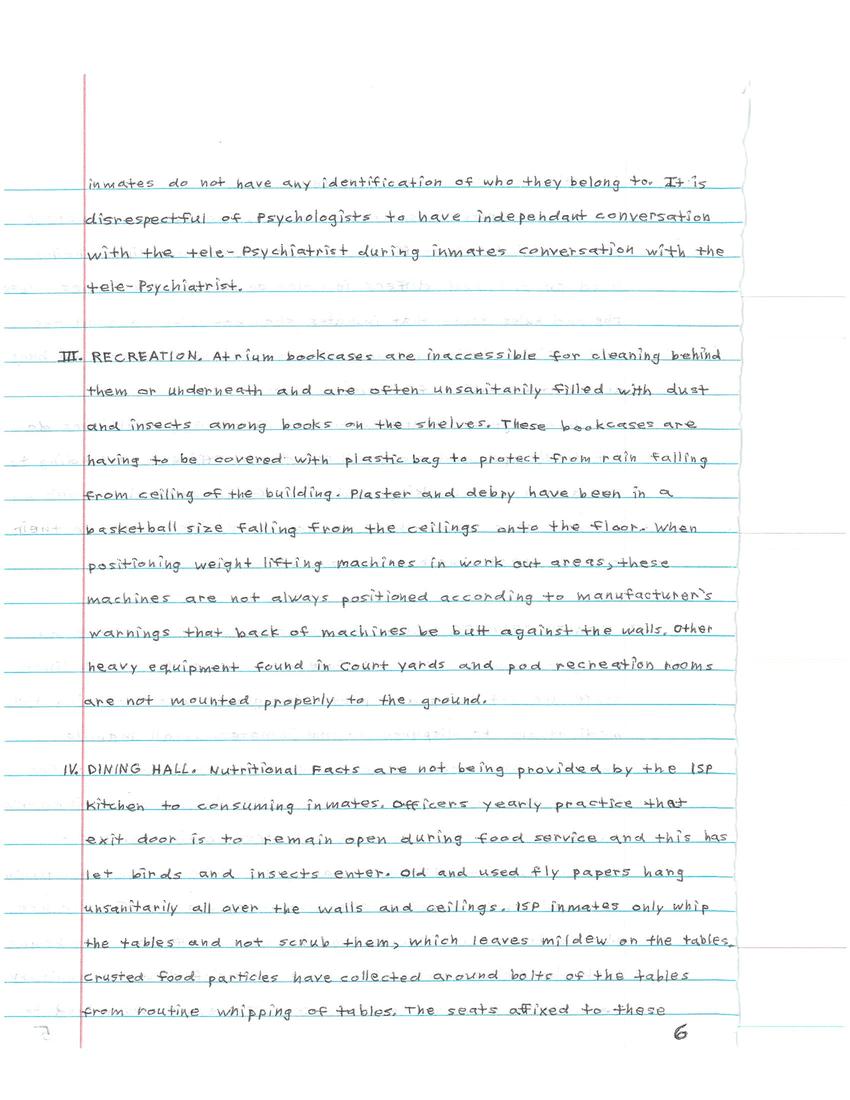 I. CELL HOURSES. In the CCU's dayrooms, tables are not leveled and mounted properly to the floor. The chemical seal used for metallic paint on most of these tables has been floor wax, which is unhealthy for inmates using these tables. The seats affixed to tables do not have any padding and that of a minimum height of one-half inch for those disabled.

Pod surveillance cameras has not been centered properly, which creates visual blind spots. The use of paper signs obstructs a clear identification of the doors or used on door windows obstructs properly visual of surveillance cameras. Doors are not properly identified with the correct warnings, such as hazardous areas, and are not being used by their identification. Posted directives warning inmates that they be subjected to a report are not being properly followed when dealing with these inmates. Maintenance closets found between inmate cells are not properly identified for use.

No or little friction strips are found on ledges, stairs, nor in the bottom of the shower stalls. There are no floor drains found outside upper shower facilities that are found only in lower shower areas. Ineffective or no water filters are in pod kitchens or in cell sinks, resulting in unhealthy risk of lead and mold from inner pipelines. Hot water in shower facilities has an imbalance of temperature among all the pods, leaving some pods receiving ice cold water. The bottom of shower stalls are dented in the metal used which can cause slipping or falling issues when stepping inside. Most cell sinks have lime-crusted around faucets. From tap water use and ordinary chemical agents are ineffective.

Chemical containers are not properly identified for all chemicals it contains and are being mixed with other chemicals from recycling use. These containers should not need to be recycled for any chemical agent after use, but when recycled, the chemical inside should correspond to the label. Eye washing sink are not properly equipped for water draining and no instructions are posted for use.

Dayroom televisions are being used by pod officers to increase volume so as to cover up locked inmates disruptive behavior. If this fails to cease inmates' misbehavior, the pod officers would change to channel to what would please locked inmates. The ISP watchers for SSIP inmates are allowed to touch and control the television remote against the general population's own pod rules. Such rules have stated for these television sets to be turned off at 9:00 PM nightly, but SSIP watchers or pod officers have the television at a level to be disruptive to other inmates. In addition, pod officers are using handballs to throw against dayroom walls or objects after 9:00 PM and against supervisor's directive not to do so.

Food trays, food, and trash have been thrown out of locked cells into the dayroom and pod officers continue to practice against policy by leaving food serving doors open prior to or after food delivery to locked inmates. Food trays are not being returned and are left on pods or in elevators for several hours are not requiring all inmates handling food trays, dirty laundry, and other services performed for other inmates. There are many pod officers who eat two or more food trays in front of all inmates and at most occasions, it has been eight food trays. Pod carts are being used for both food delivery and clean laundry services, but no requirements has been made to disinfect cart between these services.

Some pods have practiced the use of trash cans for dirty laundry without any plastic bags inner-lining the bottom of the trash cans. The storage of plastic bags in the bottom of the trash cans is unsanitary practice because these trash cans have not been routinely disinfected for use. Some inmates who process clean laundry are found throwing them through the air to other inmates, which makes the clean laundry unsanitary with airborne diseases and dust. Other inmates have hung clean laundry over upper tier railings, which railings are not disinfected prior to use.

Metal bunks in cells are mounted to the cell walls and do not have adequate support from the floor. These metal bunks have cracks between the walls and bunks are catching unsanitary dirt, hair, food, and insects that are inaccessible for cleaning. While the prison does have newer mattresses available to the pod officers, there are still foam mattresses without covers being used in the pods. Paint spots have been left on the glass of security lights used in cells. Most cell walls and doors have permanent gang-related, racial, religious, or sexually explicit writings. Inmates are not allowed to be moved out of cells when they complain of uncomfortable or conflicting moral values from such defacement. Cells and shower stalls are not equipped with emergency cell buttons that are in use at other institutions. In double bunk cells, coax splinters are affixed on the outside of power outlets, which is unnecessary safety risk to inmates. Most inmates post women cleavage or sexually explicit photos from altered magazines or materials and found all over cell walls. This is inappropriate behavior because those inmates commonly find sexual horseplay that is not proper for double bunks because it gives sexual ideation toward their cellmates.

Pod security lines are worn out, faded, or obstructed from visibility of staff and inmates. Security lines being used on one pod differs in color or distance of these lines. The pod rules state that inmates shall not loiter around the pod officer station, but pod officers have allowed inmates to hang around the station for several hours.

In emergency situation activating TAS alarm, pod officers do not timely open and close all cell doors. Officers responding to the alarm are barking orders to GP officers about getting in their cells when there is no accessible route to their cell or their cell door is closed.

II. HEALTH SERVICES. Medical carts used on the pods are not being routinely cleaned before and after use at pill lines. Staff are not using any protective gloves when handling the medications to dispense to the inmates. Small manila envelopers are used to hold presented medications for inmates and most have been recycled, showing other inmates' names that were scratched off. Inmates waiting for health service appointments are having to waive medical treatment and call their appointment when they are using the restroom during the wait. Staff fail to ensure that the triage office furniture is disinfected and sanitary between each inmate patient soon. The eyeglasses issued to inmates do not have any identification of who they belong to. It is disrespectful of psychologists to have independent conversation with the tele-psychiatrist.

III. RECREATION. Atrium bookcases are inaccessible for cleaning behind them or underneath and are often filled with unsanitary dust and insects among books on the shelves. These bookcases are having to be covered with plastic bags to protect them from rain falling from the ceiling. Plaster and debris have been in a basketball size falling from the ceiling to the floor. When positioning weight lifting machines in the workout areas, these machines are not always positioned according to manufacturer's warnings that the back of the machines be butt against the walls. Other heavy equipment found in courtyards and pod recreation rooms are not mounted properly to the ground.

IV. DINING HALL. Nutritional facts are not being provided by the ISP kitchen to consuming inmates. Officers yearly practice that exit door is to remain open during food service, and this has let birds and insects enter. Old and used fly papers hang all over the walls and ceilings. ISP inmates only wipe the tables and not scrub them, which leaves mildew on the tables. Crusted food particles have collected around bolts of the tables from routine wiping of tables. The seats affixed to these dining tables are not leveled or mounted properly, and some seats are missing out of the tables. Dirt and debris have been falling from ceilings onto the tables and food.

V. LOCKED INMATES. Shift supervisors, counselors, and psychologists fail to make complete rounds or to have service be made available to all locked inmates. The inmates are not provided a way to know about all posted orders or canteen changes that have been accessible to those in the general population. They are not allowed to get filtered water from the pod kitchen rather than from the lime-crusted sinks in cells. They are not permitted to use toe or fingernail clippers that have been allowed for the general population.