Why Must Inmates Act Suicidal To Get Needed Help? 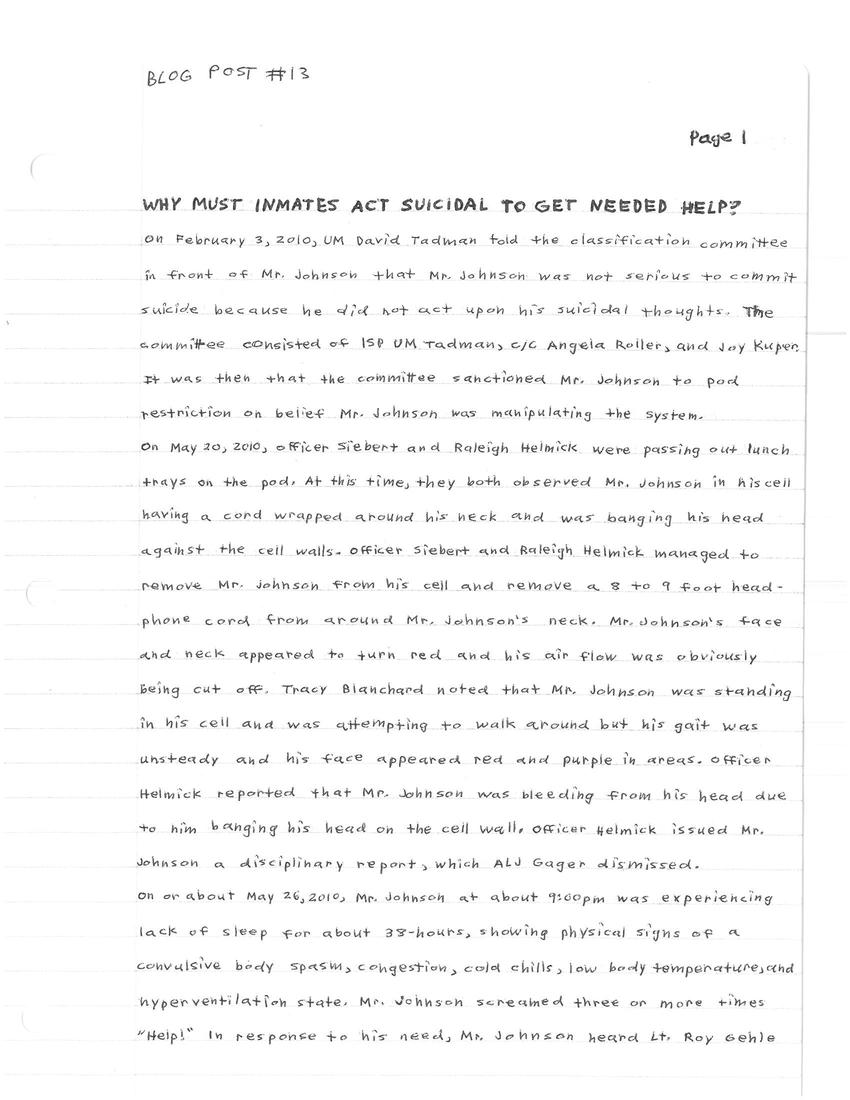 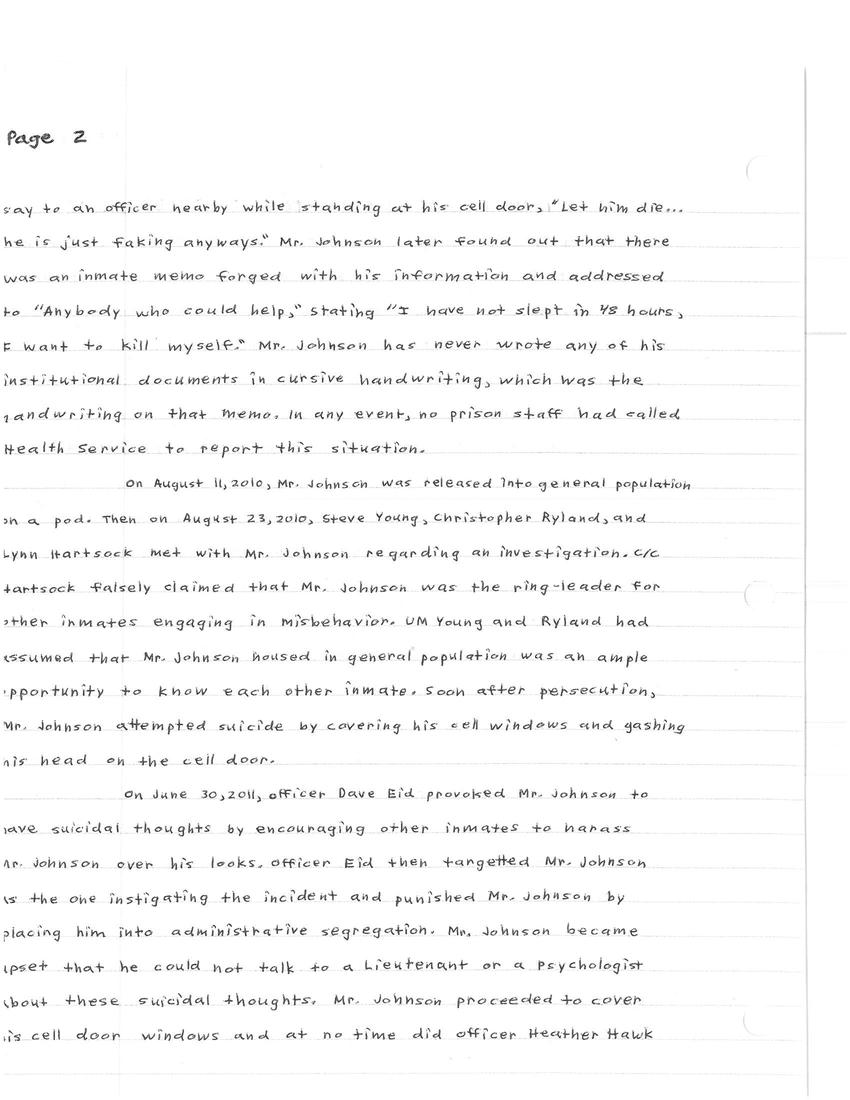 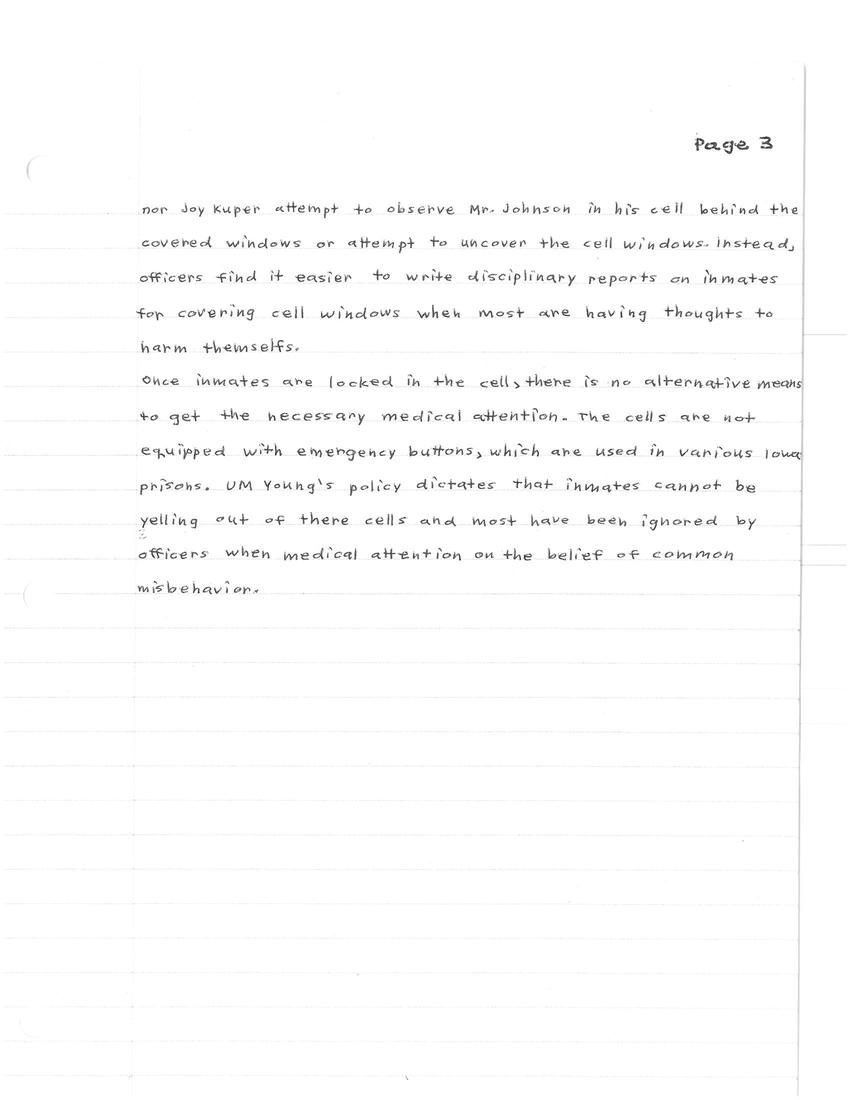 On May 20, 2010, Officer Siebert and Raleigh Helmick were passing out lunch trays on the pod. At this time, they both observed Mr. Johnson in his cell having a cord wrapped around his neck and was banging his head against the cell walls. Officer Siebert and Raleigh Helmick managed to remove Mr. Johnson from his cell and remove an 8 to 9 foot headphone cord from around Mr. Johnson's neck. Mr. Johnson's face and neck appeared to turn red and his airflow was obviously being cut off. Tracy Blanchard noted that Mr. Johnson was standing in his cell and was attempting to walk around but his gait was unsteady and his face appeared red and purple in areas. Officer Helmick reported that Mr. Johnson was bleeding from his head due to him banging his head on the cell wall. Officer Helmick issued Mr. Johnson a disciplinary report, which ALJ Gager dismissed.

On or about May 26, 2010, Mr.Johnson, at about 9.00pm was experiencing lack of sleep for about 38 hours, showing physical signs of a convulsive body spasm, congestion, cold chills, low body temperature and hyperventilative state. Mr. Johnson screamed three or more times for 'Help!'. In response to his need, Mr. Johnson heard Lt. Roy Gehle say to an officer nearby while standing at his cell door: 'Let him die... he is just faking it anyways'. Mr. Johnson later found out that there was an inmate memo forged with his information and addressed to 'Anybody who could help,' stating 'I have not slept in 48 hours, I want to kill myself.' Mr. Johnson has never wrote any of his institutional documents in cursive handwriting, which was the handwriting on that memo. In any event, no prison staff had called Health Services to report this situation.

On June 30, 2010, Officer Dave Eid provoked Mr. Johnson to have suicidal thoughts by encouraging other inmates to harass Mr. Johnson over his looks. Officer Eid then targeted Mr. Johnson as the one instigating the incident and punished Mr. Johnson by placing him into administrative segregation. Mr. Johnson became upset that he could not talk to a lieutenant or a psychologist about these suicidal thoughts. Mr. Johnson proceeded to cover his cell door windows and at no time did Officer Heather Hawk, nor Joy Kuper attempt to observe Mr. Johnson in his cell behind the covered windows or attempt to uncover them. Instead, officers find it easier to write disciplinary reports on inmates for covering cell windows when most are having thoughts to harm themselves.

Once inmates are locked in the cell, there is no alternative means to get the necessary medical attention. The cells are not equipped with emergency buttons, which are used in various Iowa prisons. UM Young's policy dictates that inmates can not be yelling out of their cells and most have been ignored by officers when [asking for] medical attention on the belief of common misbehavior.

Thanks for writing! I finished the transcription for your post.
That sounds traumatizing. I hope you are doimg better. I hope you get this. I hope you keep writing.