Keeping Up With The Jones? 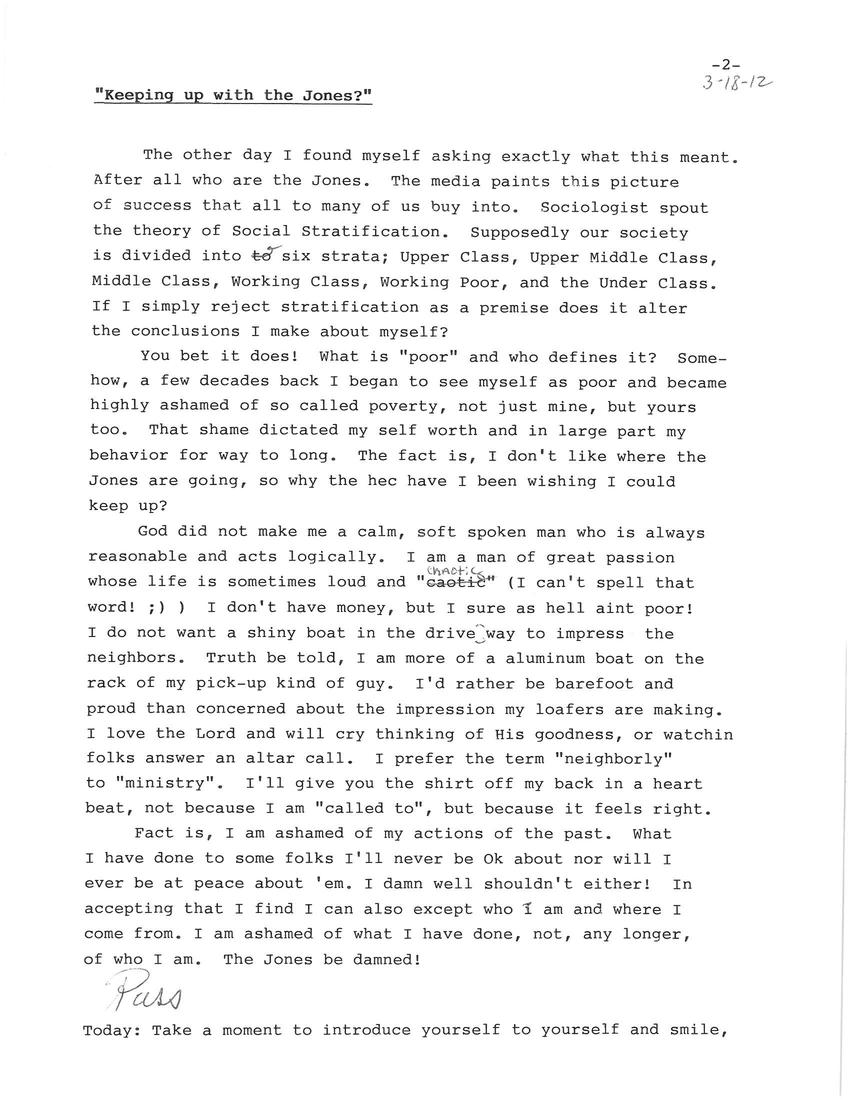 "KEEPING UP WITH THE JONES?"

The other day I found myself asking exactly what this meant. After all who are the Jones. The media paints this picture of success that all to many of us buy into. Sociologists spout the theory of Social Stratification. Supposedly our society is divided into six strata; Upper Class, Upper Middle Class, Middle Class, Working Class, Working Poor, and the Under Class. If I simply reject stratification as a premise does it alter the conclusions I make about myself?

You bet it does! What is "poor" and who defines it? Somehow, a few decades back I began to see myself as poor and became highly ashamed of so called poverty, not just mine, but yours too. That shame dictated my self worth and in large part my behavior for way to long. The fact is, I don't like where the Jones are going, so why the hec have I been wishing I could keep up?

God did not make me a calm, soft spoken man who is always reasonable and acts logically. I am a man of great passion whose life is sometimes loud and "chaotic" (I can't spell that word!;) I don't have money, but I sure as hell aint poor! I do not want a shiny boat in the driveway to impress the neighbors. Truth be told, I am more of a aluminium boat on the rack of my pick-up kind of guy. I'd rather be barefoot and proud than concerned about the impression my lofers are making. I love the lords and will cry thinking of his goodness, or watchin folks answer an altar call. I prefer the term "neigbourly" to "ministry". I'll give you the shirt off my back in a heartbeat, not because I am "called to", but because it feels right.

Fact is, I am ashamed of my actions of the past. What I have done to some folks I'll never be ok about nor will I ever be at peace about 'em. I damn well shouldn't either! In accepting that I find I can also except who I am and where I come from. I am ashamed of what I have done., not, any longer, of wo I am. The Jones be damned!

today: ake a moment to introduce yourself and smile.

Thanks for writing! I finished the transcription for your post.
Loved the Post. Its so true. A true measure of a mans success in live should not be how much he can afford to pay for his shoes but how much Joy he feels. I truly believe a person of very modest means can be richer in every sense of the word if his Joy comes from having the Lord in his life, not from the amount he can pay for his shoes. I believe the same can be said of ones surrounding, a man in prison who knows the Lord can know more real Happiness and Joy then the man who lives in a Mansion and only finds his happiness chasing the almighty dollor. Keep the posts coming.
(scanned reply – view as blog post)
uploaded April 24, 2012.  Original (PDF)