This Has Been A No Good Very Bad Day 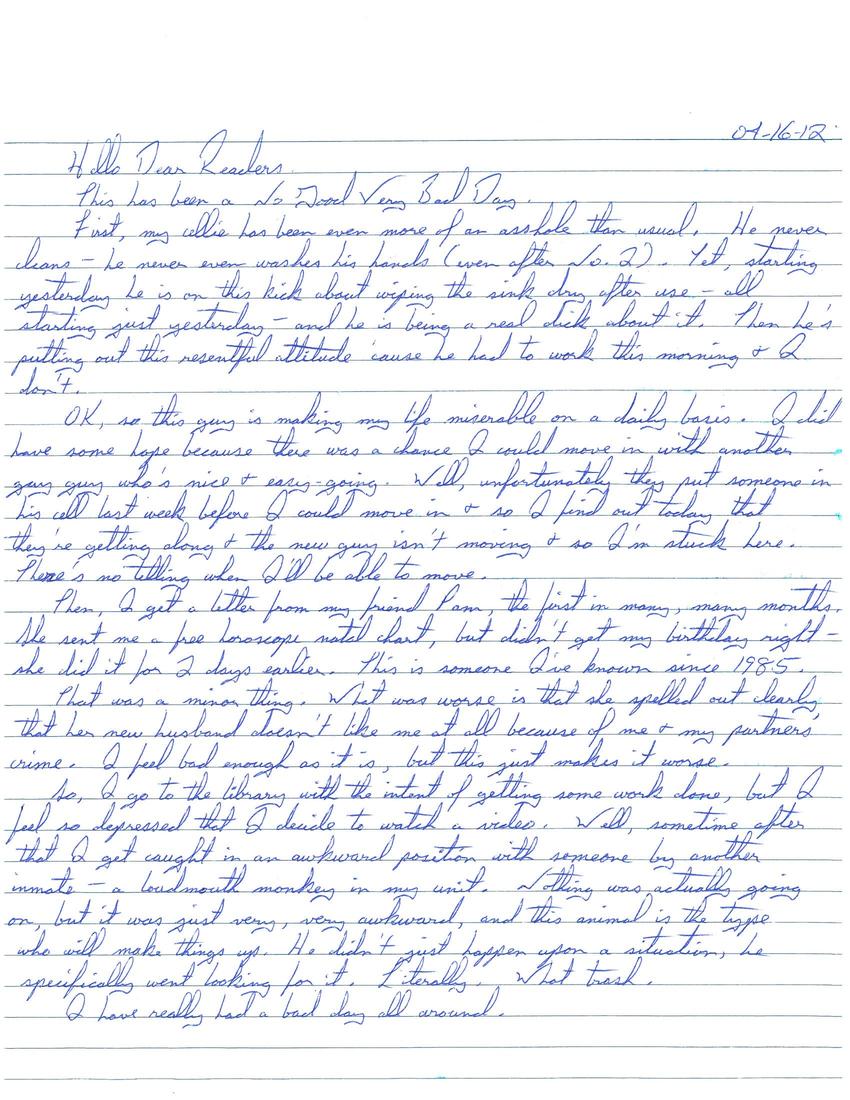 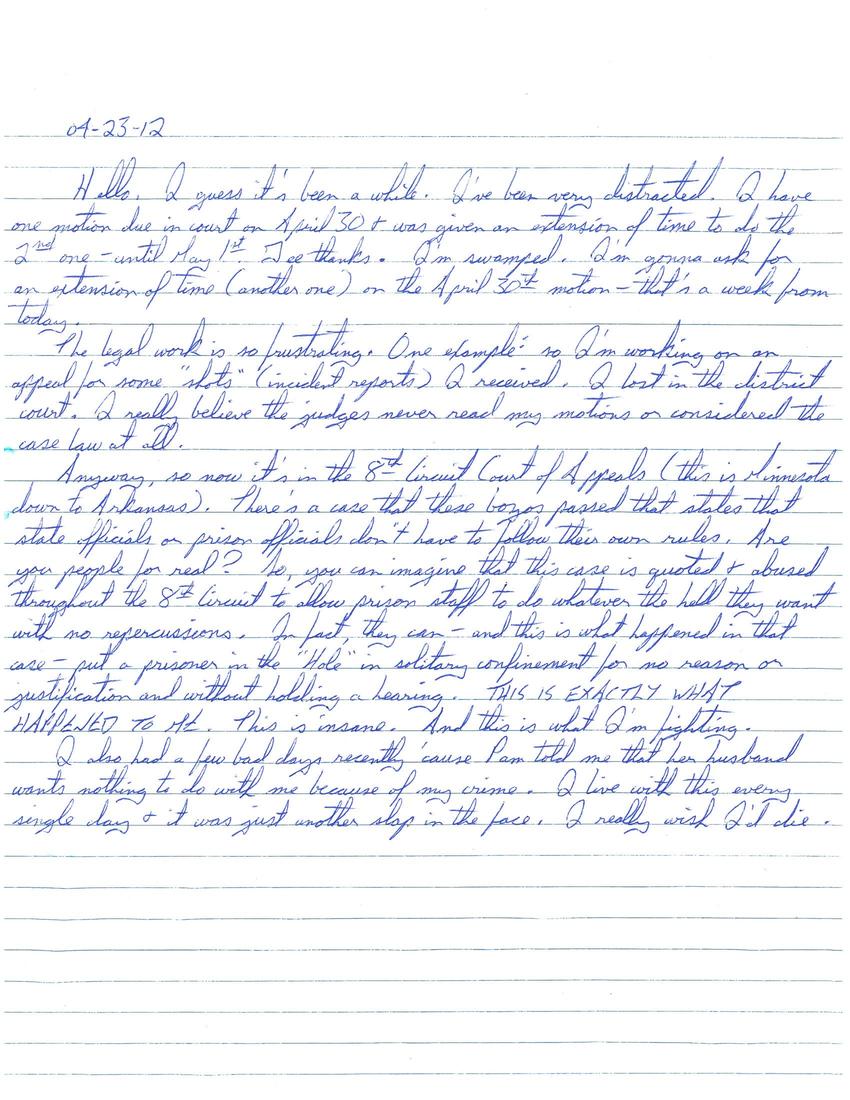 This has been a no good very bad day

First, my allie has been even more of an asshole than usual. he never clean - he never even washes his hands (even after no 2). Yet, starting yesterday he is on this kick about wiping the sink dry after use - all starting just yesterday - and he is being a real dick about it. Then he is putting out this resentful attitude cause he had to work this morning and I don't.

Ok, so this guy is making my life miserable on a daily basis. I did have some hope because there was a chance I could move in with another gay guy who's nice and easy-going. Well, unfortunately they put someone in his cell last week before I could move in and so I find out today that they're getting along and the new guy isn't moving and so I'm stuck here. There is no telling when I'll be able to move.

Then, I get a letter from my friend Pam, the first in many, many months. She sent me a free horoscope natal chart, but didn't get my birthday right - she did it for 2 days earlier. This is someone I've known since 1985.

That was a minor thing. What was worse is that she spelled out clearly that her new husband doesn't like me at all because of me and my partner's crime. I feel bad enough as it is, but this just makes it worse.

So, I go to the library with the intent of getting some work done, but i feel so depressed that I decide to watch a video. Well, sometime after that I get caught in an awkward position with someone by another inmate - a loudmouth minkey in my unit. Nothing was actually going on, but it was just very, very awkward, and this animal is the type who will make things up. He didn't just happen upon a situation, he specifically went looking for it. literally. what trash.

I have really had a bad day all round.

Hello, I guess it's been a while. I've been very distracted. I have one motion due in court on april 30 and was given an extension of time to do the 2nd one - until May 1st. Gee thanks. I'm swamped. I'm gonna ask for an extension of time (another one0 on the april 30th motion - that's a week from today.

The legal work is so frustrating. One example: I'm working on an appeal for some "shots" (incident reports) I received. I lost in the district court. I really believe the judges never read my motions or considered the case law at all.

Anyway, so now it's in the 8th circuit Court of appeals (this is minnesota doen to Arkansas). There's a case that these boyos passed that states that state officials or prison officials don't have to follow their own rules. Are you epople for real? so, you can imagine that this case is quoted and abused throughout the 8th circuit to allow prison staff to do whatever the hell they want with no repercussions. In fact they can - and this is what happened in that case - put a prisoner in the "Hole" in solitary confinement for no reason or justification and without holding a hearing. THIS IS EXACTLY WHAT HAPPENED TO ME. This is insane. And this is what I'm fighting.

I also had a few bad days recently 'cause Pam told me that her husband wants nothing to do with me because of my crime. I live with this every single day and it was just another slap in the face. I really wish I'd die.

Hey Kelly - Kim here. Read your blogs today.. enjoyed them - could not figure out where you are.. state/prison. You don't post an address - ya know for those who want to write. Just to drop this line and you can reply to this and they will post it for me. Hang in there with the new rommie - can't be easy !!! Keep writing! Have a nice afternoon Kelly.
(scanned reply – view as blog post)
uploaded June 13, 2012.  Original (PDF) 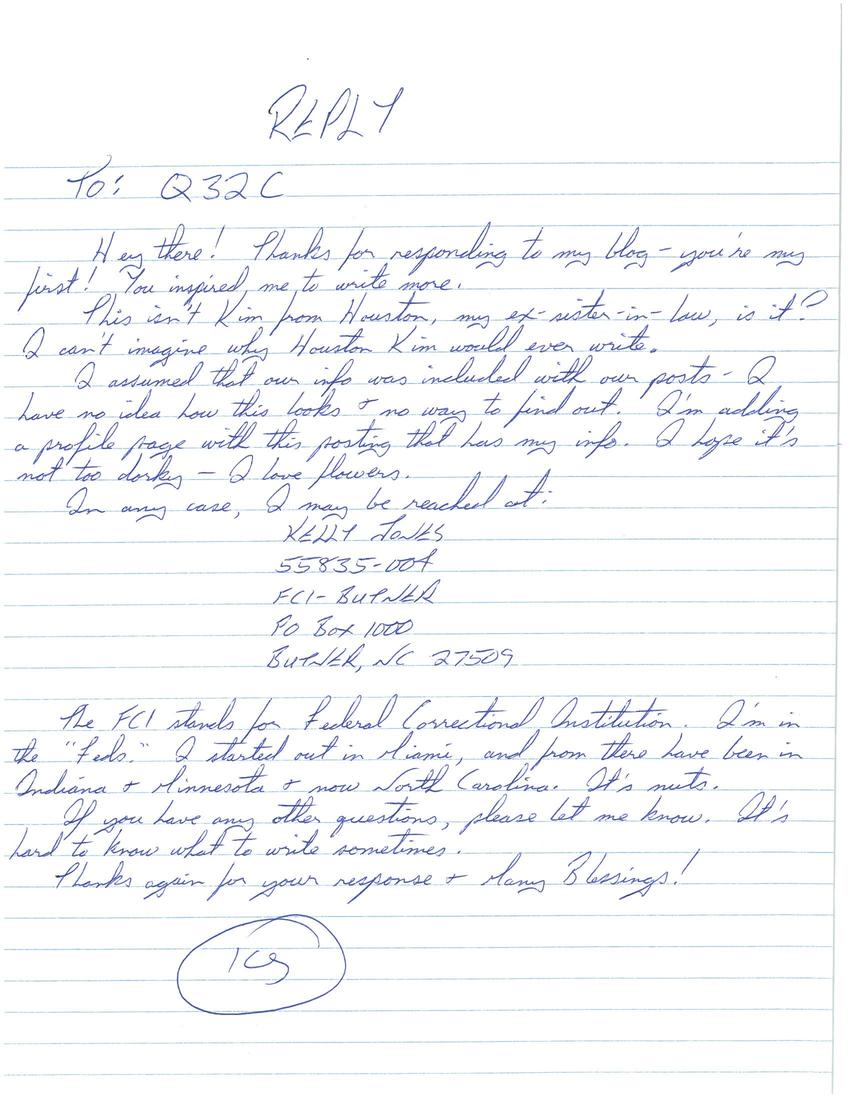