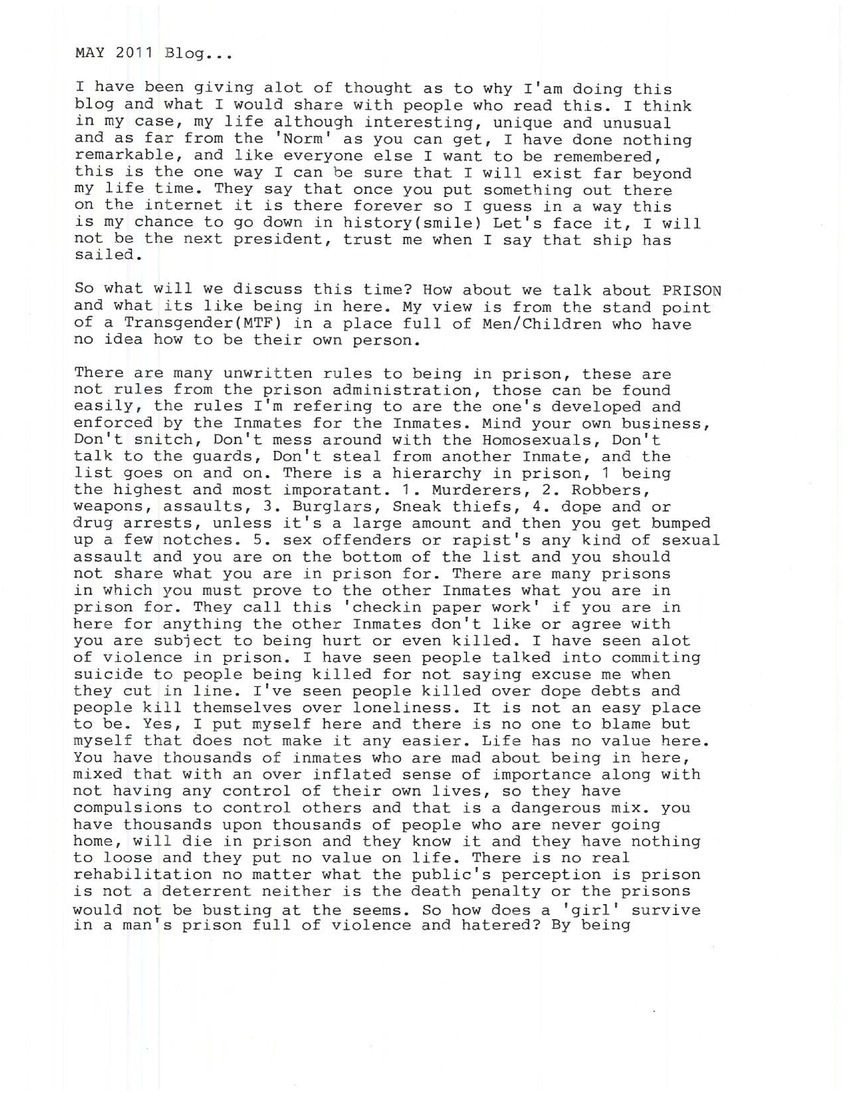 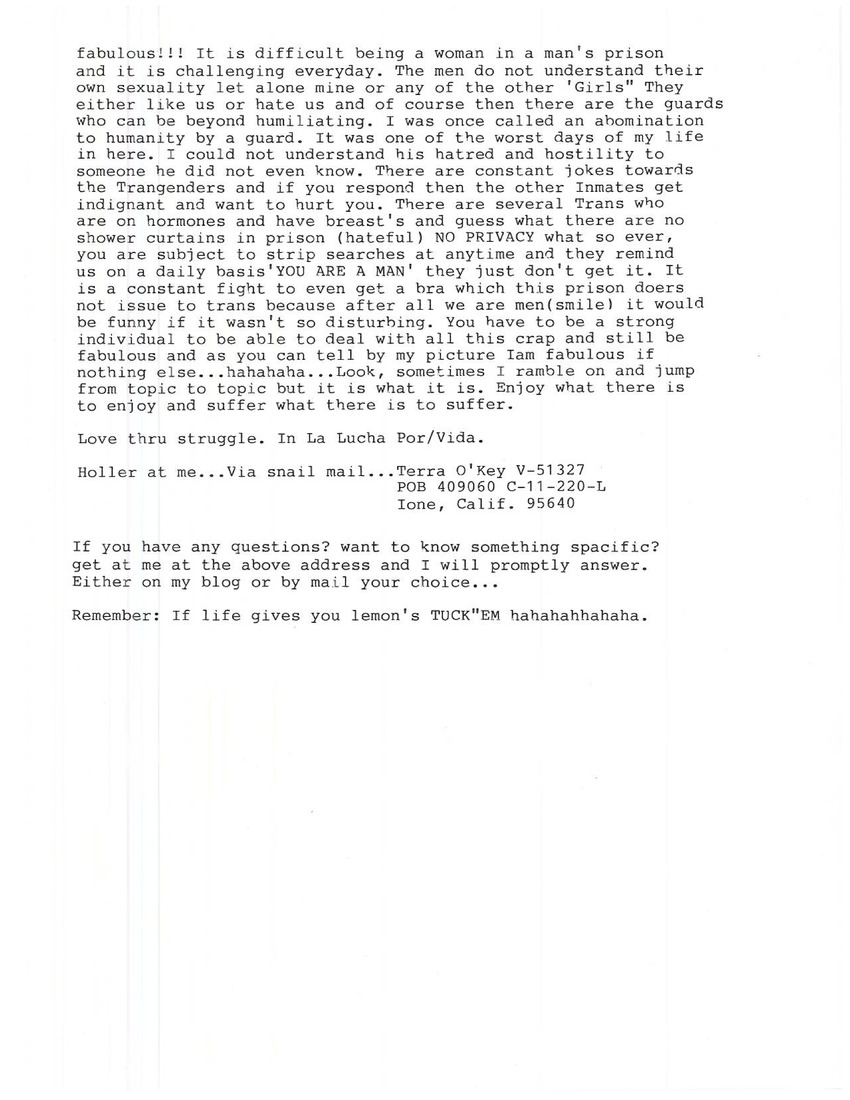 I have been giving a lot of thought as to why I'm doing this blog and what I would share with people who read this. I think in my case, my life, although interesting, unique, and unusual, and as far from the "norm" as you can get, I have done nothing remarkable. And like everybody else, I want to be remembered. This is the one way I can be sure that I will exist far beyond my lifetime. They say that once you put something out there on the Internet, it is there forever. So I guess in a way, this is my chance to go down in history. :)

Let's face it, I will not be the next president. Trust me when I say that ship has sailed.

So what will we discuss this time? How about we talk about PRISON and what it's like being in here. My view is from the standpoint of a transgender (MTF) in a place full of children who have no idea how to be their own person.

There are many unwritten rules to being in prison. These are not rules from the prison administration, those can be found easily. The rules I'm referring to are the ones developed and enforced by the inmates for the inmates.

*Mind your own business.
*Don't snitch.
*Don't mess around with the homosexuals.
*Don't talk to the guards.
*Don't steal from another inmate.

There is a hierarchy in prison, 1. being the highest and most important.

1. Murderers
2. Robbers, weapons, assaults
3. Burglars, sneak thieves
4. Dope or drug arrests, unless it's a large amount. Then you get bumped up a few notches.
5. Sex offenders or rapists. Sexual assault of any kind is on the bottom of the list.

I have seen a lot of violence in prison. I have seen people talked into committing suicide to people being killed for not saying "Excuse me" when they cut in line. I've seen people killed over dope debts, and people kill themselves over loneliness. It is not an easy place to be. Yes, I put myself in here and there is no one to blame but myself. That does not make it easier. Life has no value here. You have thousands of inmates who are mad about being here. Mix that with an overinflated sense of importance along with not having any control over their own lives, so they have a compulsive urge to control other lives. It's a dangerous mix. You have thousands upon thousands of people who are never going home, will die in prison (and they know it), with nothing to lose. They put no value on life.

There is no real rehabilitation, no matter what the public's perception is. Prison is not a deterrent. Neither is the death penalty. Otherwise the prisons would not be busting at the seams.

So how does a girl survive in a man's prison full of violence and hatred? By being fabulous!

it is difficult being a woman in a man's prison, and it is challenging every day. The men do not understand their own sexuality, let alone mine or any of the other girls. They either like us or hate us, and of course, there are the guards who can be beyond humiliating. I was once called an abomination to humanity by a guard. It was one of the worst days of my life in here. I could not understand his hatred and hostility to someone he did not even know. There are constant jokes towards the transgenders. Respond, and the other inmates get indignant and want to hurt you.

There are several trans who are on hormones and have breasts. Guess what? There are no shower curtains in prison (hateful). NO PRIVACY whatsoever. You are subject to strip searches at any time, and they remind us on a daily basis: "YOU ARE A MAN." They just don't get it. It is a constant fight to even get a bra, which this prison deems not an issue because, after all, we are men. :) It would be funny if it weren't so disturbing.

You have to be a strong individual to deal with all of this crap and still be fabulous. As you can tell by my picture, I am fabulous if nothing else. Hahaha....

Holler at me via snail mail.

Have any questions? Want to know something specific? Get at me at the above address and I will promptly answer. Either on my blog or through mail by your choice.

wow, you MUST be fabulous!

being forced to be in a mens prison as a woman is something ive never thought of as a trans ally, how do you keep your head above water?

i dont think you should put quotes around the feminine pronouns you identify by! telling a transwoman that she is not a woman is just like tellling a little girl that she cant be anything she wants to be.