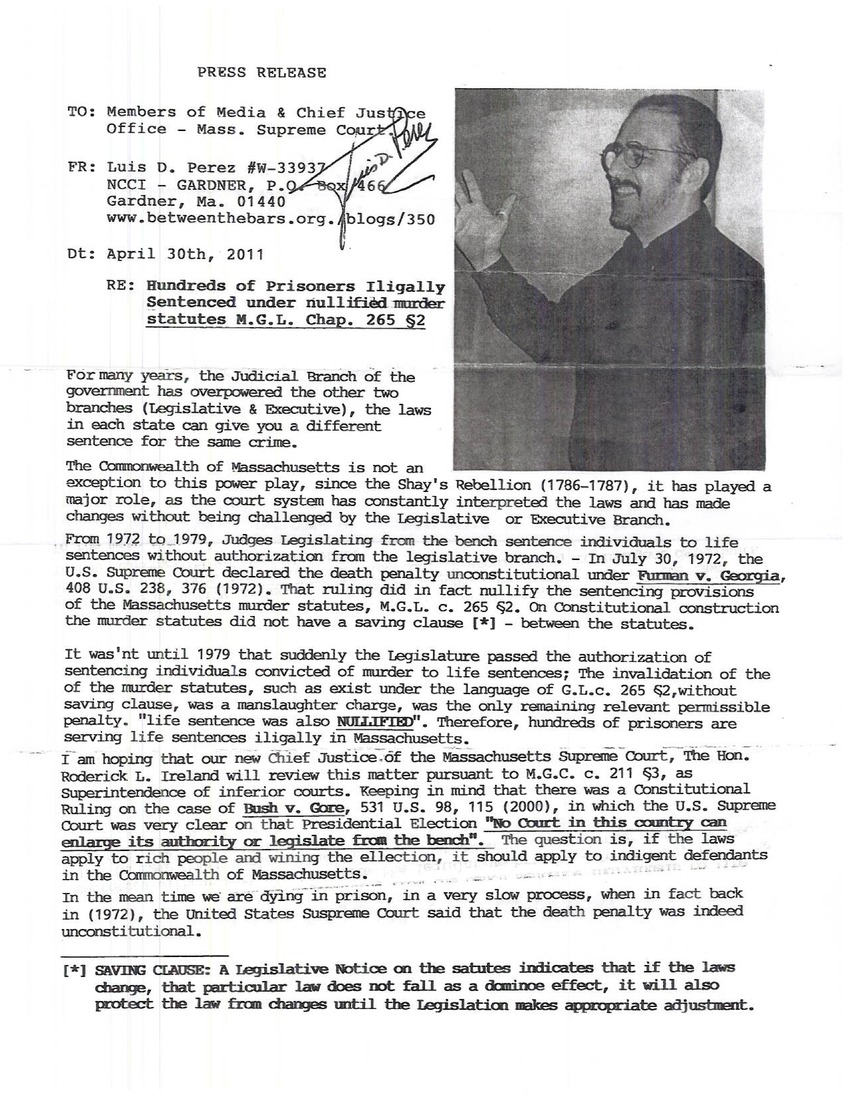 For many years, the Judicial Branch of the government has overpowered the other two branches (Legislative & Executive), the laws in each state can give you a different sentence for the same crime.

The Commonwealth of Massachusetts is not an exception to this power play, since the Shay's Rebellion (1786-1787), it has played a major role, as the court system has constantly interpreted the laws and has made changes without being challenged by the Legislative or Executive Branch.

From 1972 to 1979, Judges Legislating from the bench sentence individuals to life sentences without authorization from the legislative branch. - In July 30, 1972, the U.S. Supreme Court declared the death penalty unconstitutional under Furman v. Georgia, 408 U.S. 238, 376 (1972). That ruling did in fact nullify the sentencing provisions of the Massachusetts murder statutes, M.G.L. c. 265 2. On Constitutional construction the murder statutes did not have a saving clause [*] - between the statutes.

It wasn't until 1979 that suddenly the Legislature passed the authorization of sentencing individuals convicted of murder to life sentences; The invalidation of the murder statutes, such as exist under the language of G.L.c. 265 2, without saving clause, was a manslaughter charge, was the only remaining relevant permissible penalty. "life sentence was also NULLIFIED". Therefore, hundreds of prisoners are serving life sentences illegally in Massachusetts.
I am hoping that our new Chief Justice of the Massachusetts Supreme Court, The Hon. Roderick L. Ireland will review this matter pursuant to M.G.C. c. 211 3, as Superintendence of inferior courts. Keeping in mind that there was a Constitutional Ruling on the case of Bush v. Gore, 531 U.S. 98, 115 (2000), in which the U.S. Supreme Court was very clear on that Presidential Election "No Court in this country can enlarge its authority or legislate from the bench". The question is, if the laws apply to rich people and winning the election, it should apply to indigent defendants in the Commonwealth of Massachusetts.
In the mean time we are dying in prison, in a very slow process, when in fact back in (1972), the United States Supreme Court said that the death penalty was indeed unconstitutional.

[*] SAVING CLAUSE: A Legislative Notice on the statutes indicates that if the laws change, that particular law does not fall as a domino effect, it will also protect the law from changes until the Legislation makes appropriate adjustment.