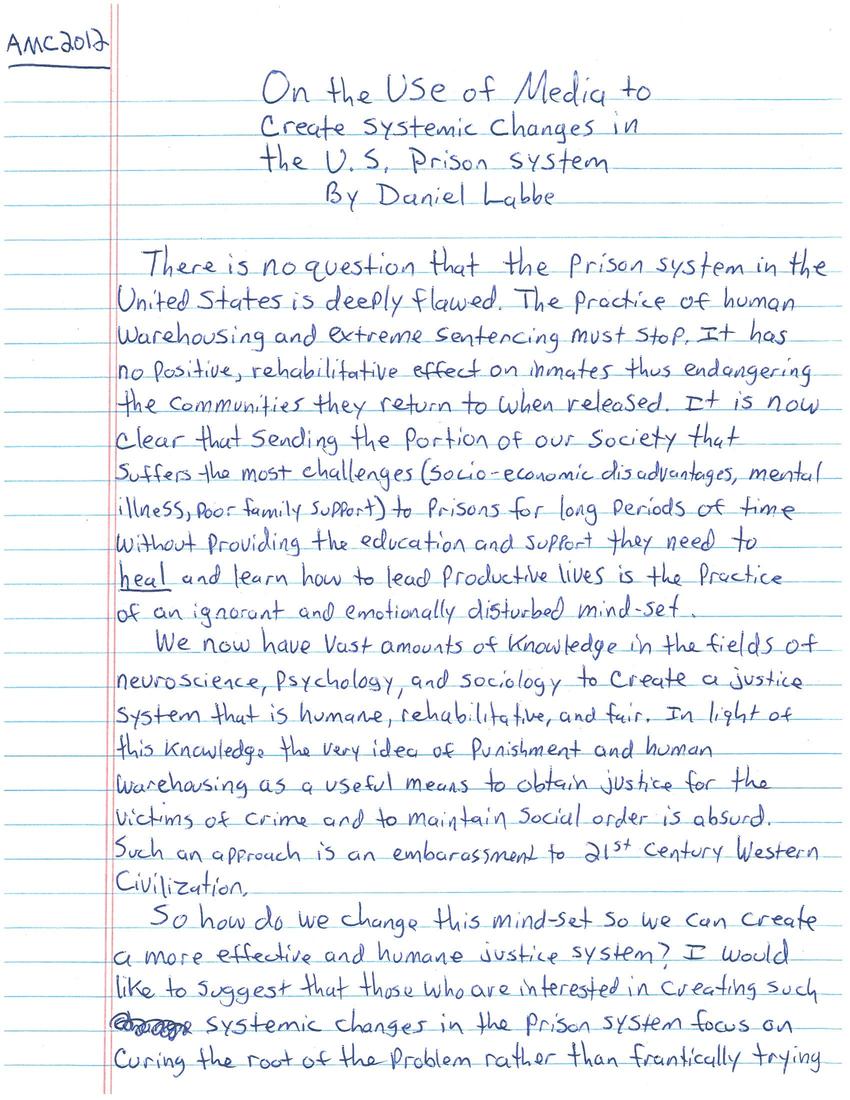 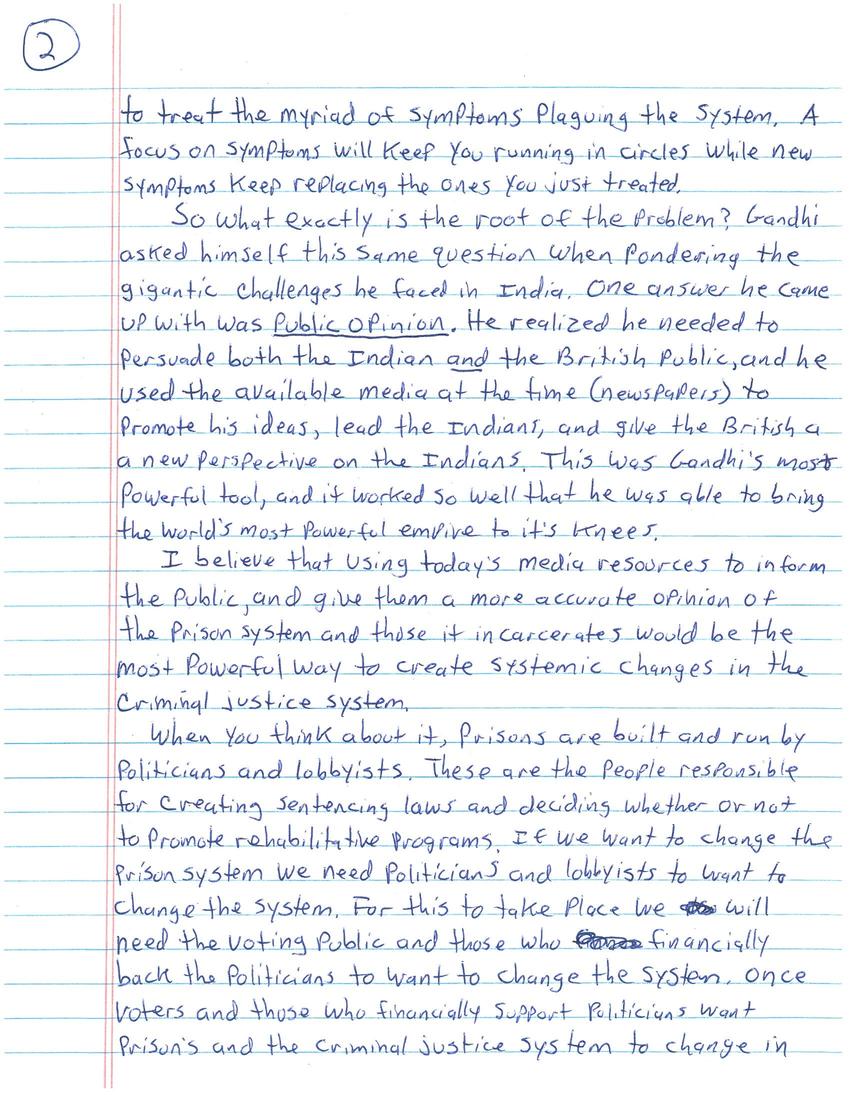 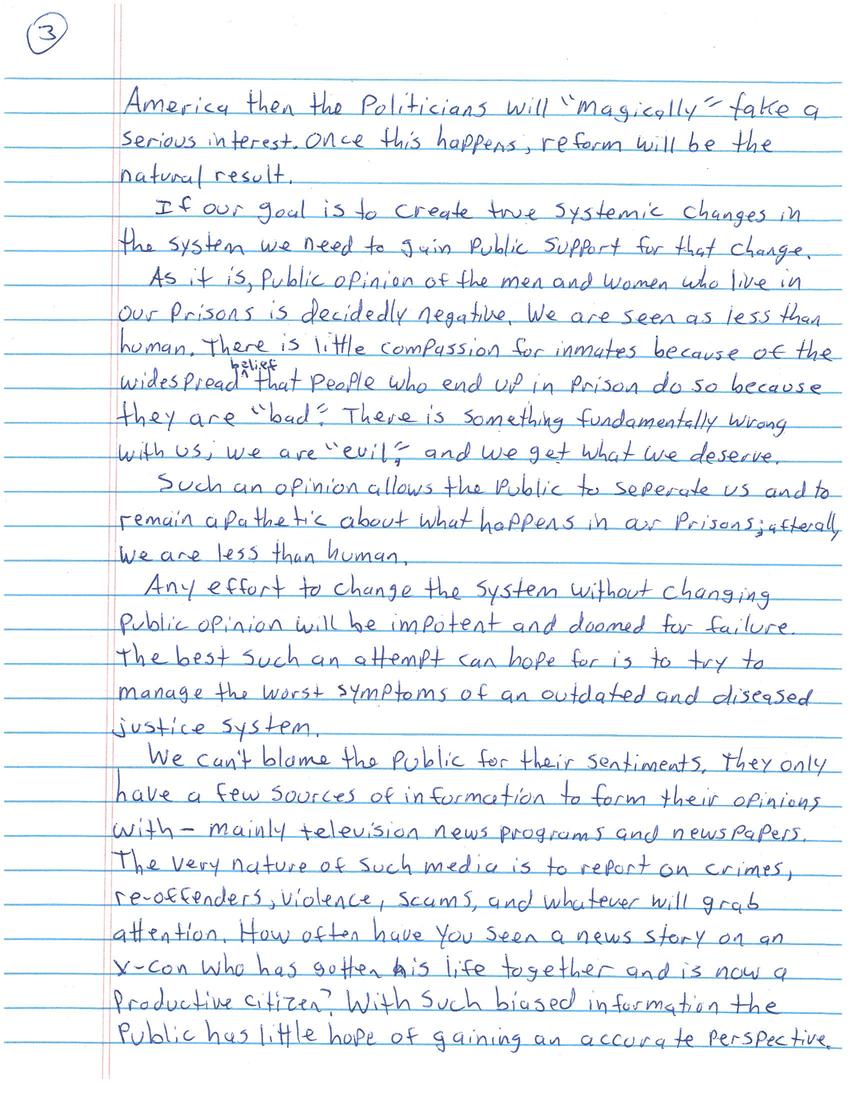 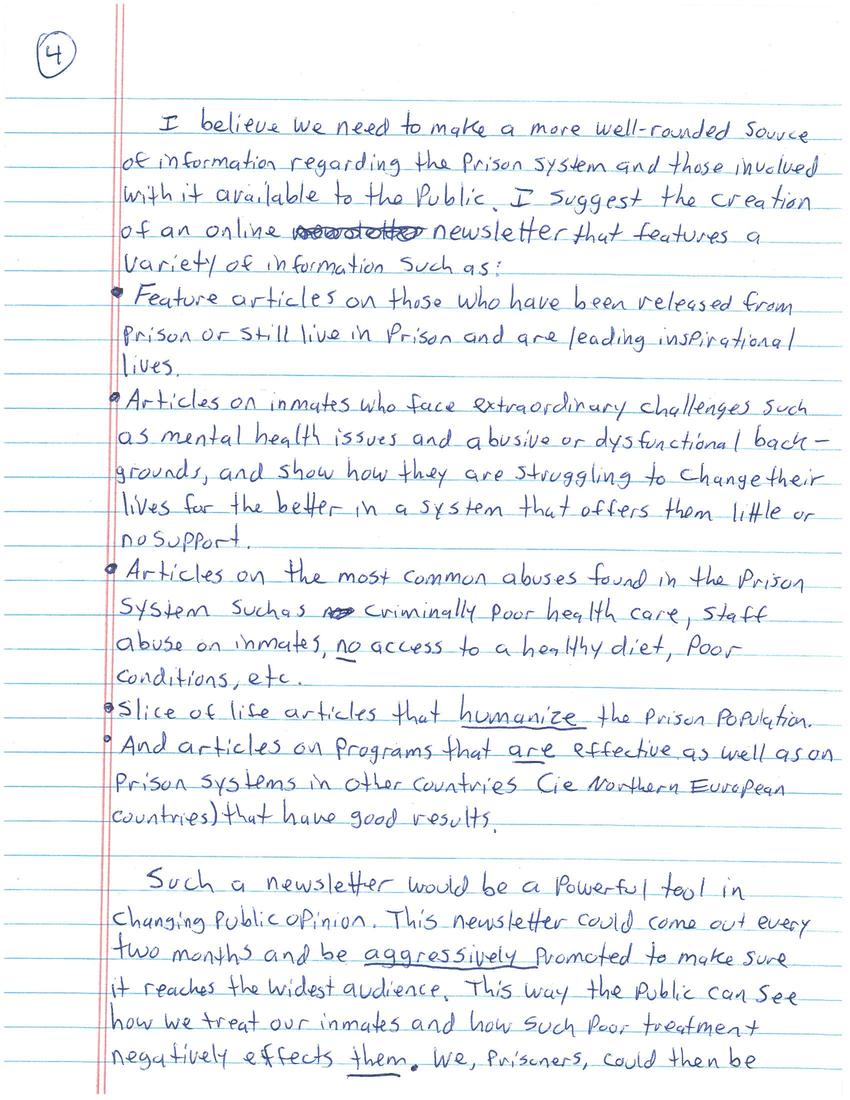 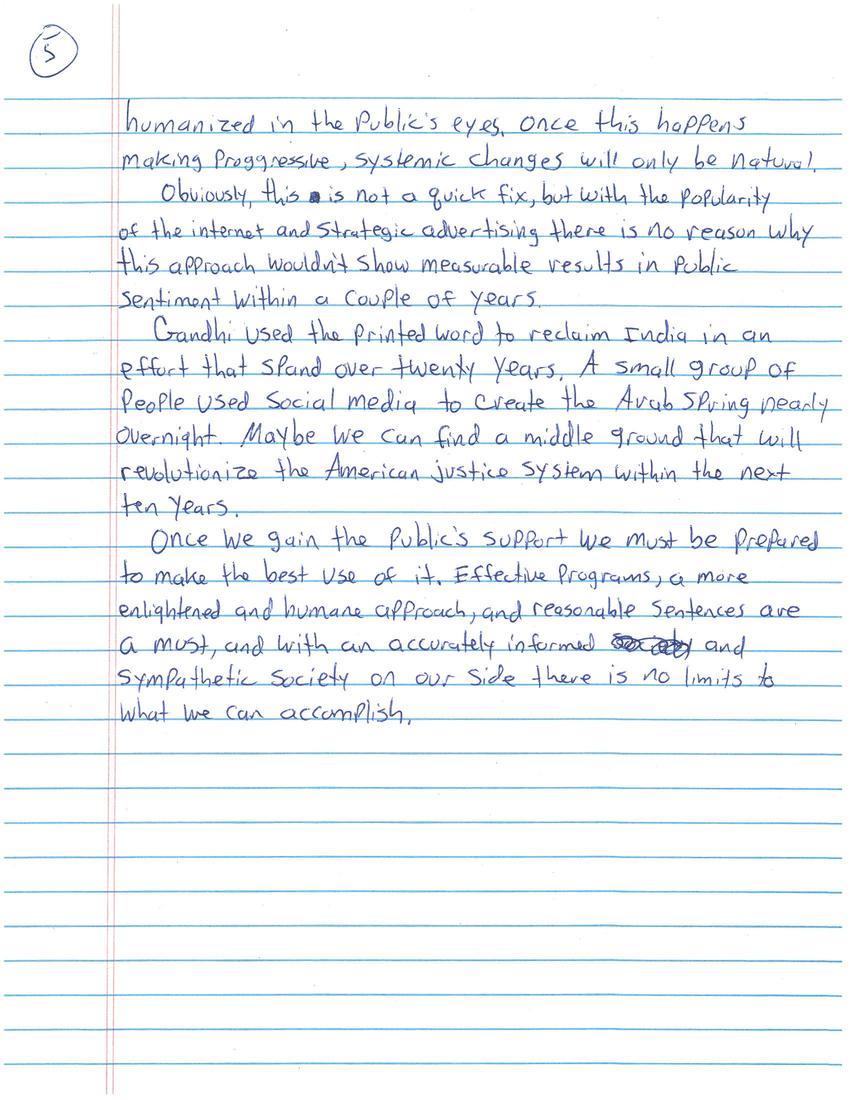 On the Use of Media to Create systemic changes in the U.S. Prison system
By Daniel Labbe

There is no question that the prison system in the United States is deeply flawed. The practice of human warehousing and extreme sentencing must stop. It has no positive, rehabilitative effect on inmates thus endangering the communities they return to when released. It is now clear that sending the portion of our society that suffers the most challenges (socio-economic disadvantages, mental illness, poor family support) to prisons for long periods of time without providing the education and support they need to heal [underlined] and learn how to lead productive lives is the practice of an ignorant and emotionally disturbed mind-set.

We now have vast amounts of knowledge in the fields of neuroscience, psychology, and sociology to create a justice system that is humane, rehabilitative, and fair. In light of this knowledge the very idea of punishment and human warehousing as a useful means to obtain justice for the victims of crime and to maintain social order is absurd. Such an approach is an embarrassment to 21st century Western civilization.

So how do we change this mind-set so we can create a more effective and humane justice system? I would like to suggest that those who are interested in creating such systemic changes in the prison system focus on curing the root of the problem rather than frantically trying to treat the myriad of symptoms plaguing the system. A focus on symptoms will keep you running in circles while new symptoms keep replacing the ones you just treated.

So what exactly is the root of the problem? Gandhi asked himself this same question when pondering the gigantic chalenges he faced in India. One answer he came up with was public opinion [underlined]. He realized he needed to persuade both the Indian and the British public, and he used the available media at the time (newspapers) to promote his ideas, lead the Indians, and give the British a new perspective on the Indians. This was Gandhi's most powerful tool, and it worked so well that he was able to bring the world's most powerful empire to its knees.

i believe that using today's media resources to inform the public, and give them a more accurate opinion of the prison system and those it incarcerates would be the most powerful way to create systemic changes in the criminal justice system.

If our goal is to create true systemic changes in the system we need to gain public support for that change.

As it is, public opinion of the men and women who live in our prisons is decidedly negative. We are seen as less than human. There is little compassion for inmates because of the widespread belief that people who end up in prison do so because they are "bad". There is something fundamentally wrong with us, we are "evil," and we get what we deserve.

Such an opinion allows the public to separate us and to remain apathetic about what happens in our prisons; after all, we are less than human.

Any effort to change the system without changing public opinion will be impotent and doomed for failure. The best such an attempt can hope for is to try to manage the worst symptoms of an outdated and diseased justice system.

We can't blame the public for their sentiments. They only have a few sources of information to form their opinions with-mainly television news programs and newspapers. The very nature of such media is to report on crimes, re-offenders, violence, scams, and whatever will grab attention. How often have you seen a news story on an ex-con who has gotten his life together and is now a productive citizen? With such biased information the public has little hope of gaining an accurate perspective.

I believe we need to make a more well-rounded source of information regarding the prison system and those involved with it available to the public. I suggest the creation of an online newsletter that features a variety of information such as:

-Feature articles on those who have been released from prison or still live in prison and are leading inspirational lives.

-Articles on inmates who face extraordinary challenges such as mental health issues and abusive or dysfunctional backgrounds, and show how they are struggling to change their lives for the better in a system that offers them little or no support.

-Article s on the most common abuses found in the prison system such as criminally poor health care, staff abuse on inmates, no[underlined] acces to a healthy diet, poor conditions, etc.

-Slice of life articles that humanize[underline] the prison population.

-And articles on programs that are [underlined] effective as well as on prison systems in other countries (ie Northern European countries) that have good results.

Such a newsletter would be a powerful tool in changing public opinion. This newsletter could come out every two months and be aggressively [underlined] promoted to make sure it reaches the widest audience. This way the public can see how we treat our inmates and how such poor treatment negatively effects them[underlined]. We, prisoners, could then be humanized in the public's eyes. Once this happens making progressive, systemic changes will only be natural.
Obviously, this is not a quick fix, but with the popularity of the internet and strategic advertising there is no reason why this approach wouldn't show measureable results in public sentiment within a couple of years.

Gandhi used the printed word to reclaim India in an effort that spanned over twenty years. A small group of people used social media to create the Arab Spring nearly overnight. Maybe we can find a middle ground that will revolutionize the American justice system within the next ten years.

Once we gain the public's support we must be prepared to make the best use of it. Effective programs, a more enlightened and humane approach, and reasonable sentences are a must, and with an accurately informed and sympathetic society on our side there is no limites to what we can accomplish.

You brought up some really wonderful points about the prison system. I agree completely with you about the importance of media in educating communities. Thank you so much for expressing yourself it is incredibly enlightening.
Hi Daniel-

We read your letter at the Allied Media Conference in Detroit. I liked your ideas. Who do you suggest would be responsible for deciding which articles to include in the newsletter and editing it? Are there ways that people inside prison could be in control of the newsletter?
Dear Daniel,

I am reading your letter to the AMC in the McGregor Building on campus at Wayne State University in Detroit, Michigan on a Saturday morning on the last day of June. My name is Mary. I was born in a prison town, "Jacktown," in Jackson Michigan in 1954. I was raised in Flint, MI as a kid, and ended up with a felony murder case here where I served 26.7 years and 4 years of parole. I have been home ten years.

Your letter is critically important. The voices of prisoners on this blog are being read by hundreds of people... in your words and with your great heart and wisdom and spirit. Your collective genius is being reflected on, considered, instructed on, and respected. We need your thought and ideas like parched fields of gold need rain. We are taking your ideas and holding them especially close for consideration and action.

Thinking of you in the D,
Your friend in the struggle,
Mary
Hi Daniel,

Thank you for the great points you make in your letter. I am a participant in the Allied Media Conference and want you to know I am taking your ideas to heart.

Later today I will be meeting with the group I work with as an ally, All of Us or None, an organization working for the civil rights of formerly incarcerated people.

We will be discussing the launch of a national newsletter, and I will be bringing your ideas into the conversation.

I am a writer and an artist and will also be looking for opportunities to write and create art about the prison realities you talk about. Art is a powerful way to influence public opinion.

Stay strong,
Denise
Thanks for writing! I finished the transcription for your post.
Hi Daniel,

You are "right on" with your belief of how we can make changes in the prison system.

We need to help people to understand why these people are in prison first of all, then help them to realize that currently we are not doing anyone any good by housing them without the help and understanding they need to be a changed person when they are released.

Most of us (yes even the people that aren't incarcerated)need love, support and/or guidance in life. Many have grown up without that guidance, love and/or support. It's not easy for some to be "alone", in this world. Many might say: "well I did it", but I don't believe they are being 100% true to themselves, if they think they did it without the influence of others. In some way or another someone or something (could be a stranger that said or did something that influenced them in a way they don't even realize) may have helped them.

I hope that the people that have commented can help get the word out so something can be done to get the ball rolling for a better prison system.

I also have to agree that the media should be showing the public the success stories of people that where incarcerated, and are now an important part of society. We need lots more of that.....they are out there!!!

I also think that "talking with people that are incarcerated" regarding their childhood up to and including adulthood might help to better understand their needs. They all need to feel better about themselves so they can become a more positive & happy person.

As you already know, I believe in a positive attitude. It takes a lot of work to obtain it because there are more negative people in the world than positive, but it's not impossible. Once you start to live a more positive life, life automatically changes for the better....no matter where you are. You have to find a positive in every negative situation...it's there!!

Well, I didn't mean to go on and on about this, but I am very passionate about this subject! I hope that something can be done. I know that some states do provide education for in-mates. Maybe we need to know how they are doing it.

Let me know if I can be of any assistance in getting the word out there.

Take care! Hang in there, you are doing an awesome job!!! Stay positive....it's the only way. 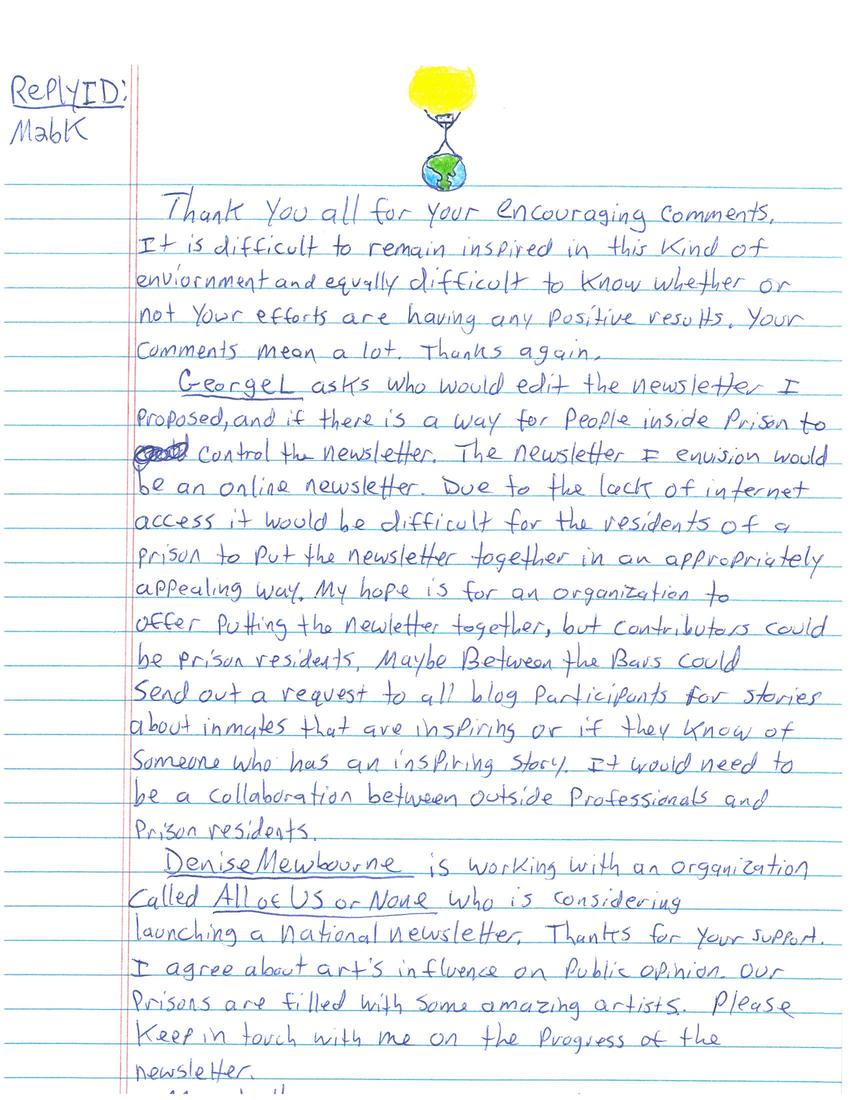 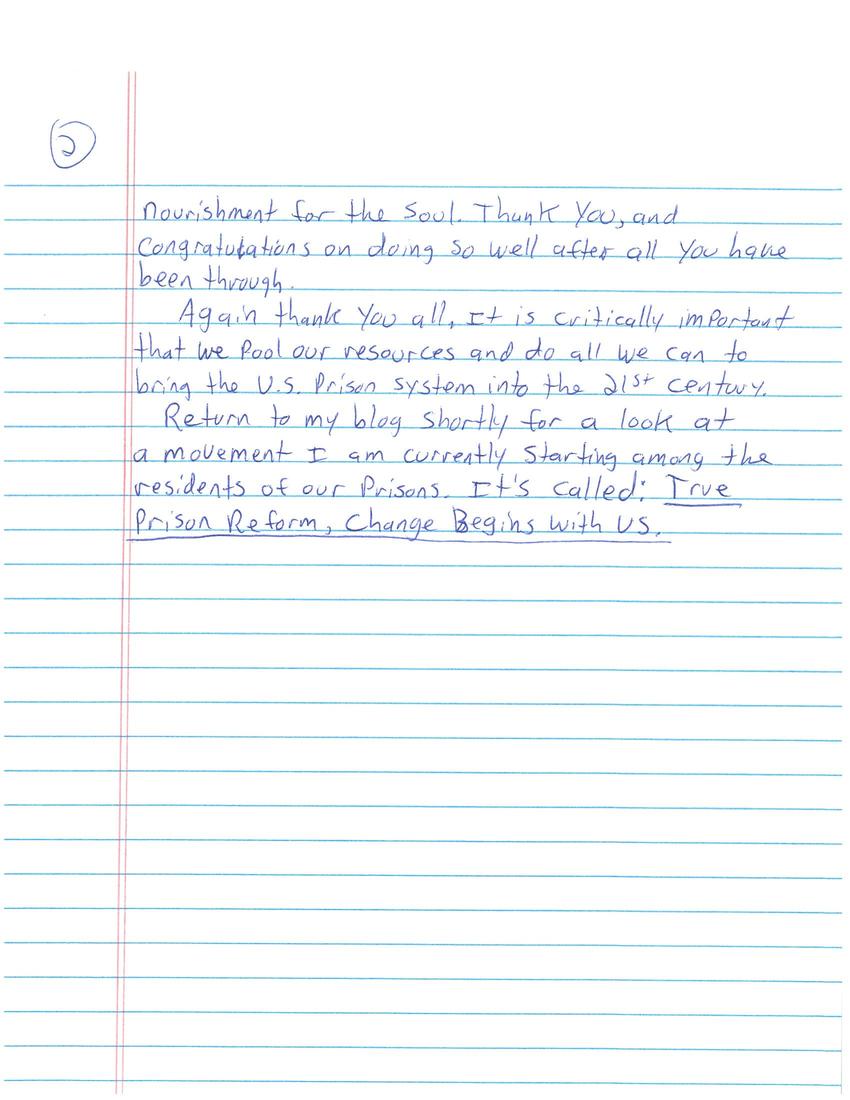