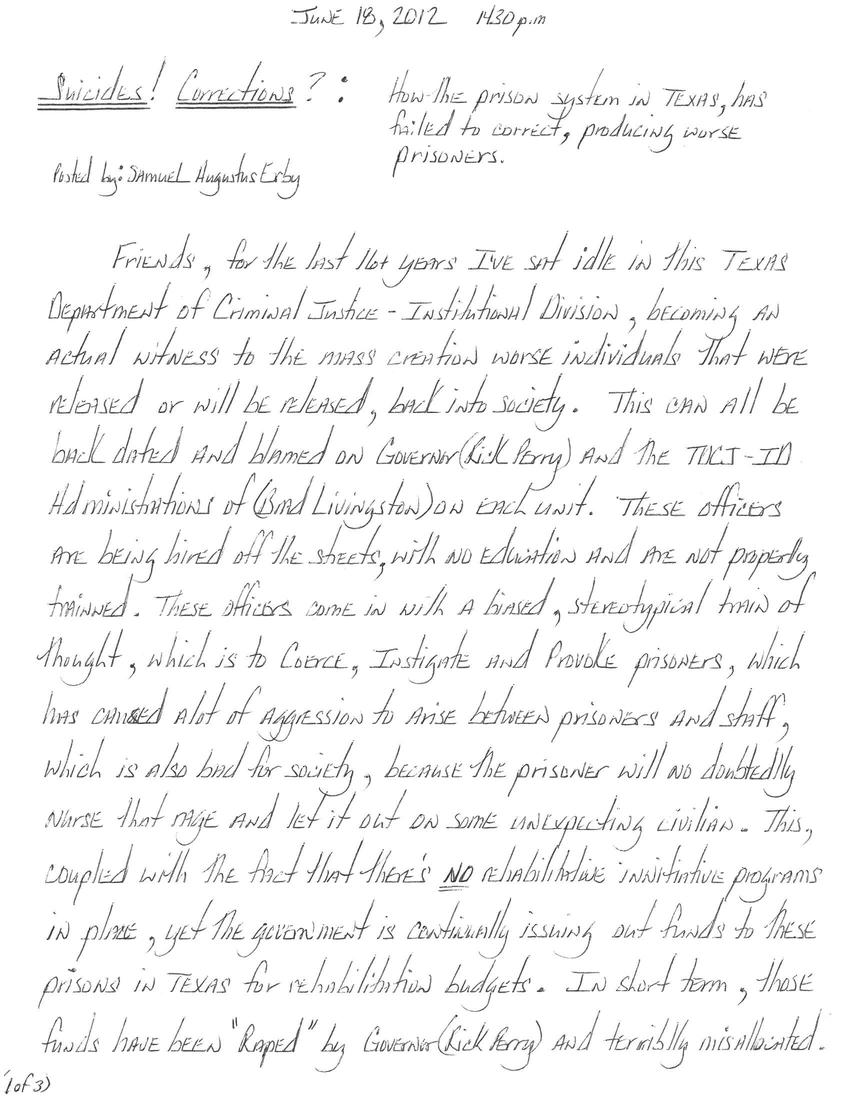 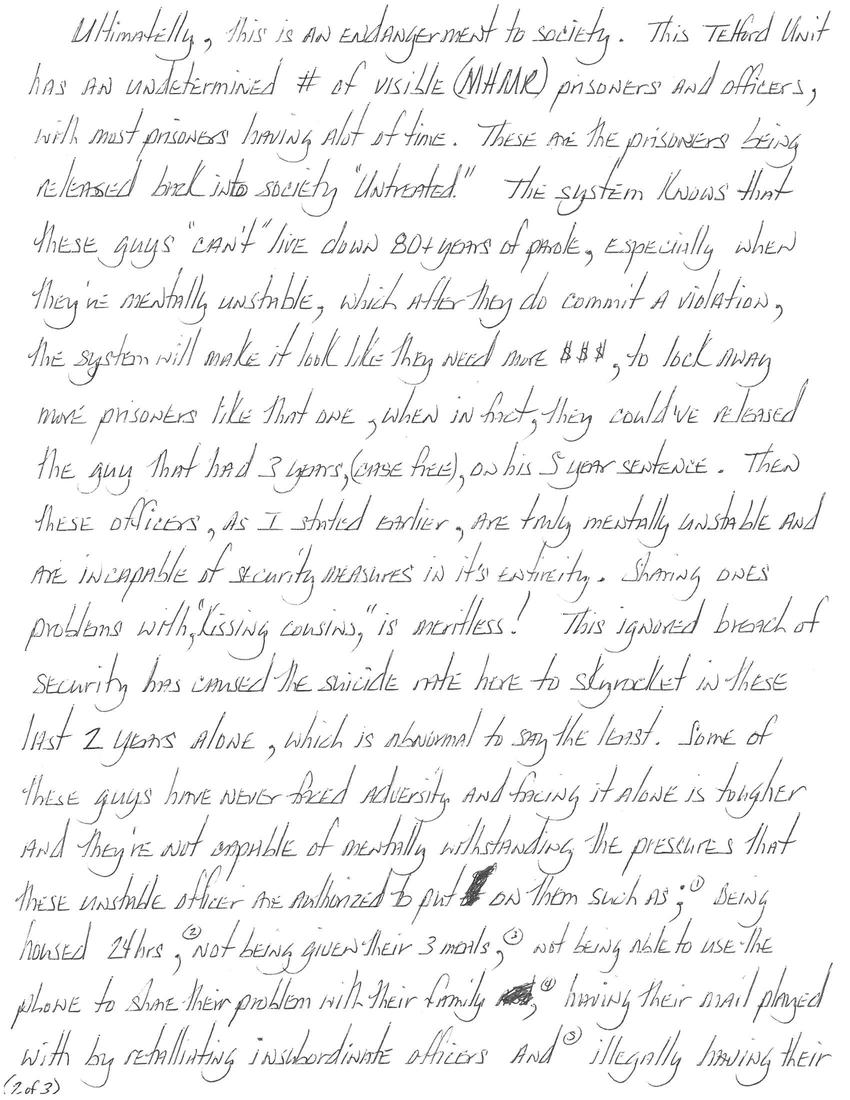 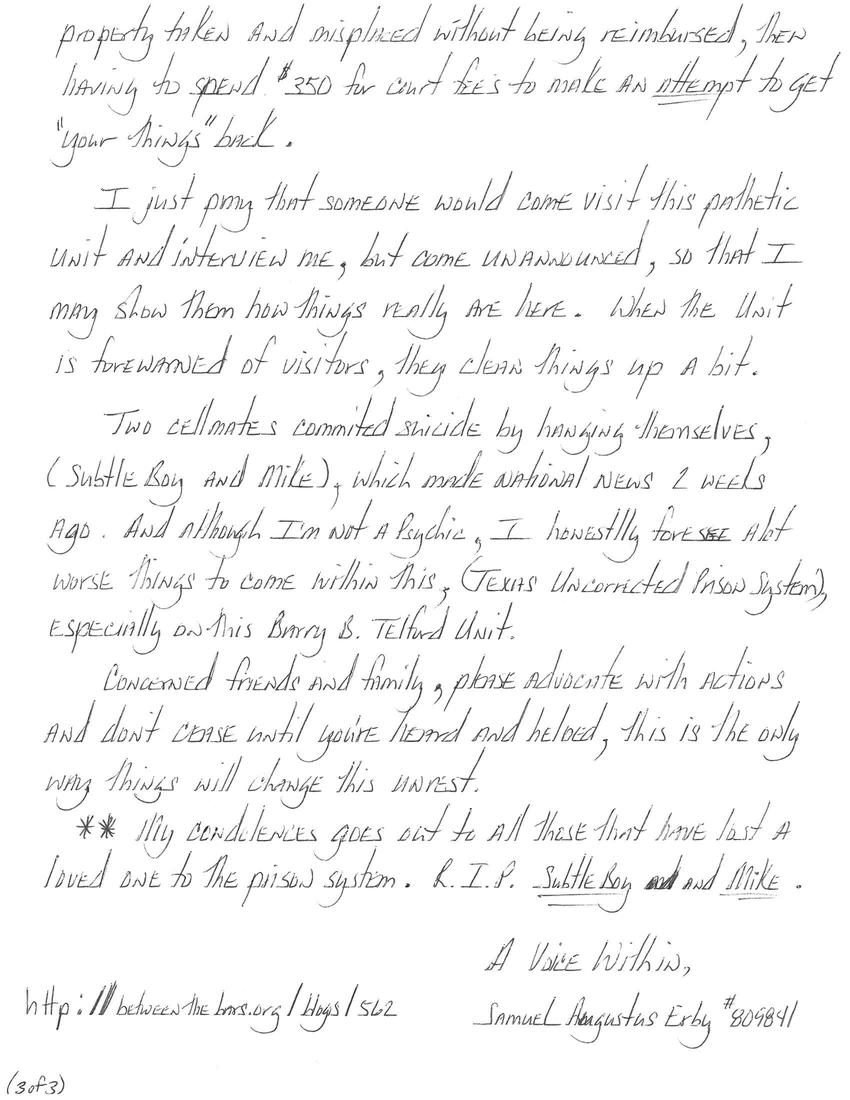 Suicides! Corrections?: How the prison system in Texas, has failed to correct, producing worse prisoners

Friends, for the last 16+ years I've sat idle in this Texas Department of Criminal Justice - Institutional Division, becoming an actual witness to the mass creation of worse individuals that were released or will be released back into society. This can all be backdated and blamed on Governor (Rick Perry) and the [?] administrations of (Brad Livingston) on each unit. These officers are being hired off the streets, with no education and are not properly trained. These officers come in with a biased, stereotypical train of thought, which is to coerce, instigate and provoke prisoners, which has caused a lot of aggression to arise between prisoners and staff, which is also bad for society, because the prisoner will no doubt nurse that rage and let it out on some unexpecting civilian. This, coupled with the fact that there's no rehabilitative initiative programs in place, yet the government is continually issuing out funds to these prisons in Texas for rehabilitation budgets. In short term, those funds have been "raped" by Governor (Rick Perry) and terribly misallocated.

Ultimately, this is an endangerment to society. This Telford Unit has an undetermined # of visible (MHMR) prisoners and officers, with most prisoners having a lot of time. These are the prisoners being released back into society "untreated." The system knows that these guys "can't" live down 80+ years of parole, especially when they're mentally unstable, which after they do commit a violation, the system will make it look like they need more $$$, to lock away more prisoners like that one, when in fact they could've released the guy that had 3 years, (Case free), on his 5 year sentence. Then these officers, as I started earlier, are truly mentally unstable and are incapable of security measures in its entirely. Sharing one's problems with "kissing cousins" is meritless! This ignored breach of security has caused the suicide rate here to skyrocket in the last 2 years alone, which is abnormal to say the least. Some of these guys have never faced adversity and facing it alone is tougher and they're not capable of mentally withstanding the pressures that these unstable officers are authorized to put on them such as; (1) Being housed 24 hrs, (2) not being given their 3 [?], (3) not being able to use the phone to share their problems with their family, (4) having their mail played with by retaliating insubordinate officers and, (5) illegally having their property taken and misplaced without being reimbursed, then having to spend $350 for court fees to make an attempt to get "your things" back.

I just pray that someone would come visit this pathetic unit and interview me, but come unannounced, so that I may show them how things really are here. When the unit is forewarned of visitors, they clean things up a bit.

Two cellmates committed suicide by hanging themselves, (Subtle Boy and Mike), which made national news 2 weeks ago. And although I'm not a psychic, I honestly foresee a lot worse things to come within this, (Texas Uncorrected Prison System), especially on this Barry B. Telford unit.

Concerned friends and family, please advocate with actions and don't cease until you're heard and helped, this is the only way things will change this unrest.

** My condolences go out to all those that have lost a loved one to the prison system. R.I.P. Subtle Boy and Mike.