Wisconsin has the Highest Incarceration Rate Not Only in America, But the World 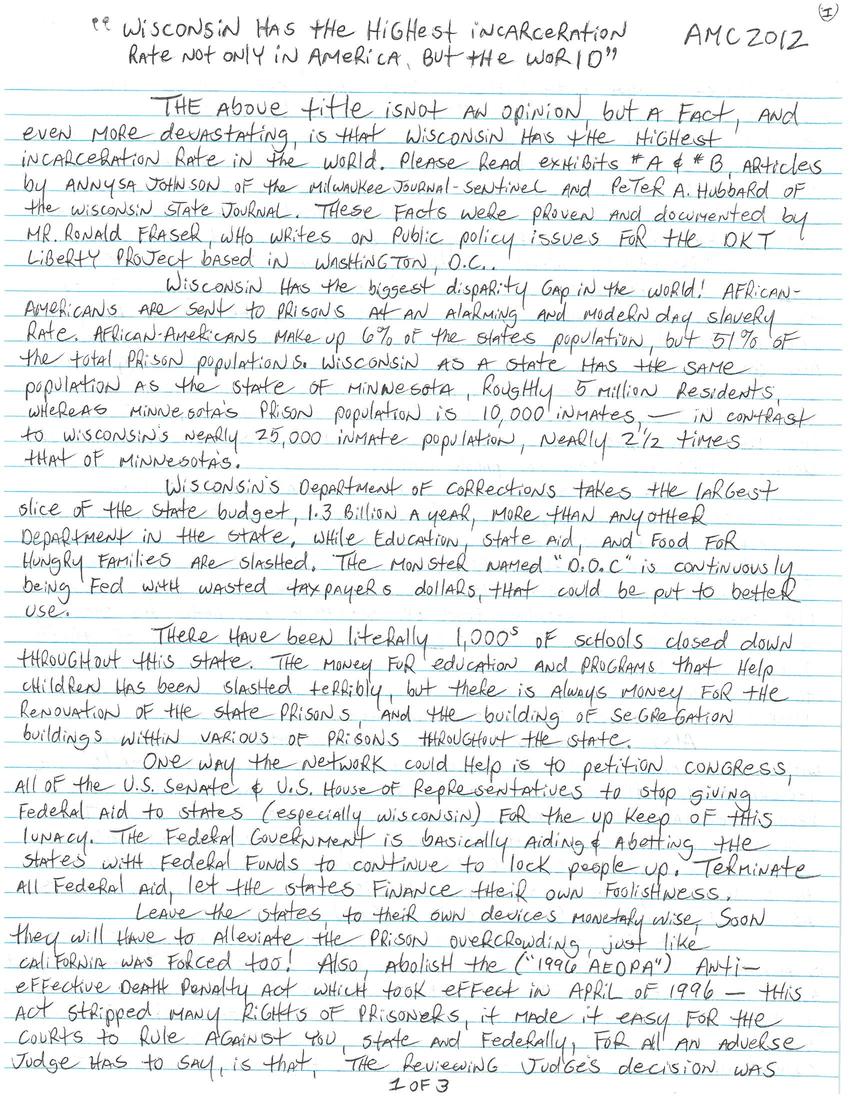 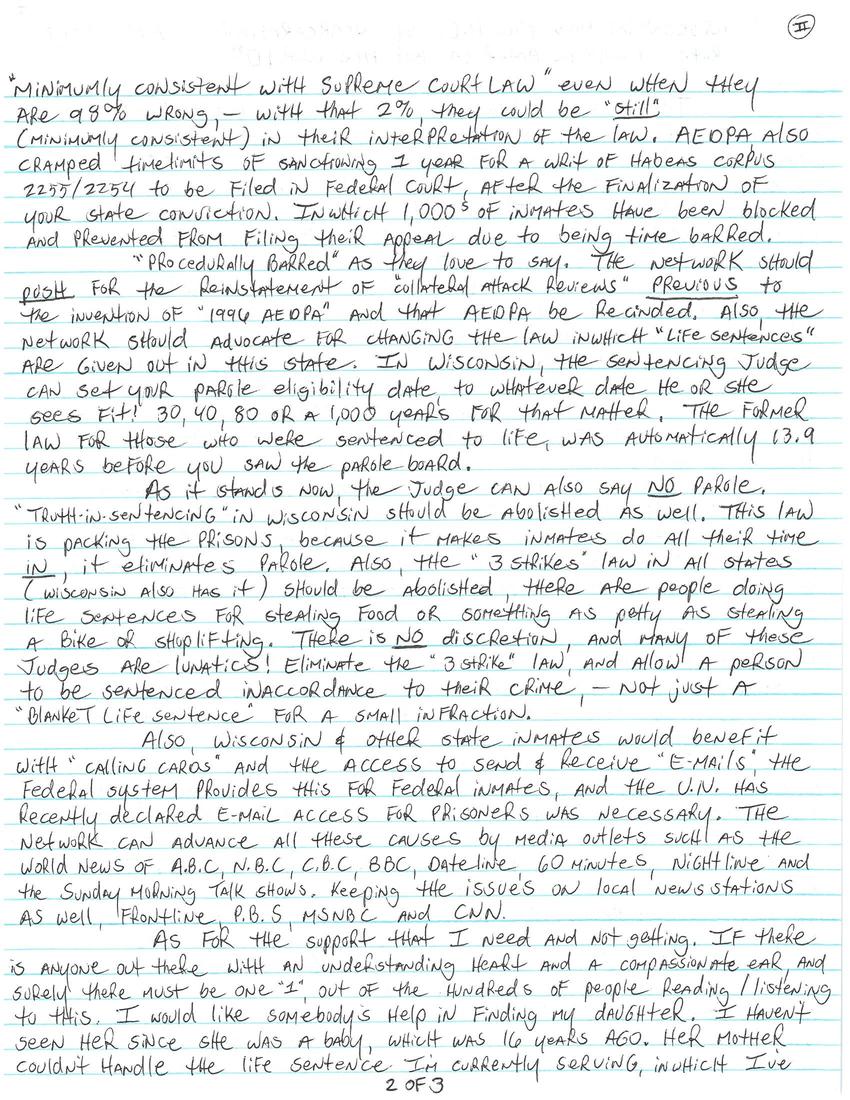 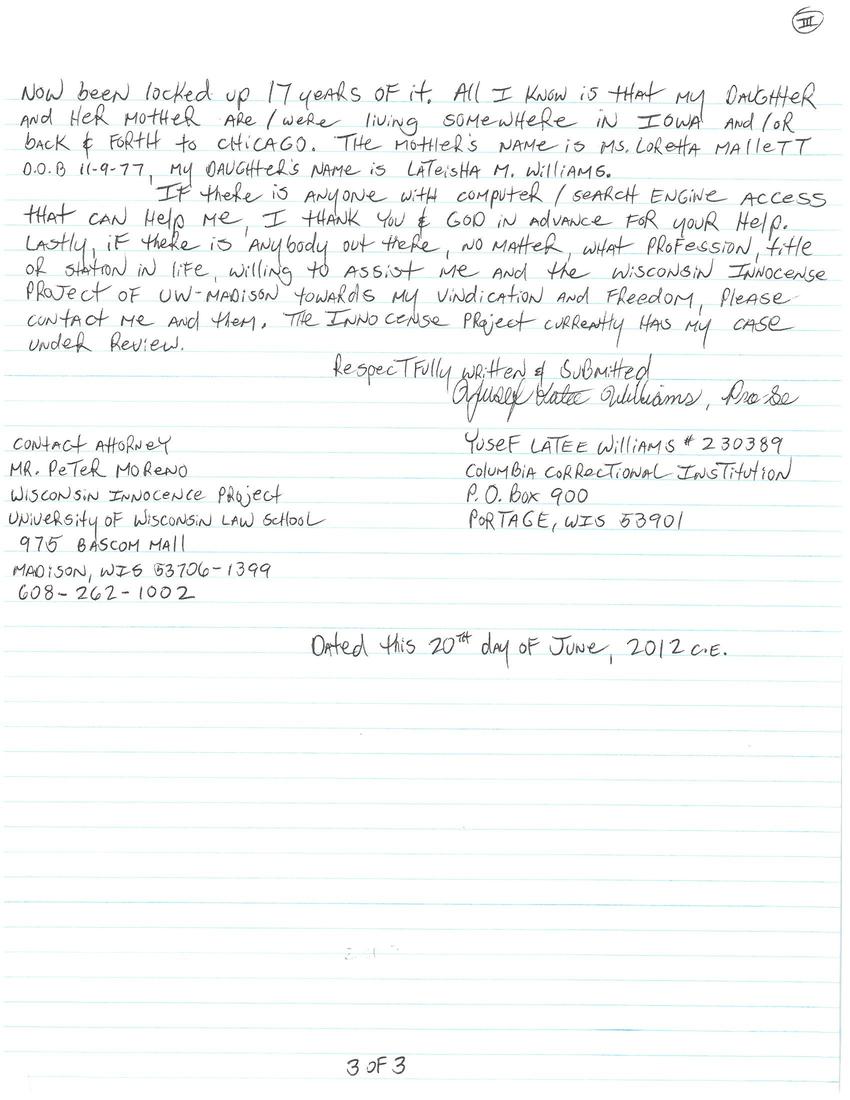 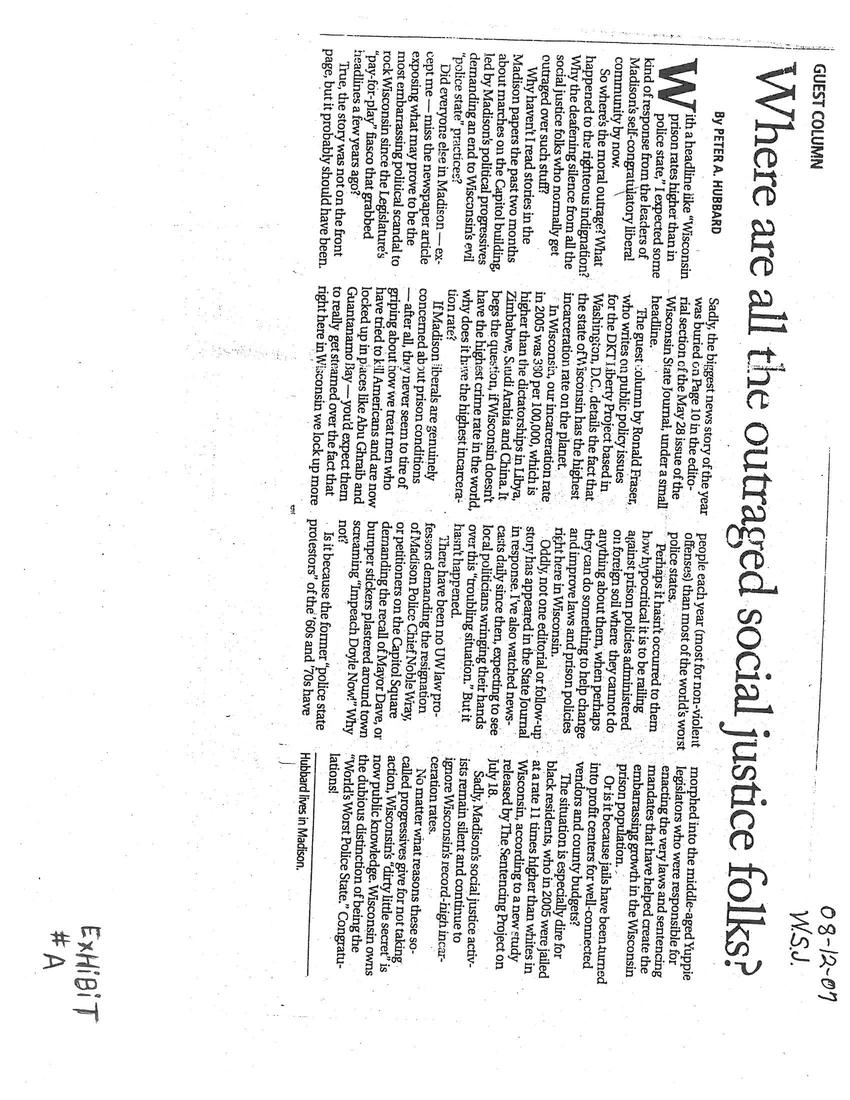 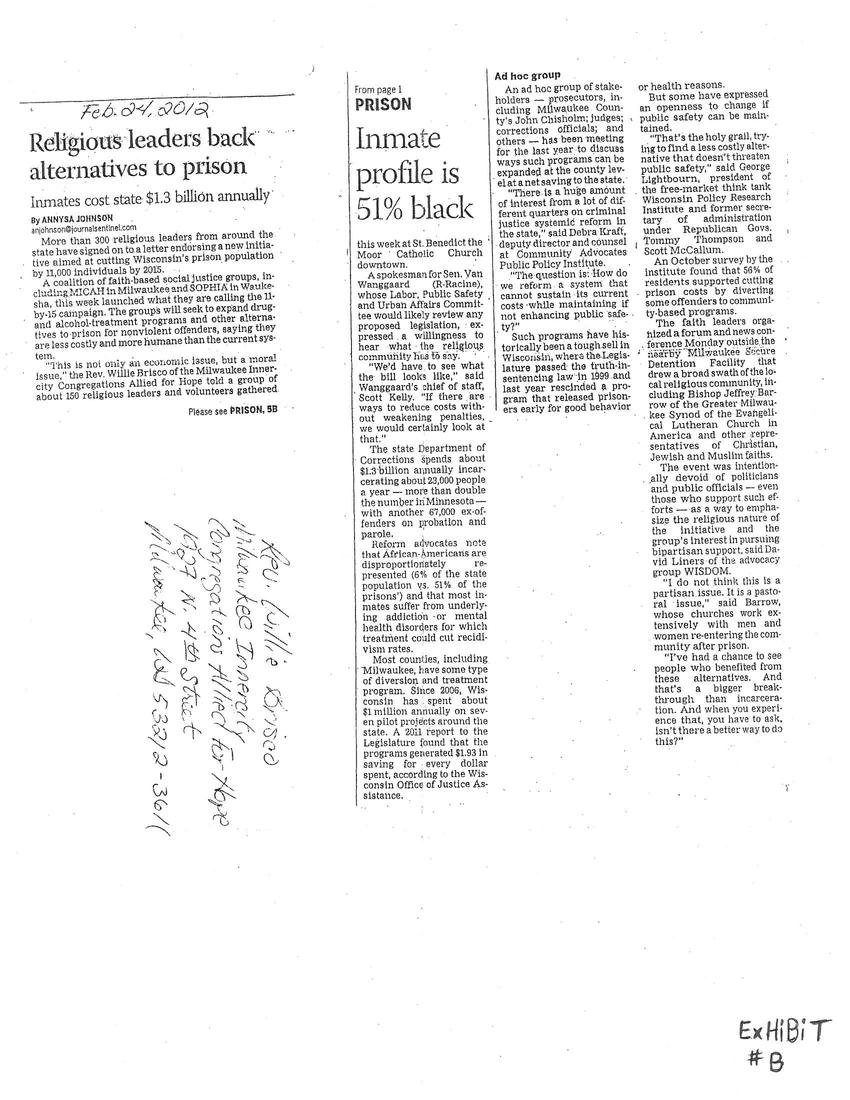 "Wisconsin Has the Highest incarceration Rate Not Only in America, But the World"
AMC 2012

The above title is not an opinion, but a fact, and
even more devastating, is that Wisconsin has the highest
incarceration rate in the world. Please read exhibits #A & #B articles
by Annysa Johnson of the Milwaukee Journal-Sentinel and Peter A. Hubbard of
the Wisconsin State Journal. These facts were proven and documented by
Mr. Ronald Fraser, who writes on public policy issues for the DKT
Liberty Project based in Washington, D.C.

Wisconsin has the biggest disparity gap in the world! Aftican-
Americans are sent to prisons at an alarming and modern day slavery
rate. African-Americans make up 6% of the states population, but 51% of
the total prison populations. Wisconsin as a state has the same
population as the state of Minnesota, roughly 5 million residents,
whereas Minnesota's prison population is 10,000 inmates, - in contrast
to Wisconsin's nearly 25,000 inmate population, nearly 2 1/2 times
that of Minnesota's.

Wisconsin's Department of Corrections takes the largest
slice of the state budget, 1.3 billion a year, more than any other
Department in the state, while education, state aid, and food for
hungry families are slashed. The monster named "D.O.C." is continously
being fed with wasted taxpayers dollars, that could be put to better
use.

There have been literally 1,000s of schools closed down
throughout this state. The money for education and programs that help
children has been slashed terribly, but there is always money for the
renovation of the state prisons, and the building of segregation
buildings within various of prisons throughout the state.

One way the network could help is to petition congress,
all of the U.S. Senate & U.S. House of Representatives to stop giving
federal aid to states (especially Wisconsin) for the up keep of this
lunacy. The federal government is basically aiding & abetting the
states with federal funds to continue to lock people up. Terminate
all federal aid, let the states finance their own foolishness.

Leave the states to their own devices monetarily wise. Soon
they will have to alleviate the prison overcrowding, just like
California was forced too! Also, abolish the ("1996 AEDPA") anti-
effective death penalty act which took effect in April of 1996 - this
act stripped many rights of prisoners, it made it easy for the
courts to rule against you, state and federally, for all an adverse
judge has to say, is that, the reviewing judge's decision was
"minimumly consistent with supreme court law" even when they
are 98% wrong, - with that 2%, they could be "STILL"
(minimumly consistent) in their interpretation of the law. AEDPA also
cramped time limits of sanctioning 1 year for a writ of Habeas Corpus
2255/2254 to be filed in federal court, after the finalization of
your state conviction. In which 1,000s of inmates have been blocked
and prevented from filing their appeal due to being time barred.

"Procedurally barred" as they love to say. The network should
PUSH for the reinstatement of "collateral attack reviews" PREVIOUS to
the invention of "1996 AEDPA" and that AEDPA be recinded. Also, the
network should advocate for changing the law in which "life sentences"
are given out in this state. In Wisconsin, the sentencing judge
can set your parole eligibility date, to whatever date he or she
sees fit! 30, 40, 80 or 1000 years for that matter. The former
law for those who were sentenced to life, was automatically 13.9
years before you saw the parole board.

As it stands now, the judge can also say NO parole.
"Truth-in-Sentencing" in Wisconsin should be abolished as well. This law
is packing the prisons, because it makes inmates do all their time
IN, it eliminates parole. Also, the "3 strikes" law in all states
(Wisconsin also has it) should be abolished, there are people doing
life sentences for stealing food or something as petty as stealing
a bike or shoplifting. There is NO discretion, and many of these
judges are lunatics! Eliminate the "3 strike" law, and all ow a person
to be sentenced in accordance to their crime, - not just a
"blanket life sentence" for a small infraction.

Also, Wisconsin & other state inmates would benefit
with "calling cards" and the access to send & receive "e-mails," the
federal system provides this for federal inmates, and the U.N. has
recently declared e-mail access for prisoners was necessary. The
network can advance all these causes by media outlets such as the
world news of ABC, NBC, CBS, BBC, Dateline, 60 minutes, Nightline and
the Sunday morning talk shows, keeping the issues on local news stations
as well, Frontline, PBS, MSNBC and CNN.

As for the support that I need and not getting. If there
is anyone out there with an understanding heart and a compassionate ear, and
surely there must be one "1" out of the hundreds of people reading/listening
to this, I would like somebody's help in finding my daughter. I haven't
seen her since she was a baby, which was 16 years ago. Her mother
couldn't handle the life sentence I'm currently serving, in which I've
now been locked up 17 years of it. All I know is that my daughter
and her mother are/were living somewhere in Iowa and/or
back & forth to Chicago. The mother's name is Ms. Loretta Mallett
DOB 11-9-77, my daughter's name is Lateisha M. Williams.

If there is anyone with computer/search engine access
that can help me, I thank you & GOD in advance for your help.
Lastly, if there is anybody out there, no matter what profession, title
or situation in life, willing to assist me and the Wisconsin Innocense
Project of UW-Madison towards my vindication and freedom, please
contact me and them. The Innocense Project currently has my case
under review.