My Attempt At Truce 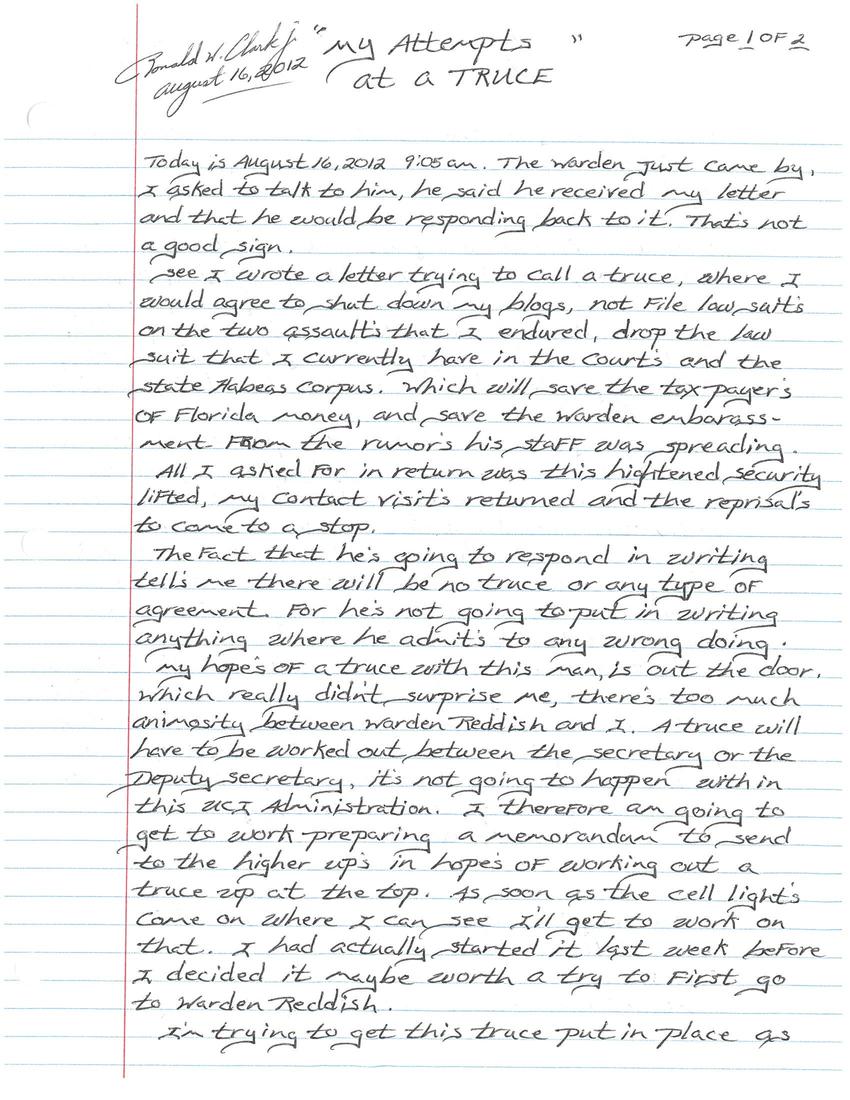 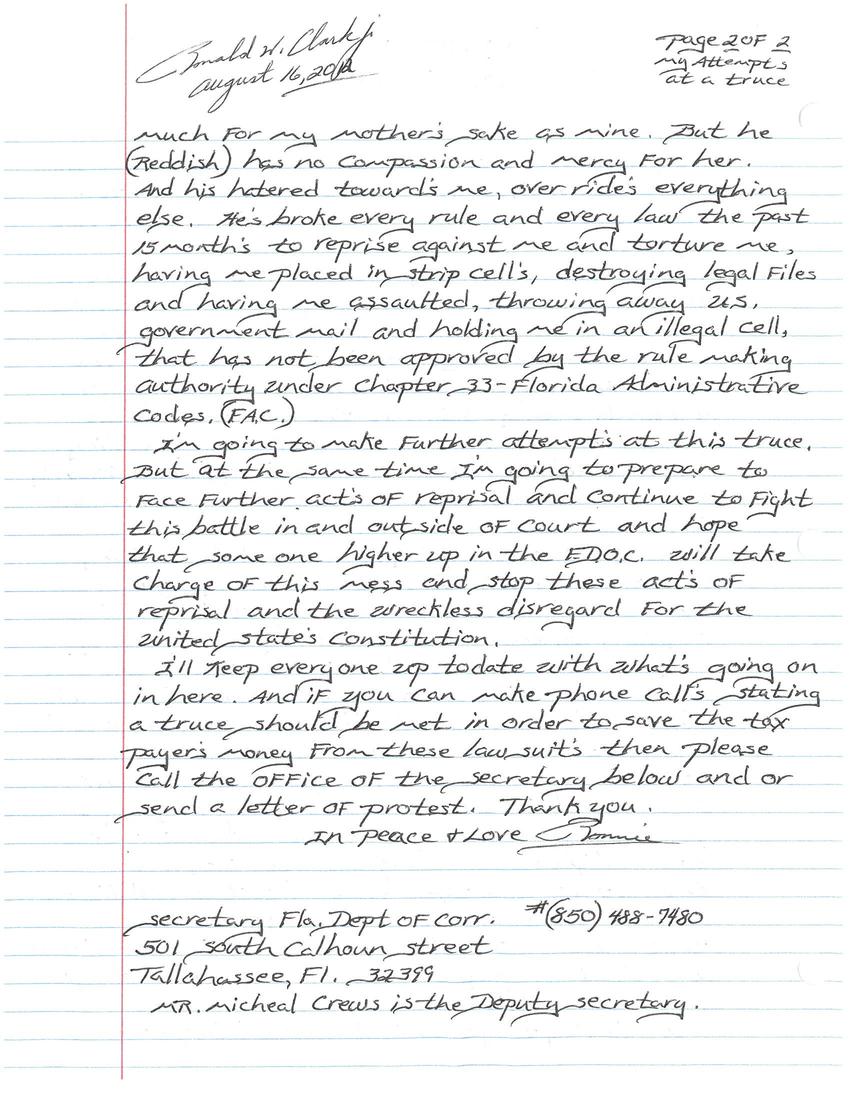 "MY ATTEMPTS AT A TRUCE"

Today is August 16, 2012 9:05am. The warden just came by, I asked to talk to him, he said he received my letter and that he would be responding back to it. That's not a good sign.

See I wrote a letter trying to call a truce, where I would agree to shut down my blogs, not file law suits on the two assaults that I endured, drop the law suit that I currently have in the courts and the state Habeas Corpus. Which will serve the tax-payers or Florida money, and save the Warden embarrassment from the rumors his staff was spreading.

All I asked for in return was this hightened security lifted. My contact visits returned and the reprisals to come to a stop.

The fact that he's going to respond in writing tells me there will be no truce or any type of agreement. For he's not going to put in writing anything where he admits to any wrong doing.

My hopes of a truce with this man is out the door, which really didn't surprise me, there's too much animosity between Warden Reddish and I. A truce will have to be worked out between the secretary or the Deputy Secretary, it's not going to happen with in this UCI Administration. I therefore am going to get to work preparing a memorandum to send to the higher ups in hopes of working out a truce up at the top. As soon as the cell lights came on where I can see I'll get to work on that. I had actually started it last week before I decided it maybe worth a try to first go to Warden Reddish.

I'm trying to get this truce put in place as much for my Mother's sake as mine. But he (Reddish) has no compassion and mercy for her. And his hatred towards me, overrides everything else. He's broke every rule and every law the past 15 months to reprise against me and torture me, having me placed in strip cells, destroying legal files and having me assaulted, throwing away US governemnt mail and holding me in an illegal cell, that has not been approved by the rule making authority under chapter 33 - Florida Administrative Codes, (FAC).

I'm going to make further attempts at this truce, but at the same time I'm going to prepare to face further acts of reprisal and continue to fight this battle in and outside of court and hope that someone higher up the FDOC will take charge of this mess and stop these acts of reprisal and the wreckless disregard for the United State's constitution.

I'll keep everyone up to date with what's going on in here. And if you can make phone calls stating a truce should be met in order to save the tax payer's money from these law suits then please call the office of the secretary below and or send a letter or protest. Thank you

In peace and love

Thanks for writing! I finished the transcription for your post.
Hi Ronnie, I hope all is well with you and wanted to let you know I have been reading your blog(s)....before this one (and your new one) I read the old one you had at blogspot I believe? Before recently moving to wordpress? If Im wrong, my apologies but I have been a reader for awhile. I just want to wish you well with whatever ends up happening through this ordeal, by now hopefully you have gotten some sort of an answer. Thats why I wanted to send my best of wishes your direction. I would miss reading your thoughts on your blog, etc but if you had to stop writing totally no matter what its focused on, then I know its in your best interest due to the conditions and especially your Mother. I support you no matter what happens and hope that things will get much better soon. I may contact you through snail mail, I have thought about it before but was afraid it would not reach you because of the mail issues. Has that now changed and gotten better? Hopefully. Please take care. -CC
As I was reading I noticed some minor errors which I fixed.