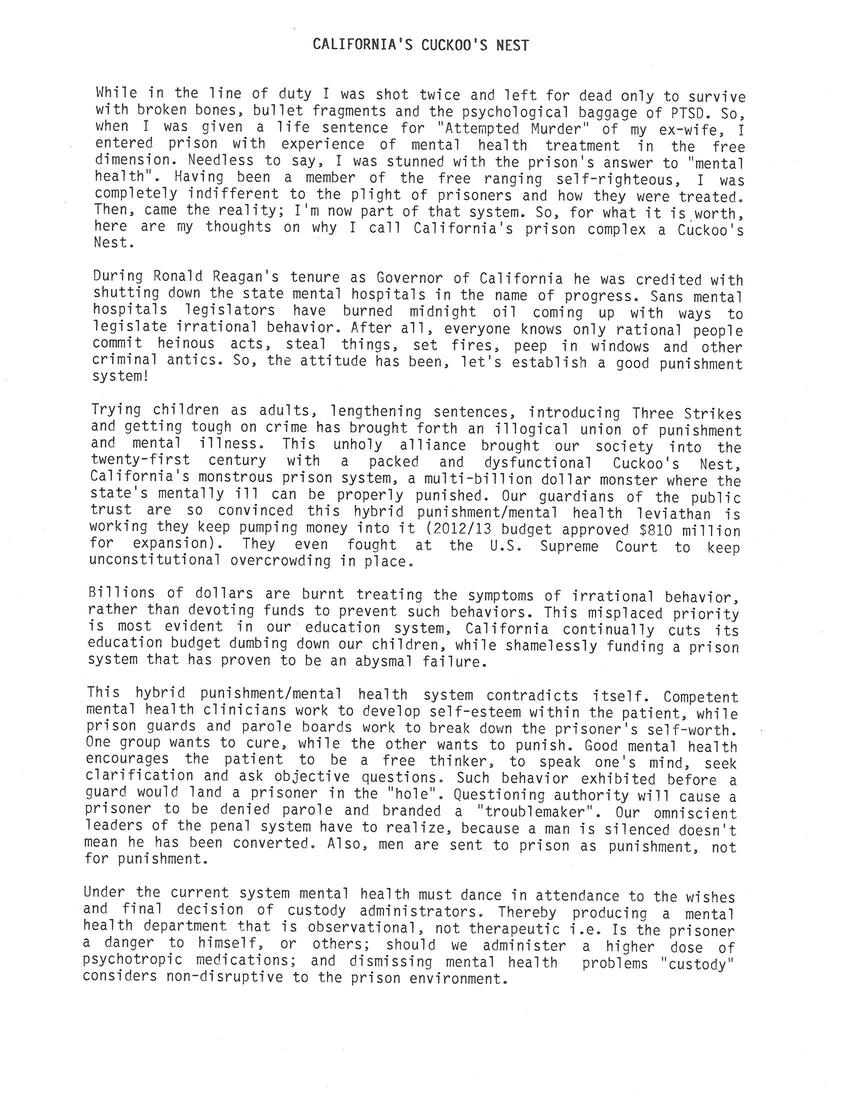 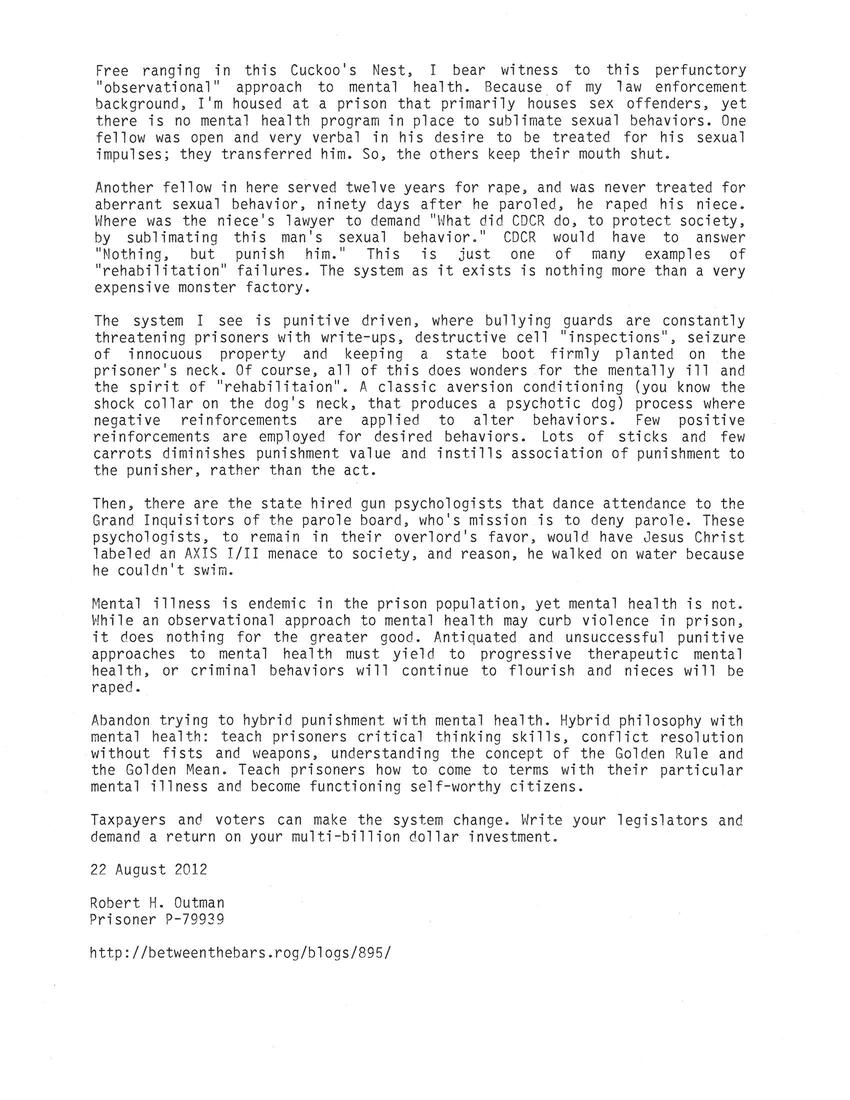 While in the line of duty I was shot twice and left for dead only to survive with broken bones, bullet fragments and the psychological baggage of PTSD. So, when I was given a life sentence for "Attempted Murder" of my ex-wife, I entered prison with experience of mental health treatment in the free dimension. Needless to say, I was stunned with the prison's answer to "mental health". Having been a member of the free ranging self-righteous, I was completely indifferent to the plight of prisoners and how they were treated. Then, came the reality; I'm now part of that system. So, for what it is worth, here are my thoughts on why I call California's prison complex a Cuckoo's Nest.

During Ronald Reagan's tenure as Governor of California he was credited with shutting down the state mental hospitals in the name of progress. Sans mental hospitals legislators have burned midnight oil coming up with ways to legislate irrational behavior. After all, everyone knows only rational people commit heinous acts, steal things, set fires, peep in windows and other criminal antics. So, the attitude has been, let's establish a good punishment system!

Trying children as adults, lengthening sentences, introducing Three Strikes and getting tough on crime has brought forth an illogical union of punishment and mental illness. This unholy alliance brought our society into the twenty-first century with a packed and dysfunctional Cuckoo's Nest, California's monstrous prison system, a multi-billion dollar monster where the state's mentally ill can be properly punished. Our guardians of the public trust are so convinced this hybrid punishment/mental health leviathan is working they keep pumping money into it (2012/13 budget approved $810 million for expansion). They even fought at the U.S. Supreme Court to keep unconstitutional overcrowding in place.

Billions of dollars are burnt treating the symptoms of irrational behavior, rather than devoting funds to prevent such behaviors. This misplaced priority is most evident in our education system, California continually cuts its education budget dumbing down our children, while shamelessly funding a prison system that has proven to be an abysmal failure.

This hybrid punishment/mental health system contradicts itself. Competent mental health clinicians work to develop self-esteem within the patient, while prison guards and parole boards work to break down the prisoner's self-worth. One group wants to cure, while the other wants to punish. Good mental health encourages the patient to be a free thinker, to speak one's mind, seek clarification and ask objective questions. Such behavior exhibited before a guard would land a prisoner in the "hole". Questioning authority will cause a prisoner to be denied parole and branded a "troublemaker". Our omniscient leaders of the penal system have to realize, because a man is silenced doesn't mean he has been converted. Also, men are sent to prison as punishment, not for punishment.

Under the current system mental health must dance in attendance to the wishes and final decision of custody administrators. Thereby producing a mental health department that is observational, not therapeutic i.e. Is the prisoner a danger to himself, or others; should we administer a higher dose of psychotropic medications; and dismissing mental health problems "custody" considers non-disruptive to prison environment.

Free ranging in the Cuckoo's Nest, I bear witness to this perfunctory "observational" approach to mental health. Because of my law enforcement background, I'm housed at a prison that primarily houses sex offenders, yet there is no mental health program in place to sublimate sexual behaviors. One fellow was open and very verbal in his desire to be treated for his sexual impulses; they transferred him. So, the others keep their mouth shut.

Another fellow in here served twelve years for rape, and was never treated for aberrant sexual behavior, ninety days after he paroled, he raped his niece. Where was the niece's lawyer to demand "What did CDCR do, to protect society, by sublimating this man's sexual behavior." CDCR would have to answer "Nothing, but punish him." This is just one of many examples of "rehabilitation" failures. The system as it exists is nothing more than a very expensive monster factory.

The system I see is punitive driven, where bullying guards are constantly threatening prisoners with write-ups, destructive cell "inspections", seizure of innocuous property and keeping a state boot firmly planted on the prisoner's neck. Of course, all of this does wonders for the mentally ill and the spirit of "rehabilitation". A classic aversion conditioning (you know the shock collar on the dog's neck, that produces a psychotic dog) process where negative reinforcements are applied to alter behaviors. Few positive reinforcements are employed for desired behaviors. Lots of sticks and few carrots diminishes punishment value and instills association of punishment to the punisher, rather than the act.

Then, there are the state hired gun psychologists that dance attendance to the Grand Inquisitors of the parole board, who's mission is to deny parole. These psychologists, to remain in their overlord's favor, would have Jesus Christ labeled an AXIS I/II menace to society, and reason, he walked on water because he couldn't swim.

Mental illness is endemic in the prison population, yet mental health is not. While an observational approach to mental health may curb violence in prison, it does nothing for the greater good. Antiquated and unsuccessful punitive approaches to mental health must yield to progressive therapeutic mental health, or criminal behaviors will continue to flourish and nieces will be raped.

Taxpayers and voters can make the system change. Write your legislators and demand a return on your multi-billion dollar investment.

Transcription is complete. Thanks for writing. Your thoughts are much appreciated.

Take care.
What I can do Robert is print this out make copies and send this article to a few legislators and whom ever else you deem would it would deem appropriate. How that? We have new congressmen/women are they ones? How about the Governor?
So either write to me, give Nathan the instructions In case Nathan gets transferred soon my address is 1712 Carver Rd # 230 Modesto Ca 95350.
Ok my heart is with you. God bless dear and yes those who served for our country are publicly highly revered and special attention are given to them while in uniform. So I'd like to personally thank you for serving our country.
You know there is a trend developing that "are" paying more attention to the observation like 30% of our homeless served..ect. and public opinion especially the holiday season are sympathetic to that and realizing they do have special needs in the mental dept soo..Until then Robert
Love Karen Woodyard
This would be a good article to send to our newspaper writers. Worth a try. They would need to edit it or read it and write their own article. They would need your permission to do that. Do I have it?
Karen
Mr. Outman,

Best wishes for the holidays and new year.