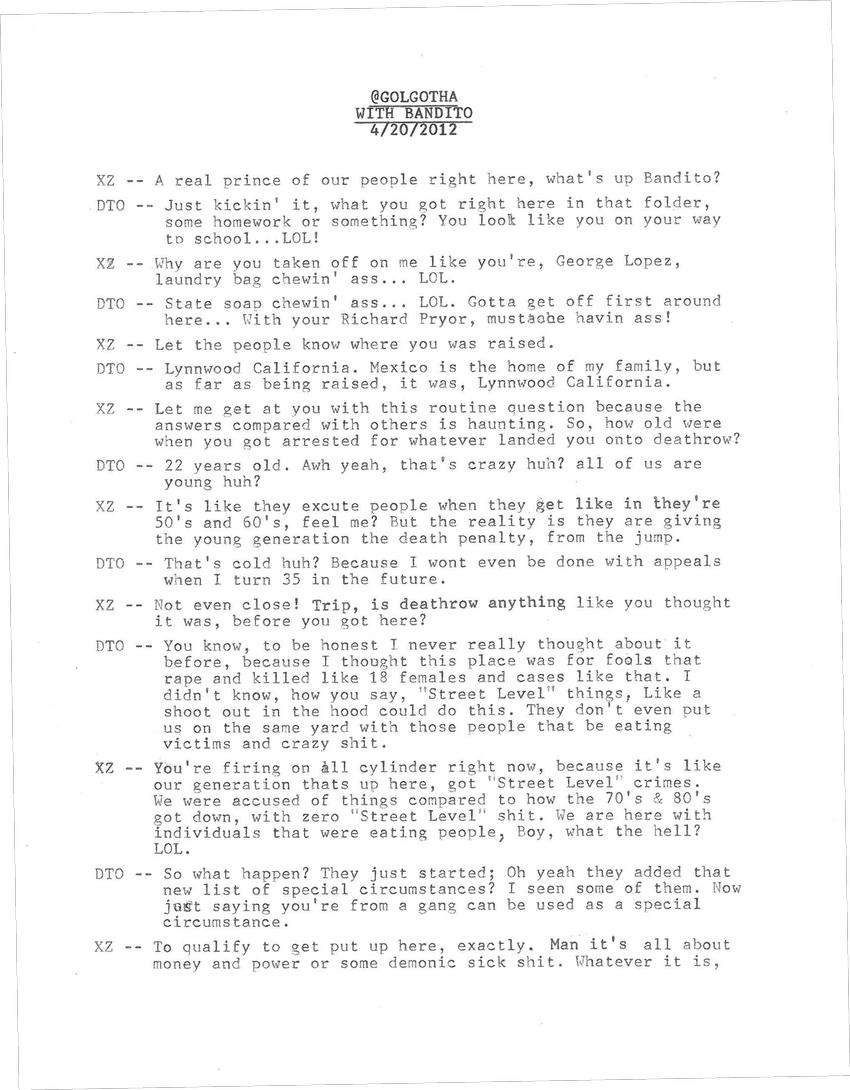 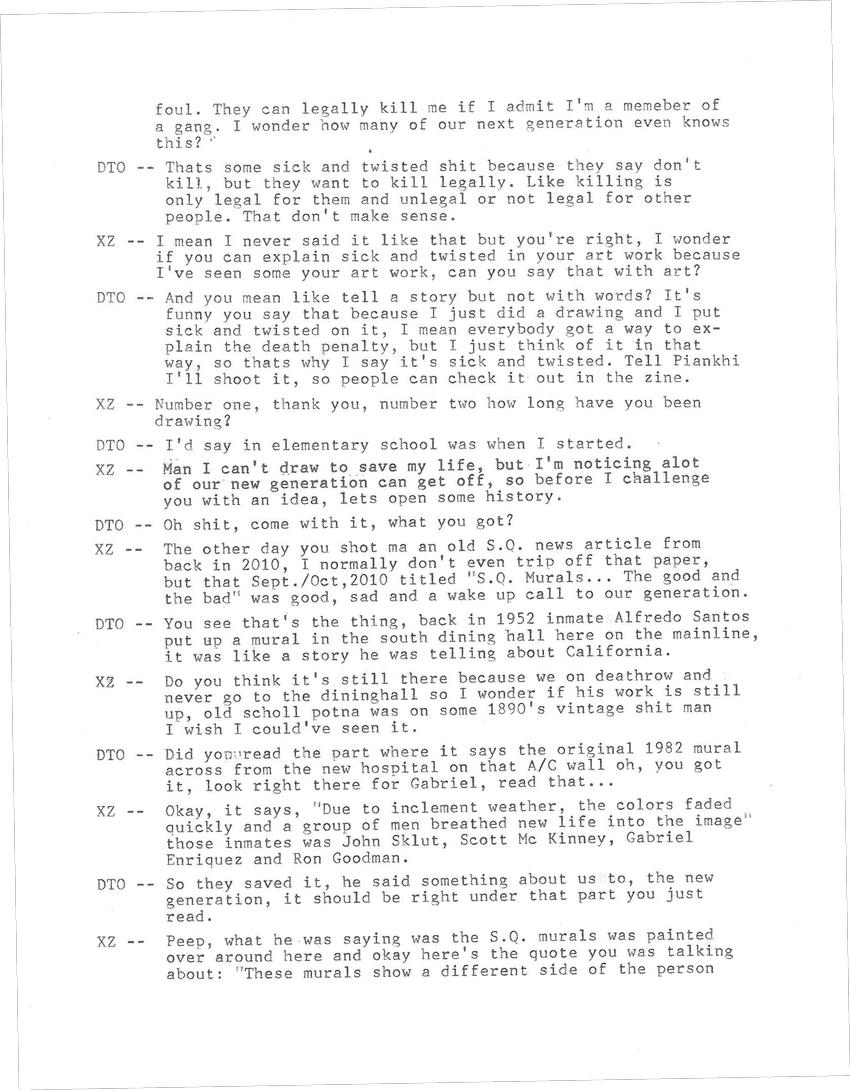 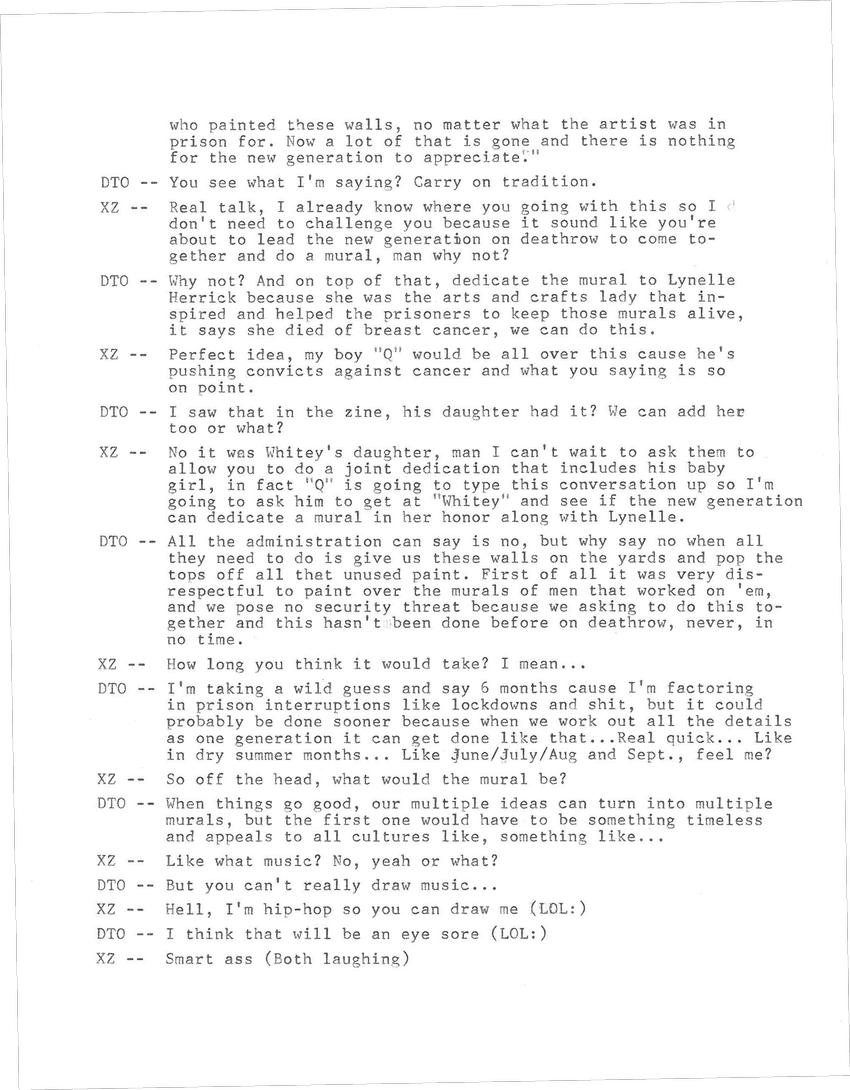 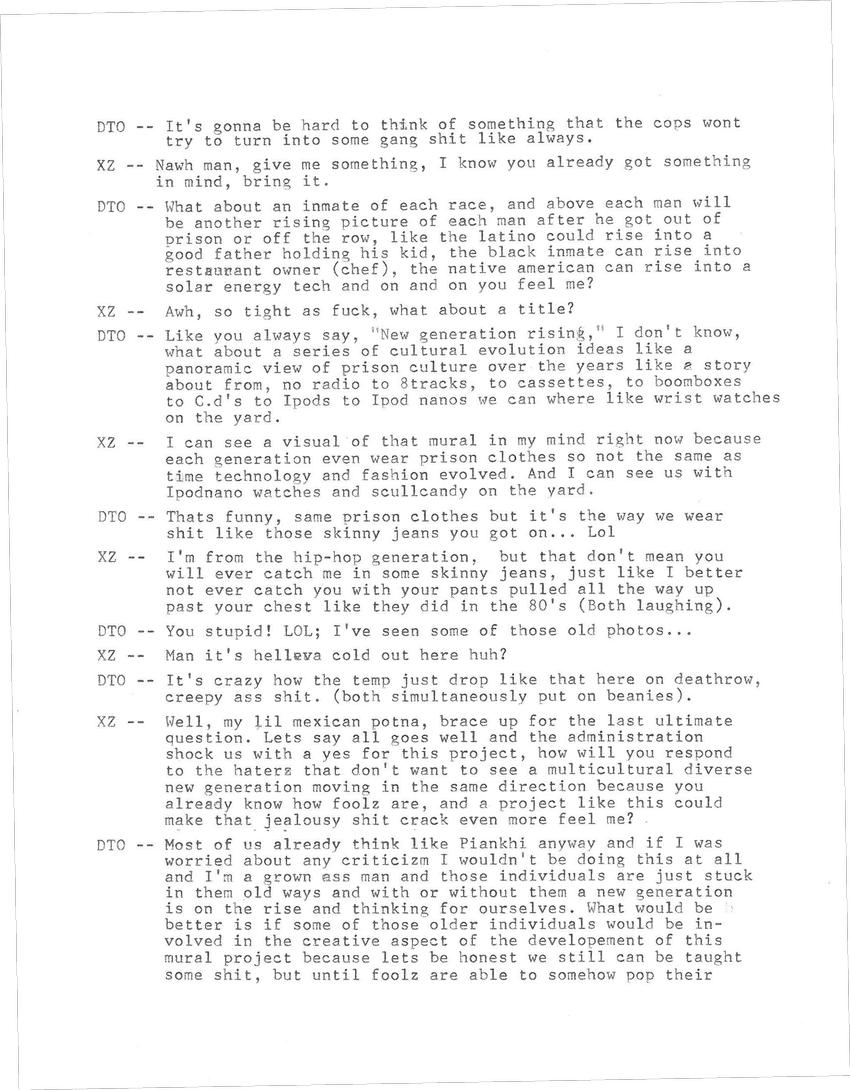 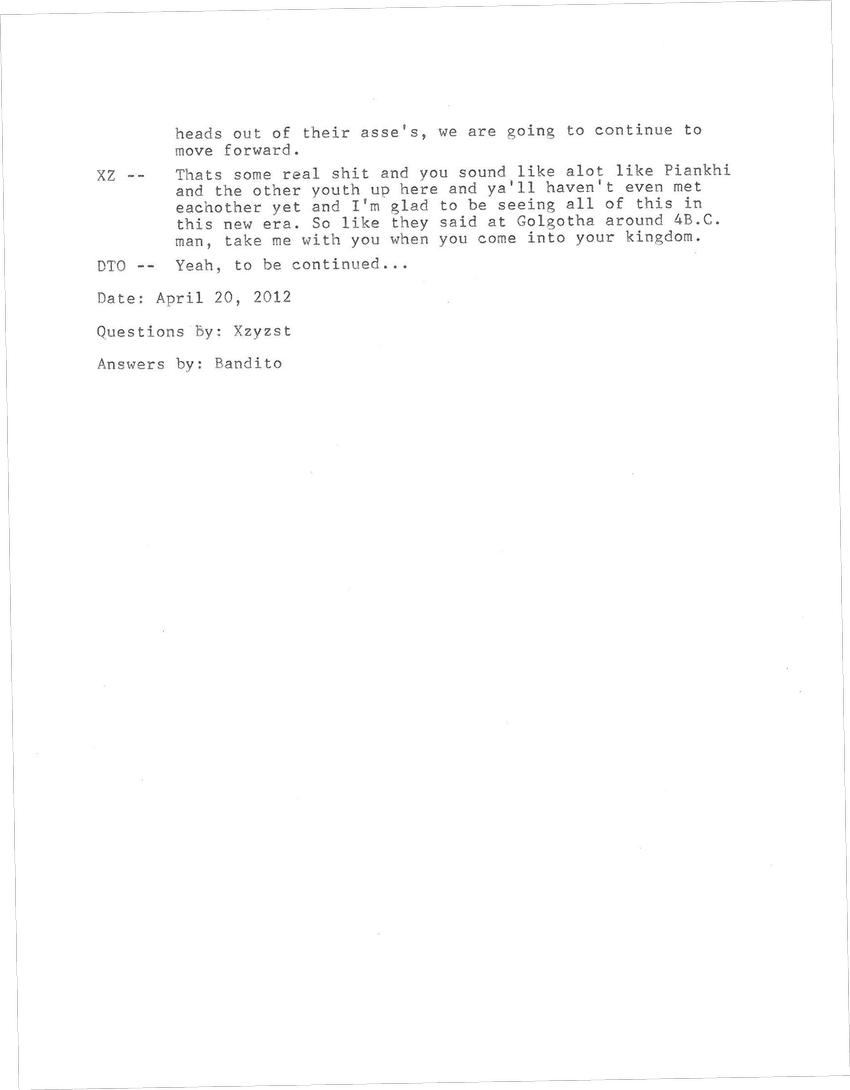 XZ -- A real prince of our people right here, what's up Bandito?

DTO -- Just kickin' it, what you got right here in that folder, some homework or something? You look like you on your way to school...LOL!

XZ -- Why are you taken off on me like you're, George Lopez, laundry bag chewin' ass...LOL

XZ -- Let the people know where you was raised.

XZ -- Let me get at you with this routine question because the answers compared with othrs is haunting. So, how old were you when you got arrested for whatever landed you onto deathrow?

XZ -- It's like they execute people when they get like in they're 50's and 60's. feel me? But the reality is they are giving the young generation the death penalty, from the jump.

DTO -- That's cold huh? Because I won't even be done with appeals when I turn 35 in the future.

XZ -- Not even close! Trip, is deathrow anything like you thought it was, before you got here?

DTO -- You know, to be honest I never really thought about it before, because I thought this place was for fools that rape and killed like 18 females and cases like that. I didn't know, how you say, "Street Level" things, Like a shoot out in the hood could do this, They don't even put us on the same yard with those people that be eating victims and crazy shit.

XZ -- You're firing on all cylinders right now, because it's like our generation thats up here, got "Street Level" crimes, We were accused of things compared to how the 70's & 80's got down, with zero "Street Level" shit. We are here with individuals that were eating people, Boy, what the hell? LOL.

XZ -- To qualify to get put up here, exactly. Man it's all about money and power or some demonic sick shit. Whatever it is, foul. They can legally kill me if I admit I'm a member of a gang. I wonder how many of our next generation even knows this?

DTO -- Thats some sick and twisted shit because they say don't kill, but they want to kill legally. Like killing is only legal for them and unlegal or not legal for other people. That don't make sense.

XZ -- I mean I never said it like that but you're right. I wonder if you can explain sick and twisted in your art work because I've seen some your art work, can you say that with art?

DTO -- And you mean like tell a story but not with words? It's funny you say that because I just did a drawing and I put sick and twisted on it. I mean everybody got a way to explain the death penalty, but I just think of it in that way, so that's why I say it's sick and twisted. Tell Piankhi I'll shoot it, so people can check it out in the zine.

XZ-- Number one, thank you,number two how long have you been drawing?

DTO -- I'd say in elementary school was when I started.

XZ -- Man I can't draw to save my life, but I'm noticing alot of our new generation can get off,so before I challenge you with an idea, lets open some history.

DTO -- You see that's the thing, back in 1952 inmate Alfredo Santos put up a mural in the south dining hall here on the mainline, it was like a story he was telling about California.

XZ -- Do you think it's still there because we on deathrow and never go to the dining hall so I wonder if his work is still up, old scholl potna was on some 1890's vintage shit man I wish I could've seen it.

DTO -- Did you read the part where it says the original 1982 mural across from the new hospital on that A/C wall oh, you got it, look right there for Gabriel, read that...

XZ -- Okiay, it says, "Due to inclement weather, the colors faded quickly and a group of men breathed new life into the image" those inmates were John Sklut, Scott McKinney, Gabriel Enriquez and Ron Goodman.

DTO -- So they saved it, he said something about us to, the new generation, it should be right under that part you just read.

XZ -- Peep, what he was saying was the S.Q. murals was painted over around here and okay here's the quote you was talking about: "These murals show a different side of the person who painted these walls, no matter what the artist was in prison for. Now a lot of that is gone and there is nothing for the new generation to appreciate."

DTO -- You see what I'm saying? Carry on tradition.

XZ -- Real talk, I already know where you going with this so I don't need to challenge you because it sound like you're about to lead the new generation on deathrow to come together and do a mural, man why not?

DTO -- Why not? And on top of that, dedicate the mural to Lynelle Herrick because she was the arts and crafts lady that inspired and helped the prisoners to keep those murals alive, it says she died of breast cancer, we can do this.

XZ -- Perfect idea, my boy "Q" would be all over this cause he's pushing convicts against cancer and what you saying is so on point.

DTO -- I saw that in the zine, his daughter had it? We can add her too or what?

XZ -- No, it was Whitey's daughter, man I can't wait to ask them to allow you to do a joint dedication that includes his baby girl, in fact "Q" is going to type this conversation up so I'm going to ask him to get at "Whitey" and see if the new generation can dedicate a mural in her honor along with Lynelle.

DTO -- All the administration can say is no, but why say no when all they need to do is give us these walls on the yards and pop the tops off all that unused paint. first of all it was very disrespectful to paint over the murals of men that worked on 'em, and we pose no security threat because we asking to do this together and this hasn't been done before on deathrow, never, in no time.

DTO -- I'm taking a wild guess and say 6 months cause I'm factoring in prison interruptions like lockdowns and shit, but it could probably be done sooner because when we work out all the details as one generation it can get done like that...real quick...Like in dry summer months...like June/July/Aug and Sept., feel me?

XZ -- So off the head, what would the mural be?

DTO -- When things go good, our multiple ideas can turn into multiple murals, but the first one would have to be something timeless and appeals to all cultures like, something like...

DTO -- It's gonna be hard to think of something that the cops won't try to turn into some gang shit like always.

XZ -- Nawh man, give me something, I know you already got something in mind, bring it.

DTO -- What about an inamte of each race, and above each man will be another rising picture of each man after he got out of prison or off the row, like the latino could rise into a good father holding his kid, the black inmate can rise into restaurant owner (chef), the native american can rise into a solar energy tech and on and on you feel me?

DTO --- Like you always say, "new generation rising," I don't know, what about a series of cultural evolution ideas like a panoramic view of prison culture over the years like a story about from, no radio to 8tracks, to cassettes, to boomboxes, to cd's to Ipods to Ipod nanos we can wear like wrist watches on the yard.

XZ -- I can see a visual of that mural in my mind right now because each generation even wear prison clothes so not the same as time technology and fashion evolved. And I can see us with Ipod nano watches and scull candy on the yard.

DTO -- That's funny, same prison clothes but it's the way we wear shit like those skinny jeans you got on...Lol

XZ -- I'm from the hip-hop generation, but that don't mean you will ever catch me in some skinny jeans, just like I better not ever catch you with your pants pulled all the way up past your chest like they did in the 80's (both laughting).

DTO -- It's crazy how the temp just drop like that here on deathrow, creepy ass shit. (both simultaneously put on beanies).

XZ -- Well, my lil mexican potna, brace up for the last ultimate question. Lets say all goes well and the administration shock us with a yes for this project, how will you respond to the haterz that don't want to see a multicultural diverse new generation moving in the same direction because you already know how foolz are, and a project like this could make that jealousy shit crack even more feel me?

DTO -- Most of us already think like Piankhi anyway and if I was worried about any criticizm I wouldn't be doing this at all and I'm a grown ass man and those individuals are just stuck in them old ways and with or without them a new generation is on the rise and thinking for ourselves. What would be better is if some of those older individuals would be involved in the creative aspect of the development of this mural project because lets be honest we still can be taught some shit, but until foolz are able to somehow pop their heads out of their asses, we are going to continue to move forward.

XZ -- That's some real shit and you sound like alot like Piankhi and the other youth up here and ya'll haven't even met each other yet and I'm glad to be seeing all of this in this new era. So like they said at Golgotha around 4 B.C. man, take me with you when you come into your kingdom.

A shootout in the hood..........and you don't think you should be on the row for that. Every year black on black murders are the biggest crime statistic in the country. Hundreds of innocents slaughtered along with the bangers and that's just a street level thing. No big thing. 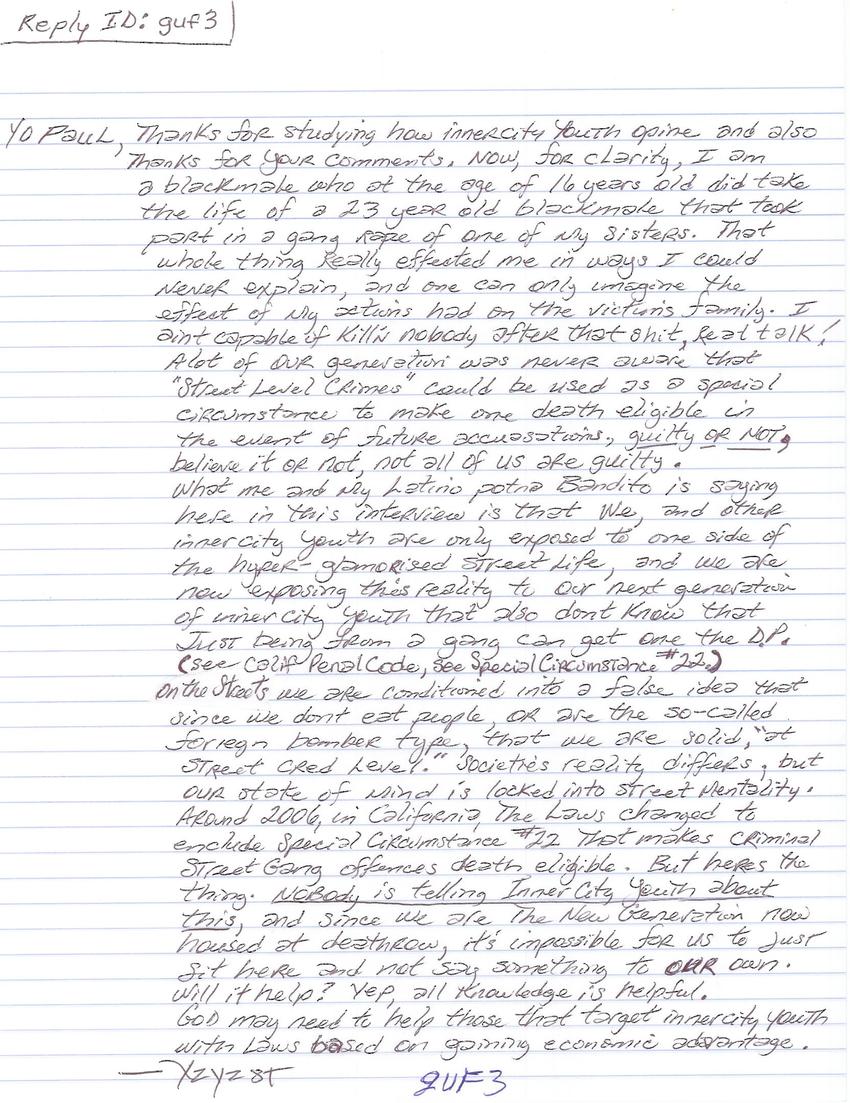