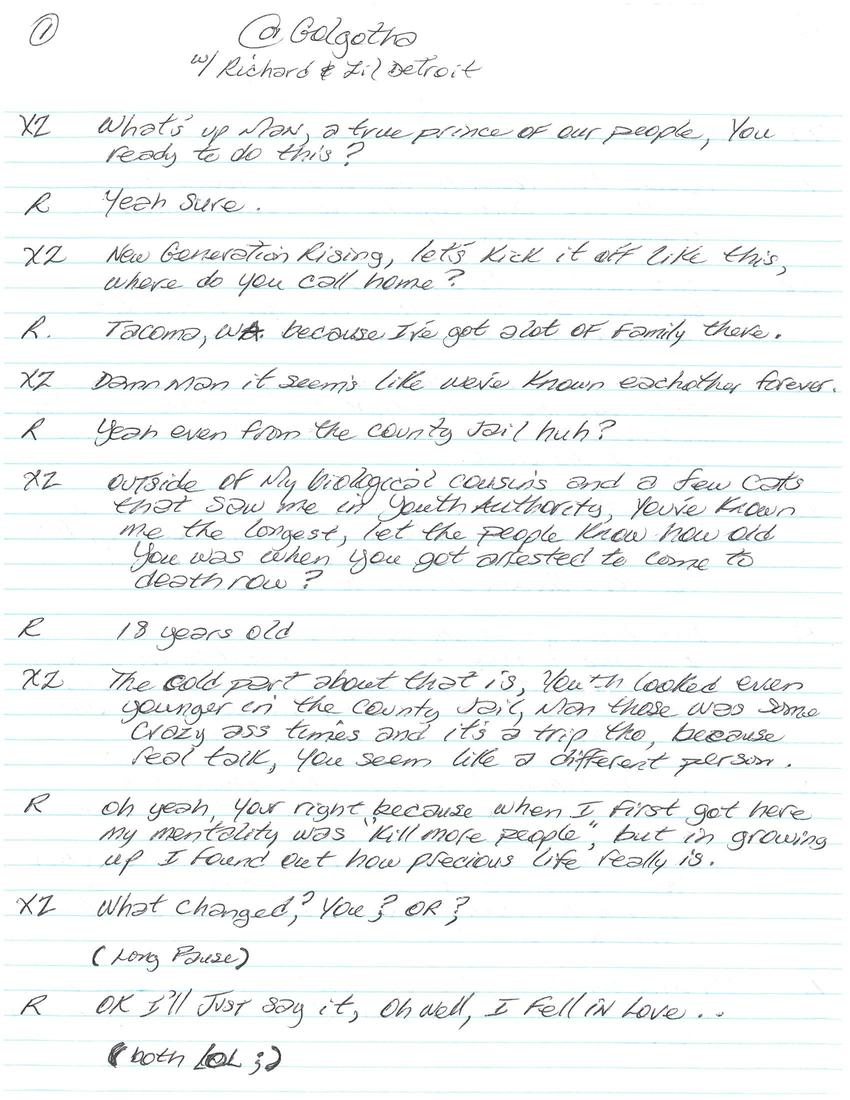 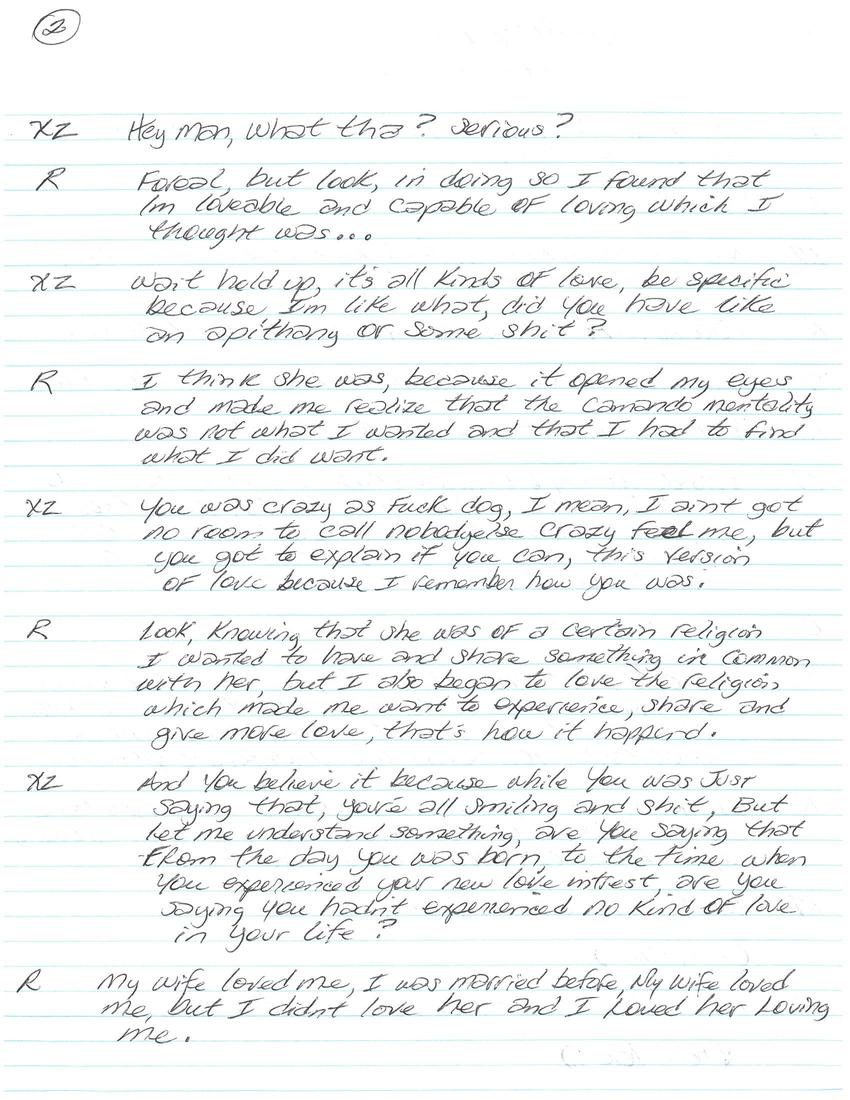 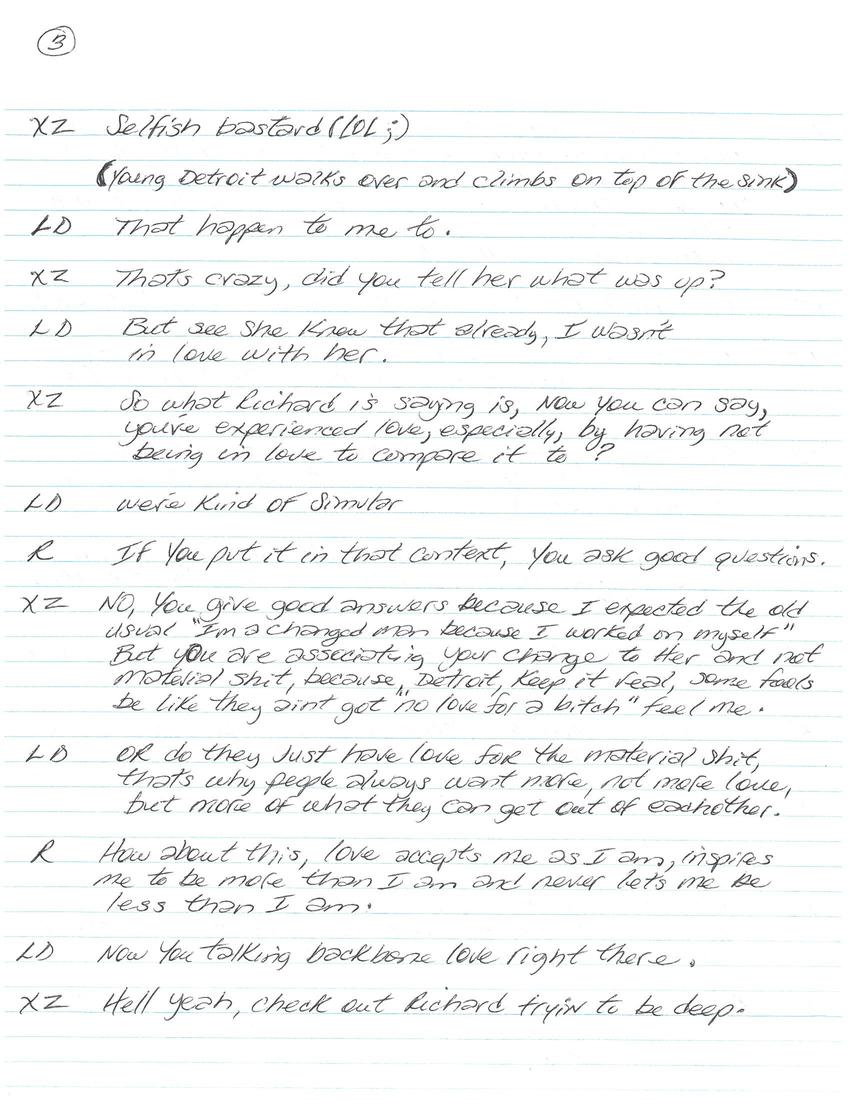 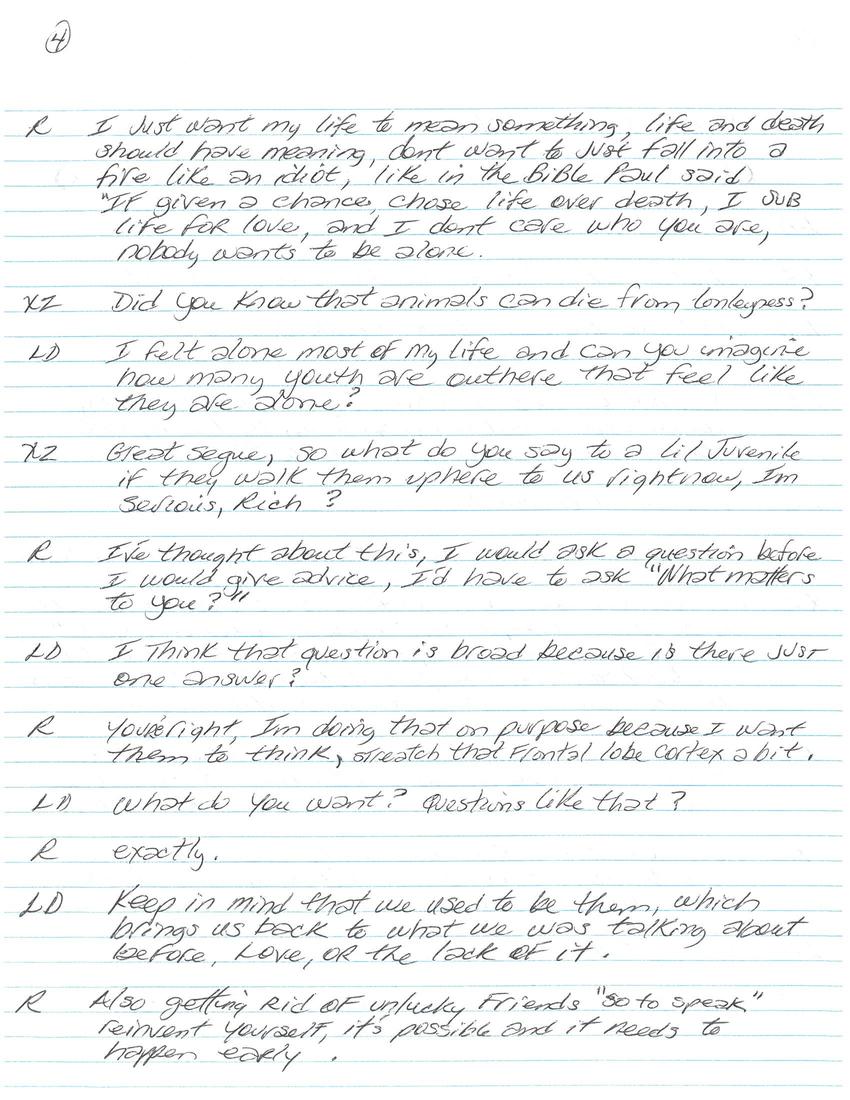 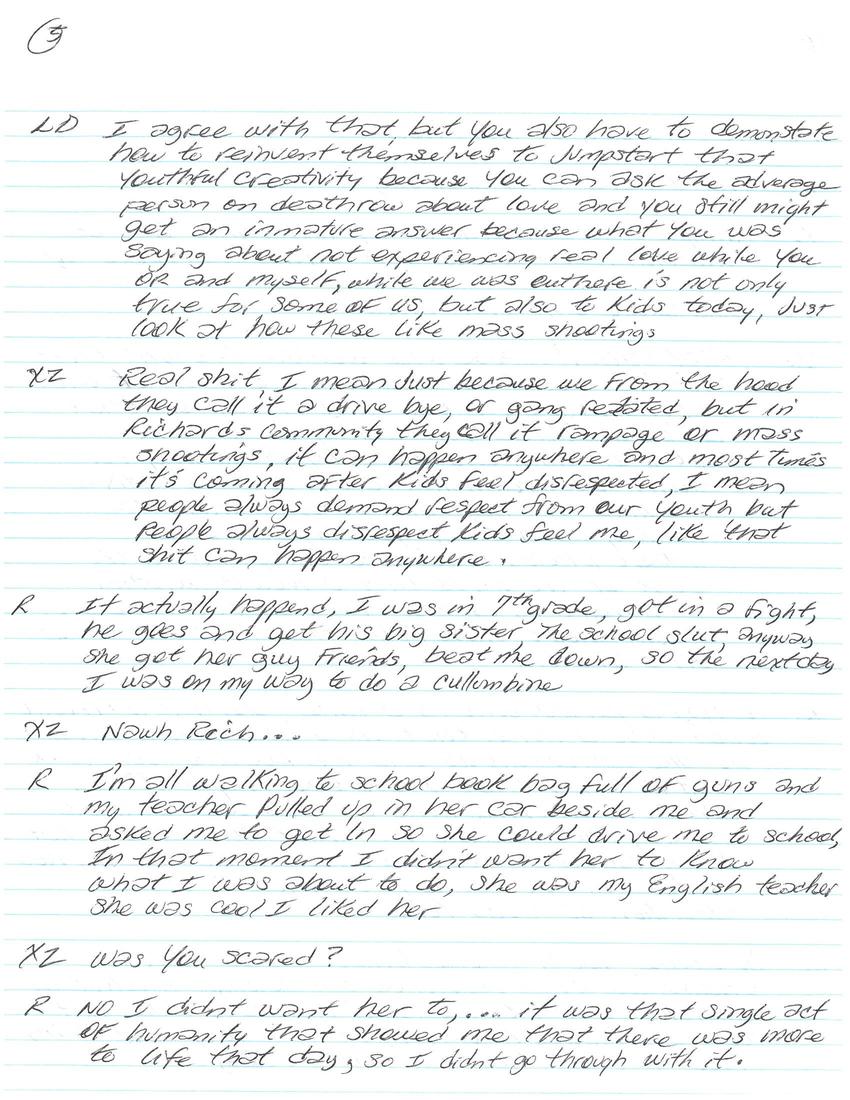 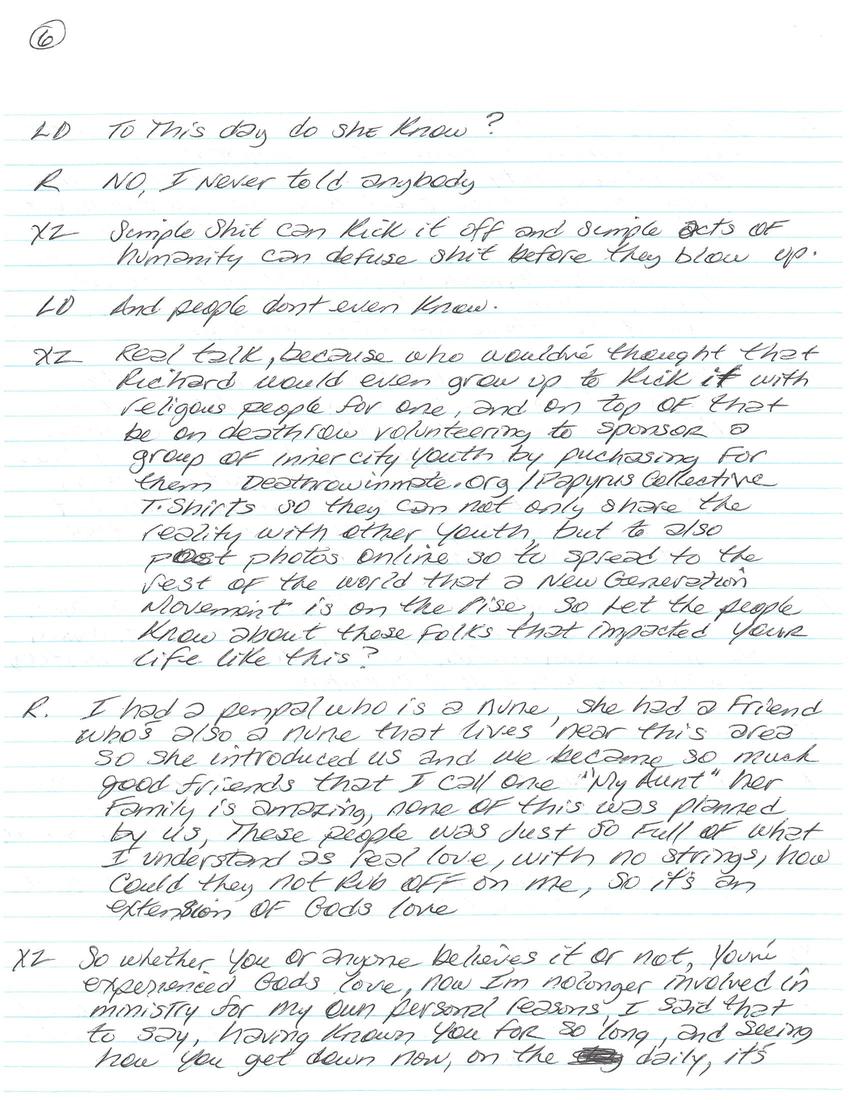 XZ: What's up man, a true prince of our people, you ready to do this?

XZ: New Generation Rising, let's kick it off like this, where do you call home?

R: Tacoma, WA, because I've got a lot of family there.

XZ: Damn, man, it seems like we've known each other forever.

R: Yeah, even from the county jail, huh?

XZ: Outside of my biological cousins and a few cats that saw me in Youth Authority, you've known me the longest, let the people know how old you was when you got arrested to come to death row?

XZ: The cold part about that is, youth looked even younger in the county jail, man, those was some crazy ass times and it's a trip tho, because real talk, you seem like a different person.

R: Oh yeah, you're right because when I first got here, my mentality was "kill more people", but in growing up I found out how precious life really is.

R: For real, but look, in doing so I found that I'm loveable and capable of loving, which I thought was...

XZ: Wait, hold up, it's all kinds of love, be specific because I'm like what, did you have like an epiphany or some shit?

R: I think she was, because it opened my eyes and made me realize that the commando mentality was not what I wanted and that I had to find what I did want.

XZ: You was crazy as fuck dog, I mean, I ain't got no room to call nobody else crazy, feel me, but you got to explain if you can, this version of love because I remember how you was.

R: Look, knowing that she was a certain religion, I wanted to have and share something in common with her, but I also began to love the religion, which made me want to experience, share and give more love, that's how it happened.

(Young Detroit walks over and climbs on top of the sink)

LD: That happen to me too.

XZ: That's crazy, did you tell her what was up?

LD: But see, she knew that already, I wasn't in love with her.

XZ: So what Richard is saying is, now you can say, you've experienced love, especially, by having not being in love to compare it to?

R: If you put it in that context, you ask good questions.

XZ: No, you give good answers because I expected the old usual "I'm a changed man because I worked on myself". But you are associating your change to her and not material shit, because, Detroit, keep it real, some fools be like they ain't got "no love for a bitch", feel me.

LD: Or do they just have love for the material shit, that's why people always want more, not more love, but more of what they can get out of each other.

R: How about this, love accepts me as I am, inspires me to be more than I am and never lets me be less than I am.

XZ: Hell yeah, check out Richard tryin' to be deep.

R: I just want my life to mean something, life and death should have meaning, don't want to just fall into a fire like an idiot, like in the Bible Paul said "If given a chance, choose life over death", I sub life for love, and I don't care who you are, nobody wants to be alone.

XZ: Did you know that animals can die from loneliness?

LD: I felt alone most of my life and can you imagine how many youth are out there that feel like they are alone?

XZ: Great segue, so what do you say to a lil juvenile if they walk them up here to us right now, I'm serious, Rich?

R: I've thought about this, I would ask a question before I would give advice, I'd have to ask "What matters to you?"

LD: I think that question is broad because is there just one answer?

R: You're right, I'm doing that on purpose because I want them to think, stretch their frontal lobe cortex a bit.

LD: Keep in mind that we used to be them, which brings us back to what we was talking about before, love, or the lack of it.

R: Also getting rid of unlucky friends "so to speak", reinvent yourself, it's possible and it needs to happen early.

LD: I agree with that, but you also have to demonstrate how to reinvent themselves to jumpstart that youthful creativity because you can ask the average person on death row about love and you still might get an immature answer because what you was saying about not experiencing real love while you or and myself, while we was out there, is not only true for some of us, but also to kids today, just look at how these like mass shootings.

XZ: Real shit, I mean just because we from the hood they call it a drive by, or gang related, but in Richard's community they call it rampage or mass shootings, it can happen anywhere and most times it's coming after kids feel disrespected, I mean people always demand respect from our youth but people always disrespect kids, feel me, like that shit can happen anywhere.

R: It actually happened, I was in 7th grade, got in a fight, he goes and get his big sister, the school slut, anyway she get her guy friends, beat me down, so the next day I was on my way to do a Columbine.

R: I'm all walking to school, book bag full of guns and my teacher pulled up in her car beside me and asked me to get in so she could drive me to school. In that moment I didn't want her to know what I was about to do, she was my English teacher, she was cool, I liked her.

XZ: Was you scared?

R: No, I didn't want her to... it was that single act of humanity that showed me that there was more to life that day, so I didn't go through with it.

R: No, I never told anybody.

XZ: Simple shit can kick it off and simple acts of humanity can defuse shit before they blow up.

LD: And people don't even know.

XZ: Real talk, because who would've thought that Richard would even grow up to kick it with religious people for one, and on top of that be on death row volunteering to sponsor a group of inner city youth by purchasing for them deathrowinmate.org/Papyrus Collective T-shirts so they can not only share the reality with other youth, but to also post photos online so to spread to the rest of the world that a New Generation Movement is on the rise, so let the people know about these folks that impacted your life like this?

R: I had a penpal who is a nun, she had a friend who's also a nun that lives near this area, so she introduced us and we became so much good friends that I call one "My Aunt". Her family is amazing, none of this was planned by us, these people was just so full of what I understand as real love, with no strings, how could they not rub off on me, so it's an extension of God's love.

XZ: So whether you or anyone believes it or not, you've experienced God's love, now I'm no longer involved in ministry for my own personal reasons, I said that to say, having known you for so long, and seeing how you get down now, on the daily, it's obvious to me that wherever these people draw from, you are proof that they are for real, so let them know that their love is about to reach the streets of the inner cities of Compton, and Los Angeles, California, and as it was said near the 4th millennium B.C., take me with you when you come into your kingdom.

LD: What did you say about the 4th millennium?

XZ: We was ending the @ Golgotha cipher, man, you fucked me up with that "You loved her loving you".

LD: And not loving her.

XZ: That is some interesting shit, what tha?

XZ: Yeah, ya think? I learned something new today, and your English teacher also saved a lot of lives that day, man, I can't wait to read this in the fine project.

R: What's up with the artwork I did of the guy standing on the corner?

XZ: I hope Piankhi put it in his all things Xzyzst zine, but I wanted to use it for the noise trade project, don't trip, it's on.