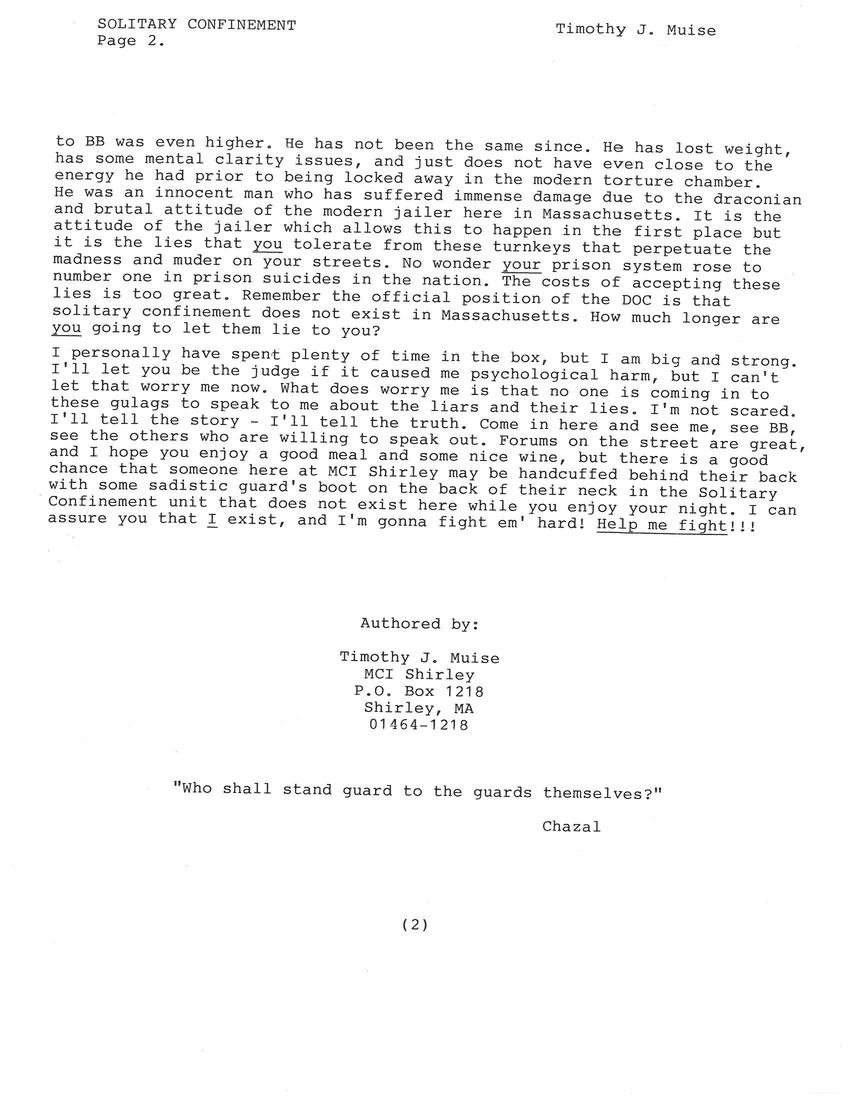 SOLITARY CONFINEMENT IN MASSACHUSETTS
DOC SAYS,
"IT DOES NOT EXIST"

I'm proud to say that James Ridgeway, the director of Solitary Watch and senior reporter at Mother Jones magazine, is a friend of mine. The last time I was in "solitary" Jim called the DOC attempting to get info on me and my being in the box (as prisoners like to call solitary). The DOC media coordinator, Dianne Wiffin, told Jim and Massachusetts does not have solitary confinement. The statement reminded me of Clinton saying that he did not have sex with that woman or Lance Armstrong maintaining that he never blood doped. Their Pinnochio noses grow as they utter the words!

Massachusetts has "solitary" units at almost all of its prisons. They call them SMU, DSU, DDU or AD SEG, but they are all[underlined] solitary confinement units and they are as real as rain (but not as gentle). The psychological damages these units cause diminshes public safety in such a real and measureable way (Massachusetts has a 49% recidivism rate in state prison). The blind eye has been turned as the general public are told more lies about how these units hold the "worst of the worst" when they "misbehave". Let me give you one recent example.

One of my best friends, a 73 year old lifer, was recently assaulted by a drunken 38 year old weight lifter. There was no fight, just some drunken fool (who, by the way, was in prison for killing someone in a drunken fight and had been transferred here to MCI Shirley for biting off someone's ear at MCI Norfolk) who chose to assault an elderly prisoner who could not defend himself. My friend tried to hide his injuries but eventually, due to his black eye and swollen jaw, was caught. He was taken to the "box" and received a disciplinary report for fighting. He fought no one and was aghast at the d-report.

In the box BB was told that if he chose to "fight" the d-report (in other words to profess his real innocence) he would remain in the box until the conclusion of the matter. This takes months, but BB was innocent and was not going to plead guilty to something he did not do, but even more damning is that he was a victim of an assault and now was being punished for it. BB remained in the hole for over seven (7) months![bold and underlined] He eventually had the charges dismissed (he had to hire a paid attorney) but that is not the real sick part of the story. Read on.

While in the box BB was routinely denied his life sustaining medications. What could he do? He was locked in a cage. This caused him to suffer six separate heart episodes requiring that he be transferred by ambulance to outside hospitals for treatment, many times requiring overnight stays. Do you know what that cost the state? The cost is astronomical. The cost to BB was even higher. He has not been the same since. He has lost weight, has some mental clarity issues, and just does not have even close to the energy he had prior to being locked away in the modern torture chamber. He was an innocent man who has suffered immense damage due to the draconian and brutal attitude of the modern jailer here in Massachusetts. It is the attitude of the jailer which allows this to happen in the first place but it is the lies that you[underlined] tolerate from these turnkeys that perpetuate the madness and murder on your streets. No wonder your[underlined] prison system rose to number one in prison suicides in the nation. The costs of accepting these lies is too great. Remember the official position of the DOC is that solitary confinement does not exist in Massachusetts. How much longer are you[underlined] going to let them lie to you?

I personally have spent plenty of time in the box, but I am big and strong. I'll let you be the judge if it caused me psychological harm, but I can't let that worry me now. What does worry me is that no one is coming in to these gulags to speak to me about the liars and their lies. I'm not scared. I'll tell the story - I'll tell the truth. Come in here and see me, see BB, see the others who are willing to speak out. Forums on the street are great, and I hope you enjoy a good meal and some nice wine, but there is a good chance someone here at MCI Shirley may be handcuffed behind their back with some sadistic guard's boot on the back of their neck in the Solitary Confinement unit that does not exist here while you enjoy your night. I can assure you that I[underlined] exist, and I'm gonna fight 'em hard! Help me fight!!![underlined]

"Who shall stand guard to the guards themselves?"