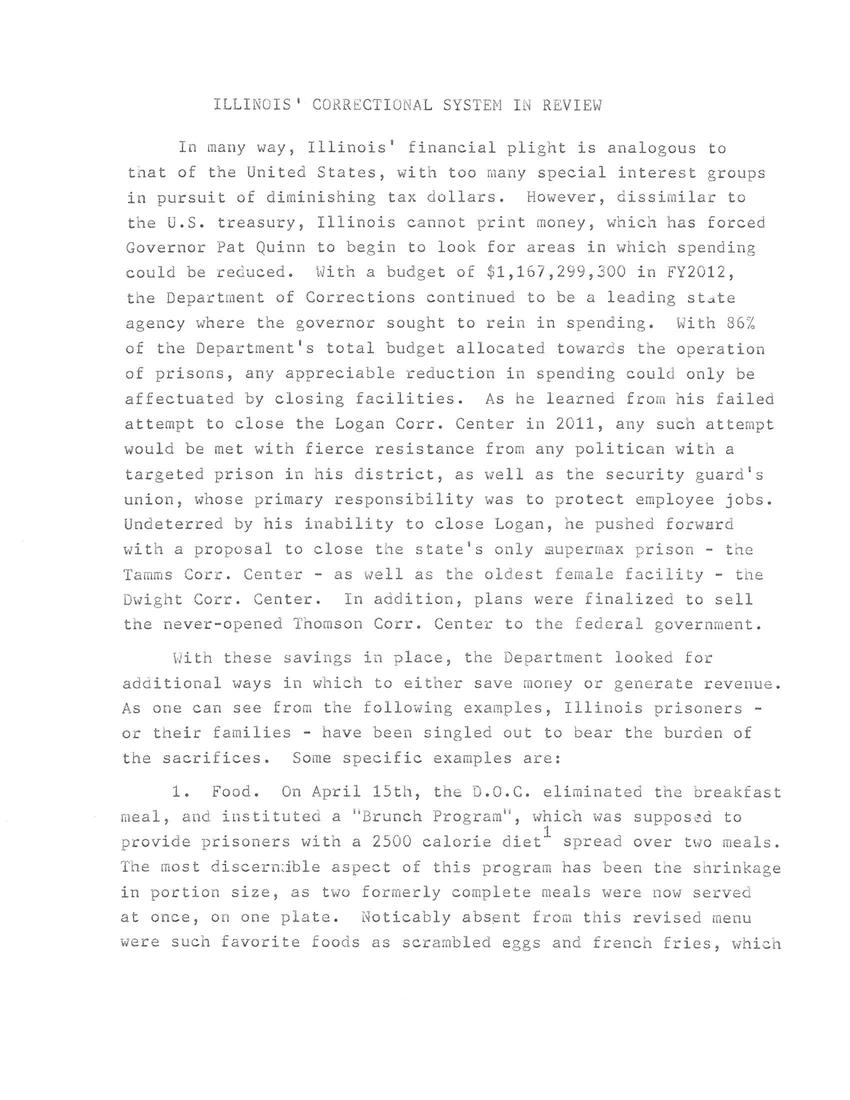 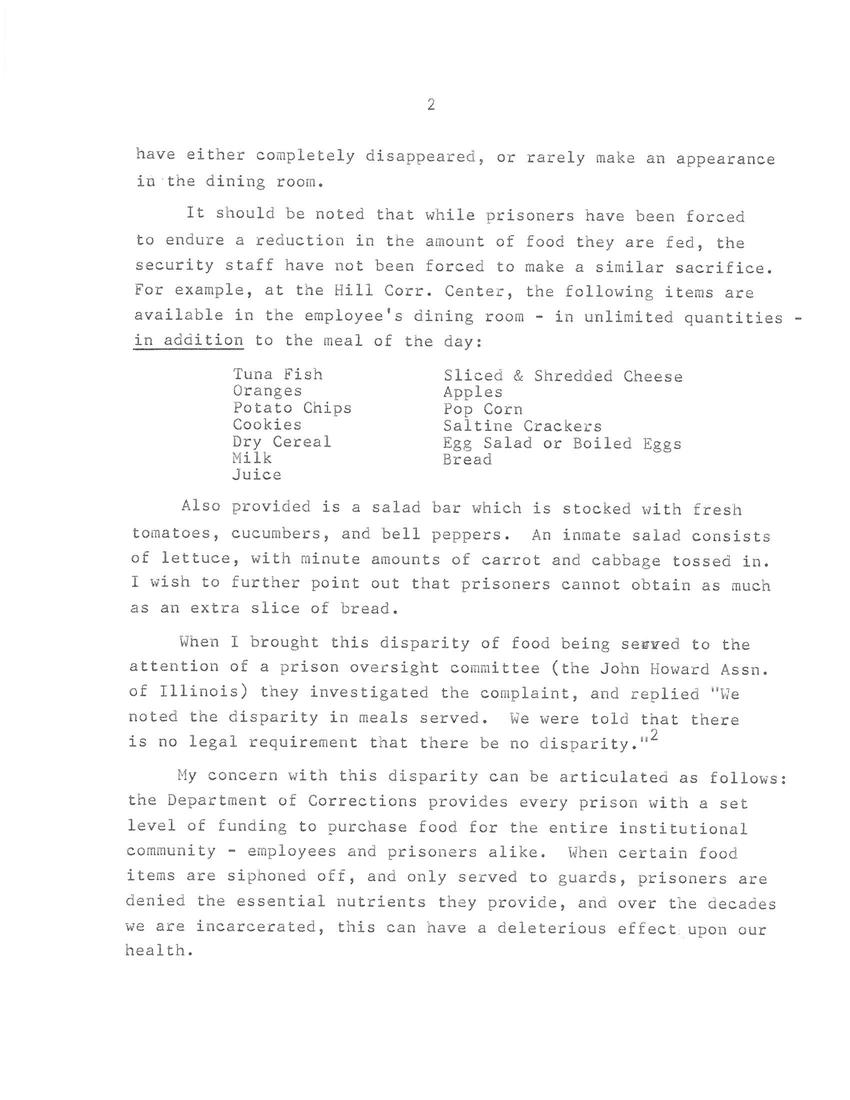 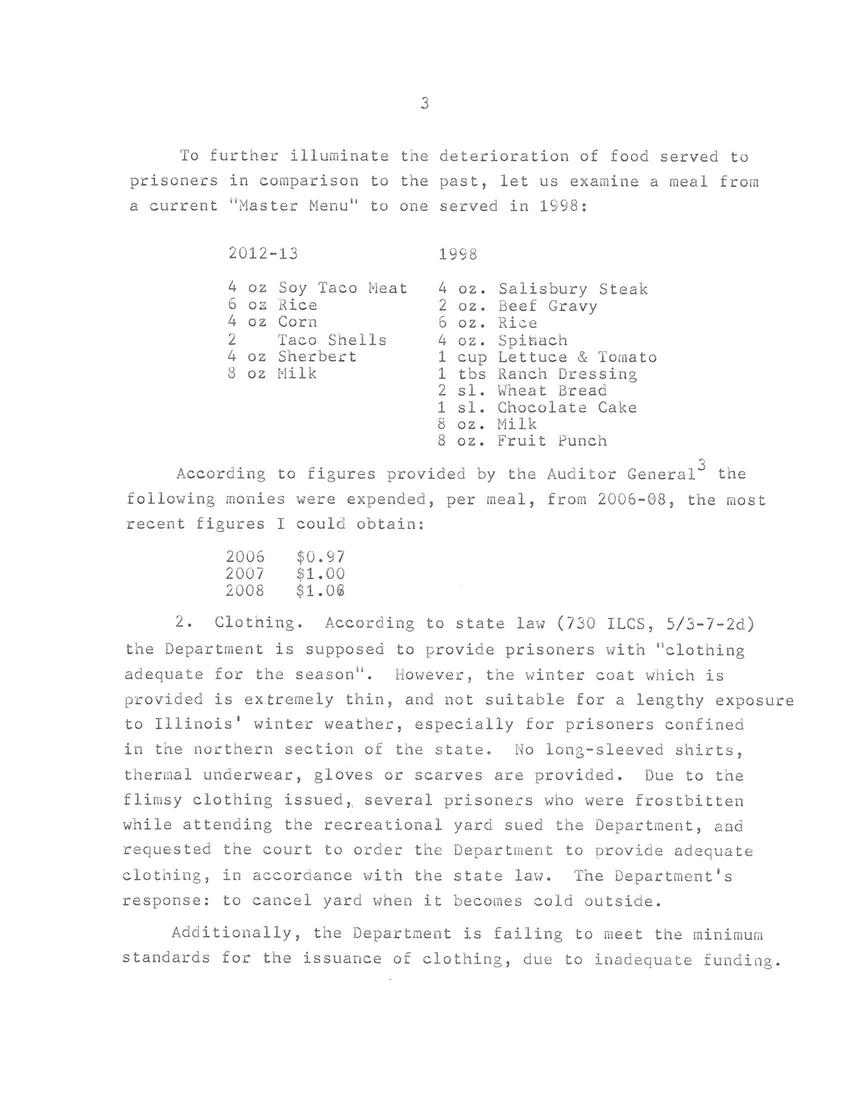 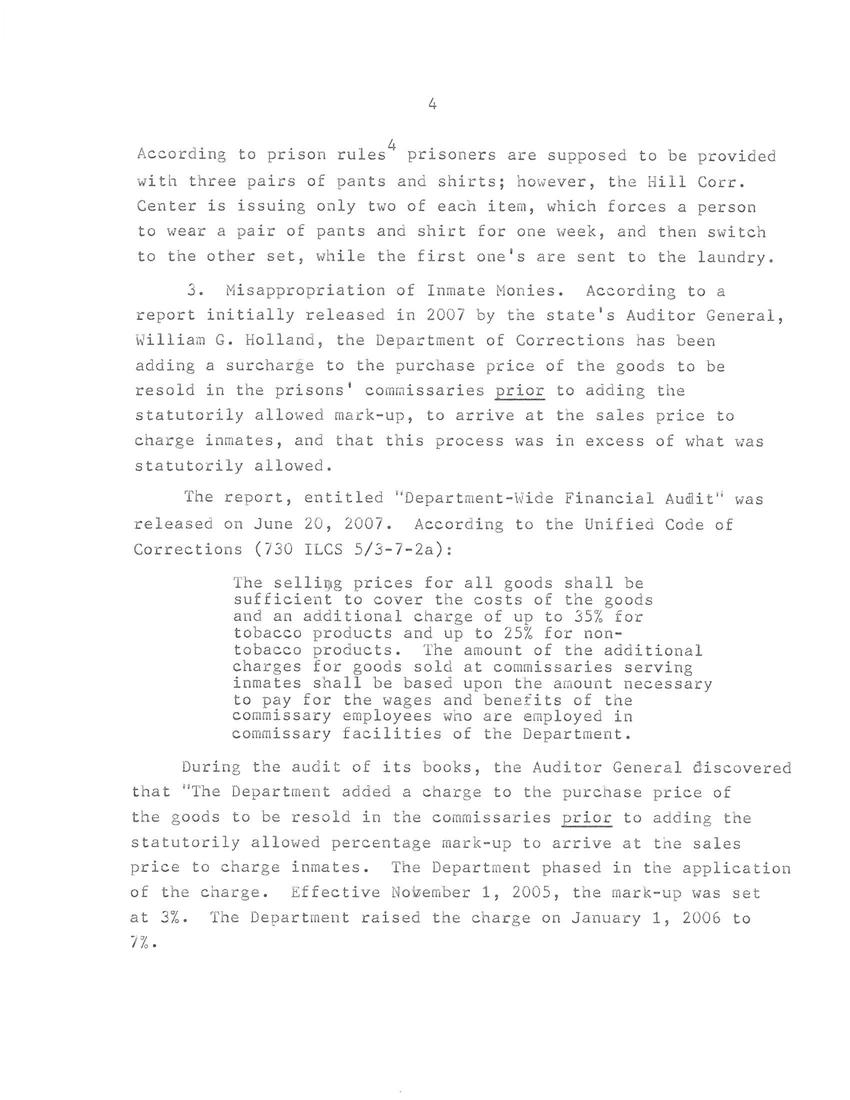 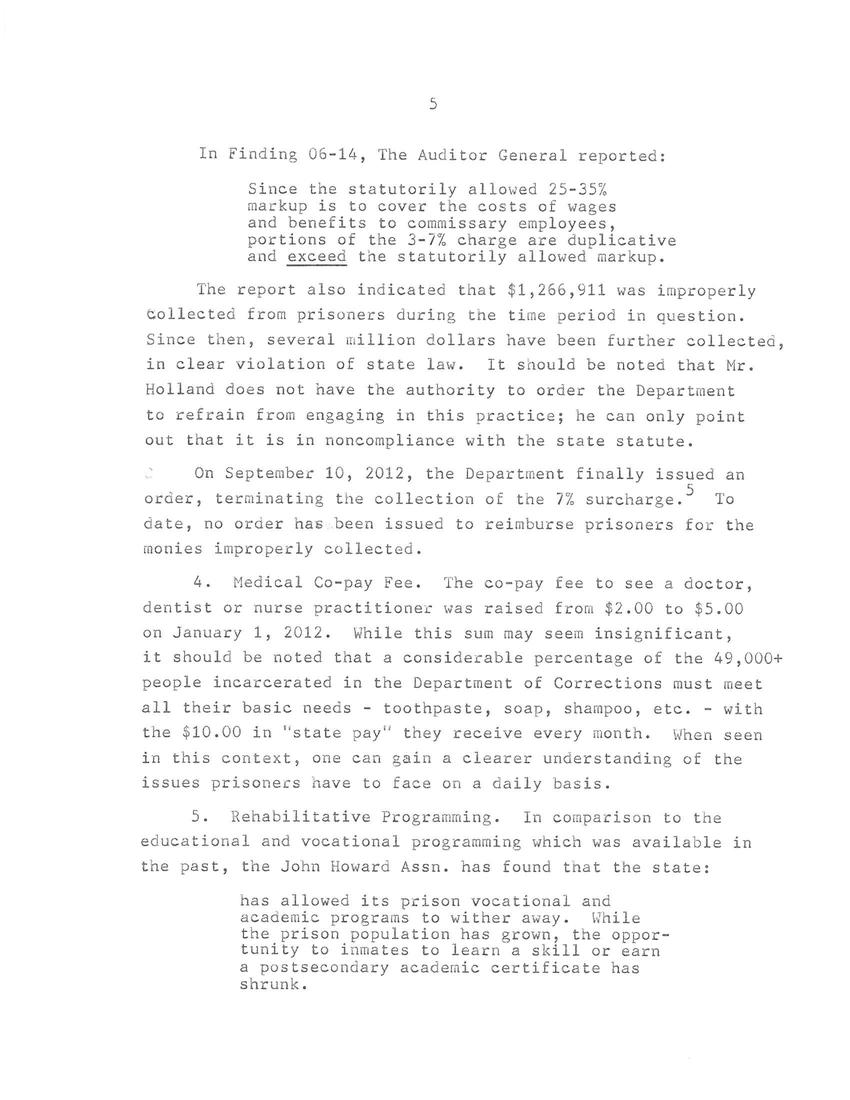 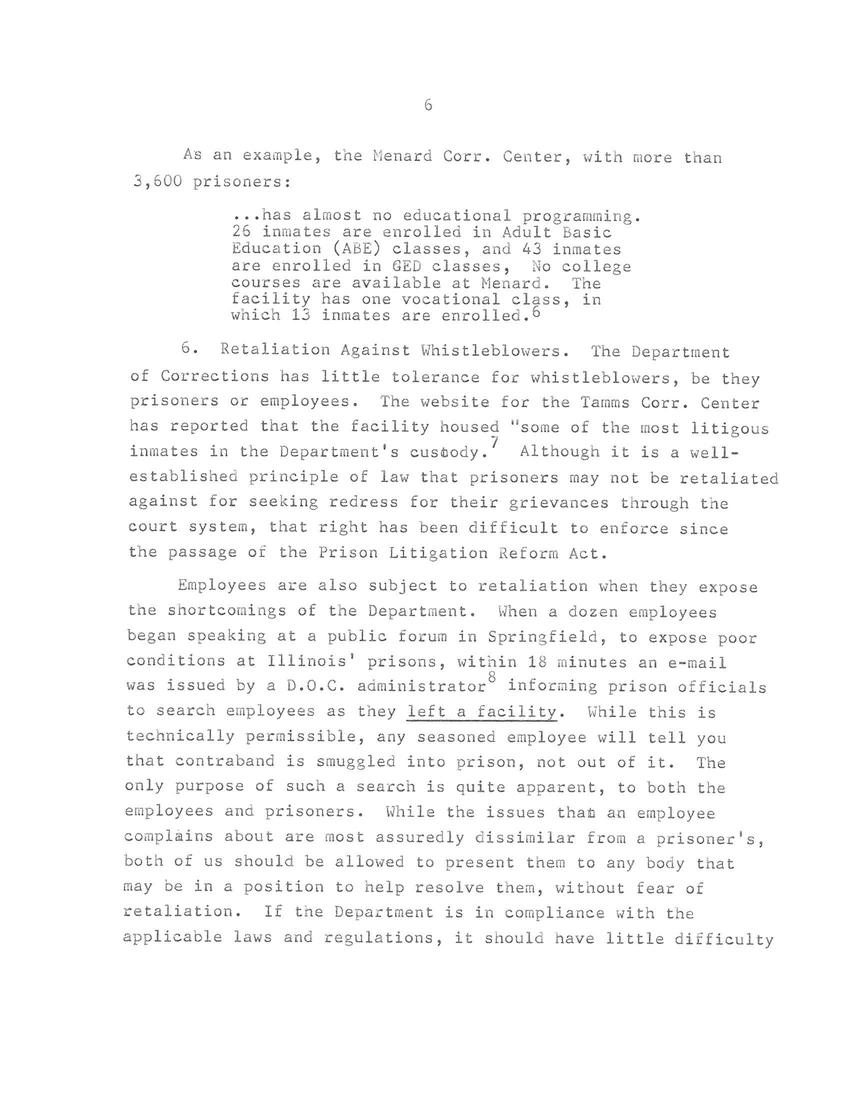 In many ways, Illinois' financial plight is analogous to that of the United States, with too many special interest groups in pursuit of diminishing tax dollars. However, dissimilar to the U.S. treasury, Illinois cannot print money, which has forced Governor Pat Quinn to begin to look for areas in which spending can be reduced. With a budget of $1,167,299,300 in FY2012, the Department of Corrections continued to be a leading state agency where the governor sought to rein-in spending. With 86% of the department's total budget allocated towards the operation of prisons, any appreciable reduction in spending could only be effectuated by closing facilities. As he learned from his failed attempt to close the Logan Corr. Center in 2011, any such attempt would be met with fierce resistance from any politician with a targeted prison in his district, as well as the security guard's union, whose primary responsibility was to protect employee jobs. Undeterred by his inability to close Logan, he pushed forward with a proposal to close the state's only supermax prison - the Dwight Corr. Center. In addition, plans were finalised to sell the never-opened Thomson Corr. Center to the federal government.

With these savings in place, the department looked for additional ways in which to either save money or generate revenue. As one can see from the following examples, Illinois prisoners - or their families - have been singled-out to bear the burden of the sacrifices. Some specific examples are:

1. Food. On April 15th, the D.O.C. eliminated the breakfast meal, and instituted a "brunch program," which was supposed to provide prisoners with a 2500 calorie diet(1) spread over two meals. The most discernible aspect of this program has been the shrinkage in portion size, as two formerly complete meals were now served at once, on one plate. Noticeably absent from this revised menu were such favorite foods as scrambled eggs and french fries, which have either completely disappeared, or rarely make an appearance in the dining room.

It should be noted that while prisoners have been forced to endure a reduction in the amount of food they are fed, the security staff have not been forced to make a similar sacrifice. For example, at the Hill, Corr. Center, the following items are available in the employee's dining room - in unlimited quantities - in addition to the meal of the day:

Also provided is a salad bar which is stocked with fresh tomatoes, cucumbers, and bell peppers. An inmate salad consists of lettuce, with minute amounts of carrot and cabbage tossed in. I wish to further point out that prisoners cannot obtain so much as an extra slice of bread.

When I brought this disparity of food being served to the attention of the prison oversight committee (the John Howard Assn. of Illinois) they investigated the complaint, and replied "we noted the disparity in meals served. We were told that there is no legal requirement that there by no disparity." (2)

My concern with this disparity can be articulated as follows: the Department of Corrections provides every prison with a set level of funding to purchase food for the entire institutional community - employees and prisoners alike. When certain food items are siphoned off, and only served to guards, prisoners are denied the essential nutrients they provide, and over the decades we are incarcerated, this can have a deleterious effect upon our health.

To further illuminate the deterioration of food served to prisoners in comparison to the past, let us examine a meal from a current "master menu" to one served in 1998:

According to figures provided by the Auditor General (3) the most following monies were expended, per meal, from 2006-08, the most recent figures I could obtain:

2. Clothing. According to state law (730 ILCS, 5/3-7-2d) the department is supposed to provide prisoners with "clothing appropriate for the season." However, the winter coat which is provided is extremely thin, and not suitable for a length exposure to Illinois' winter weather, especially for prisoners confined to the northern section of the state. No long-sleeved shirts, thermal underwear, gloves or scarves provided. Due to the flimsy clothing issued, several prisoners who were frostbitten while attending the recreational yard sued the department, and requested the court to order the department to provide adequate clothing, in accordance with the state law. The department's response: to cancel yard when it becomes cold outside.

Additionally, the department is failing to meet the minimum standards for the issuance of clothing, due to inadequate funding.

According to prison rules (4) prisoners are supposed to be provided with three pairs of pants and shirts; however, the Hill Corr. Center is issuing only two of each item, which forces a person to wear a pair of pants and shirt for one week, and then switch to the other set, while the first ones are sent to the laundry.

3. Misappropriation of inmate monies. According to a report initially released in 2007 by the state's Auditor General, William G. Holland, the Department of Corrections has been adding a surcharge to the purchase price of the goods to be re-sold in the prisons' commissaries prior to adding the statutorily allowed mark-up, to arrive at the sales price to charge inmates, and that this process was in excess of what was statutorily allowed.

The selling prices of all goods shall be sufficient to cover the costs of the goods and an additional charge of up to 35% for tobacco products and up to 25% for non-tobacco products. The amount of the additional charges for goods sold at commissaries serving inmates shall be based upon the amount necessary to pay for the wages and benefits of the commissary employees who are employed in the commissary facilities of the department.

During the audit of its books, the Auditor General discovered that "the department added a charge to the purchase price of the goods to be re-sold prior to adding the statutorily allowed percentage mark-up to arrive at the sales price to charge inmates. Effective November 1, 2005, the mark-up was set at 3%. The department raised the charge on January 1, 2006 to 7%.

In Finding 06-14, the Auditor General reported:

The report also indicated that $1,266,911 was improperly collected from prisoners during the time period in question. Since the, several million dollars have been further collected, in clear violation of state law. It should be noted that Mr. Holland does not have the authority to order the department to refrain from engaging in this practise; he can only point out that it is in non-compliance with the state statute.

On September 10, 2012, the department finally issued an order, terminating the collection of the 7% surcharge.(5) To date, no order has been issued to re-imburse prisoners for the monies improperly collected.

4. Medical co-pay fee. The co-pay fee to see a doctor, dentist, or nurse practitioner was raised from $2.00 to $5.00 on January 1, 2012. While this sum may seem insignificant, it should be noted that a considerable percentage of the 49,000+ people incarcerated in the Department of Corrections must meet all their basic needs - toothpaste, soap, shampoo, etc. - with the $10.00 in "state pay" they receive every month. When seen in this context, one can gain a clearer understanding of the issues prisoners have to face on a daily basis.

5. Rehabilitative programming. In comparison to the education and vocational programming which was available in the past, the John Howard Assn. has found that the state:

has allowed its prison vocational and academic programs to wither away. While the prison population has grown, the opportunity to inmates to learn a skill or earn a postsecondary academic certificate has shrunk.

As an example, the Menard Corr. Center, with more than 3,600 prisoners:

6. Retaliation against whistleblowers. The Department of Corrections has little tolerance for whistleblowers, be they prisoners or employees. The website for the Tamms Corr. Center has reported the facility housed "some of the most litigious inmates in the department's custody."(7) Although it is a well-established principle of law that prisoners may not be retaliated against for seeking redress for their grievances through the court system, that right has been difficult to enforce since the passage of the Prison Litigation Reform Act.

Employees are also subject to retaliation when they expose the shortcomings of the department. When a dozen employees began speaking at a public forum in Springfield, to expose poor conditions at Illinois' prisons, within 18 minutes an e-mail was issued by a D.O.C. administrator (8) informing prison officials to search employees as they left a facility. While this is technically permissible, any seasoned employee will tell you that contraband is smuggled into prison, not out of it. The only purpose of such a search is quite apparent, to both employees and prisoners. While the issues that an employee complains about are most assuredly dissimilar from a prisoner's, both of us should be allowed to present them to anybody that may be in a position to help resolve them, without fear of retaliation. If the department is in compliance with the applicable laws and regulations, it should have little difficulty in refuting any allegations of impropriety; if not, it should take the corrective action necessary to resolve them, and not attempt to intimidate people into submission.

Conclusion. With this article, it has been my intention to educate the public about some of the most pressing issues confronting those of us who are incarcerated, as well as our loved ones. The prison industrial complex has a well-oiled publicity machine which is extraordinarily capable of disseminating their point of view. It is my desire to be a counter-balance, and give you ours. 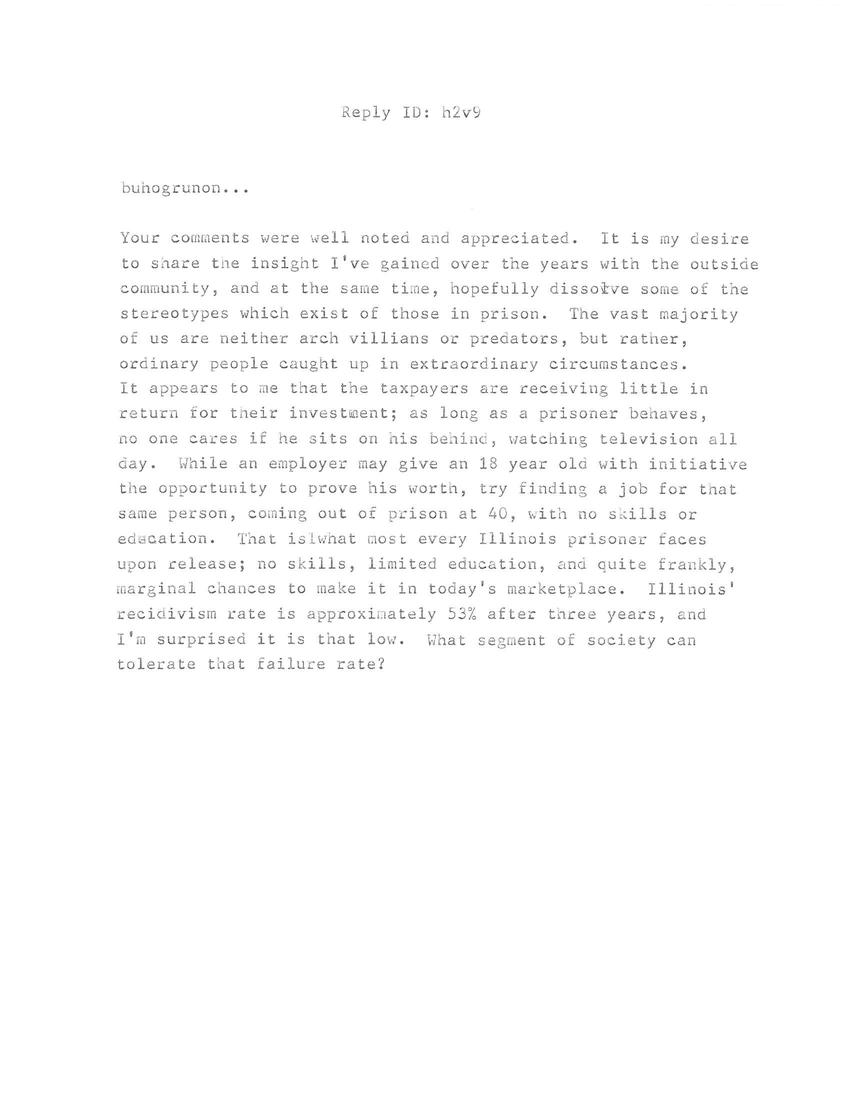