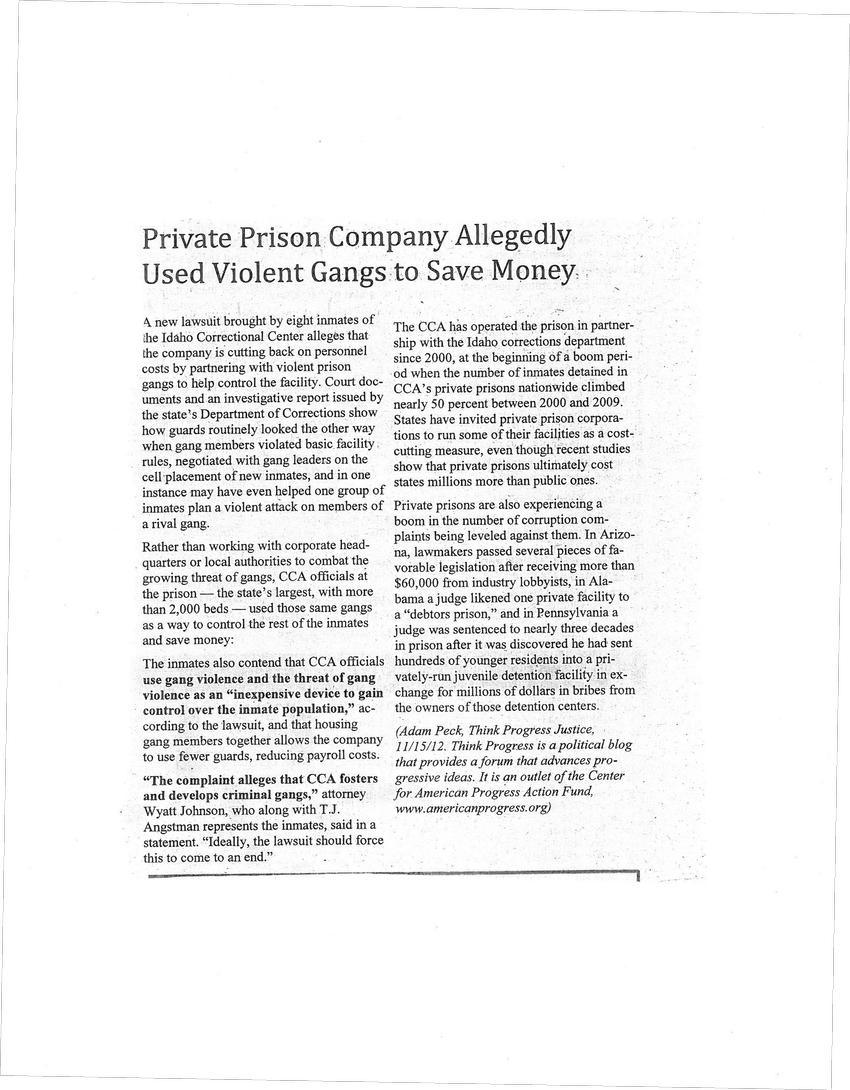 A new lawsuit brought by eight inmates of the Idaho Correctional Center alleges that the company is cutting back on personnel costs by partnering with violent prison gangs to help control the facility. Court documents and an investigative report issued by the state's Department of Corrections show how guards routinely looked the other way when gang members violated basic facility rules, negotiated with gang leaders on the cell placement of new inmates, and in one instance may have even helped one group of inmates plan a violent attack on members of a rival gang.

Rather than working with corporate headquarters or local authorities to combat the growing threat of gangs, CCA officials at the prison - the state's largest, with more than 2,000 beds - used those same gangs as a way to control the rest of the inmates and save money:

The inmates also contend that CCA officials use gang violence and the threat of gang violence as an "inexpensive device to gain control over the inmate population", according to the lawsuit, and that housing gang members together allows the company to use fewer guards, reducing payroll costs.

"The complaint alleges that CCA fosters and develops criminal gangs", attorney Wyatt Johnson, who along with T.J. Angstman represents the inmates, said in a statement. "Ideally, the lawsuit should force this to come to an end."

The CCA has operated the prison in partnership with the Idaho corrections department since 2000, at the beginning of a boom period when the number of inmates detained in CCA's private prisons nationwide climbed nearly 50 percent between 2000 and 2009. States have invited private prison corporations to run some of their facilities as a cost-cutting measure, even though recent studies show that private prisons ultimately cost states millions more than public ones.

Private prisons are also experiencing a boom in the number of corruption complaints being leveled against them. In Arizona, lawmakers passed several pieces of favorable legislation after receiving more than $60,000 from industry lobbyists, in Alabama a judge likened one private facility to a "debtors prison" and in Pennsylvania a judge was sentenced to nearly three decades in prison after it was discovered he had sent hundreds of younger residents into a privately-run juvenile detention facility in exchange for millions of dollars in bribes from the owners of those detention centers.

(Adam Peck, Think Progress Justice, 11/15/12. Think Progress is a political blog that provides a forum that advances progressive ideas. It is an outlet of the Center for American Progress Action Fund, www.americanprogress.org)