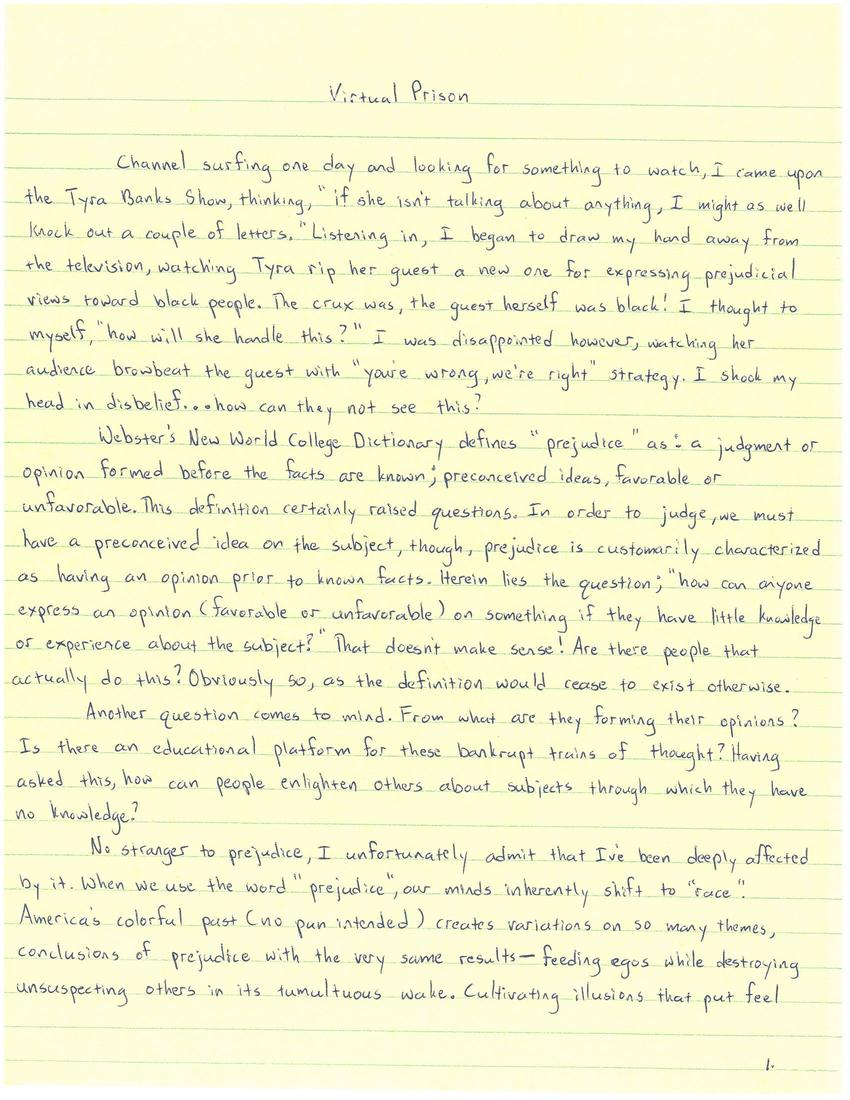 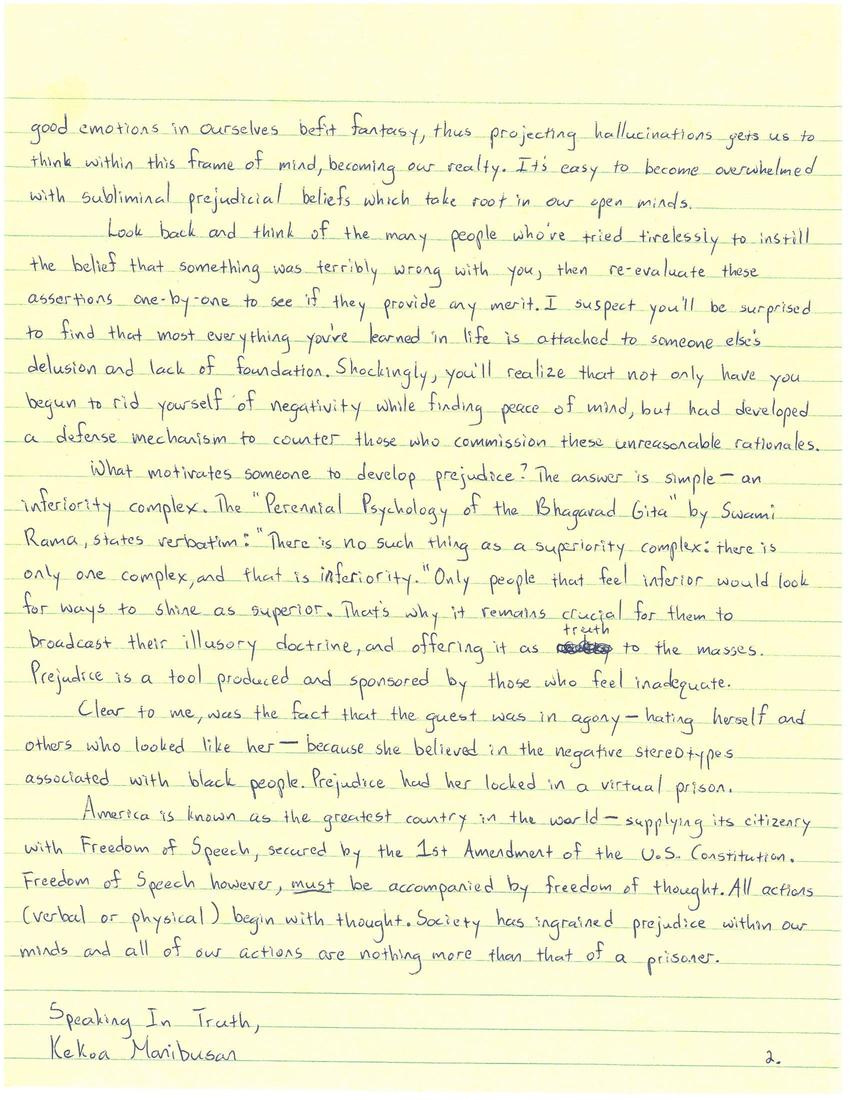 Channel surfing one day and looking for something to watch, I came upon the Tyra Banks Show, thinking, "if she isn't talking about anything, I might as well knock out a couple of letters." Listening in, I began to draw my hand away from the television, watching Tyra rip her guest a new one for expressing prejudicial views toward black people. The crux was, the guest herself was black! I thought to myself, "how will she handle this?" I was disappointed however, watching her audience browbeat the guest with "you're wrong, we're right" strategy. I shook my head in disbelief... how can they not see this?

Webster's New World College Dictionary defines "prejudice" as: a judgment or opinion formed before the facts are known; preconceived ideas, favorable or unfavorable. This definition certainly raised questions. In order to judge, we must have a preconceived idea on the subject, though, prejudice is customarily characterized as having an opinion prior to known facts. Herein lies the question; "how can anyone express an opinion (favorable or unfavorable) on something if they have little knowledge or experience about the subject?" That doesn't make sense! Are there people that actually do this? Obviously so, as the definition would cease to exist otherwise.

Another question comes to mind. From what are they forming their opinions? Is there an educational platform for these bankrupt trains of thought? Having asked this, how can people enlighten others about subjects through which they have no knowledge?

No stranger to prejudice, I unfortunately admit that I've been deeply affected by it. When we use the word "prejudice", our minds inherently shift to "race". America's colorful past (no pun intended) creates variations on so many themes, conclusions of prejudice with the very same results - feeding egos while destroying unsuspecting others in its tumultuous wake. Cultivating illusions that put feel good emotions in ourselves befit fantasy, thus projecting hallucinations gets us to think within this frame of mind, becoming our reality. It's easy to become overwhelmed with subliminal prejudicial beliefs which take root in our open minds.

Look back and think of the many people who've tried tirelessly to instill the belief that something was terribly wrong with you, then re-evaluate those assertions one-by-one to see if they provide any merit. I suspect you'll be surprised to find that most everything you've learned in life is attached to someone else's delusion and lack of foundation. Shockingly, you'll realize that not only have you begun to rid yourself of negativity while finding peace of mind, but had developed a defense mechanism to counter those who commission these unreasonable rationales.

What motivates someone to develop prejudice? The answer is simple - an inferiority complex. The "Perennial Psychology of the Bhagavad Gita" by Swami Rama, states verbatim: "There is no such thing as a superiority complex: there is only one complex, and that is inferiority." Only people that feel inferior would look for ways to shine as superior. That's why it remains crucial for them to broadcast their illusory doctrine, and offering it as truth to the masses. Prejudice is a tool produced and sponsored by those who feel inadequate.

Clear to me, was the fact that the guest was in agony - hating herself and others who looked like her - because she believed in the negative stereotypes associated with black people. Prejudice had her locked in a virtual prison.

America is known as the greatest country in the world - supplying its citizenry with Freedom of Speech, secured by the 1st Amendment of the U.S. Constitution. Freedom of Speech however, MUST be accompanied by freedom of thought. All actions (verbal or physical) begin with thought. Society has ingrained prejudice within our minds and all of our actions are nothing more than that of a prisoner.