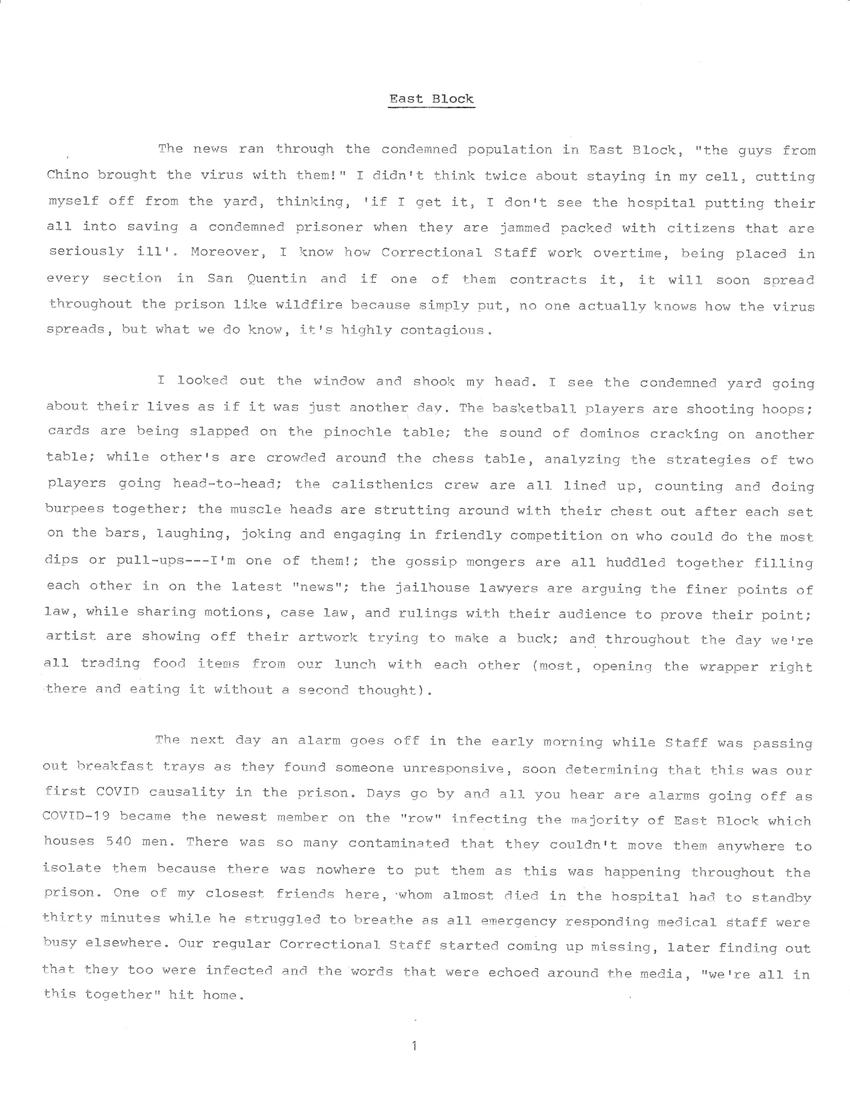 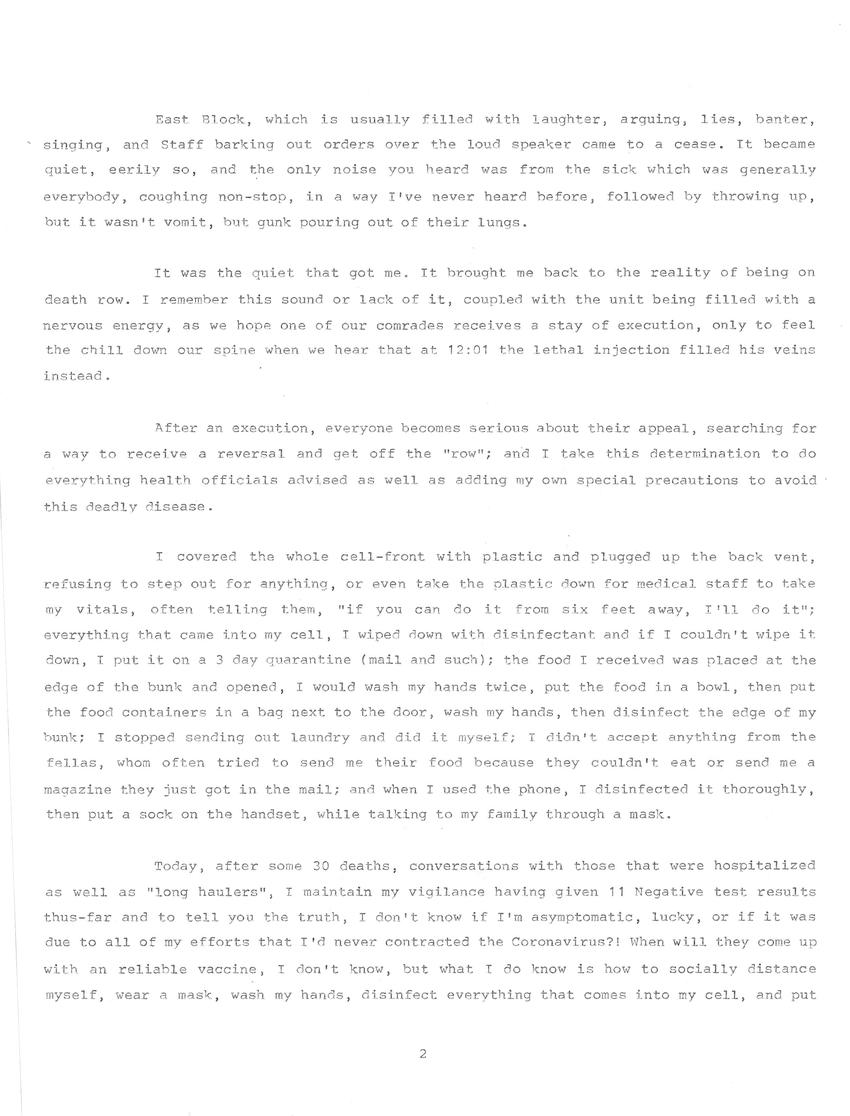 The news ran through the condemned population in East Block, "the guys from Chino brought the virus with them!" I didn't think twice about staying in my cell, cutting myself off from the yard, thinking, if I get it, I don't see the hospital putting their all into saving a condemned prisoner when they are jammed packed with citizens that are seriously ill'. Moreover, I know how Correctional Staff work overtime, being placed in every section in San Quentin and if one of them contracts it, it will soon spread throughout the prison like wildfire because simply put, no one actually knows how the virus spreads, but what we do know, it's highly contagious.

I looked out the window and shook my head. I see the condemned yard going about their lives as if it was just another day. The basketball players are shooting hoops; cards are being slapped on the pinochle table; the sound of dominos cracking on another table; while other's are crowded around the chess table, analyzing the strategies of two players going head-to-head; the calisthenics crew are all lined up, counting and doing burpees together; the muscle heads are strutting around with their chest out after each set on the bars, laughing, joking and engaging in friendly competition on who could do the most dips or pull-ups---I'm one of them!; the gossip mongers are all huddled together filling each other in on the latest "news"; the jailhouse lawyers are arguing the finer points of law, while sharing motions, case law, and rulings with their audience to prove their point; artist are showing off their artwork trying to make a buck; and throughout the day we're all trading food items from our lunch with each other (most, opening the wrapper right there and eating it without a second thought).

The next day an alarm goes off in the early morning while staff was passing out breakfast trays as they found someone unresponsive, soon determining that this was our first COVID causality in the prison. Days go by and all you hear are alarms going off as COVID-19 became the newest member on the "row" infecting the majority of East Block which houses 540 men. There was so many contaminated that they couldn't move them anywhere to isolate them because there was nowhere to put them as this was happening throughout the prison. One of my closest friends here, whom almost died in the hospital had to standby thirty minutes while he struggled to breathe as all emergency responding medical staff were busy elsewhere. Our regular Correctional Staff started coming up missing, later finding out that they too were infected and the words that were echoed around the media, "we're all in this together" hit home.

East Block, which is usually filled with laughter, arguing, lies, banter, singing, and Staff barking out orders over the loudspeaker came to a cease. It became quiet, eerily so, and the only noise you heard was from the sick which was generally everybody, coughing non-stop, in a way I've never heard before, followed by throwing up, but it wasn't vomit, but gunk pouring out of their lungs.

It was the quiet that got me. It brought me back to the reality of being on death row. I remember this sound or lack of it, coupled with the unit being filled with a nervous energy, as we hope one of our comrades receives a stay of execution, only to feel the chill down our spine when we hear that at 12:01 the lethal injection filled his veins instead.

After an execution, everyone becomes serious about their appeal, searching for a way to receive a reversal and get off the "row"; and I take this determination to do everything health officials advised as well as adding my own special precautions to avoid this deadly disease.

I covered the whole cell-front with plastic and plugged up the back vent, refusing to step out for anything, or even take the plastic down for medical staff to take my vitals, often telling them, "if you can do it from six feet away, I'll do it"; everything that came into my cell, I wiped down with disinfectant and if I couldn't wipe it down, I put it on a 3 day quarantine (mail and such); the food I received was placed at the edge of the bunk and opened, I would wash my hands twice, put the food in a bowl, then put the food containers in a bag next to the door, wash my hands, then disinfect the edge of my bunk; I stopped sending out laundry and did it myself; I didn't accept anything from the fellas, whom often tried to send me their food because they couldn't eat or send me a magazine they just got in the mail; and when I used the phone, I disinfected it thoroughly,
then put a sock on the handset, while talking to my family through a mask.

Today, after some 30 deaths, conversations with those that were hospitalized as well as "long haulers", I maintain my vigilance having given 11 Negative test results thus-far and to tell you the truth, I don't know if I'm asymptomatic, lucky, or if it was due to all of my efforts that I'd never contracted the Coronavirus?! When will they come up with an reliable vaccine, I don't know, but what I do know is how to socially distance myself, wear a mask, wash my hands, disinfect everything that comes into my cell, and put them on quarantine to avoid becoming infected in the first place.

You know, one of the questions I get asked the most is, what's it like on death row?". To be honest, I never knew what to tell them, but now I can easily say it's like the Coronavirus. Testing Positive, having to self-isolate, then experiencing the various symptoms is like living day-to-day on the "row", it's uncomfortable, lonely, and at times, downright depressing; going to the hospital and being hooked up to machines is like being moved to the Death Watch cell to prepare you for your execution, while you hope that your lawyers will win a stay from the U.S. Supreme Court, so you can live another day; and being moved to the ICU to be put into a coma, is like being strapped to the gurney with a poisoned-filled needle stuck into your arm in the Death Chamber, praying that the Governor calls, giving you a reprieve at the last minute, but deep down, you know that this is the end...