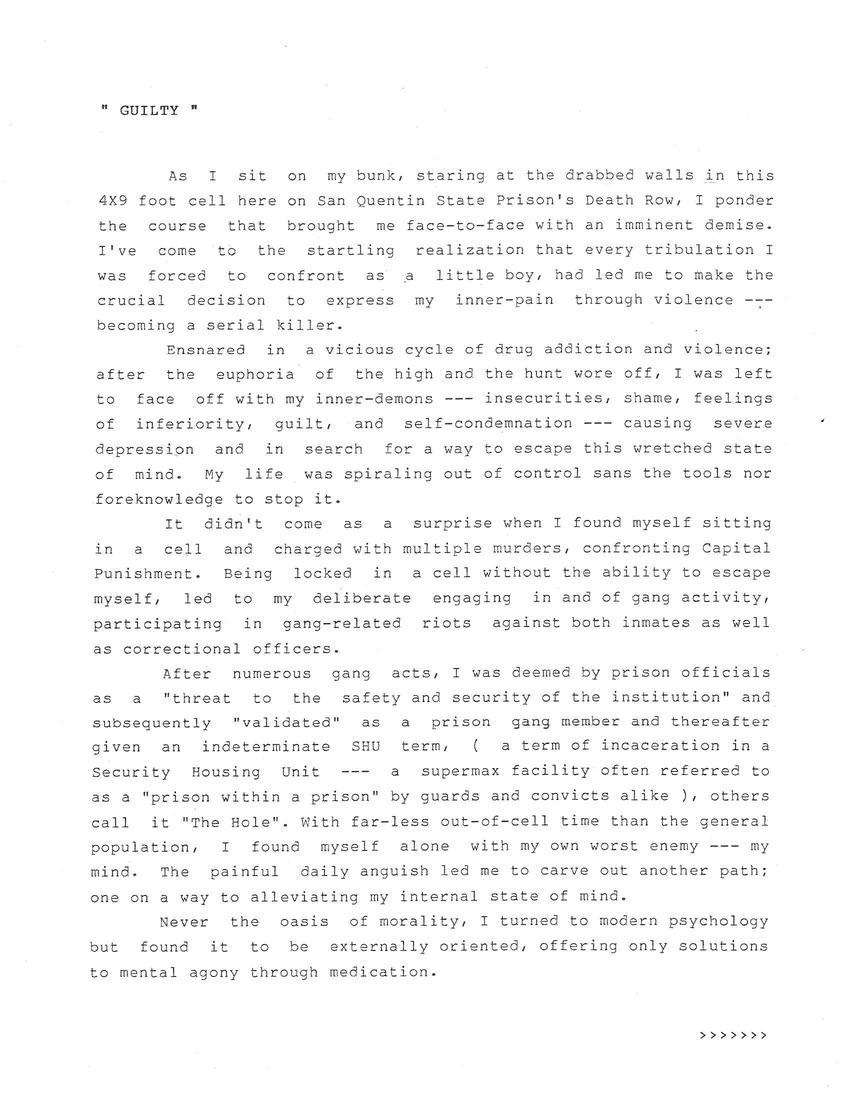 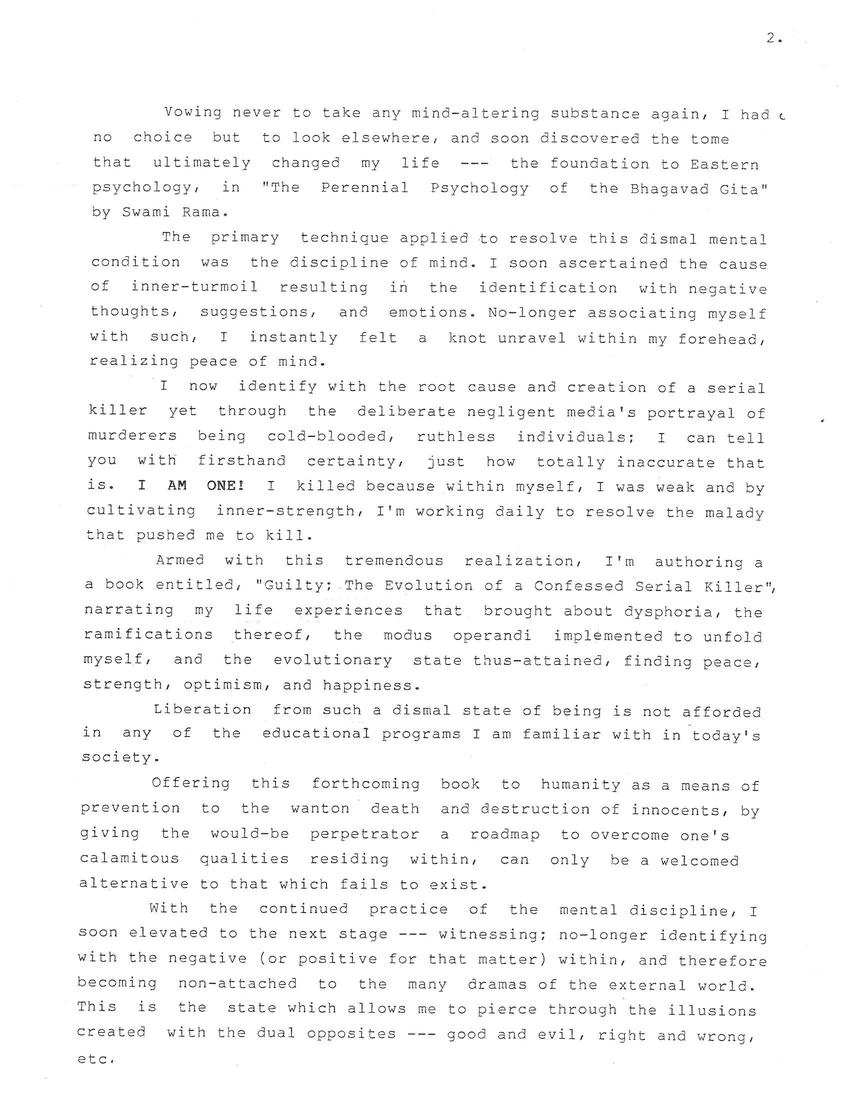 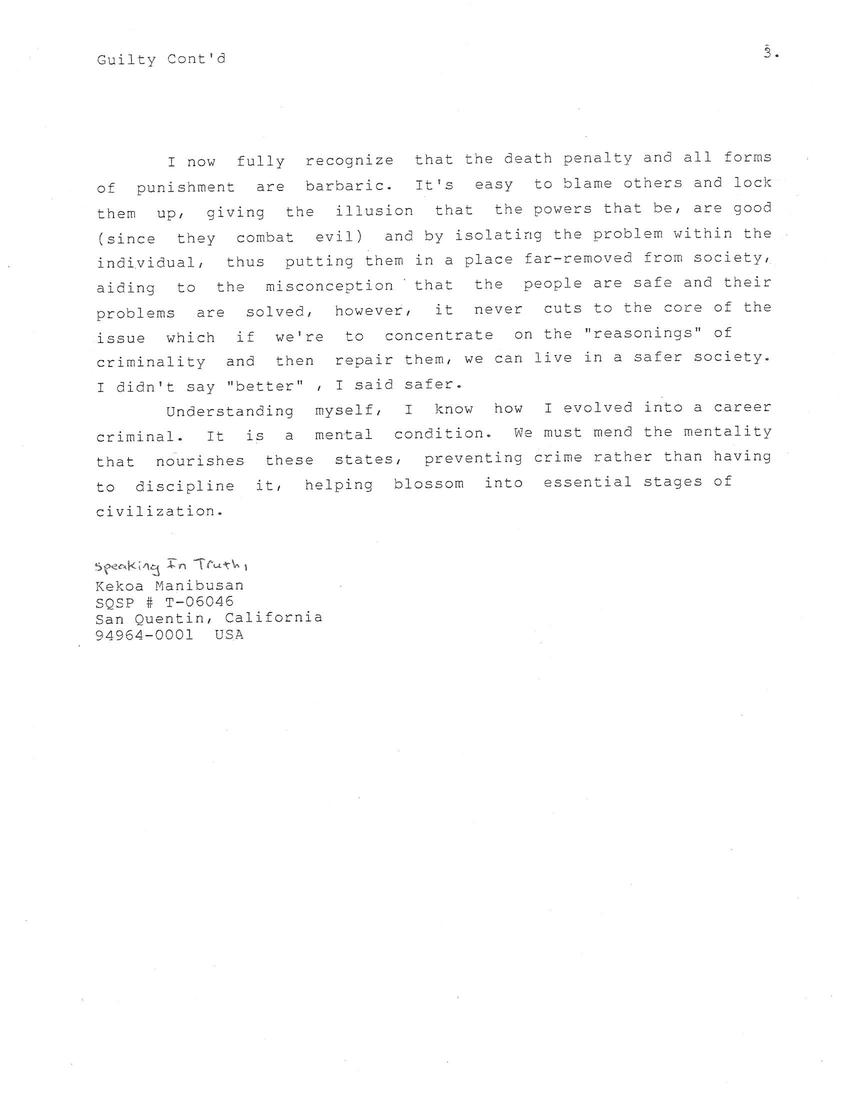 As I sit on my bunk, staring at the drabbed walls in this 4x9 foot cell here on San Quentin State Prison's Death Row, I ponder the course that brought me face-to-face with an imminent demise. I've come to the startling realization that every tribulation I was forced to confront as a little boy, had led me to make the crucial decision to express my inner-pain through violence --- becoming a serial killer.

Ensnared in a vicious cycle of drug addiction and violence; after the euphoria of the high and the hunt wore off, I was left to face off with my inner-demons --- insecurities, shame, feelings of inferiority, guilt, and self-condemnation --- causing severe depression and in search for a way to escape this wretched state of mind. My life was spiraling out of control sans the tools nor foreknowledge to stop it.

It didn't come as a surprise when I found myself sitting in a cell and charged with multiple murders, confronting Capital Punishment. Being locked in a cell without the ability to escape myself, led to my deliberate engaging in and of gang activity, participating in gang-related riots against both inmates as well as correctional officers.

After numerous gang acts, I was deemed by prison officials as a "threat to the safety and security of the institution" and subsequently "validated" as a prison gang member and thereafter given an indeterminate SHU term (a term of incarceration in a Security Housing Unit --- a supermax facility often referred to as a "prison within a prison" by guards and convicts alike), others call it "The Hole". With far less out-of-cell time than the general population, I found myself alone with my own worst enemy --- my mind. The painful daily anguish led me to carve out another path; one on a way to alleviating my internal state of mind.

Never the oasis of morality, I turned to modern psychology but found it to be externally oriented, offering only solutions to mental agony through medication.

Vowing never to take any mind-altering substance again, I had no choice but to look elsewhere, and soon discovered the tome that ultimately changed my life --- the foundation to Eastern psychology, in "The Perennial Psychology of the Bhagavad Gita" by Swami Rama.

The primary technique applied to resolve this dismal mental condition was the discipline of mind. I soon ascertained the cause of inner-turmoil resulting in the identification with negative thoughts, suggestions, and emotions. No longer associating myself with such, I instantly felt a knot unravel within my forehead, realizing peace of mind.

I now identify with the root cause and creation of a serial killer yet through the deliberate negligent media's portrayal of murderers being cold-blooded, ruthless individuals; I can tell you with firsthand certainty, just how totally inaccurate that is. I AM ONE! I killed because within myself, I was weak and by cultivating inner-strength, I'm working daily to resolve the malady that pushed me to kill.

Armed with this tremendous realization, I'm authoring a book entitled, "Guilty: The Evolution of a Confessed Serial Killer", narrating my life experiences that brought about dysphoria, the ramifications thereof, the modus operandi implemented to unfold myself, and the evolutionary state thus-attained, finding peace, strength, optimism, and happiness.

Liberation from such a dismal state of being is not afforded in any of the educational programs I am familiar with in today's society.

Offering this forthcoming book to humanity as a means of prevention to the wanton death and destruction of innocents, by giving the would-be perpetrator a roadmap to overcome one's calamitous qualities residing within, can only be a welcomed alternative to that which fails to exist.

With the continued practice of the mental discipline, I soon elevated to the next stage --- witnessing; no-longer identifying with the negative (or positive for that matter) within, and therefore becoming non-attached to the many dramas of the external world. This is the state which allows me to pierce through the illusions created with the dual opposites --- good and evil, right and wrong, etc.

I now fully recognize that the death penalty and all forms of punishment are barbaric. It's easy to blame others and lock them up, giving the illusion that the powers that be, are good (since they combat evil) and by isolating the problem within the individual, thus putting them in a place far-removed from society, aiding to the misconception that the people are safe and their problems are solved, however, it never cuts to the core of the issue which if we're to concentrate on the "reasonings" of criminality and then repair them, we can live in a safer society. I didn't say "better", I said safer.

Understanding myself, I know how I evolved into a career criminal. It is a mental condition. We must mend the mentality that nourishes these states, preventing crime rather than having to discipline it, helping blossom into essential stages of civilization.