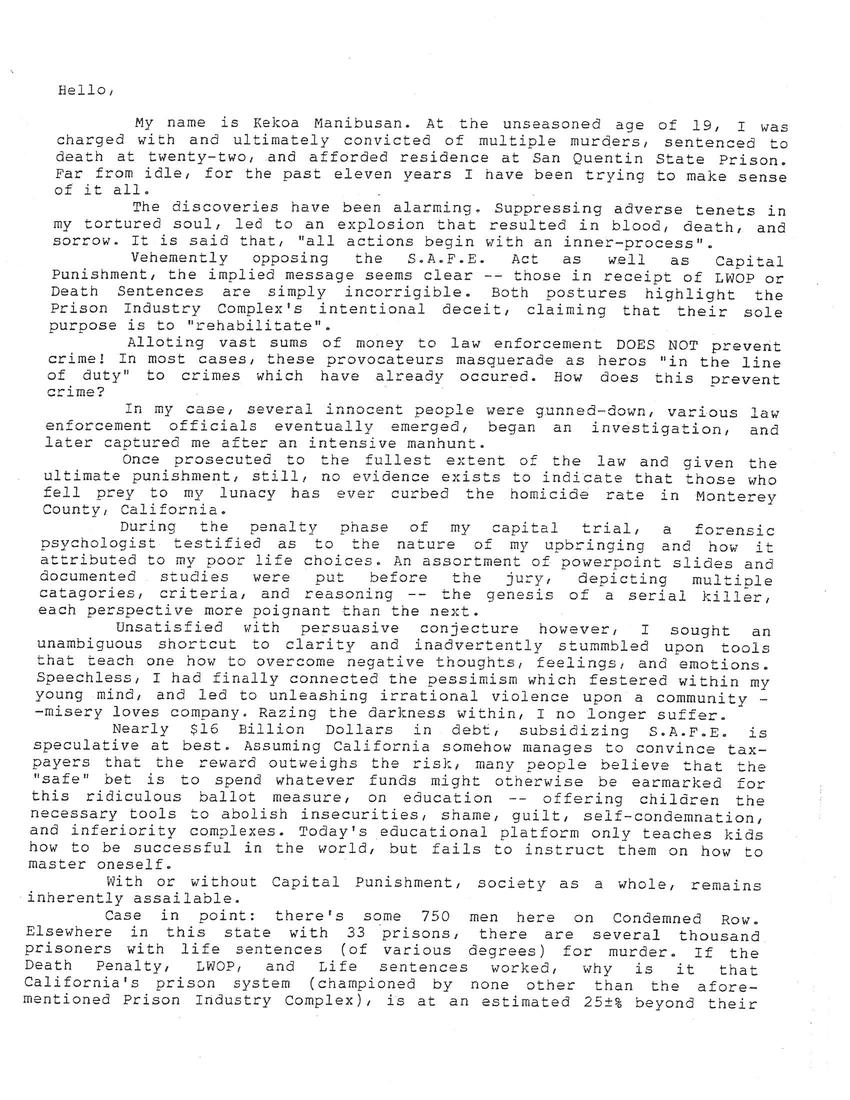 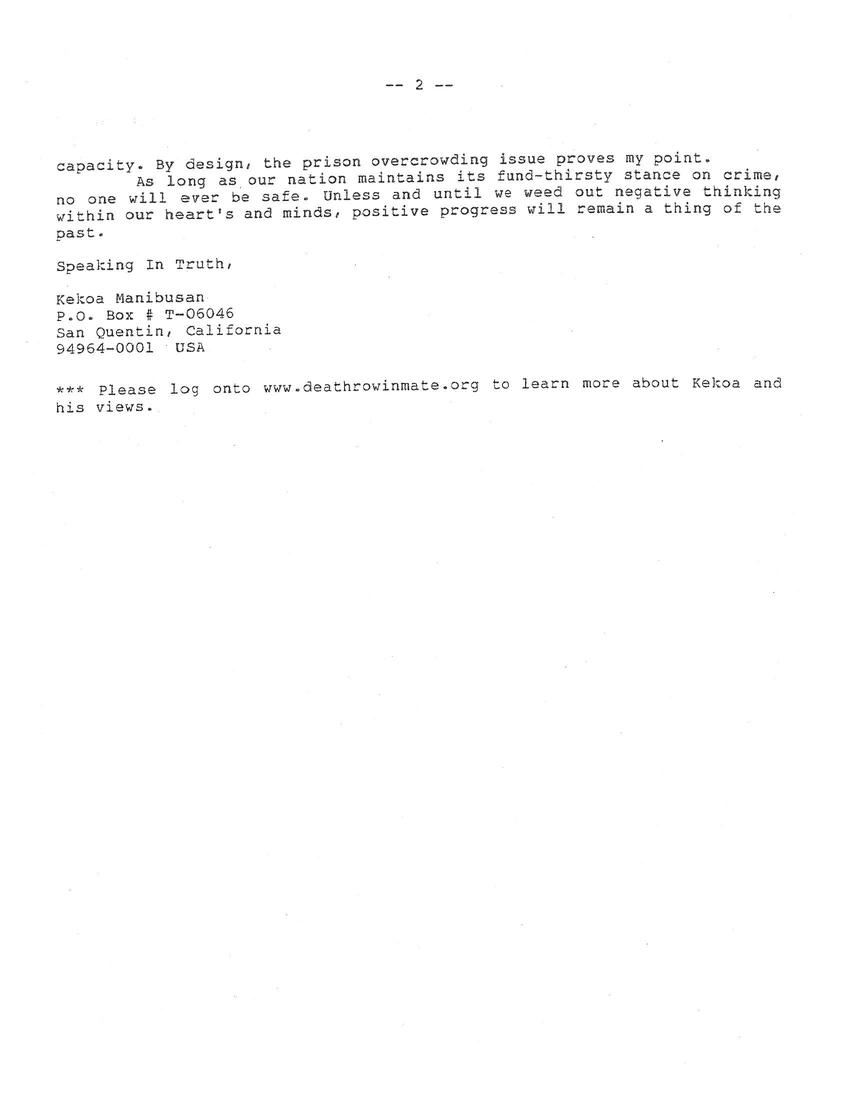 My name is Kekoa Manibusan. At the unseasoned age of 19, I was charged with and ultimately convicted of multiple murders, sentenced to death at twenty-two, and afforded residence of San Quentin State Prison. Far from idle, for the past eleven years I have been tying to make sense of it all.

The discoveries have been alarming. Suppressing adverse tenets in my tortured soul, let to an explosion that resulted in blood, death, and sorrow. It is said that, "all actions begin with an inner process".

Vehemently opposing the SAFE Act as well as capital punishment, the implied message seems clear - those in receipt of LWOP or death sentences are simply incorrigible. Both postures highlight the prison industry complex's international deceit, claiming that their sole purpose is to "rehabilitate".

Allotting vast sums of money to law enforcement DOES NOT prevent crime! In most cases, these provocatures masquerade as heroes "in the line of duty" to crimes which have already occurred. How does this prevent crime?

In my case, several innocent people were gunned down, various law enforcement officials eventually emerged, began an investigation, and later captured me after an intensive manhunt.

Once prosecuted to the fullest extent of the law and given the ultimate punishment, still, no evidence exists to indicate that those who fell prey to my lunacy has ever curbed the homicide rare in Monterey County, California.

During the penalty phase of my capital trial, a forensic psychologist testified as to the nature of my upbringing and how it attributed to my poor life choices. An assortment of Powerpoint slides and documented studies were put before the jury, depicting multiple categories, criteria and reasoning - the genesis of a serial killer, each perspective more poignant than the next.

Unsatisfied with persuasive conjecture however, I sought an unambiguous shortcut to clarity and inadvertently stumbled upon tools that teach one how to overcome negative thoughts, feelings and emotions. Speechless, I had finally connected the pessimism which festered within my young mind, and let to unleashing irrational violence upon a community - misery loves company. Razing the darkness within, I no longer suffer.

Nearly $16 billion dollars in debt, subsidizing SAFE is speculative at best. Assuming California somehow manages to convince tax-payers that the reward outweighs the risk, many people believe that the safe bet is to spend whatever funds might otherwise be earmarked for this ridiculous ballot measure, on education - offering children the necessary tools to abolish insecurities, shame, guilt, self-codemnation, and inferiority complexes. Today's educational platform only teaches kids how to be successful in the world, but fails to instruct them on how to master oneself.

With or without capital punishment, society as a whole remains inherently assailable.

Case in point: there's some 750 men here on Condemned Row. Elsewhere in this state with 33 prisons, there are several thousand prisoners with life sentences (of various degrees) for murder. If the death penalty, LWOP and life sentences worked, why is it that California's prison system (championed by none other than the aforementioned Prison Industry Complex) is at an estimated 25+% beyond their capacity. By design, the prison overcrowding issue proves my point.

As long as our nation maintains its fund-thirsty stance on crime no one will ever be safe. Unless and until we weed out negative thinking within our hearts and minds, positive progress will remain a thing of the past.

+++Please log onto www.deathrowinmate.org to learn more about Kekoa and his views.