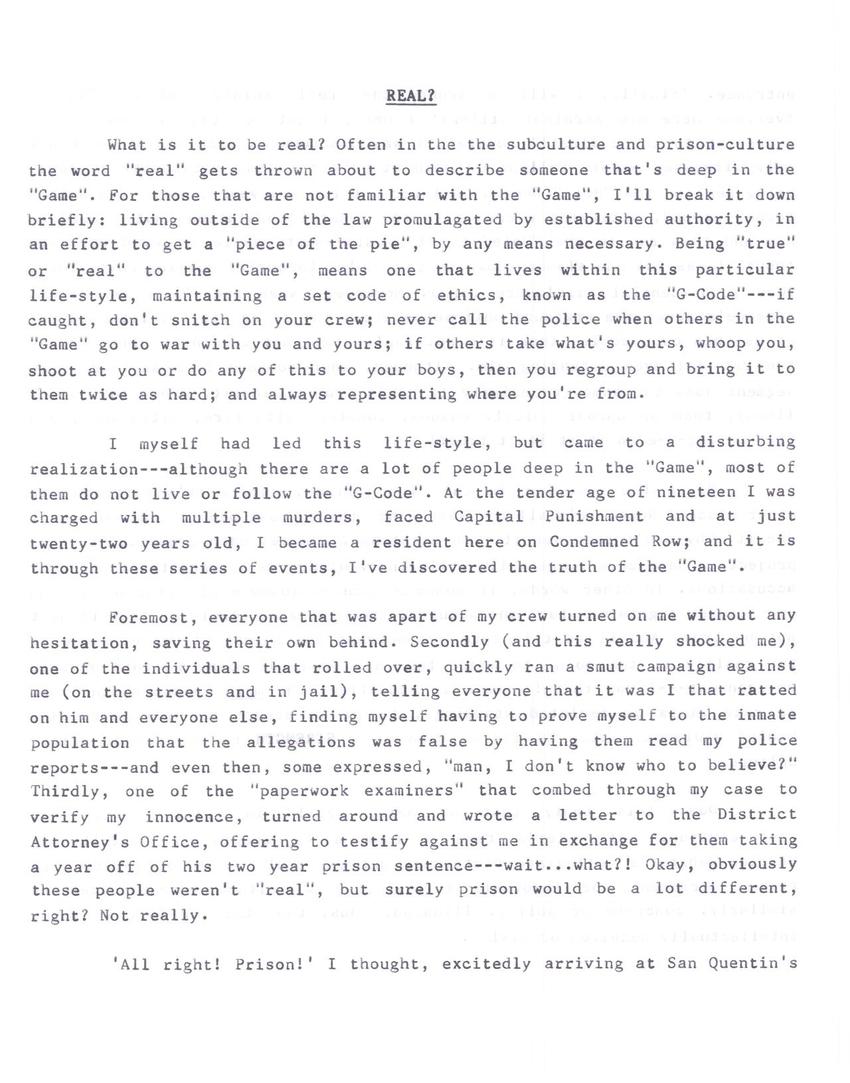 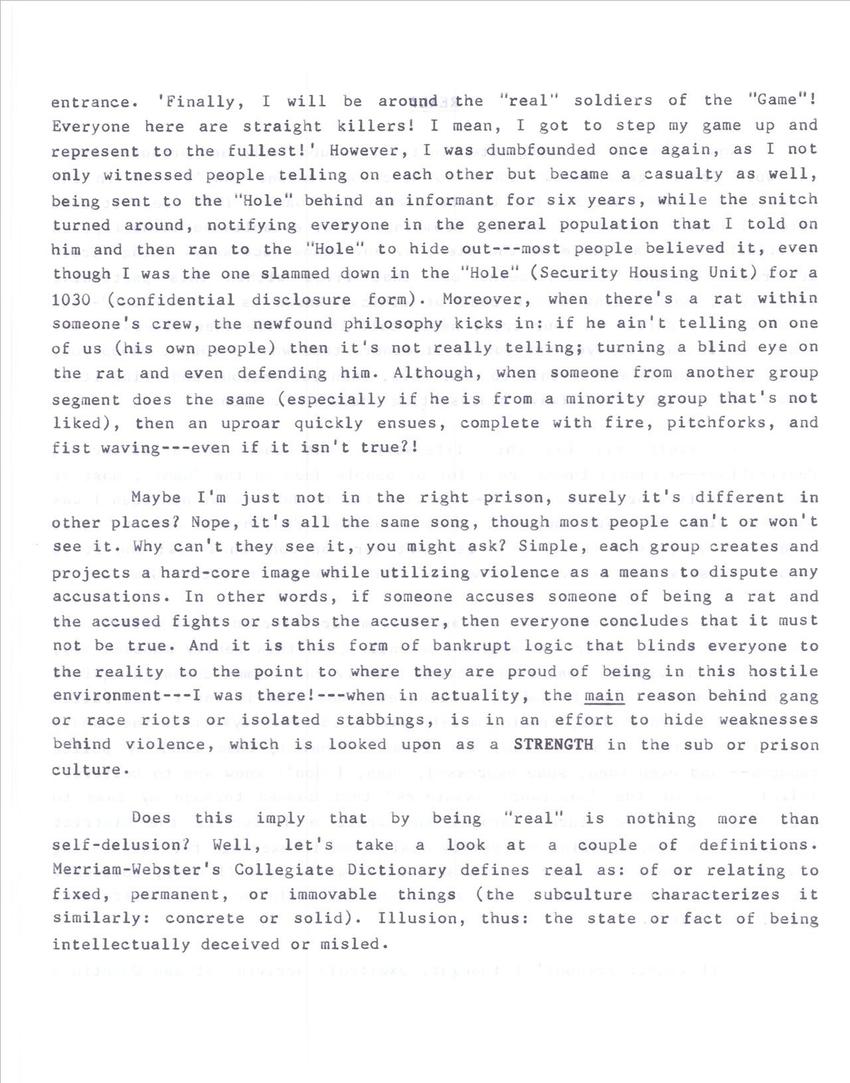 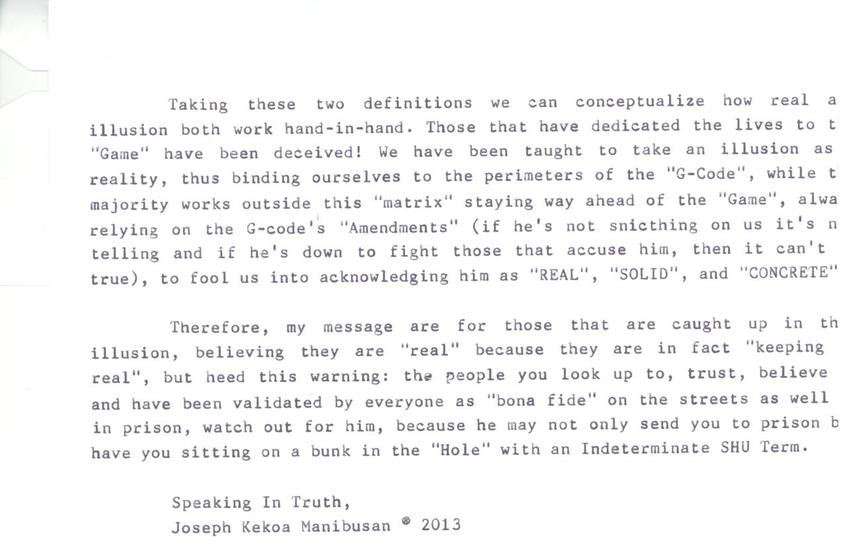 What is it to "be real"? Often in the subculture and prison culture, the word "real" gets thrown about to describe someone who's deep in "the game".

For those of you who are not familiar with "the game", I'll break it down briefly: living outside of the law promulgated by established authority in an effort to get a "piece of the pie" by any means necessary. Being "true" or "real" to "the game" means that one lives within this particular lifestyle, maintaining a set code of ethics, known as the "G-Code": if caught, don't snitch on your crew; never call the police when others in "the game" go to war with you and yours; if others take what's yours, whoop you, shoot at you, or do any of this to your boys, then you regroup and bring it to them twice as hard; and always representing where you're from.

I myself had led this lifestyle but came to a disturbing realization—although there are a lot of people deep in "the game" most of them do not live or follow the G-Code. At the tender age of nineteen, I was charged with multiple murders, faced capital punishment, and, at just twenty-two years old, I became a resident here on condemned row. And it is through these series of events that I've discovered the truth about "the game".

Foremost, everyone that was a part of my crew turned on me without any hesitation, saving their own behind. Secondly (and this really shocked me), one of the individuals whom rolled over quickly ran a smut campaign against me on the streets and in jail, telling everyone that I was the one who ratted on him and everyone else, finding myself having to prove myself to the inmate populations that the allegations were false, having them read my police reports. And even then, some expressed, "Man, I don't know who to believe." Thirdly, one of the paperwork examiners who combed through my case to verify my innocence turned around and wrote a letter to the District Attorney's office, offering to testify against me in exchange for them taking a year off of his two-year prison sentence. Wait, what!?

Okay, obviously these people weren't "real", but surely prison would be a lot different, right? Not really.

"All right! Prison!" I thought, excitedly arriving at San Quentin's entrance. "Finally, I will be around the 'real' soldiers of 'the game'! Everyone here are straight killers! I mean, I got to step my game up and represent to the fullest!"

However, I was dumbfounded once again, as I not only witnessed people telling on each other but became a casualty as well, being sent to the Hole (Security Housing Unit) behind an informant for six years while the snitch turned around and notified everyone in the general population that I told on him and then ran to the Hole to hide out. Most people believed it, even though I was the one slammed down in the Hole for a 1030 (confidential disclosure form).

Moreover, when there's a rat within someone's crew, the newfound philosophy kicks in. If he ain't telling on one of us (his own people), then it's not really telling, turning a blind eye on the rat and even defending him. Although, when someone from another group segment does the same—especially if he is from a minority group that's not liked—then an uproar quickly ensues, complete with fire, pitchforks, and fist waving—even if it's not true!

Maybe I'm just not in the right prison. Surely, it's different in other places? Nope, it's all the same song, though most people can't or won't see it. Why can't they see it, you might ask? Simple: each group creates and projects a hardcore image while utilizing violence as a means to dispute any accusations. In other words, if someone accuses someone of being a rat and the accused fights or stabs the accuser, then everyone concludes that it must not be true.

And it is this form of bankrupt logic that blinds everyone to reality, to the point to where they are proud of being in this hostile environment. I was there! When in actuality, the main reason behind gang or race riots or isolated stabbings is an effort to hide weaknesses behind violence, which is looked upon as a STRENGTH in the sub or prison culture.

Does this imply that being "real" is nothing more than self-delusion? Well, let's take a look at a couple of definitions.

Merriam-Webster's Collegiate Dictionary defines "real" as: of or relating to fixed, permanent, or immovable things (the subculture characterizes it similarly: concrete or solid). Illusion, thus: the state or fact of being intellectually deceived or misled.

Taking those two definitions as we can see how "real" and illusion work hand-in-hand. Those who have dedicated their lives to "the game" have been deceived! We have been taught to take an illusion as reality, thus blinding ourselves to the perimeters of the G-Code, while the majority works outside this matrix, staying way ahead of "the game", always relying on the G-Code's amendments. If he's not snitching on us, it's not telling. If he's down to fight those who accuse him, then it can't be true. They use it to fool us into acknowledging him as "real", "solid, and "concrete"!

Therefore, my message is for those who are caught up in the illusion, believing that they are "real" because they are "keeping real". But heed this warning: the people you look up to, trust, believe, and have been validated by everyone as "bona fide" on the streets and in prison—watch out for him. Because he may not only send you to prison, but have you sitting on a bunk in the Hole with an indeterminate SHU team.

Dear Kekoa,
thank you for your "real" story. I hope with the indeterminate SHU Term you are not refering to yourself? Take care, Julia
Hello Joseph, this is your auntie Bella, I hope you are doing as well to be expected. Johnathon and Jolene say to tell you hello and hang in there sweetie. Write me,

I think you said these rules very well keep it up. Love you.