How I Stole My Years 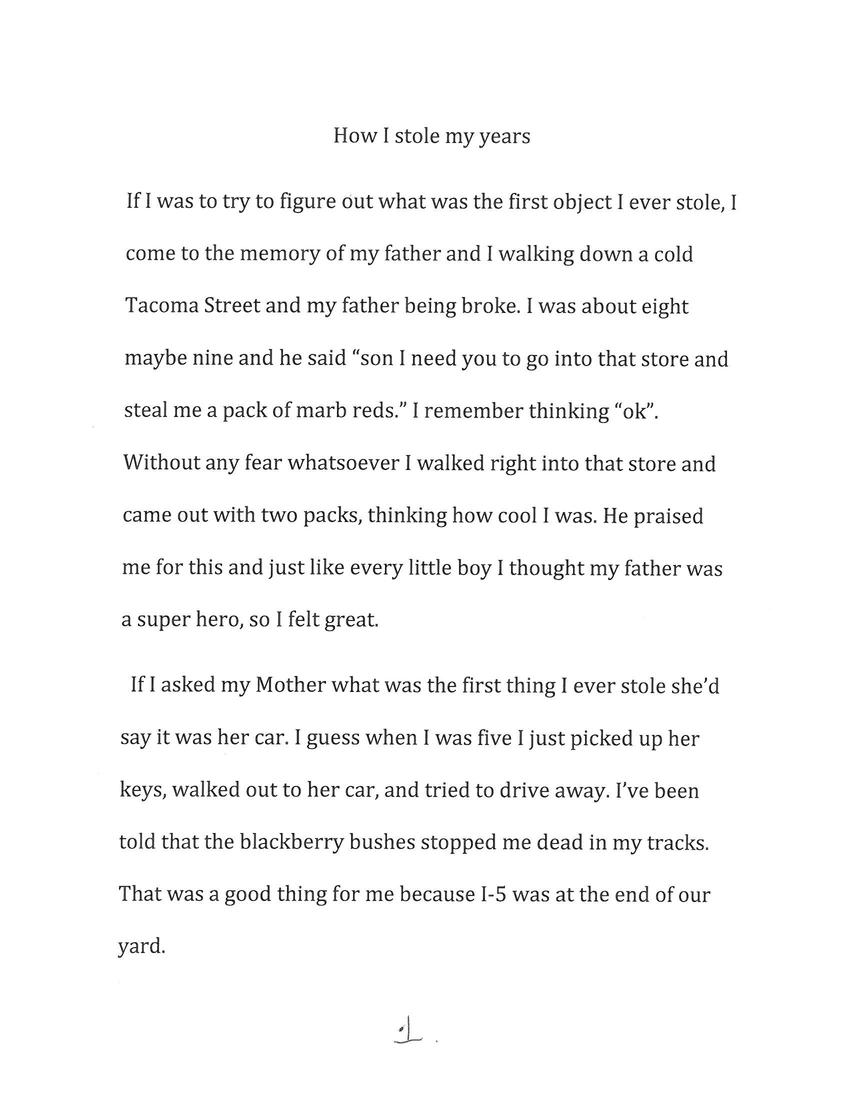 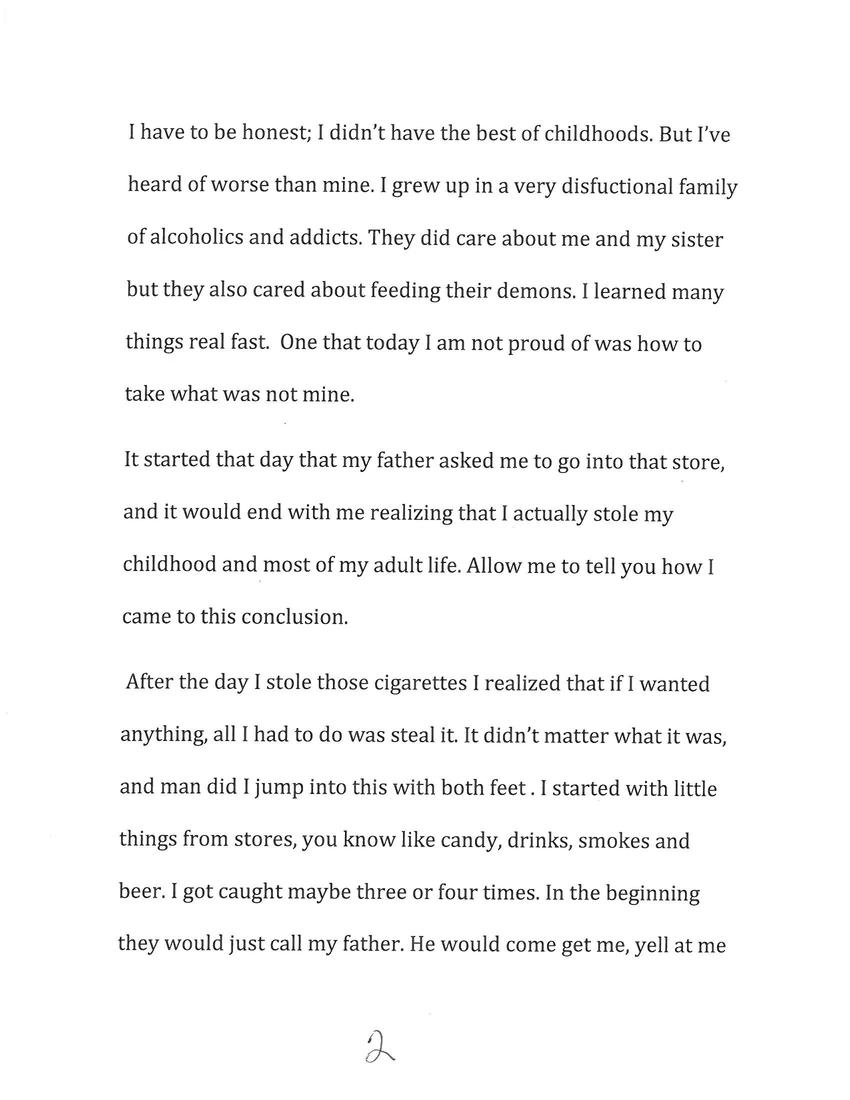 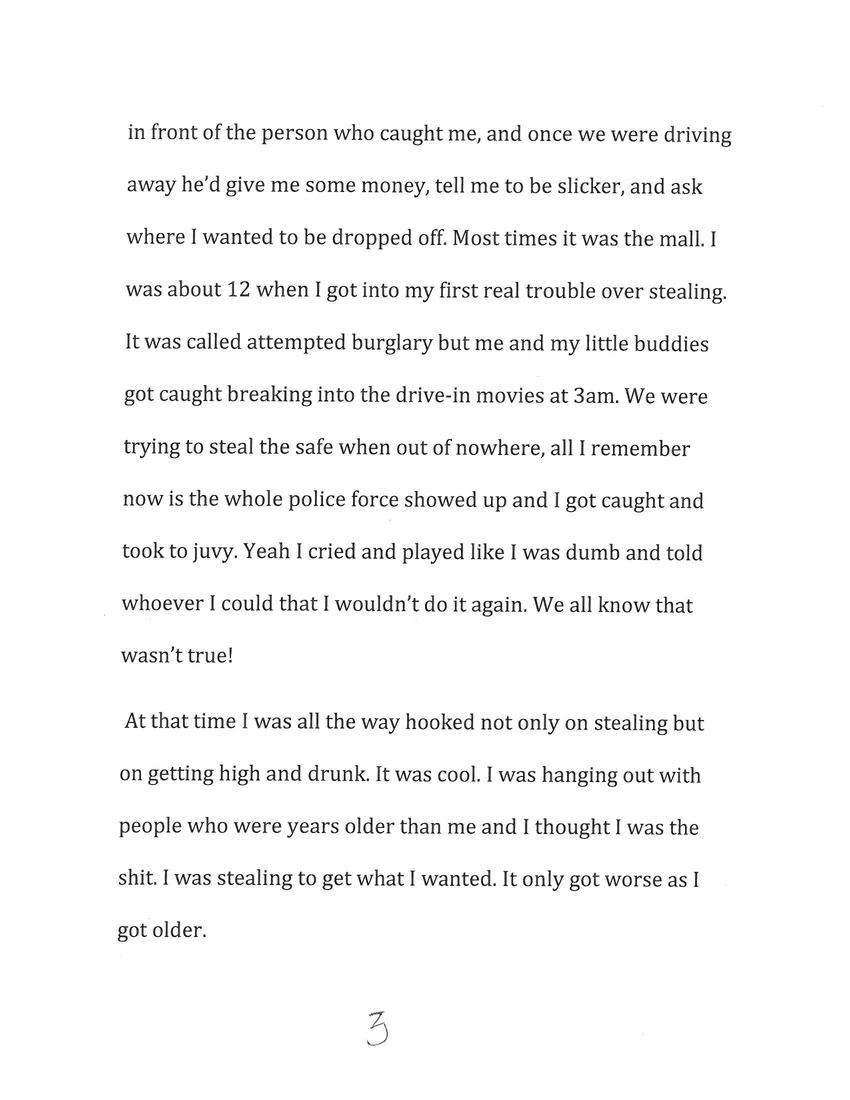 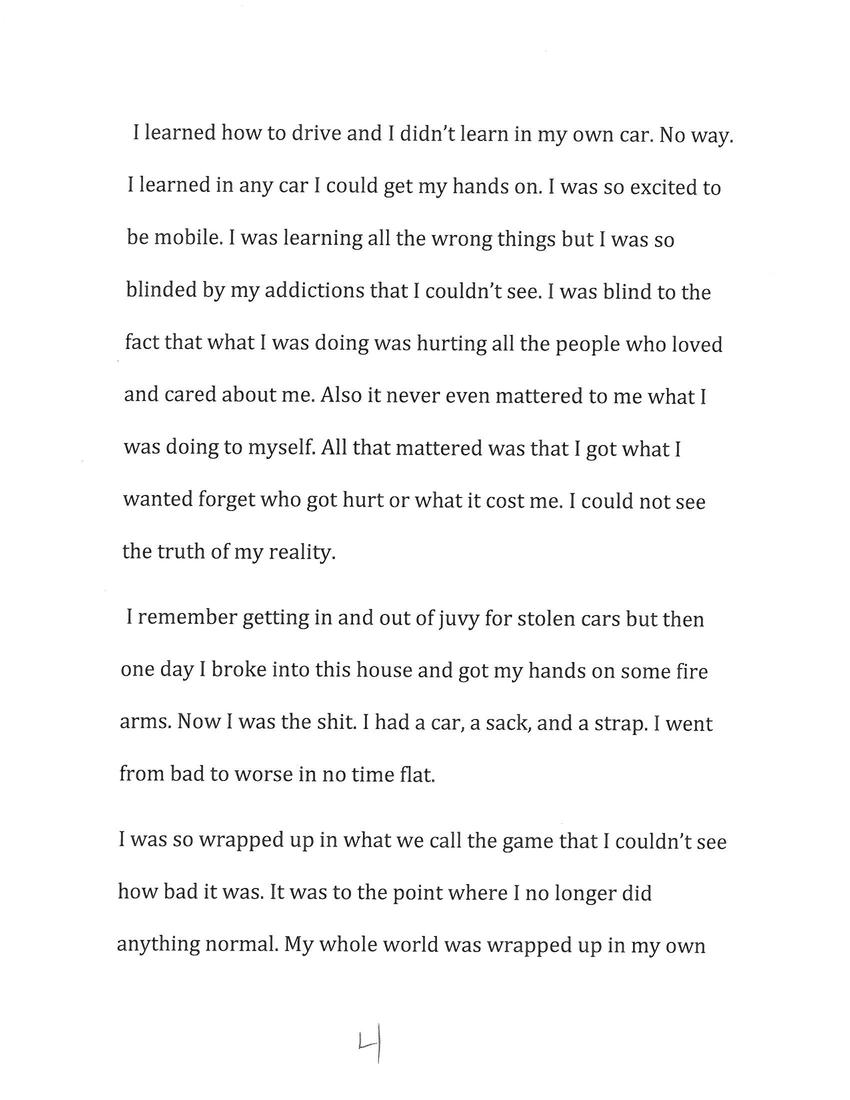 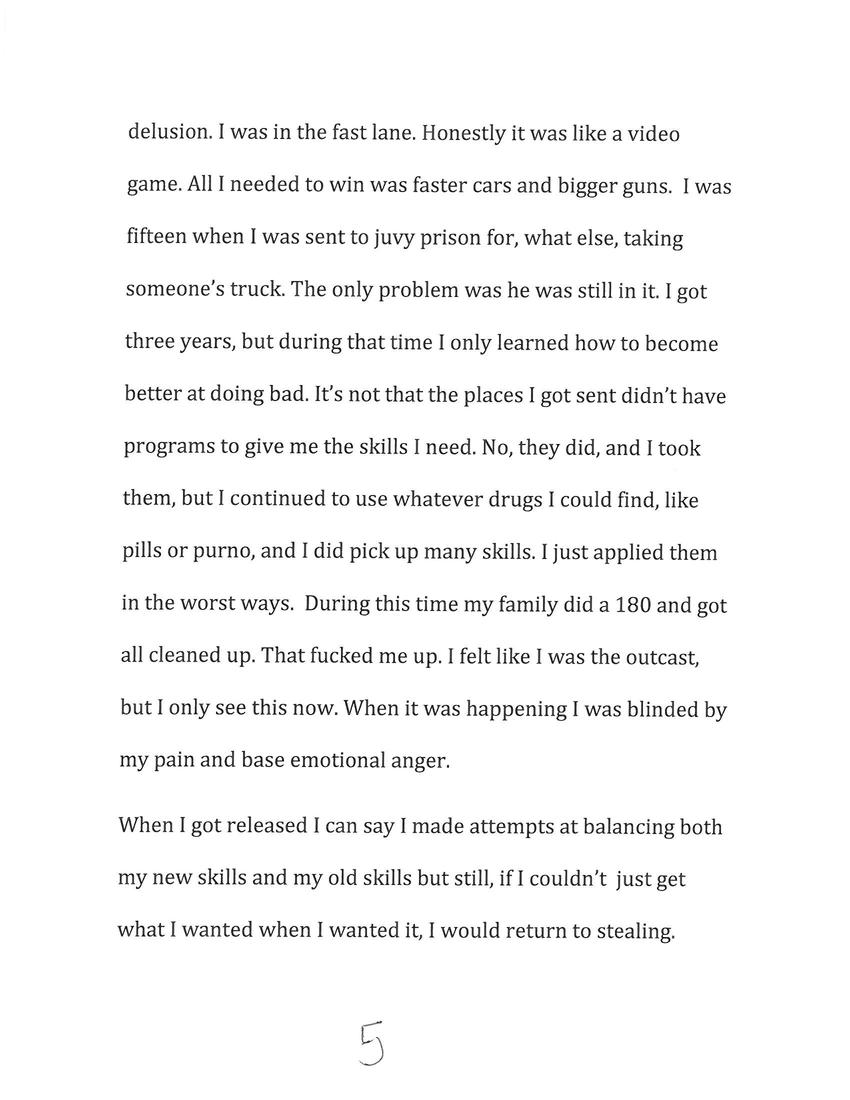 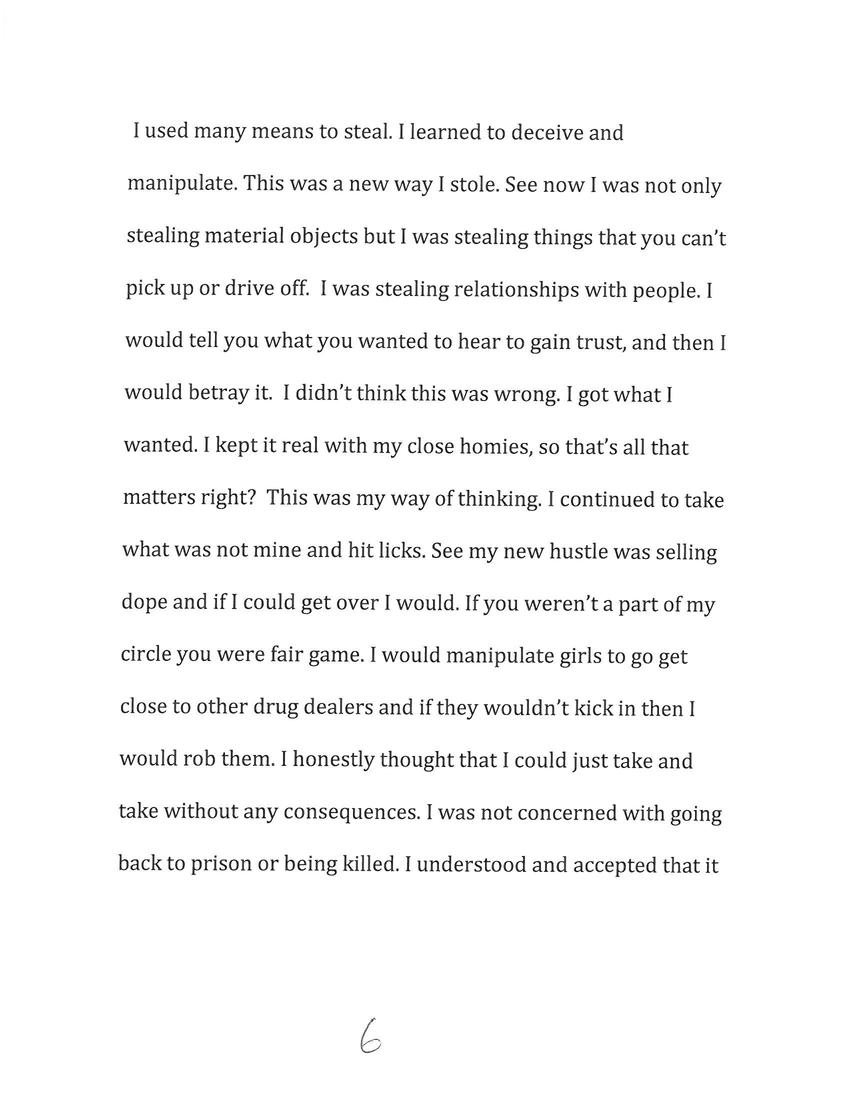 How I stole my years

If I was to try to figure out what was the first object I ever stole, I come to the memory of my father and I walking down a cold Tacoma Street and my father being broke. I was about eight maybe nine and he said "son I need you to go into that store and steal me a pack of marb reds." I remember thinking "ok". Without any fear whatsoever I walked right into that store and came out with two packs, thinking how cool I was. He praised me for this and just like every little boy I thought my father was a super hero, so I felt great.

If I asked my Mother what was the first thing I ever stole she'd say it was her car. I guess when I was five I just picked up her keys, walked out to her car, and tried to drive away. I've been told that the blackberry bushes stopped me dead in my tracks. That was a good thing for me because I-5 was at the end of our yard.

I have to be honest; I didn't have the best of childhoods. But I've heard of worse than mine. I grew up in a very dysfunctional family of alcoholics and addicts. They did care about me and my sister but they also cared about feeding their demons. I learned many things real fast. One that today I am not proud of was how to take what was not mine.

It started that day that my father asked me to go into that store, and it would end with me realizing that I actually stole my childhood and most of my adult life. Allow me to tell you how I came to this conclusion.

After the day I stole those cigarettes I realized that if I wanted anything, all I had to do was steal it. It didn't matter what it was, and man did I jump into this with both feet. I started with little things from stores, you know like candy, drinks, smokes and beer. I got caught maybe three or four times. In the beginning they would just call my father. He would come get me, yell at me in front of the person who caught me, and once we were driving away he'd give me some money, tell me to be slicker, and ask where I wanted to be dropped off. Most times it was the mall. I was about 12 when I got into my first real trouble over stealing. It was called attempted burglary but me and my little buddies got caught breaking into the drive-in movies at 3am. We were trying to steal the safe when out of nowhere, all I remember now is the whole police force showed up and I got caught and took to juvy. Yeah I cried and played like I was dumb and told whoever I could that I wouldn't do it again. We all know that wasn't true!

At that time I was all the way hooked not only on stealing but on getting high and drunk. It was cool. I was hanging out with people who were years older than me and I thought I was the shit. I was stealing to get what I wanted. It only got worse as I got older.

I learned how to drive and I didn't learn in my own car. No way. I learned in any car I could get my hands on. I was so excited to be mobile. I was learning all the wrong things but I was so blinded by my addictions that I couldn't see. I was blind to the fact that what I was doing was hurting all the people who loved and cared about me. Also it never even mattered to me what I was doing to myself. All that mattered was that I got what I wanted forget who got hurt or what it cost me. I could not see the truth of my reality.

I remember getting in and out of juvy for stolen cars but then one day I broke into this house and got my hands on some fire arms. Now I was the shit. I had a car, a sack, and a strap. I went from bad to worse in no time flat.

I was so wrapped up in what we call the game that I couldn't see how bad it was. It was to the point where I no longer did anything normal. My whole world was wrapped up in my own delusion. I was in the fast lane. Honestly it was like a video game. All I needed to win was faster cars and bigger guns. I was fifteen when I was sent to juvy prison for, what else, taking someone's truck. The only problem was he was still in it. I got three years, but during that time I only learned how to become better at doing bad. It's not that the places I got sent didn't have programs to give me the skills I need. No, they did, and I took them, but I continued to use whatever drugs I could find, like pills or purno, and I did pick up many skills. I just applied them in the worst ways. During this time my family did a 180 and got all cleaned up. That fucked me up. I felt like I was the outcast, but I only see this now. When it was happening I was blinded by my pain and base emotional anger.

When I got released I can say I made attempts at balancing both my new skills and my old skills but still, if I couldn't just get what I wanted when I wanted it, I would return to stealing. I used many means to steal. I learned to deceive and manipulate. This was a new way I stole. See now I was not only stealing material objects but I was stealing things that you can't pick up or drive off. I was stealing relationships with people. I would tell you what you wanted to hear to gain trust, and then I would betray it. I didn't think this was wrong. I got what I wanted. I kept it real with my close homies, so that's all that matters right? This was my way of thinking. I continued to take what was not mine and hit licks. See my new hustle was selling dope and if I could get over I would. If you weren't a part of my circle you were fair game. I would manipulate girls to go get close to other drug dealers and if they wouldn't kick in then I would rob them. I honestly thought that I could just take and take without any consequences. I was not concerned with going back to prison or being killed. I understood and accepted that it was a part of the game. I had lost many close friends by this time either to drugs or being on the wrong side of a bad hand.

I remember like it was yesterday when I lost. See this entire story is real. I am sitting in prison right now currently doing 60 plus years over the game. It never even occurred to me that I'd lose all this time. I stole it from myself. I could've stopped and used the skills I had to do good, or applied myself to a different road that would lead me to another place, but I was so wrapped up in my own demons and addictions that I couldn't see that I was really just stealing from myself. Today I look back and think what I could have done different, the life I could have changed for good, and the people I could have pushed away from playing this game so they never had to lose. I don't steal today or take by manipulation. I work at giving back and motivating others to not have to go down this road. I realize that we all will be dealt losing hands and winning hands. What we must learn is when to fold the losers and play the winners. Like my godmother Rose always tells me "Success only happens when preparation meets opportunity". I hope that you can stay prepared for your opportunities when they come. No matter where you are in life or how deep you are in the game it's still a choice. You can get off that dead end street and get off the highway of life that leads to a better place. It won't be easy or happen overnight. The truth is it will be harder than hell but at least you know it doesn't have to end with your death or a long life in prison.

Your paper it had me so intrigued. I felt what you had said so deep inside my mind I pictured and felt it truly I did. Thank you....
(scanned reply – view as blog post)
uploaded Nov. 30, 2013.  Original (PDF) 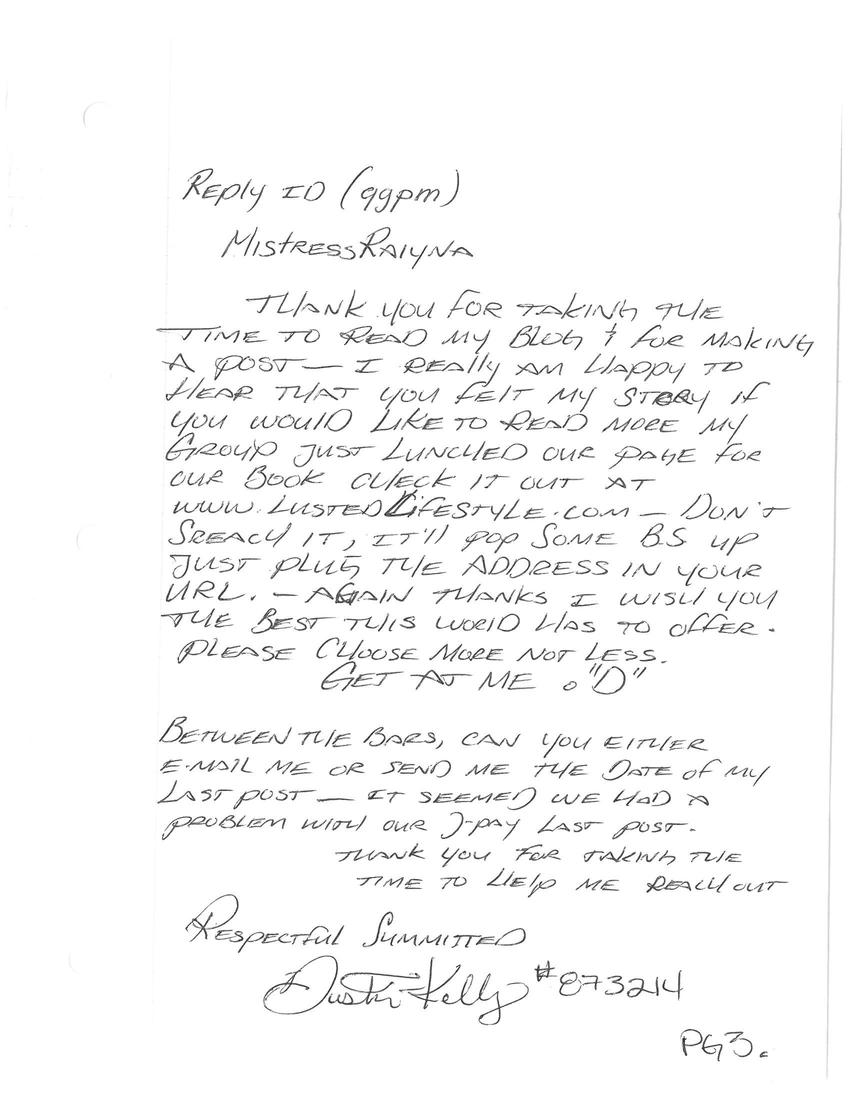 Your welcome. Sorry it took so long to write you back I didn’t even know that you had written me on here. I hope all is well with you keep your head up cause sunny days will lighten up your way.