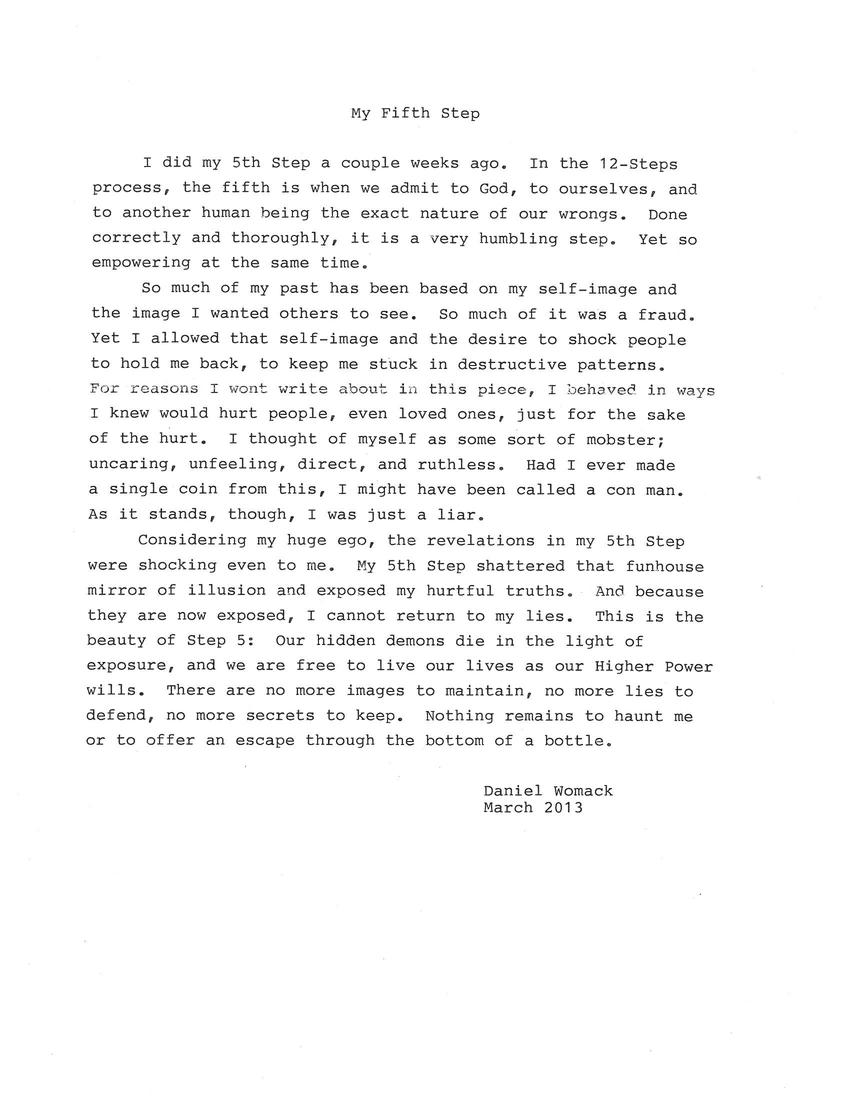 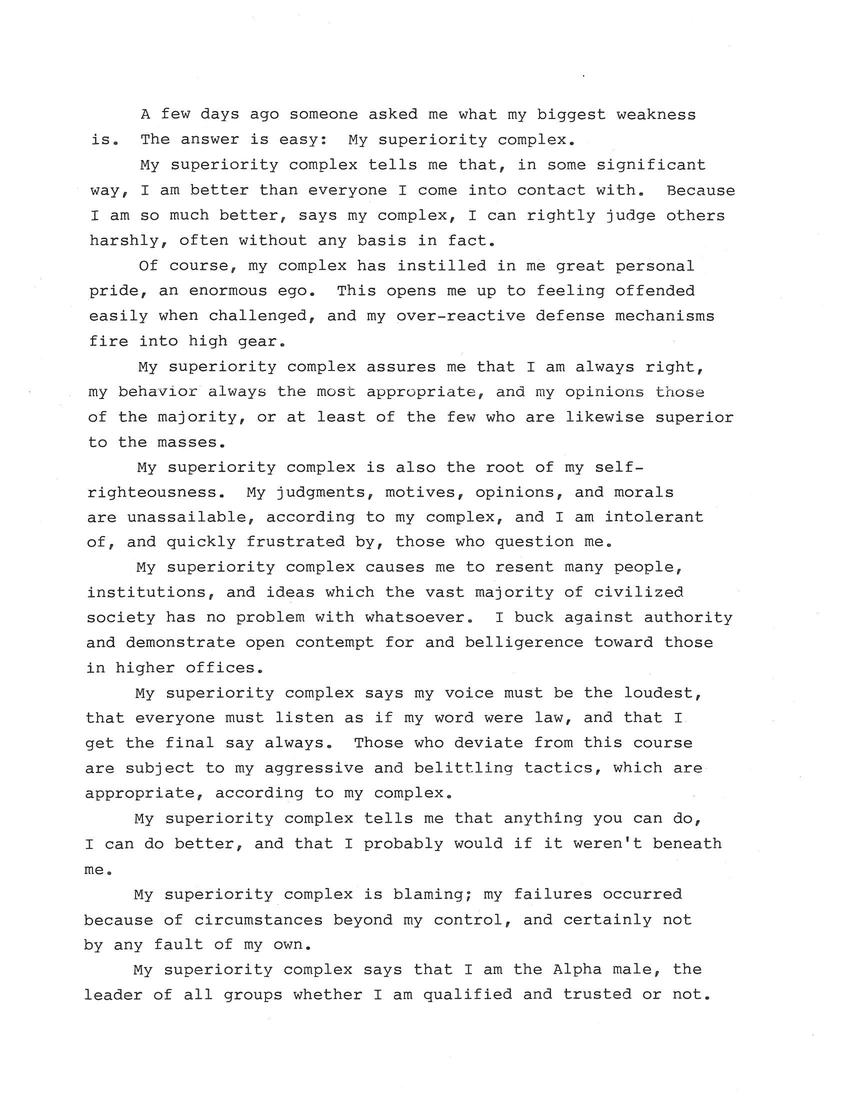 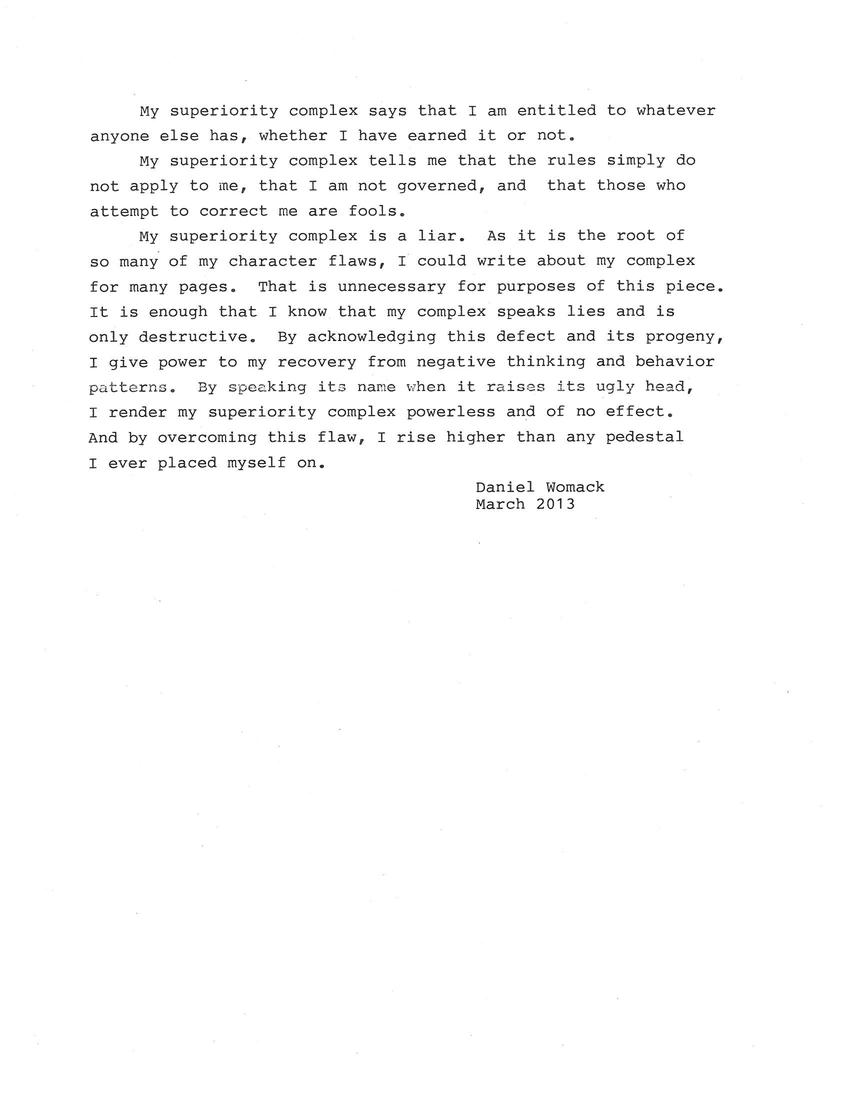 I did my 5th Step a couple weeks ago. In the 12-Steps process, the fifth is when we admit to God, to ourselves, and to another human being the exact nature of our wrongs. Done correctly and thoroughly, it is a very humbling step. Yet so empowering at the same time.

So much of my past has been based on my self-image and the image I wanted others to see. So much of it was a fraud. Yet I allowed that self-image and the desire to shock people to hold me back, to keep me stuck in destructive patterns. For reasons I won't write about in this piece, I behaved in ways I knew would hurt people, even loved ones, just for the sake of the hurt. I thought of myself as some sort of mobster; uncaring, unfeeling, direct, and ruthless. Had I ever made a single coin from this, I might have been called a con man. As it stands, though, I was just a liar.

Considering my huge ego, the revelations in my 5th Step were shocking even to me. My 5th Step shattered that funhouse mirror of illusion and exposed my hurtful truths. And because they are now exposed, I cannot return to my lies. This is the beauty of Step 5: Our hidden demons die in the light of exposure, and we are free to live our lives as our Higher Power wills. There are no more images to maintain, no more lies to defend, no more secrets to keep. Nothing remains to haunt me or to offer an escape through the bottom of a bottle.

A few days ago someone asked me what my biggest weakness is. The answer is easy: my superiority complex.

My superiority complex tells me that, in some significant way, I am better than everyone I come into contact with. Because I am so much better, says my complex, I can rightly judge others harshly, often without any basis in fact.

Of course, my complex has instilled in me great personal pride, an enormous ego. This opens me up to feeling offended easily when challenged, and my over-reactive defense mechanisms fire into high gear.

My superiority complex assures me that I am always right, my behavior always the most appropriate, and my opinions those of the majority, or at least of the few who are likewise superior to the masses.

My superiority complex is also the root of my self-righteousness. My judgments, motives, opinions, and morals are unassailable, according to my complex, and I am intolerant of, and quickly frustrated by, those who question me.

My superiority complex causes me to resent many people, institutions, and ideas which the vast majority of civilized society has no problem with whatsoever. I buck against authority and demonstrate open contempt for and belligerence toward those in higher offices.

My superiority complex says my voice must be the loudest, that everyone must listen as if my word were law, and that I get the final say always. Those who deviate from this course are subject to my aggressive and belittling tactics, which are appropriate, according to my complex.

My superiority complex tells me that anything you can do, I can do better, and that I probably would if it weren't beneath me.

My superiority complex is blaming; my failures occurred because of circumstances beyond my control, and certainly not by any fault of my own.

My superiority complex says that I am the Alpha male, the leader of all groups whether I am qualified and trusted or not.

My superiority complex says that I am entitled to whatever anyone else has, whether I have earned it or not.

My superiority complex tells me that the rules simply do not apply to me, that I am not governed, and that those who attempt to correct me are fools.

My superiority complex is a liar. As it is the root of so many of my character flaws, I could write about my complex for many pages. That is unnecessary for purposes of this piece. It is enough that I know that my complex speaks lies and is only destructive. By acknowledging this defect and its progeny, I give power to my recovery from negative thinking and behavior patterns. By speaking its name when it raises its ugly head, I render my superiority complex powerless and of no effect. And by overcoming this flaw, I rise higher than any pedestal I ever placed myself on.

I am a veteran Colombian that for six years I was part efforts to undertake illegal armed Colombia known as the AUC. reintergre me leaving society and illegal weapons within a peace process with the Colombian state. I did my voluntary surrender to authorities, procuratorates and judges. took more than six years deprived of liberty where each answer for crimes committed during my membership in illegality. I wish to bring a message of peace to children and youth so that they never incorporated into these illegal armed. can learn more about me on the website and email www.pocurandounperdon.com jair@procurandounperdon.com.