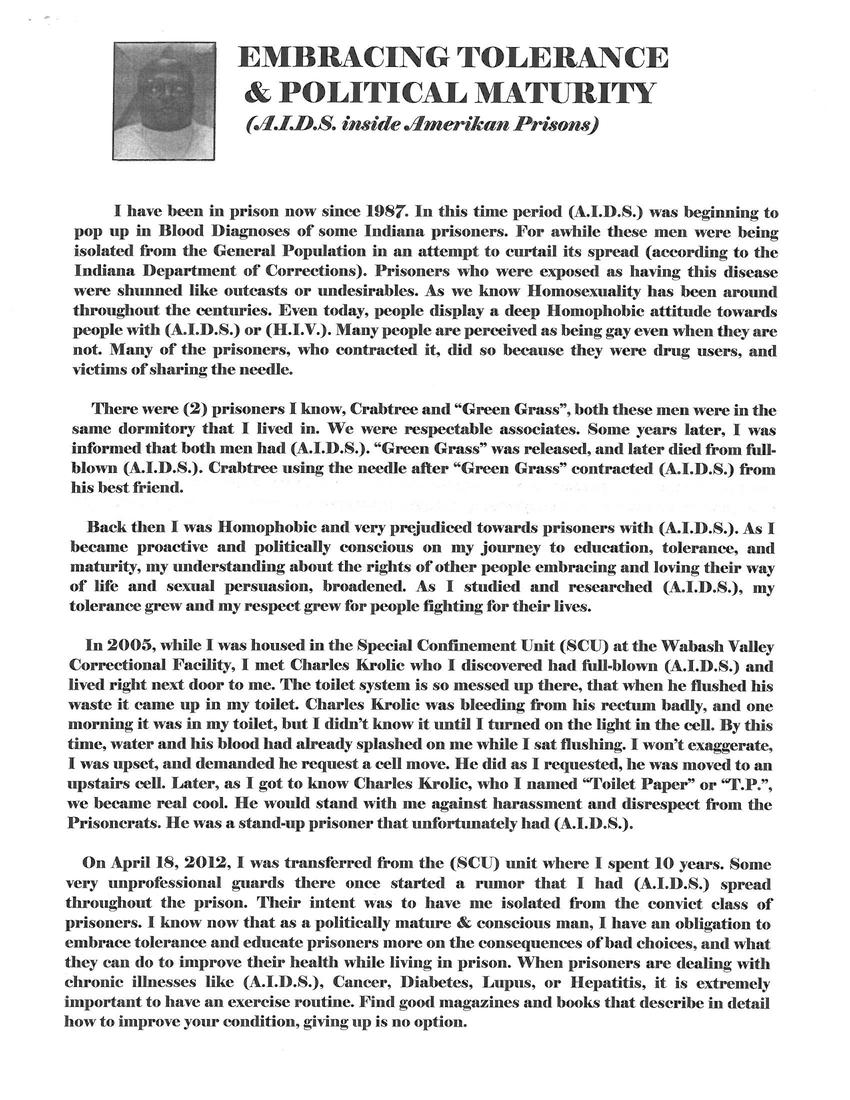 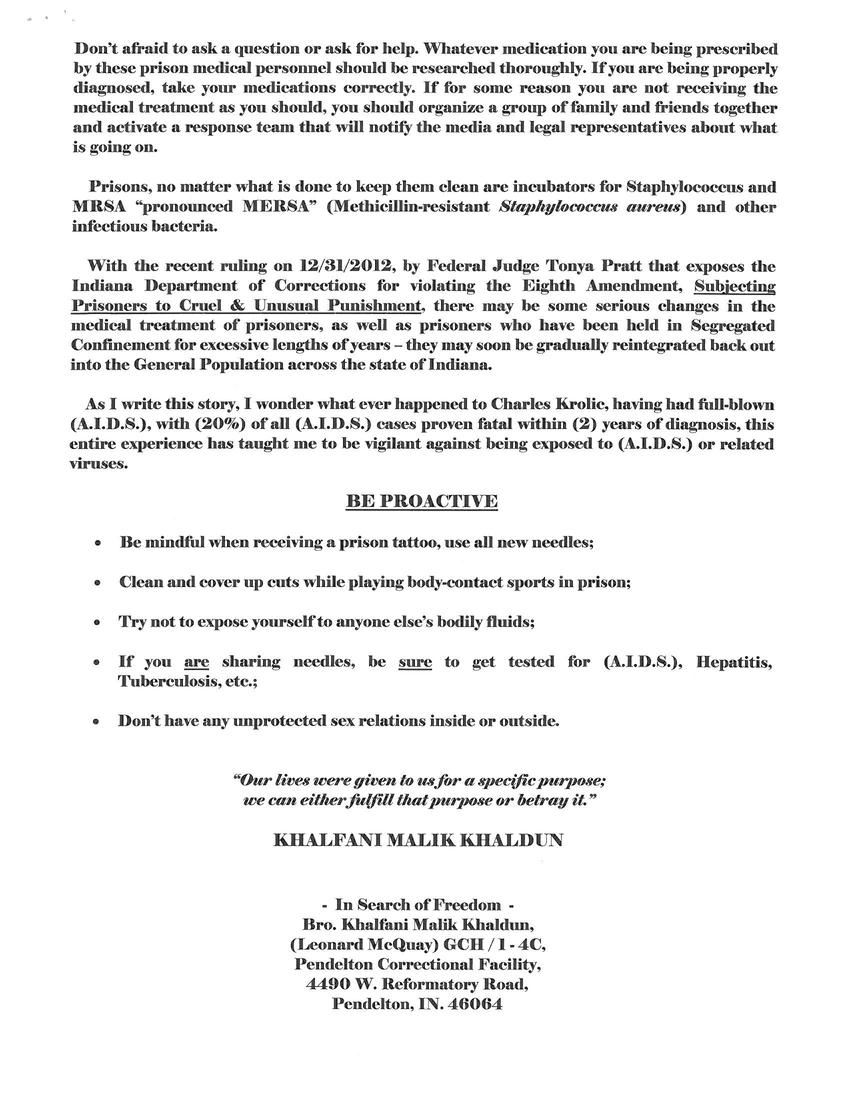 I have been in prison now since 1987. In this time period (A.I.D.S.) was beginning to pop up in Blood Diagnoses of some Indiana prisoners. For awhile these men were being isolated from the General Population in an attempt to curtail its spread (according to the Indiana Department of Corrections). Prisoners who were exposed as having this disease were shunned like outcasts or undesirables. As we know Homosexuality has been around throughout the centuries. Even today, people display a deep Homophobic attitude towards people with (A.I.D.S.) or (H.I.V.). Many people are perceived as being gay even when they are not. Many of the prisoners, who contracted it, did so because they were drug users, and victims of sharing the needle.

There were (2) prisoners I know, Crabtree and "Green Grass", both these men were in the same dormitory that I lived in. We were respectable associates. Some years later, I was informed that both men had (A.I.D.S.). "Green Grass" was released, and later died from full-blown (A.I.D.S.). Crabtree using the needle after "Green Grass" contracted (A.I.D.S.) from his best friend.

Back then I was Homophobic and very prejudiced towards prisoners with (A.I.D.S.). As I became proactive and politically conscious on my journey to education, tolerance, and maturity, my understanding about the rights of other people loving their way of life and sexual persuasion, broadened. As I studied and researched (A.I.D.S.), my tolerance grew and my respect grew for people fighting for their lives.

In 2005, while I was housed in the Special Confinement Unit (SCU) at the Wabash Valley Correctional Facility, I met Charles Krolic who I discovered had full-blown (A.I.D.S.) and lived right next door to me. The toilet system is so messed up there, that when he flushed his waste it came up in my toilet. Charles Krolic was bleeding from his rectum badly, and one morning it was in my toilet, but I didn't know it until I turned on the light in the cell. By this time, water and his blood had already splashed on me while I sat flushing. I won't exaggerate, I was upset, and demanded he request a cell move. He did as I requested, he was moved to an upstairs cell. Later, as I got to know Charles Krolic, who I named "Toilet Paper" or "T.P.", we became real cool. He would stand with me against harassment and disrespect from the Prisoncrats. He was a stand-up prisoner that unfortunately had (A.I.D.S.).

On April 18, 2012, I was transferred from the (SCU) unit where I spent 10 years. Some very unprofessional guards there once started a rumor that I had (A.I.D.S.) spread throughout the prison. Their intent was to have me isolated from the convict class of prisoners. I know now that as a politically mature & conscious man, I have an obligation to embrace tolerance and educate prisoners more on the consequences of bad choices, and what they can do to improve their health while living in prison. When prisoners are dealing with chronic illnesses like (A.I.D.S.), Cancer, Diabetes, Lupus, or Hepatitis, it is extremely important to have an exercise routine. Find good magazines and books that describe in detail how to improve your condition, giving up is no option.

Don't be afraid to ask a question or ask for help. Whatever medication you are being prescribed by these prison medical personnel should be researched thoroughly. If you are being properly diagnosed, take your medications correctly. If for some reason you are not receiving the medical treatment as you should, you should organize a group of family and friends together and activate a response team that will notify the media and legal representatives about what is going on.

Prisons, no matter what is done to keep them clean, are incubators for Staphylococcus and MRSA "pronounced MERSA" (Methicillin-resistant Staphylococcus aureus) and other infectious bacteria.

With the recent ruling on 12/31/2012, by Federal Judge Tonya Pratt that exposes the Indiana Department of Corrections for violating the Eighth Amendment, Subjecting Prisoners to Cruel & Unusual Punishment, there may be some serious changes in the medical treatment of prisoners, as well as prisoners who have been held in Segregated Confinement for excessive lengths of years - they may soon be gradually reintegrated back out into the General Population across the state of Indiana.

As I write this story, I wonder whatever happened to Charles Krolic, having had full-blown (A.I.D.S.), with (20%) of all (A.I.D.S.) cases proven fatal within (2) years of diagnosis, this entire experience has taught me to be vigilant against being exposed to (A.I.D.S.) or related viruses.

* Be mindful when receiving a prison tattoo, use all new needles;

* Clean and cover up cuts while playing body-contact sports in prison;

* Try not to expose yourself to anyone else's bodily fluids;

* If you ARE sharing needles, be SURE to get tested for (A.I.D.S.), Hepatitis, Tuberculosis, etc.;

* Don't have any unprotected sex relations inside or outside.

"Our lives were given to us for a specific purpose; we can either fulfill that purpose or betray it."