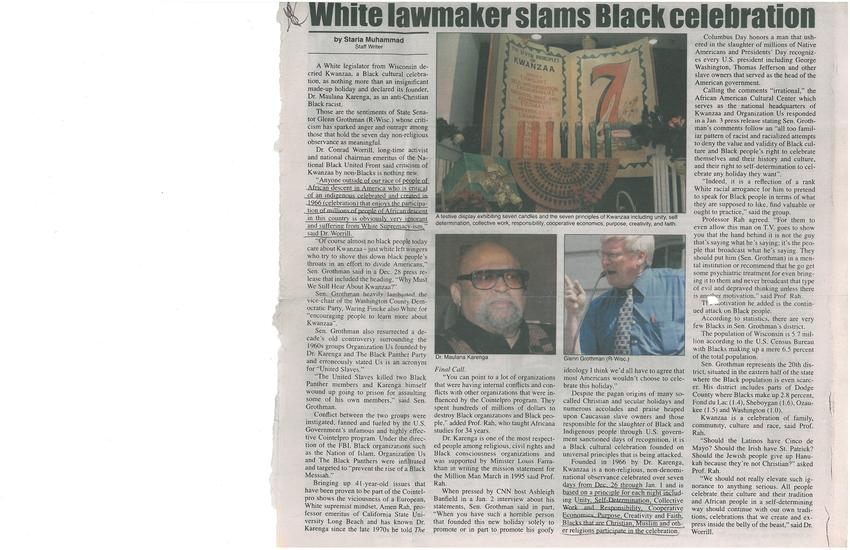 A White legislator from Wisconsin decried Kwanzaa, a Black cultural celebration, as nothing more than an insignificant made-up holiday and declared its founder, Dr. Maulana Karenga, as an anti-Christian Black racist.

Those are the sentiments of State Senator Glenn Grothman (R-Wisc) whose criticism has sparked anger and outrage among those that hold the seven day non-religious observance as meaningful.

"Of course almost no black people today care about Kwanzaa - just white left-wingers who try to shove this down black people's throats in an effort to divide Americans", Sen. Grothman said in Dec. 28 press release that included the heading, "Why Must We Still Hear About Kwanzaa?"

Sen. Grothman also resurrected a decades old controversy surrounding the 1960s groups Organization Us founded by Dr. Karenga and The Black Panther Party and erroneously stated Us is an acronym for "United Slaves".

"The United Slaves killed two Black Panther members and Karenga himself wound up going to jail for assaulting some of his own members", said Sen. Grothman.

Conflict between the two groups were instigated, fanned and fueled by the U.S. Government's infamous and highly effective Cointelpro program. Under the direction of the FBI, Black organizations such as the Nation of Islam, Organization Us and the Black Panthers were infiltrated and targeted to "prevent the rise of a Black Messiah".

Bringing up 41-year-old issues that have been proven to be part of the Cointelpro shows the viciousness of a European, White supremacist mindset, Amen Rah, professor emeritus of California State University Long Beach and has known Dr. Karenga since the last 1970s he told The Final Call.

Dr. Karenga is one of the most respected people among religion, civil rights and Black consciousness organizations and was supported by Minister Louis Farrakhan in writing the mission statement for the Million Man March in 1995, said Prof. Rah.

When pressed by CNN host Ashleigh Banfield in a Jan. 2 interview about his statements, Sen. Grothman said in part, "When you have such a horrible person that founded this new holiday solely to promote or in part to promote his goofy ideology I think we'd all have to agree that most Americans wouldn't choose to celebrate this holiday."

Despite the pagan origins of many so-called Christian and secular holidays and numerous accolades and praise heaped upon Caucasian slave owners and those responsible for the slaughter of Black and Indigenous people through U.S. government sanctioned days of recognition, it is a Black cultural celebration founded on universal principles that is being attacked.

Founded in 1966 by Dr. Karenga, Kwanzaa is a non-religious, non-denominational observance celebrated over seven days from Dec. 26 through Jan. 1 and is based on a principle for each night including Unity, Self-Determination, Collective Work and Responsibility, Cooperative Economics, Purpose, Creativity and Faith. Blacks that are Christian, Muslim and other religions participate in the celebration.

Columbus Day honors a man that ushered in the slaughter of millions of Native Americans and Presidents' Day recognizes every U.S. president including George Washington, Thomas Jefferson and other slave owners that served as the head of the American government.

Calling the comments "irrational", the African American Cultural Center which serves as the national headquarters of Kwanzaa and Organization Us responded in Jan. 3 press release stating Sen. Grothman's comments follow an "all too familiar pattern of racist and racialized attempts to deny the value and validity of Black culture and Black people's right to celebrate themselves and their history and culture, and their right to self-determination to celebrate any holiday they want".

"Indeed, it is a reflection of a rank White racial arrogance for him to pretend to speak for Black people in terms of what they are supposed to like, find valuable or ought to practice", said the group.

Professor Rah agreed. "For them to even allow this man on T.V. goes to show you that the hand behind it is not the guy that's saying what he's saying: it's the people that broadcast what he's saying. They should put him (Sen. Grothman) in a mental institution or recommend that he get some psychiatric treatment for even bringing it to them and never broadcast that type of evil and depraved thinking unless there is another motivation", said Prof. Rah.

The motivation, he added, is the continued attack on Black people.

According to statistics, there are very few Blacks in Sen. Grothman's district.

The population of Wisconsin is 5.7 million according to the U.S. Census Bureau with Blacks making up a mere 6.5 percent of the total population.

Sen. Grothman represents the 20th district, situated in the eastern half of the state where the Black population is even scarcer. His district includes parts of Dodge County where Blacks make up 2.8 percent, Fond du Lac (1.4), Sheboygan (1.6), Ozaukee (1.5) and Washington (1.0).

Kwanzaa is a celebration of family, community, culture and race, said Prof. Rah.

"Should the Latinos have Cinco de Mayo? Should the Irish have St. Patrick? Should the Jewish people give up Hanukkah because they're not Christian?" asked Prof. Rah.

"We should not really elevate such ignorance to anything serious. All people celebrate their culture and their tradition and African people in a self-determining way should continue with our own traditions, celebrations that we create and express inside the belly of the beast", said Dr. Worrill.