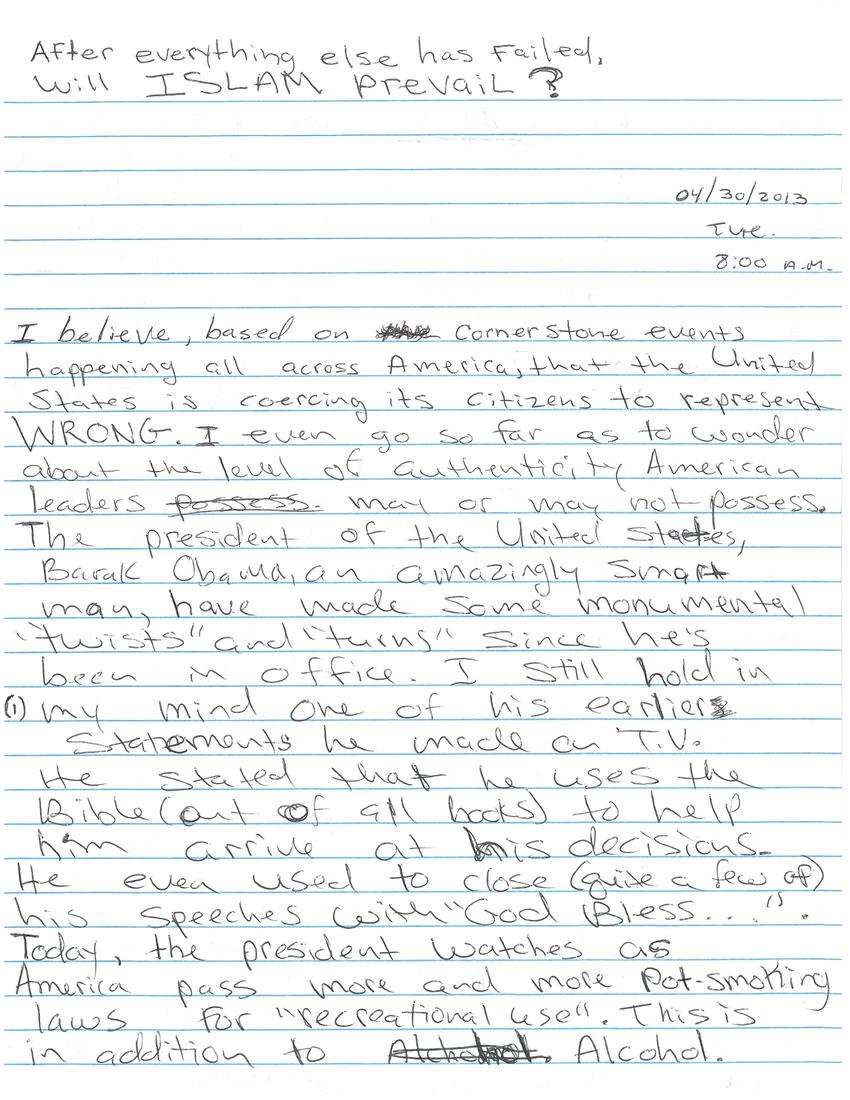 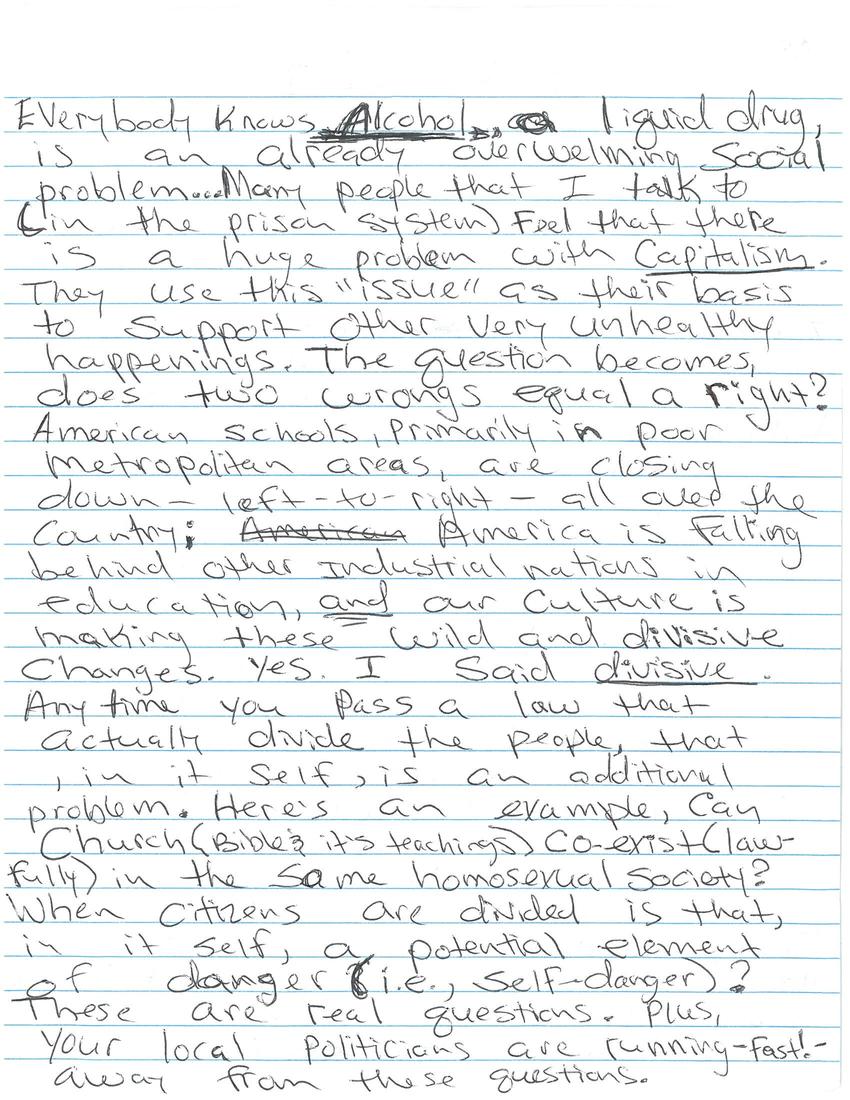 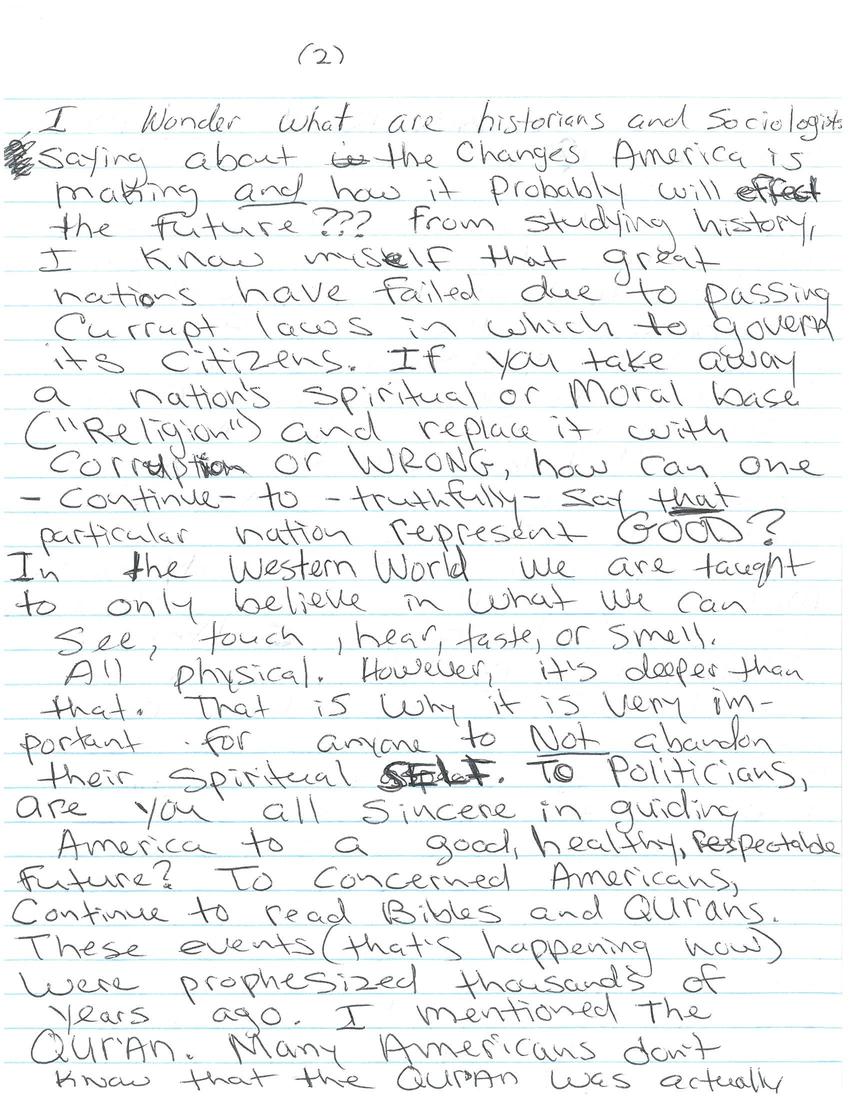 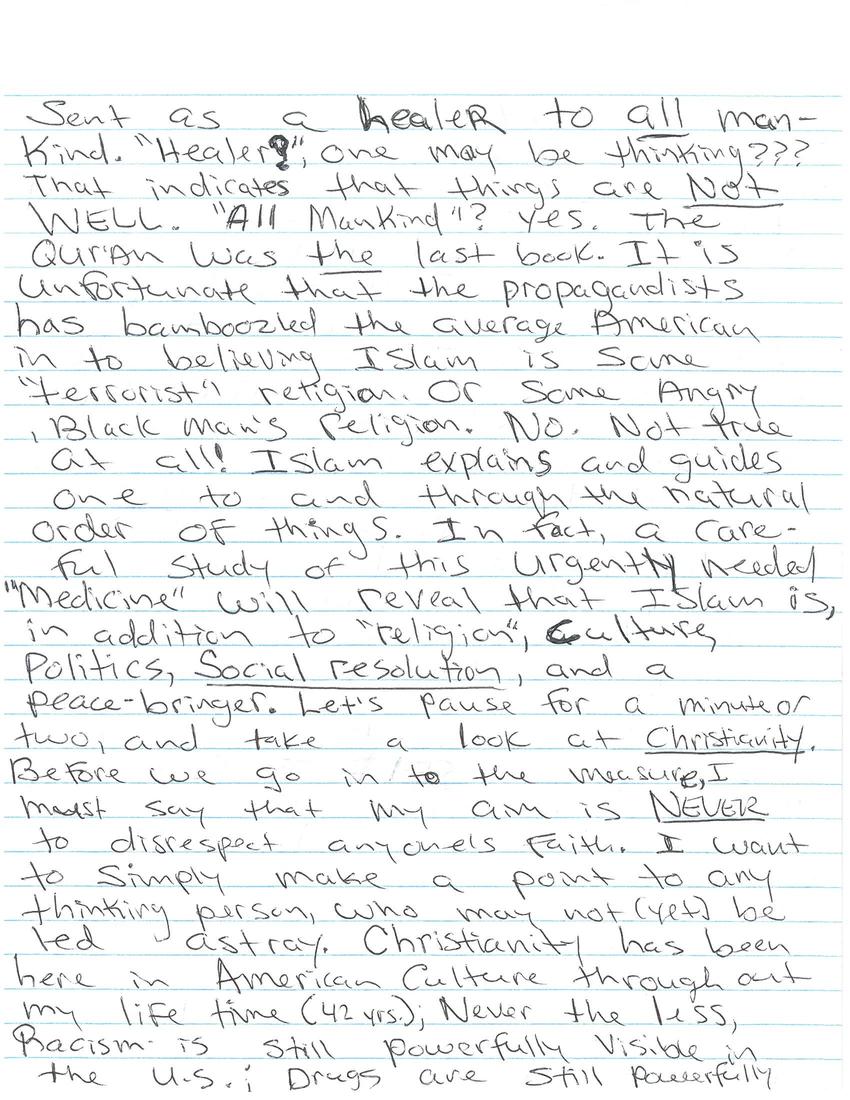 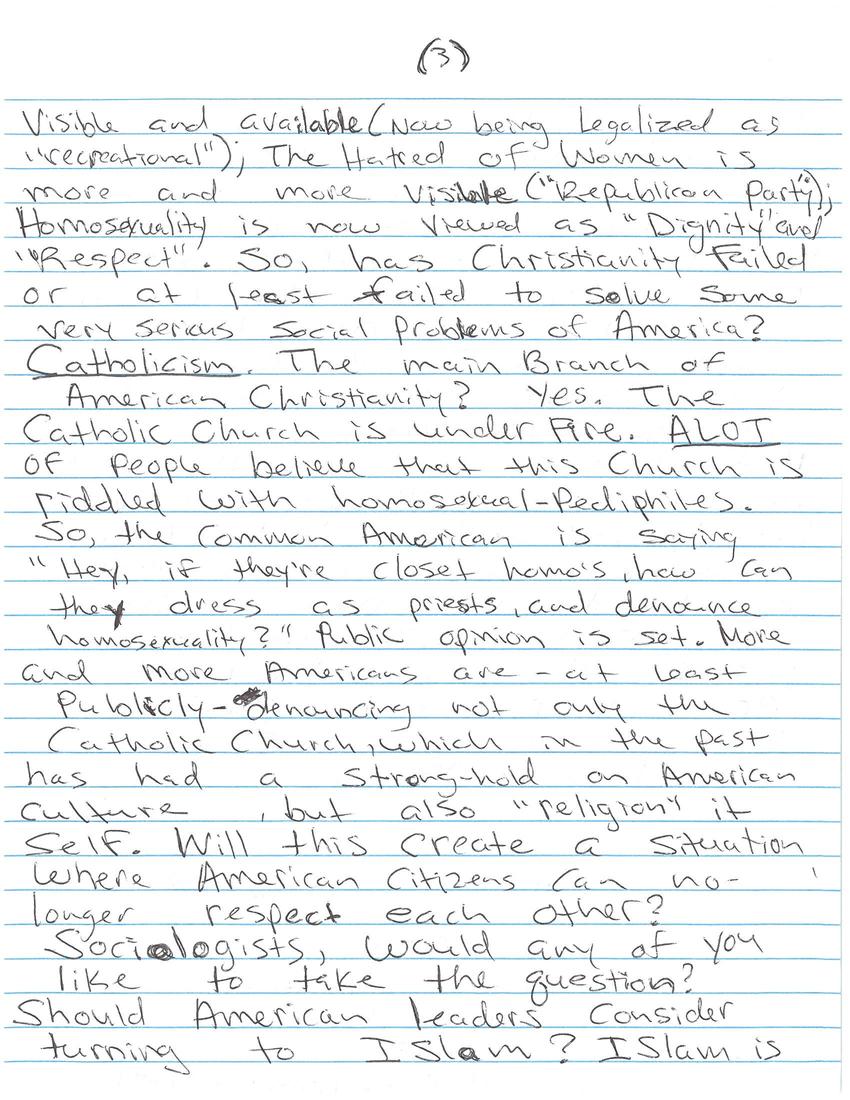 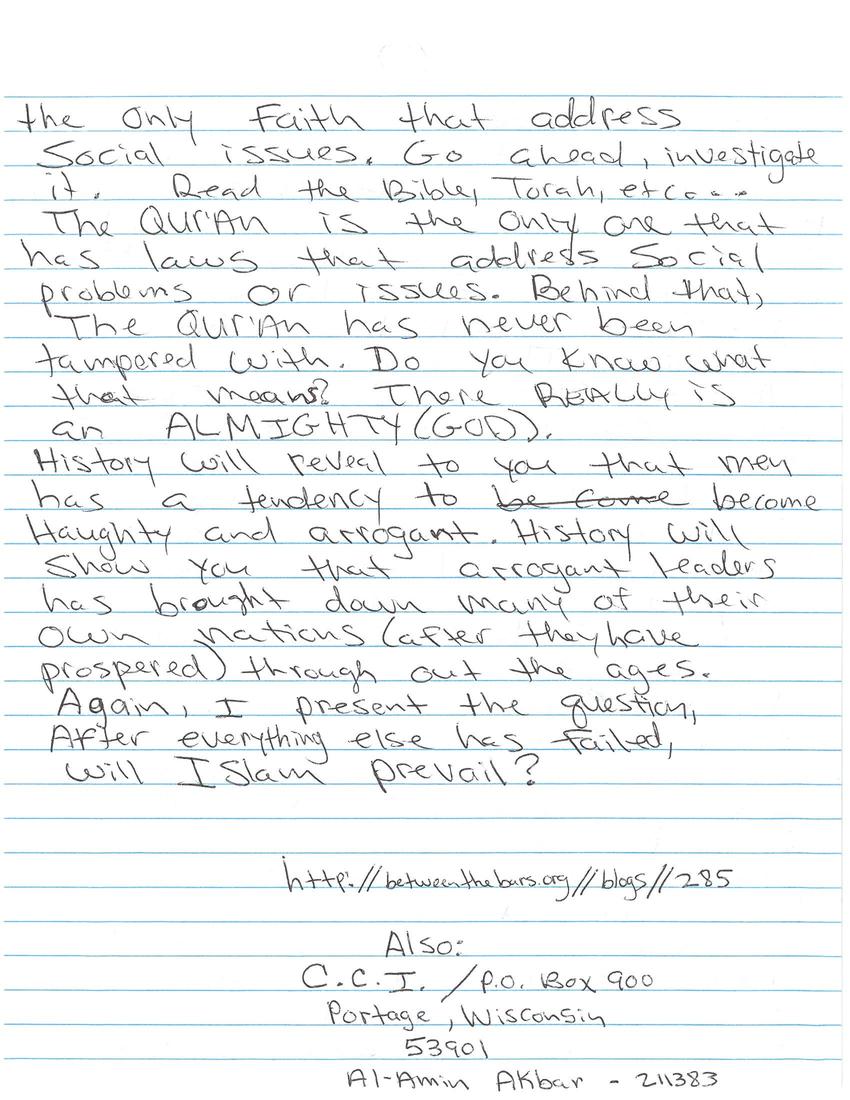 After everything else has failed, will ISLAM prevail?

I believe, based on cornerstone events happening all across America, that the United States is coercing it's citizens to represent WRONG. I even go so far as to wonder about the level of authenticity American leaders my or may not possess. The president of the United States, Barack Obama, an amazingly smart man, have made some monumental "twists" and "turns" since he's been in office. I still hold in my mind one of his earlier statements he made on T.V. He stated that he uses the Bible (out of all books) to help him arrive at his decisions. He even used to close (quite a few of) his speeches with "God Bless...". Today, the president watches as America pass more and more pot-smoking laws for "recreational use." This is in addition to alcohol. Everybody knows ALCOHOL, a liquid drug is an already overwhelming social problem...Many people that I talk to (in the prison system) feel that there is a huge problem with CAPITALISM. They us this "issue" as their basis to support other very unhealthy happenings. The question becomes, does two wrongs equal a right? American schools, primarily in poor metropolitan areas, are closing down - left - to - right - all over the country: America is falling behind other industrial nations in education, AND our culture is making these wild and divisive changes. Yes. I said DIVISIVE. Anytime you pass a law that actually divide the people, that, in itself is an additional problem. Here's an example, can church (Bible & it's teachings) co-exist (law-fully) in the same homosexual society? When citizens are divided is that, in itself, a potential element of danger (i.e., self-danger)? These are real questions. Plus,your local politicians are running - fast! - away from these questions.

I wonder what are historians and sociologists saying about the changes America is making AND how it probably will effect the future??? From studying history, I know myself that great nations have failed due to passing corrupt laws in which to govern it's citizens. If you take away a nation's spiritual or moral base ("religion") and replace it with corruption or WRONG, how can one - continue - to - truthfully - say THAT particular nation represent GOOD? In the western world we are taught to only believe in what we can see, touch, hear, taste, or smell. All physical. However, it's deeper than that. That is why it is very important for anyone to NOT abandon their spiritual SELF. To politicians, are you all sincere in guiding America to a good, healthy, respectable future? To concerned Americans, continue to read Bibles and Qurans. These events (that's happening now) were prophesized thousands of years ago. I mentioned the QURAN. Many American's don't know that the QURAN was actually sent as a healer to ALL mankind. "Healer?", one may be thinking??? That indicates that things are NOT WELL. "All Mankind?" Yes. The QURAN was THE last book. It is unfortunate that the propagandists has bamboozled the average American into believing Islam is some "terrorist" religion. Or some angry black man's religion. No. Not true at all! Islam explains and guides one to and through the natural order of things. In fact, a careful study of this urgently needed "medicine" will reveal that Islam is, in addition to "religion", culture, politics, SOCIAL RESOLUTION, and a peace-bringer. Let's pause for a minute or two, and take a look at CHRISTIANITY. Before we go in to the measure, I must say that my aim is NEVER to sidrespect anyone's faith. I want to simply make a point to any thinking person, who may not (yet) be led astray. Christianity has been here in American culture throughout my lifetime (42 yrs.); Nevertheless, racism is still powerfully visible in the U.S.; Drugs are still powerfully visible and available (now being legalized as "recreational"); the Hatred of Women is more and more visible ("Republican Party"); homosexuality is now viewed as "Dignity" and "Respect." So, has Christianity failed or at least failed to solve some very serious social problems of America? CATHOLICISM. The main Branch of American Christianity? Yes. The Catholic shurch is under fire. ALOT of people believe that this church is riddled with homosexual-pediphiles. So, the common American is saying "Hey, if they're closet homo's, how can they dress as priests, and denounce homosexuality?" Public opinion is set. More and more Americans are - at least publicly-denouncing not only the Catholic church, which in the past has had a strong-hold on American culture, but also "religion" itself. Will this create a situation where American citizens can no longer respect each other?

Sociologists, would any of you like to take the question? Should American leaders consider turning to Islam? Islam is the only faith that address social issues. Go ahead, investigate it. Read the Bible, Torah, etc...the QURAN is the only one that has laws that address social problems or issues. Behind that, the QURAN has never been tampered with. Do you know what that means? There really is an ALMIGHTY (GOD).

History will reveal to you that man has a tendency to become haughty and arrogant. History will shoe you thst arrogant leaders has brought down many of their own nations (after they have prospered) throughout the ages. Again, I present the question, after everything else has failed, will Islam prevail?