Is Islam The Heritage Of African-Americans? 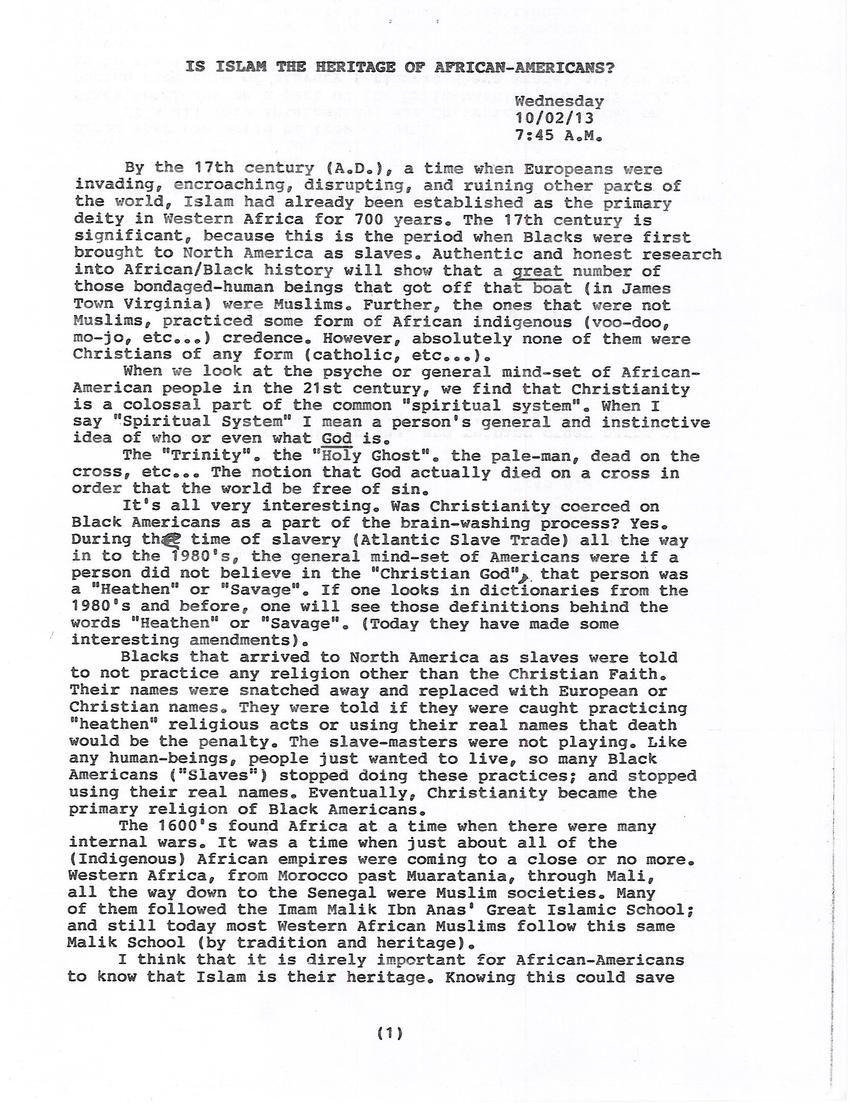 IS ISLAM THE HERITAGE OF AFRICAN-AMEERICANS?

By the 17th century (A.D.), a time when Europeans were invading, encroaching, disrupting, and ruining other parts of the world, Islam had already been established as the primary deity in Western Africa for 700 years. The 17th century is significant, because this is the period when Blacks were first brought to North America as slaves. Authentic and honest research into African/Black history will show that a great number of those bondaged-human beings that got off that boat (in James Town Virginia) were Muslims. Further, the ones that were not Muslims, practiced some form of African indigenous (voo-doo, mo-jo, etc...) credence. However, absolutely none of them were Christians of any form (catholic, etc...).
When we look at the psyche or general mind-set of African-American people in the 21st century, we find that Christianity is a colossal part of the common "spiritual system". When I say "Spiritual System" I mean a person's general and instinctive idea of who or even what God is.
The "Trinity". the "Holy Ghost"". the pale-man, dead on the cross, etc... The notion that God actually died on a cross in order that the world be free of sin.
It's all very interesting. Was Christianity coerced on Black Americas as a part of the brain-washing process? Yes. During the time of slavery (Atlantic Slave Trade) all the way in to the 1980's, the general mind-set of Americans were if a person did not believe in the "Christian God", that person was a "Heathen" or "Savage". If one looks in dictionaries from the 1980's and before, one will see those definitions behind the words "Heathen" or "Savage". (Today they have made some interesting amendments).
Blacks that arrived to North America as slaves were told to not practice any religion other than the Christian Faith. Their names were snatched away and replaced with European or Christian names. They were told if they were caught practicing "heathen" religious acts or using their real names that death would be the penalty. The slave-masters were not playing. Like any human-beings, people just wanted to live, so many Black Americans ("Slaves") stopped doing these practices; and stopped using their real names. Eventually, Christianity became the primary religion of Black Americans.
The 1600's found Africa at a time when there were many internal wars. It was a time when just about all of the (Indigenous) African empires were coming to a close or no more. Western Africa, from Morocco past Mauritania, through Mali, all the way down to the Senegal were Muslim societies. Many of them followed the Imam Malik Ibn Anas' Great Islamic School; and still today most Western African Muslims follow this same Malik School (by tradition and heritage).
I think that it is direly important for African-Americans to know that Islam is their heritage. Knowing this could save African-Americans from being bamboozled in to going astray; for example, when you look at the most recognized and popular African-American leaders today, they're running around the country laughing, smiling, and shaking hands; all while trying to convince our people to embrace wrong and go away from their right. They are telling our people to go away from their spiritual beliefs and to sever the 10 Commandments.
When you take a close look at American Culture today, you see a culture stripped of morals, a culture that is wildly aggressive, a culture that is war-hungry; The American financial system is gradually and alarmingly slipping, American citizens more angry than they've ever been before, more home-grown terrorism than ever before. When you look at many American women today (rather "Black", "White", "Latina", etc...), they are over-sexual in dress and in their expression; a woman is a reflection of the man...In the large cities across America, Black neighbourhoods are lit red-hot with youth-violence. So much youth-violence that Black "leaders" can't or will not bring it to a halt; Islam is the solution. Black Americans NEED to know that Islam is their Heritage.
Also, Black Americans NEED to come back to Islam. Islam will connect Black Americans back to their Authentic History. Plus, it will bring them peace, patience, and love for each other. I think that it is horrific that Black American leaders put so much energy in to telling our people to embrace corruption, rather than telling them to pray more or take the Shahada. I believe instead of coercing wrong on the people, African-American leaders should be pushing State law makers across the country to teach Authentic African-History in the public school curriculum.
Here in the Wisconsin Prison System, more and more African-American men (at alarming numbers) are embracing Islam. Why aren't these men embracing Judaism, Catholicism, or believing more in Christianity? They are saying that they don't want Christianity, they don't want Capitalism, they don't want homosexuality; Many of them just want to learn who they are. These are the reasons (the main reasons I hear) as to why so many African-American, incarcerated males are embracing Islam.
I have a deep love and appreciation for Black-Americans and our on-going struggles and it disturbs me to hear, know, and witness what out illustrious 21st century leaders are teaching our people. Islam is not only a "religion"; it is a culture, politics, tradition, and (For African-Americans), HERITAGE. The late Noble Drew Ali said it best, when he taught us... "Islamism". My message to all African-Americans? Come back to your heritage. Don't go astray.

so true. thanks for the exposition. every african america needs to read this.