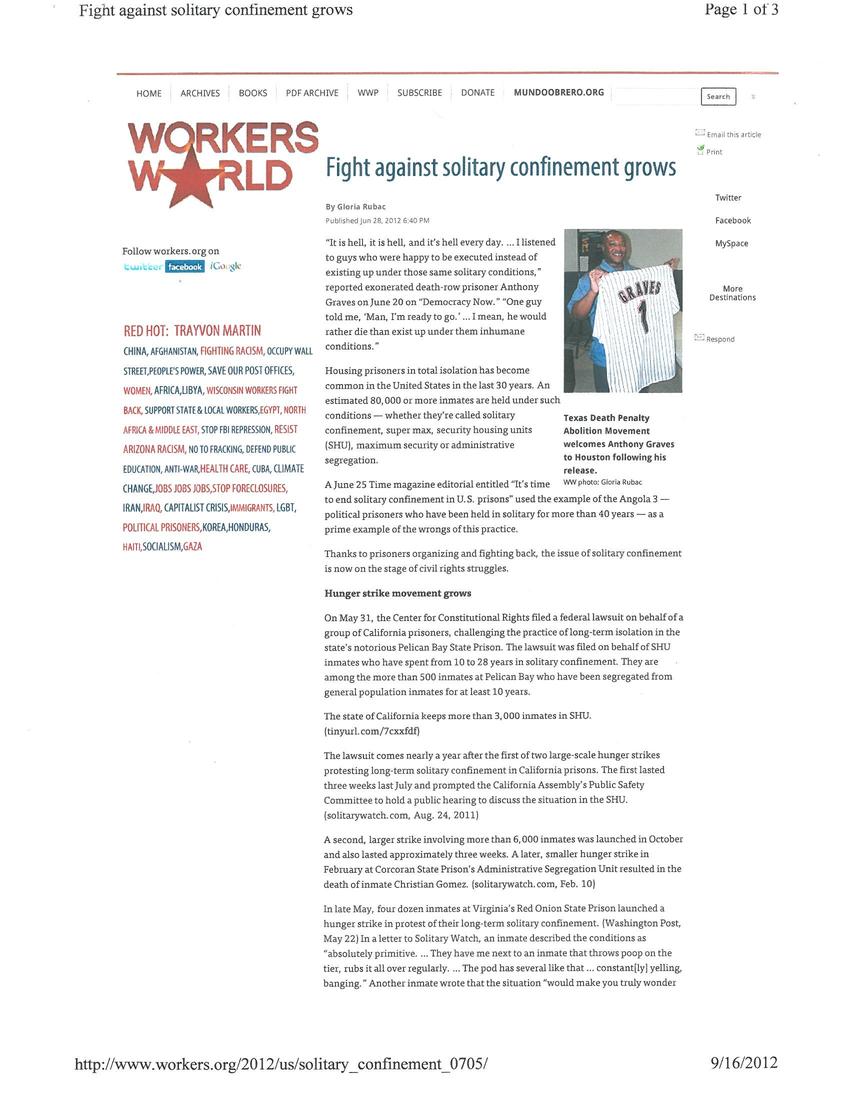 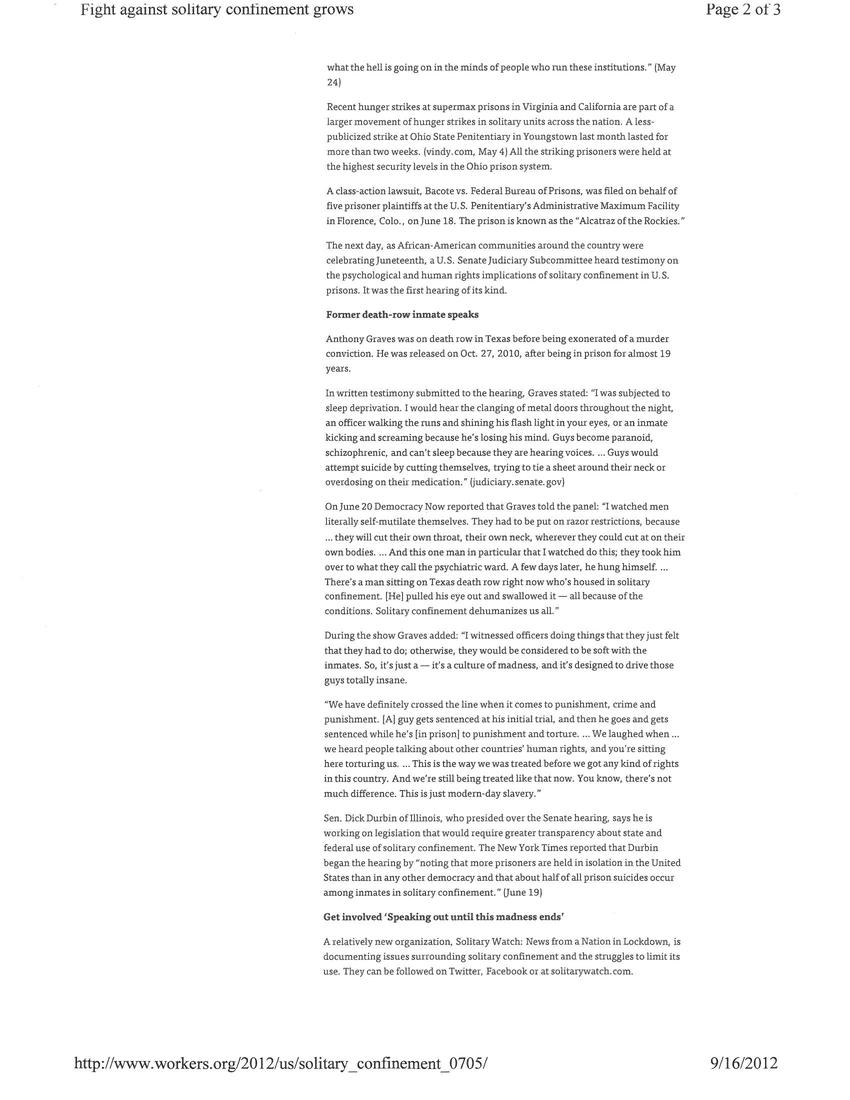 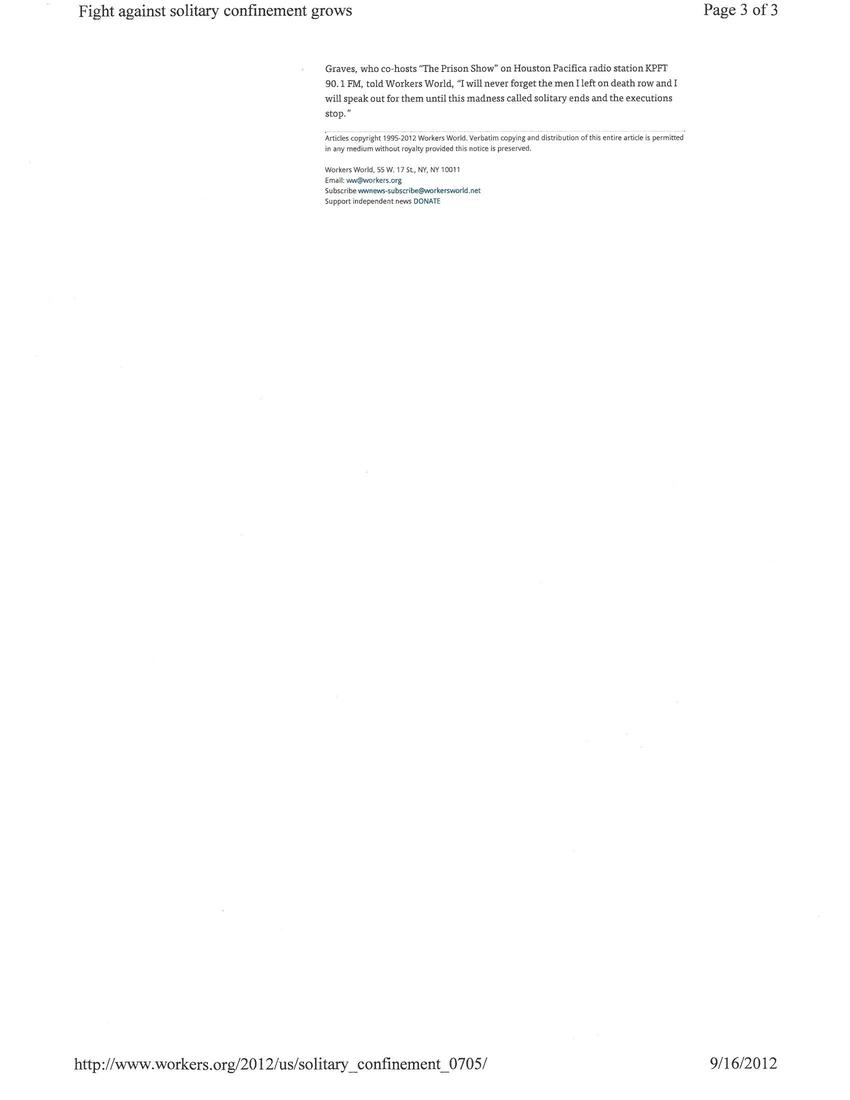 "It is hell, it is hell, and it's hell everyday. I listened to guys who were happy to be executed instead of existing up under those same solitary condition," reported exonerated death-row prisoner Anthony Graves on June 20 on "Democracy Now." "One guy told me, 'Man, I'm ready to go.' ...I mean, he would rather die than exist up under them inhumane conditions."

Housing prisoners in total isolation has become common in the United States in the last 30 years. An estimated 80,000 or more inmates are held under such conditions - whether they're called solitary confinement, super max, security housing units (SHU), maximum security or administrative segregation.

A June 25 Time Magazine editorial entitled "It's time to end solitary confinement in US prisons" used the example of the Angola 3 - poltical prisoners who have been held in solitary for more than 40 years - as a prime example of the wrongs of this practice.

Thanks to prisoners organising and fighting back, the issue of solitary confinement is now on the stage of civil rights struggles.

On May 31, the Center for Constitutional Rights filed a federal lawsuit on behalf of a group of California prisoners, challenging the practice of long-term isolation in the state's notorious Pelican Bay State Prison. The lawsuit was filed on behalf of SHU inmates who have spent from 10 to 28 years in solitary confinement. They are among the more than 500 inmates at Pelican Bay who have been segregated from general populations inmates for at least 10 years.

The state of California keeps more than 3,000 inmates in SHU.
(tinyurl.com/7cxxfdf)

The lawsuit comes nearly a year after the first of two large-scale hunger strikes protesting long-term solitary confinement in California prisons. The first lasted three weeks last July and prompted the California Assembly's Public Safety Committee to hold a public hearing to discuss the situation in the SHU.
(solitarywatch.com, Aug. 24, 2011)

In late May, four dozen inmates at Virginia's Red Onion State Prison launched a hunger strike in protest of their long-term solitary confinement. (Washington Post, May 22). In a letter to Solitary Watch, an inmate described the conditions as "absolutely primitive... They have me next to an inmate that throws poop on the tier, rubs it all over regularly... The pod has several like that... constant[ly] yelling, banging." Another inmate wrote that the situation "would make you truly wonder what the hell was going on in the minds of the people who run these institutions." (May 24)

Recent hunger strikes at supermax prisons in Virginia and California are part of a larger movement of hunger strikes in solitary units across the nation. A less-publicised strike at Ohio State Penitentiary in Youngstown last month lasted for more than two weeks. (vindy.com, May 4) All the striking prisoners were held at the highest security levels in the Ohio prison system.

A class-action lawsuit, Bactote vs. Federal Bureau of Prisons, was filed on behalf of five prison plaintiffs at the US Penitentiary's Administrative Maximum Facility in Florence, Colo., on June 18. The prison is known as the "Alcatraz of the Rockies."

The next day, as African-American communities around the country were celebrating Juneteenth, a US Senate Judiciary Subcommittee heard testimony on the psychological and human rights implications of solitary confinement in US prisons. It was the first hearing of its kind.

Anthony Graves was on death row in Texas before being exonerated of a murder conviction. He was released on Oct. 27, 2010, after being in prison for almost 19 years.

In written testimony submitted to the hearing, Graves stated: "I was subjected to sleep deprivation. I would hear the clanging of metal doors throughout the night, an officer walking the runs and shining his flash light in your eyes, or an inmate kicking and screaming because he's losing his mind. Guys become paranoid, schizophrenic, and can't sleep because they are hearing voices... Guys would attempt suicide by cutting themselves, trying to tie a sheet around their neck or overdosing on their medication." (judiciary.senate.gov)

On June 20 Democracy Now reported that Graves told the panel: "I watched men literally self-mutilate themselves. They had to be put on razor restrictions, because... they will cut their own throat, their own neck, wherever they could cut on their own bodies. ...And this one man in particular that I watched do this; they took him over to what they call the psychiatric ward. A few days later, he hung himself. ... There's a man sitting on Texas death row right now who's housed in solitary confinement. [He] pulled his eye out and swallowed it - all because of the conditions. Solitary confinement dehumanises us all."

During the show Graves added: "I witnessed officers doing things that they felt they had to do; otherwise, they would be considered to be soft with the inmates. So, it's just a - it's a culture of madness, and it's designed to drive those guys totally insane."

"We have definitely crossed the line when it comes to punishment, crime and punishment. [A] guys gets sentenced at his initial trial, and then he goes and gets sentenced while he's [in prison] to punishment and torture... We laughed when... we heard people talking about other countries' human rights, and you're sitting here torturing us. ...This is the way we was treated before we got any kinds of rights in this country. And we're still being treated like that now. You know, there's not much difference. This is just modern-day slavery."

Sen. Dick Durbin of Illinois, who presided over the Senate hearing, says he is working on legislation that would require greater transparency about state and federal use of solitary confinement. The New York Times reported that Durbin began the hearing by "noting that more prisoners are held in isolation in the United States than in any other democracy and that all half of all prison suicides occur among inmates in solitary confinement." (June 19)

Get involved 'Speaking out until this madness ends'

A relatively new organisation, Solitary Watch: News from a Nation in Lockdown, is documenting issues surrounding solitary confinement and the struggles to limit its use. They can be followed on Twitter, Facebook or at solitarywatch.com.

Graves, who co-hosts "The Prison Show" on Houston Pacifica radio station KPFT 90.1 FM, told Workers World, "I will never forget the men I left on death row and I will speak out for them until this madness called solitary ends and the executions stop."

If everyone the (entire) world would read the Messages of True Life IN God, their lives would be filled with love, peace and Joy. (TLIG.ORG.AU)