Thirty Plus Days In Ad-Seg. 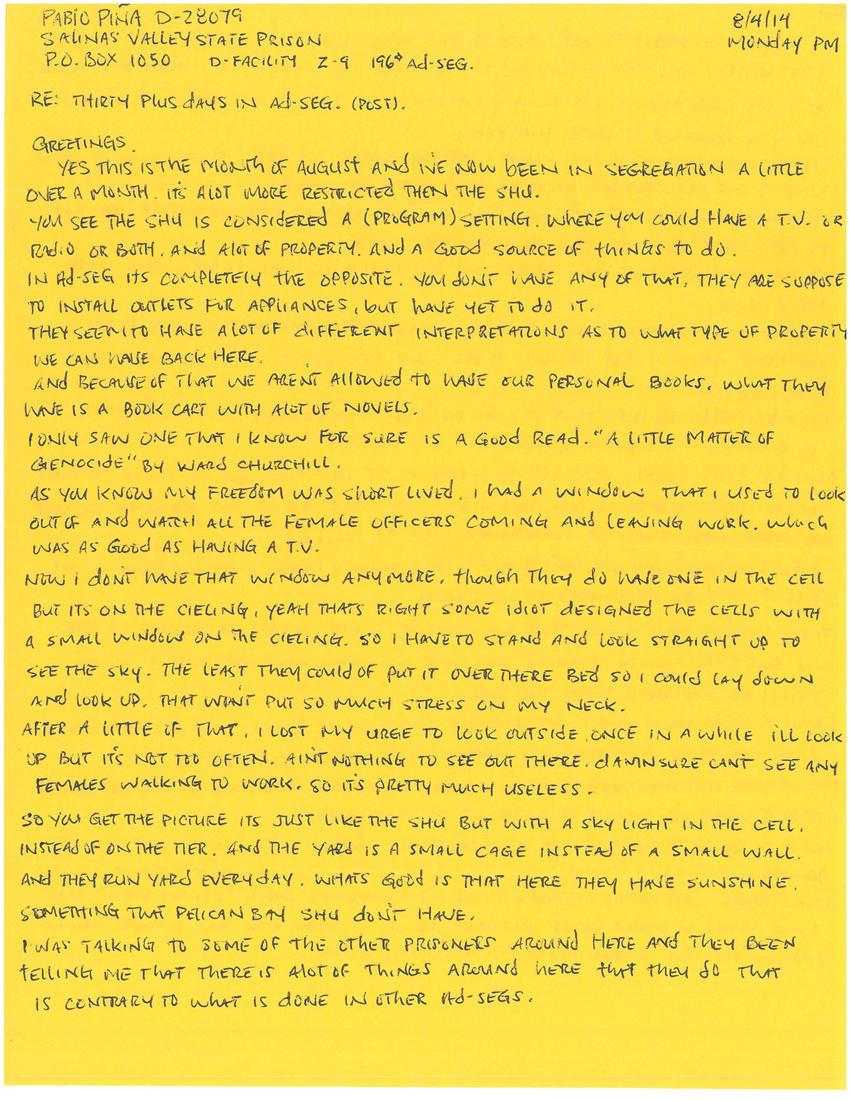 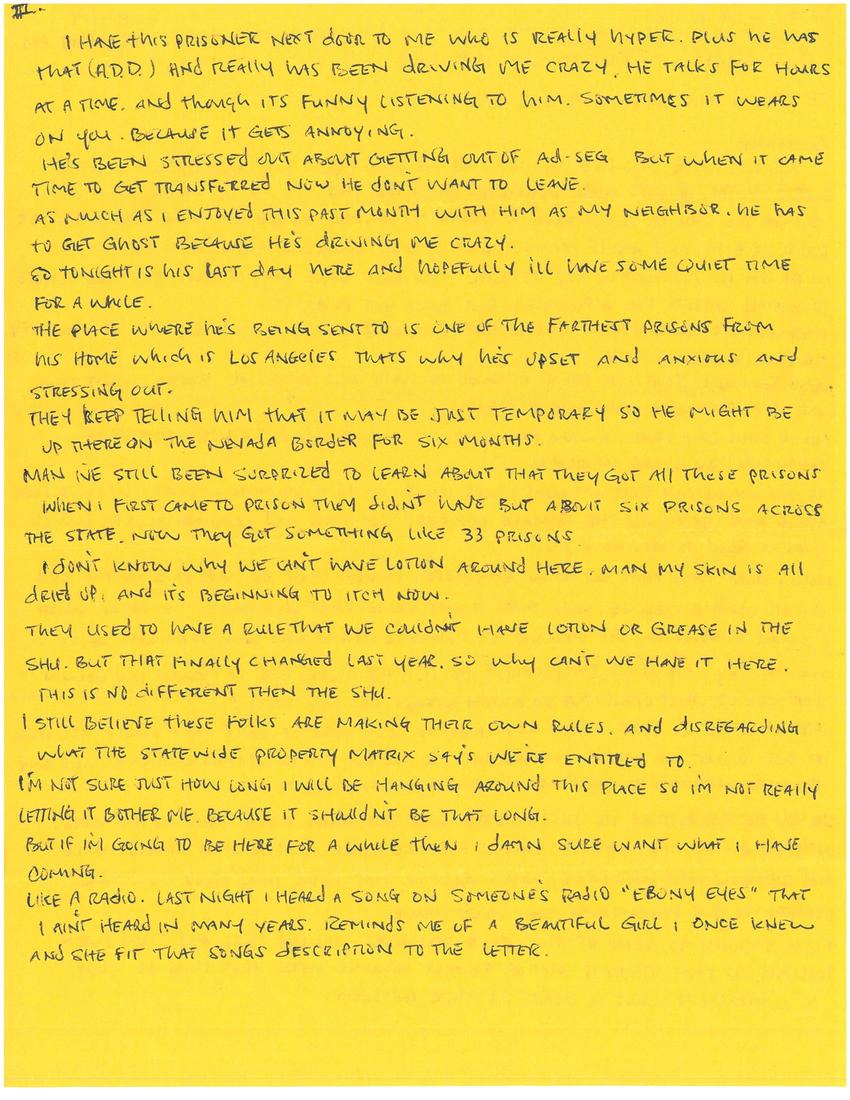 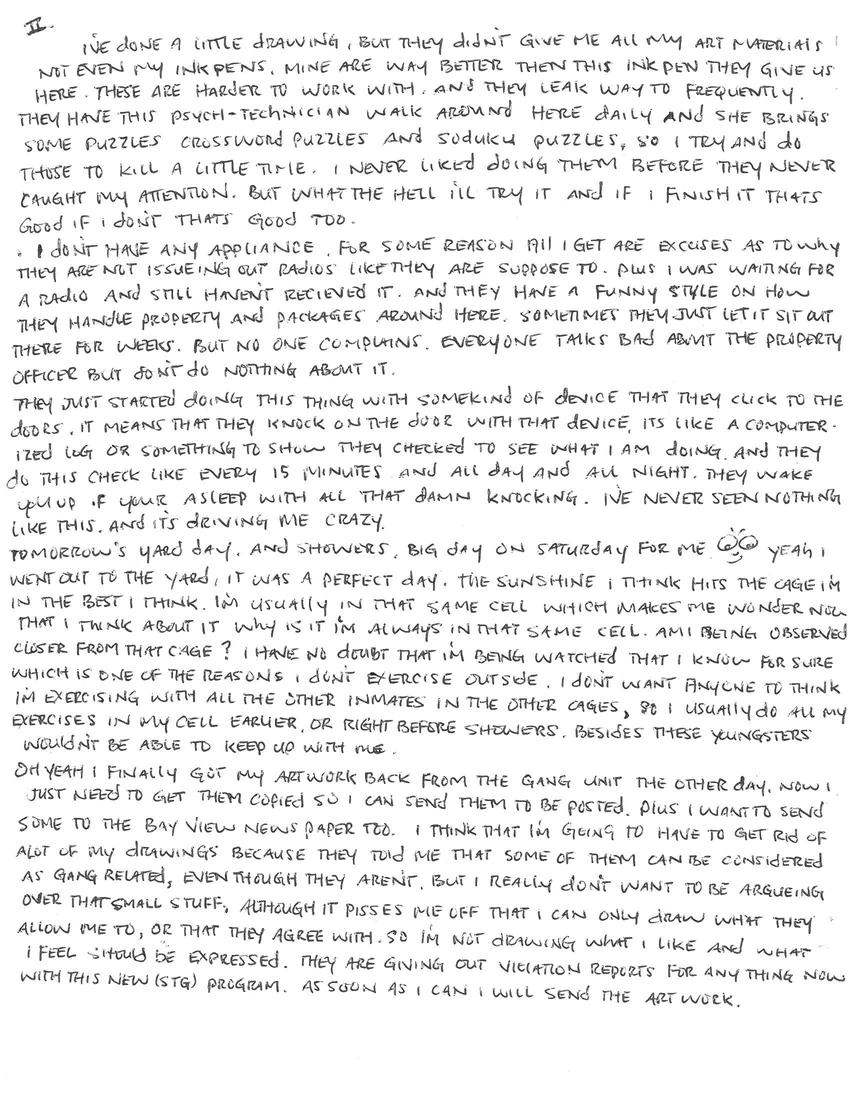 Greetings,
Yes this is the month of August and I've now been in segregation a little over a month. It's a lot more restricted then the SHU. You see the SHU is considered a (Program) setting. Where you could have a T.V. or radio or both and a lot of property and a good source of things to do. In Ad-SEG its completely the opposite. You don't have any of that, they are suppose to install outlets for appliances, but have yet to do it. They seem to have a lot of different interpretations as to what type of property we can have back here. And because of that we aren't allowed to have our personal books, what they have is a book cart with a lot of novels. I only saw one that I know for sure is a good read, "A Little Matter of Genocide" by Ward Churchill. As you know my freedom was short lived. I had a window that I used to look out of and watch all the female officers coming and leaving work which was as good as having a T.V.

Now I don't have that window anymore, though they do have one in the cell but is on the ceiling, yeah that's right some idiot designed the cells with a small window on the ceiling. So I have to stand and look straight up to see the sky. The least they could of put it over there bed so I could lay down and look up, that won't put so much stress on my neck.

After a little of that, I lost my urge to look outside. Once in a while I'll look up but it's not too often. Ain't nothing to see out there. Damn sure can't see any females walking to work. So it's pretty much useless. So you get the picture it's just like the SHU but with a sky light in the cell, instead of on the tier. And the yard is a small cage instead of a small wall and they run yard everyday. What's good is that here they have sunshine, something that Pelican Bay SHU don't have.

I was talking to some of the other prisoners around here and they been telling me that there is a lot of things around here that they do that in contrary to what is done in other Ad-SEGS.

I have this prisoner next door to me who is really hyper. Plus he has that (A.D.D.) and really has been driving me crazy. He talks for hours at a time and though its funny listening to him. Sometimes it wears on you because it gets annoying. He's been stressed out about getting out of Ad-SEG but when it came time to get transferred now he don't want to leave. As much as I enjoyed this past month with him as my neighbor he has to get ghost because he's driving me crazy. So tonight is his last day here and hopefully I'll have some quiet time for a while. The place where he's being sent to is on of the farthest prisons from his home which is Los Angeles that's why he's upset and anxious and stressing out.

They keep telling him that it may be just temporary so he might be up there on the Nevada border for six months. Man I've still been surprised to learn about that they got all these prisons. When I first came to prison they didn't have but about six prisons across the state. Now they got something like 33 prisons.

I don't know why we can't have lotion around here. Man my skin is all dried up and it's beginning to itch now. They used to have a rule that we couldn't ahve lotion or grease in the SHU but that finally changed last year. So why can't we have it here. This is no different than the SHU. I still believe these folks are making their own rules and disregarding what the statewide property matrix says were entitled to.I'm not sure just how long I will be hanging around this place so I"m not really letting it bother me because it shouldn't be that long. But if I'm going to be here for a while then I damn sure want what I have coming; like a radio. Last night I heard a song on someone's radio "Ebony Eyes" that I ain't heard in many years. Reminds me of a beautiful girl I once knew and she fit that songs description to the letter.

I've done a little drawing, but they didn't give me all my art materials not even my ink pens. Mine are way better than this ink pen they give us here. These are harder to work with and they leak way to frequently. They have this psych-technician walk around here daily and she brings some puzzles crossword puzzles and sudoku puzzles, so I try and do those to kill a little time. I never liked doing them before they never caught my attention but what the hell I'll try it and if I finish it that's good if I don't that's good too.

I don' have any appliance for some reason all I get are excuses as to why they are not issuing out radios like they are suppose to. Plus I was waiting for a radio and still haven't received it and they have a funny style on how they handle property and packages around here. Sometimes they just let it sit out there for weeks but no one complains. Everyone talks bad about the property officer but don't do nothing about it.

They just started doing this thing with some kind of device that they click to the doors. It means that they knock on the door with that device it's like a computerized log or something to show they checked to see what I am doing and they do this check like every 15 minutes and all day and all night. They wake you up if your asleep with all that damn knocking. I've never seen nothing like this and it's driving me crazy.

Tomorrow's yard day and showers, big day on Saturday for me :) yeah I went out to the yard, it was a perfect. The sunshine I think hits the cage I'm in the best I think. I'm usually in that same cell which makes me wonder now that I think about it why is t I'm always in that same cell. Am I being observed closer from that cage? I have no doubt that I'm being watched that I know for sure which is one of the reasons I don't exercise outside. I don't want anyone to think I'm exercising with all the other inmates in the other cages, so I usually do all my exercises in my cell earlier or right before showers. Besides these youngsters wouldn't be able to keep up with me.

Oh yeah I finally got my artwork back from the gang unit the other day. Now I just need to get them copied so I can send them to be posted. Plus I wanted to send some to the Bay View Newspaper too. I think that I'm going to have to get rid of a lot of my drawings because they told me that some of them can be considered as gang related, even though they aren't. But I really don't want to be arguing over that small stuff, although it pisses me off that I can only draw what they allow me to, or that they agree with. So I'm not drawing what I like and what I feel should be expressed. They are giving out violation reports for anything now with this news (STG) program. As soon as I can I will send the artwork.

Ive tried passing my address to some of the pina side hoping theyd pass it to you.
HEY IM SORRY TO HEAR ALL THAT I CAN JUST IMAGINE WHAT YOUR GOING THROUGH. IM REALLY UPSET BECAUSE MY MAN IS IN AD SEG IN HIGH DESERT, AND IM JUST SO CONCERNED AND WORRIED ABOUT HIM KEEP YOUR HEAD UP
(scanned reply – view as blog post)
uploaded Sept. 4, 2016.  Original (PDF) 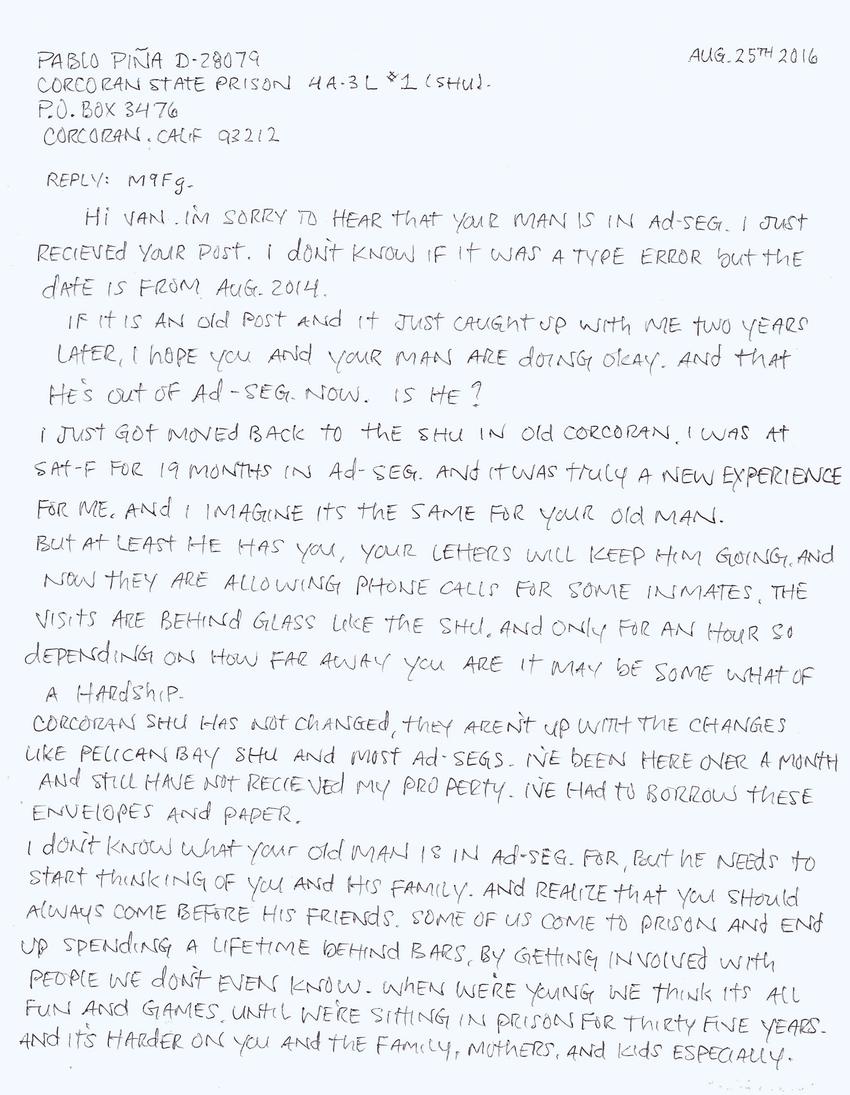 HEY THANKS FOR WRITING BACK, ITS GOOD TO HEAR FROM YOU, STAY UP THO. ANYWAYS I FOUND OUT HE WAS PUT IN AD SEG FOR BATTERY WITH SBI. BUT HE SAID IT WASNT SBI THAT HE IS GOING TO FIGHT IT, BECAUSE HE SAID ALL IT WAS , WAS A FIGHT THAT HE NEVER CAUSE A SBI.
SOME OTHER FOO DID THAT TO HIM, SO I GUESS HE SAID THAT THEY ARE TRYING TO GIVE HIM A SHU TERM, IDK I HOPE HE GETS OUT OF AD SEG ASAP AND IM HOPING HE CAN GET HIS TIME BACK , IDK IF HE WOULD QUALIFY FOR THE NVSS? WHAT DO YOU THINK?
IM SORRY TO HEAR ABOUT YOUR SITUATION, I HOPE EVERYTHING WORKS OUT FOR YOU AND HOPING THAT YOU WILL BE OUT SOON.
(scanned reply – view as blog post)
uploaded Oct. 9, 2016.  Original (PDF) 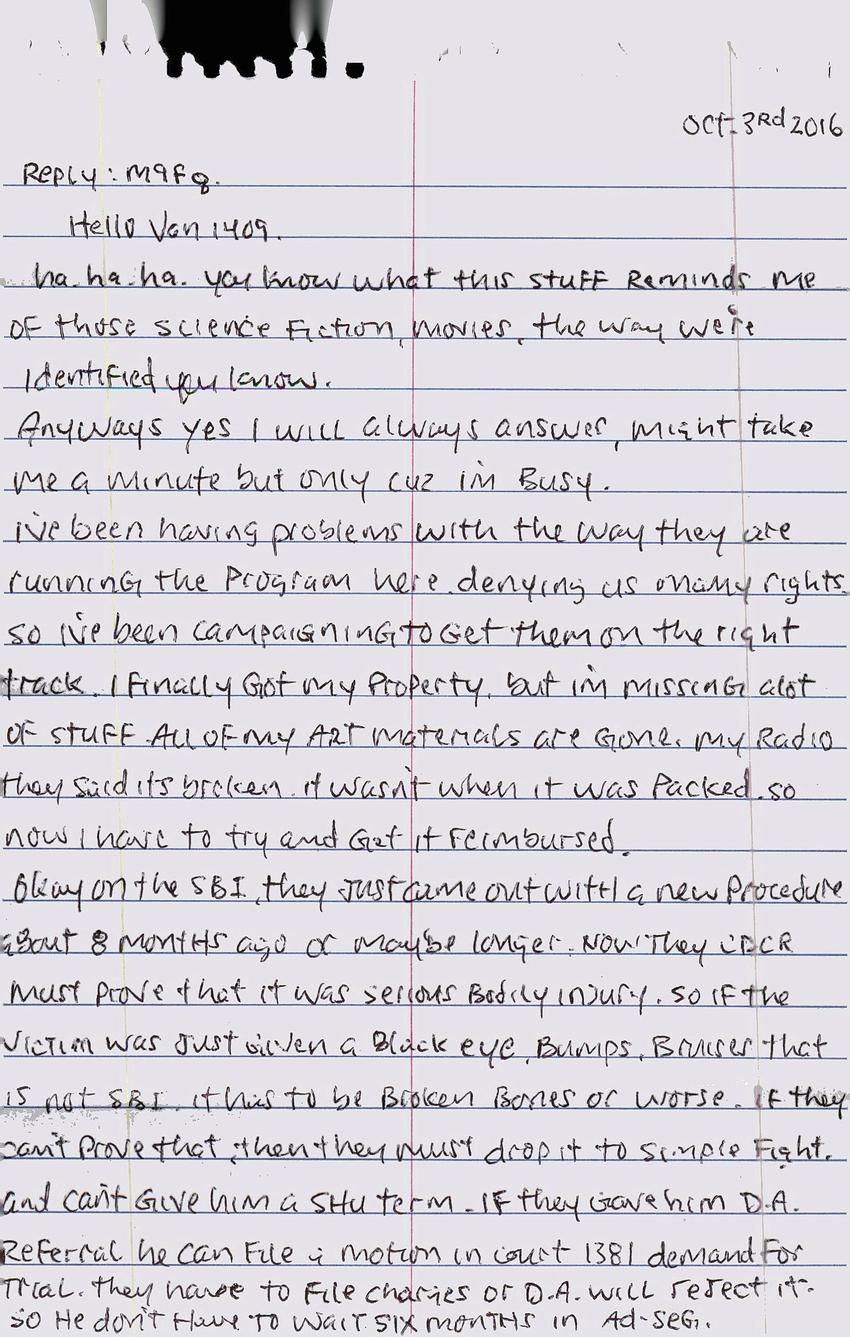