Boxed In and Buried Alive 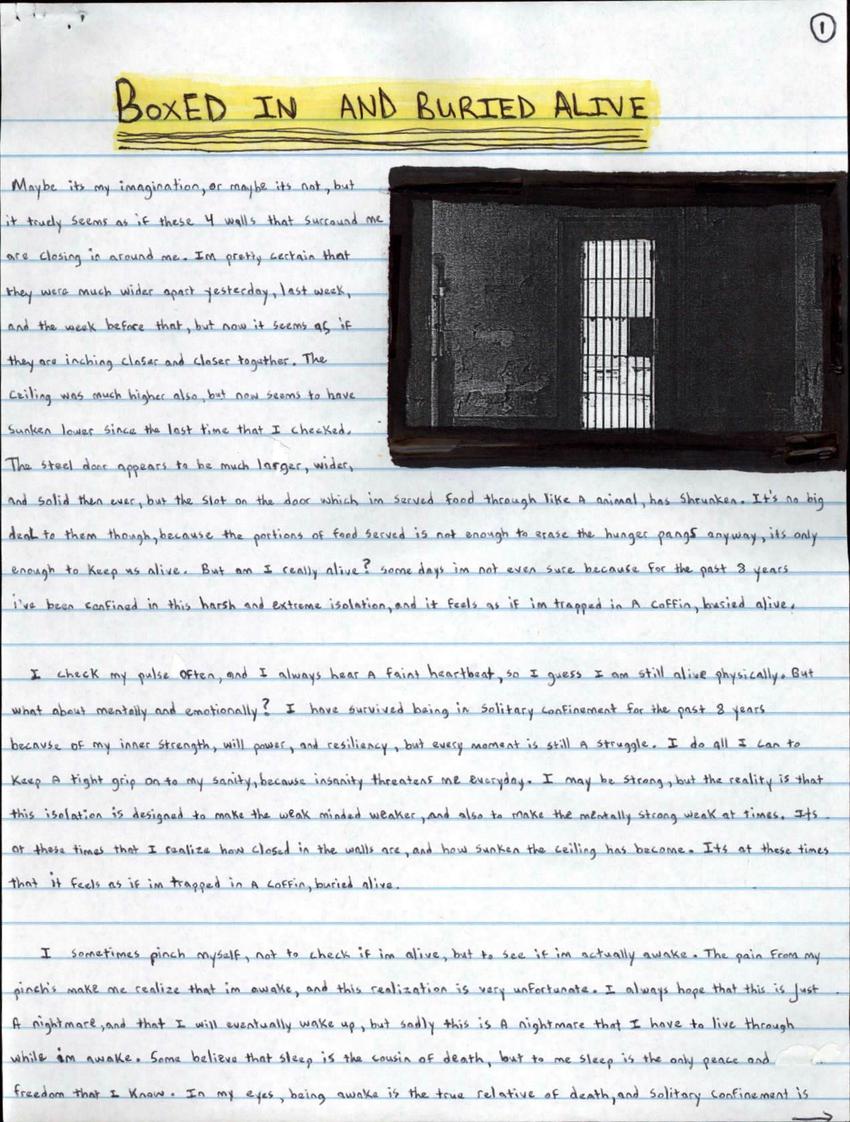 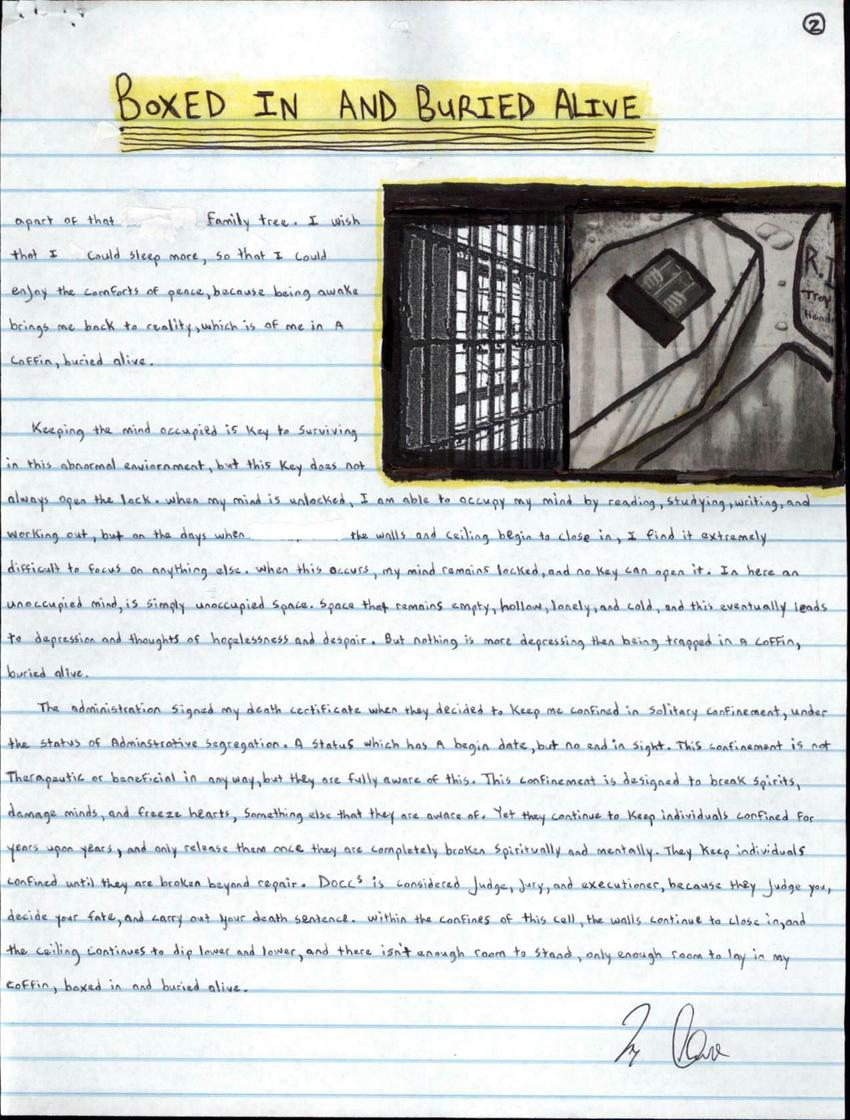 BoxED IN AND BuRIED ALIVE
Maybe its my imagination, or maybe its not, but it truly seems as if these 4 walls that surround me are closing in around me. I am pretty certain that they were much wider apart yesterday, last week, and the week before that, nut now it seems as if the are inching closer and closer together. The ceiling was much higher also, but now seems to have sunken lower since the last time that i checked. The steel door appears to be much larger, wider, and solid than ever, but the slot on door which im served food through like a animal, has shrunken. Its no big deal to them though, because the portions of food served is not enough to erase the hunger pains anyways, its only enough to keep us alive. But am i really alive? Some days im not even sure because for the past 3 years i've been confined in this harsg and extreme isolation, and it feels as if im trapped in a coffin, buried alive,
I check my pulse often, and i always hear a faint heartbeat, so i guess i am still alive physically. But what about mentally and emotionally? I have survived being in solitary confinement for the past 8 years because of my inner strength, will power, and resiliency, but every moment is still a struggle. I do all i can to keep a tight grip on my sanity, because insanity threatens me everyday. I may be strong, but the reality is that this isolation is designed to make the weak minded weaker, and also to make the mentally strong weak at times. Its on these times that i realize how closed in the walls are and how sunken the ceiling has become. Its at these times i feel as if i am trapped in a coffin, buried alive.
I sometimes pinch myself, not to check if i am alive, but to see if im actually awake. The pain from my pinch's make me realize that im awake and that this realization is very unfortunate. I always hope that this is just a nightmare, and that i will eventually wake up, but sadly this is a nightmare that i have to live through while im awake. Some believe that sleep is the cousin of death, but to me sleep is the only peace and freedom that i know. In my eyes , being awake is the true relative of deal, and solitary confinement is apart of that family tree. I wish that i could sleep more, so that i could enjoy the comforts of peace, because being awake brings me back to reality, which is of me in a coffin, buried alive.
Keeping the mind occupied is the key to surviving in this abnormal environment, but this key does not always open the lock. When my mind is unlocked, i am able to occupy my mind by reading, studying, writing and working out, but on the days when the walls and ceiling begin to close in, I find it extremely difficult to focus on anything else. When this occurs, my mind remains locked, and no key can open it. In here an unoccupied mind, is simply unoccupied space. Space that remains empty, hollow, lonely and cold and this eventually leads to depression and thoughts of hopelessness and despair. But nothing is more depressing then being trapped in a coffin, buried alive.
The administration signed my death certificate when they decided to keep me confined in solitary confinement, under the status of administrative segregation. A status which has a begin date, but no end in sight. This confinement is not therapeutic or beneficial in any way, but they are fully aware of this. This confinement is designed to break spirits, damage minds and freeze hearts, something else that they are aware of. Yet they continue to keep individuals confined for years upon years, and only release them once they are completely broken spiritually and mentally. The keep individuals confined until they are broken beyond repair. Docc is considered judge, jury, and executioner, because they judge you, decide your fate, and carry out your death sentence. Within the confines of this cell, the walls continue to close in, and the ceiling continues to dip lower, and there isn't enough room to stand, only enough room to lay in my coffin, boxed in and buried alive.

Thanks for writing! I finished the transcription for your post. And I enjoyed reading it. I feel terrible knowing your caged in and though I am sure have done something to put yourself in prison i don't think you deserve to feel the way you write in your post. I hope you find constructive things to do with your time and i hope you know that your words are reaching people on the other side of the country and the world. Your strong enough to get through anything and i know you'll make it through your time. Keep your head up and try to focus more on your writing and less on the coffin !
Judge, jury, and executioner! I'm sure your story is a parallel to how Romona Moore felt during her imprisonment and torture........except her outcome didn't end so well!
First of all my husband writes so profoundly and the raw emotion can be felt. Let us not judge the innocent, as Troy did not and never could do what is alleged. Judge, jury, and executioner Got It Wrong! Working everyday to exonerate my hubby. With our love we shall survive thus miscarriage of justice!
Dear Troy, I'm not sure whether you are still in administrative confinement but I pray to God that you are not. Recently the horrors of solitary confinement in this country have come to my attention it has grabbed my life by the throat. Not many people are aware of the dehumanizing torture that happens in prisons for years and years with no one policing them and telling them to stop it. I'm planning to start a protest at my school against solitary confinement but my lack of knowledge of the prison world leaves me blind to what exactly goes on. I pray that your soul is finding peace because you seem to be a beautiful and pure human being from your writings. The system uses solitary to break away at a humans spirit and only the truly strong can attempt to maintain it. Your strength is infinite and is stronger than the concrete walls. They may have confined you physically but your beauty and strength has pervaded beyond those walls. The universe watches over you every day and every night and the sun the skies and stars are watching over you. May your heart find strength and peace through all the oppression.
--peace and love
Tanvi Mongia
"You are going to be confined to a place where there is no love, where there is no compassion, which is cold and loveless, and you will be consigned to that place for a very long time."

Do you remember the words of Justice Tomei?

The beautiful and pure human beings were his victims who were tortured, raped and murdered. There can be little peace until the crime is acknowledged. All we will see is a pity party and no mention of those young women.

It's not the sun the skies and stars are watching over him.........it's the CO's that are keeping others safe.
He was wrongly convicted
You don't know the guy............you don't know the case. Because of some honeyed words you have decided he's innocent. I believe you are the innocent one and can't see the fact that he is running game on naïve people. 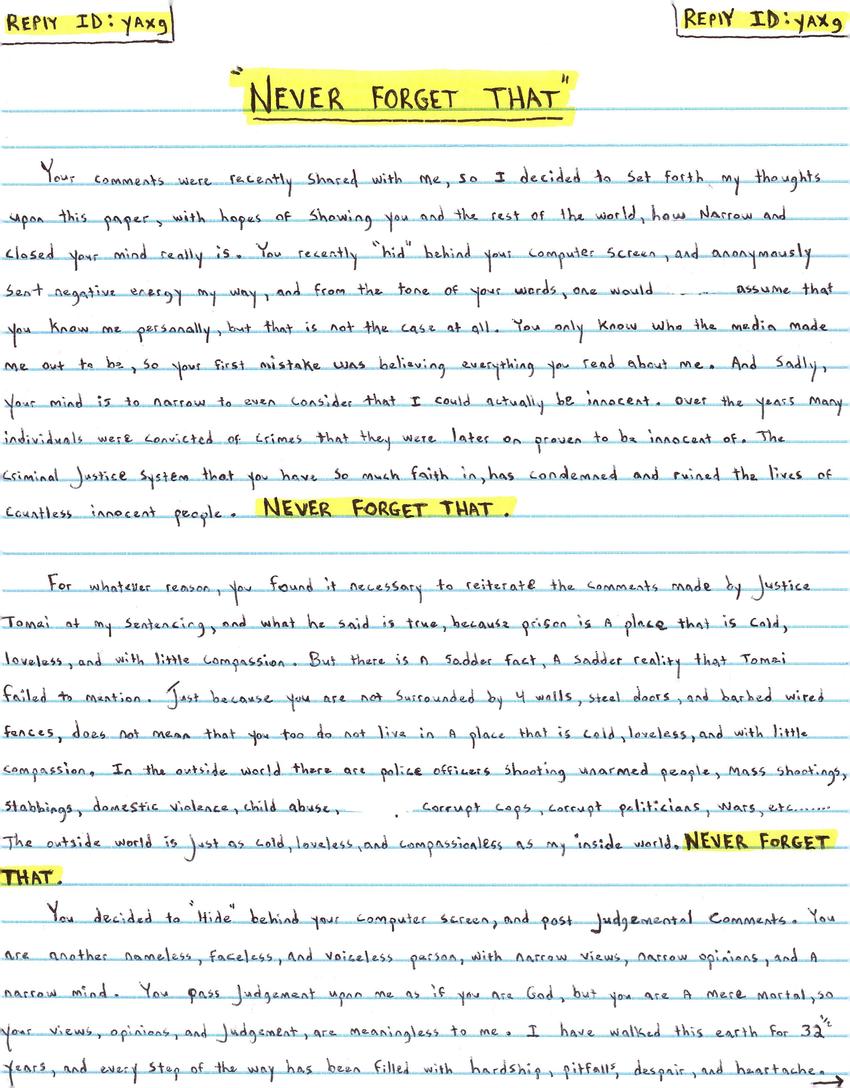 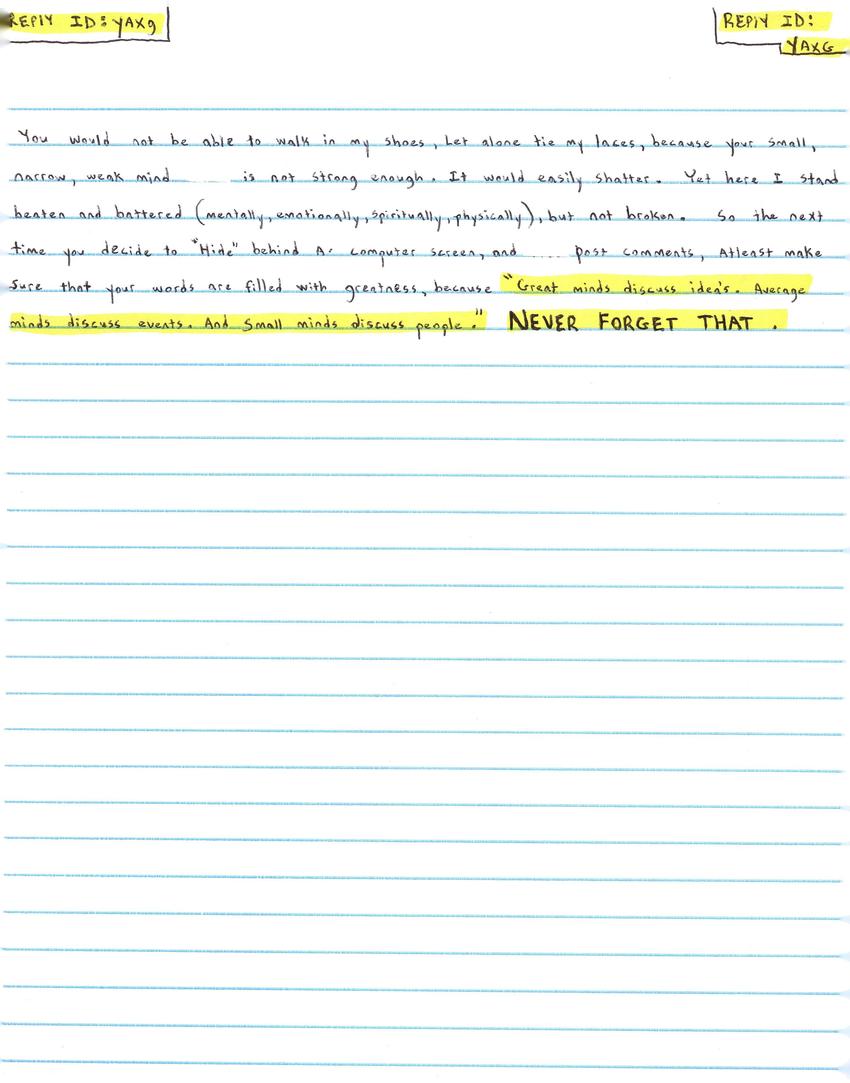 Do you know the guy? Do you know the case Mr. Judgmental? Or are you just reading into what "they" say and speculating his guilt? Troy is innocent. I feel sorry for you because you cannot see past your own judgment, privilege, and narrow mindedness. To the contrary, Troy is loved, there is yet warmth and compassion that surround him, even in a place so cruel where he doesn't belong! There is No pity party, as that's not in his DNA, but rather a fight for innocence. The Only acknowledgement needed is that he's innocent and wrongly convicted!!! Yet God is watching over him, and he will be freed from the prison designed to break him, as his innocence shall be proved. Furthermore, the COs aren't keeping anyone safe, they are abusing authority! Your teeth are a cage for your tongue, remember that!
Speak more about your innocence. I would love to assist. Innocence project works. Trust the process
Hey Troy!! I tried to reply on the original boxed in and buried alive post, I like what you said about dreams being peaceful and relaxing. It’s like your own little escape/adventure. What do you dream about? Have you ever tried to lucid dream and control your dreams? I tried once but I was only able to make a dinosaur appear behind a vending machine. I’m not very good at it. What has been your favorite dream? One you go back to? By the way! I saw you have a wife/girlfriend (or maybe a super fan or maybe both! (: ), I have a boyfriend so I’m asking all this purely as a friend. Have a good productive day as always!
(scanned reply – view as blog post)
uploaded Jan. 6, 2019.  Original (PDF) 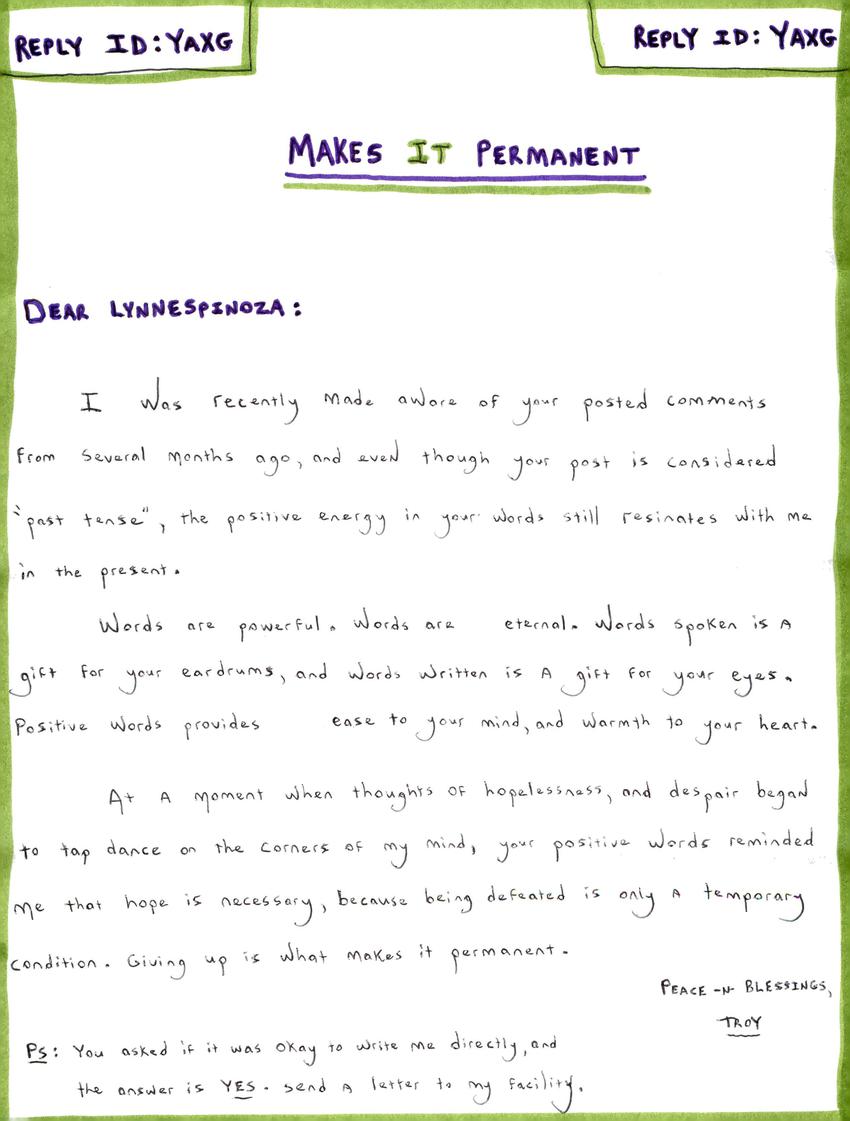 Do you remember the words of Justice Tomei?

"you will be consigned to that place for a very long time."

You have still not acknowledged the crime and Romona Moore is still looking down!

Paul
ToyToy Posted 6 years ago. ✓ Mailed 6 years ago Favorite
Do you know the guy? Do you know the case Mr. Judgmental? Or are you just reading into what "they" say and speculating his guilt? Troy is innocent. I feel sorry for you because you cannot see past your own judgment, privilege, and narrow mindedness. To the contrary, Troy is loved.....

Romona Moore was loved too. Romona Moore had family and friends that loved her that can't write her that miss her that are reminded with every birthday that she is gone. All thanks to Mr. Hendrix.