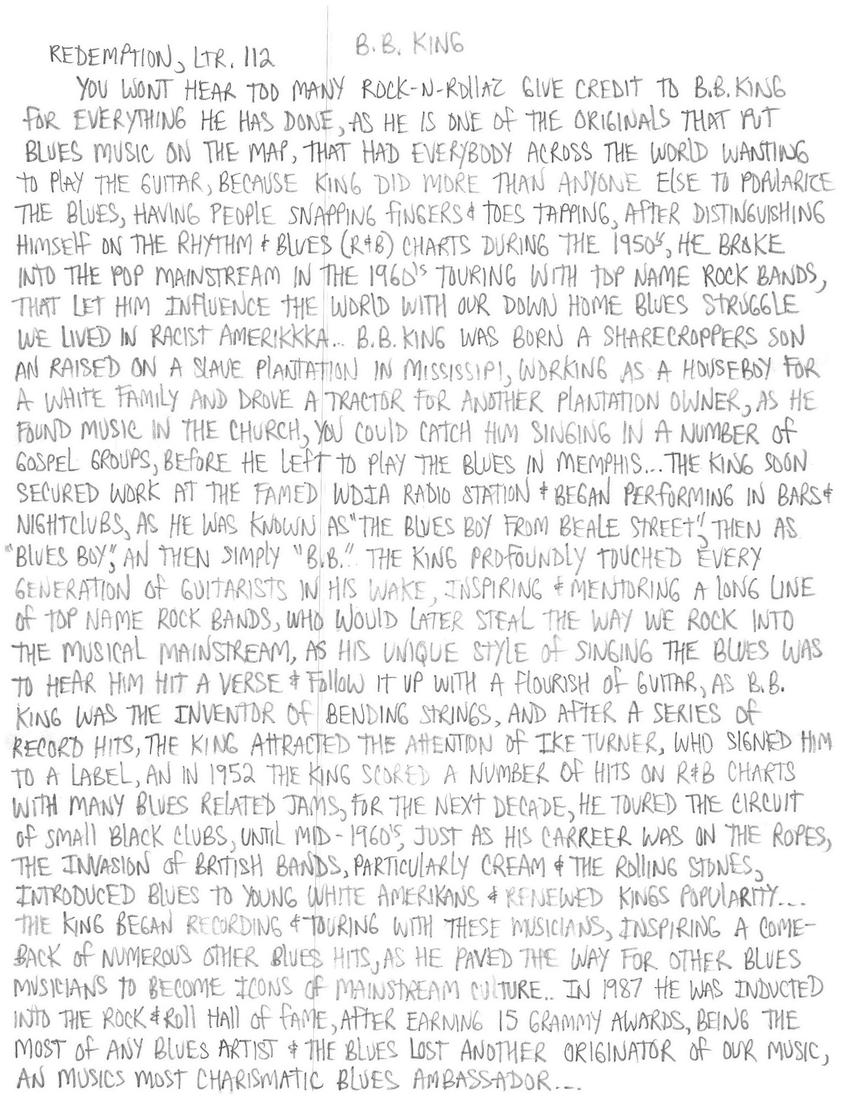 You won't hear too many rock-n-rollaz give credit to B.B. King for everything he has done, as he is one of the originals that put blues music on the map that had everybody across the world wanting to play the guitar. Because King did more than anyone else to popularize the blues, having people snapping fingers & toes tapping. After distinguishing himself on the rhythm & blues (R&B) charts during the 1950s, he broke into the pop mainstream in the 1960s touring with top name rock bands. That let him influence the world with our down home blues struggle we lived in racist AmeriKKKa.

B.B. King was born a sharecropper's son an' raised on a slave plantation in Mississippi, working as a houseboy for a white family and drove a tractor for another plantation owner. As he found music in the church, you could catch him singing in a number of gospel groups before he left to play the blues in Memphis. The King soon secured work at the famed WDIA radio station & began performing in bars & nightclubs. As he was known as "The Blues Boy from Beale Street", then as "Blues Boy", an' then simply as "B.B." The King profoundly touched every generation of guitarists in his wake, inspiriting & mentoring a long line of top name rock bands who would later steal the way we rock into the musical mainstream. As his unique style of singing the blues was to hear him hit a verse & follow it up with a flourish of guitar, as B.B. King was the inventor of bending strings.

And after a series of record hits, the King attracted the attention of Ike Turner who signed him to a label an' in 1952, the King scored a number of hits on R&B charts with many blues related jams. For the next decade, he toured the circuit of small black clubs until mid-1960s. Just as his career was on the ropes, the invasion of British bands (particularly Cream & The Rolling Stones) introduced blues to young white Amerikans & renewed King's popularity. The King began recording & touring with these musicians, inspiring a comeback of numerous other blues hits, as he paved the way for other blues musicians to become icons of mainstream culture.

In 1987, he was inducted into the Rock & Roll Hall of Fame after earning 15 Grammy Awards, being the most of any blues artist & the blues lost another originator of our music an' music's most charismatic blues ambassador.