When did you first realize that you had become grown up? 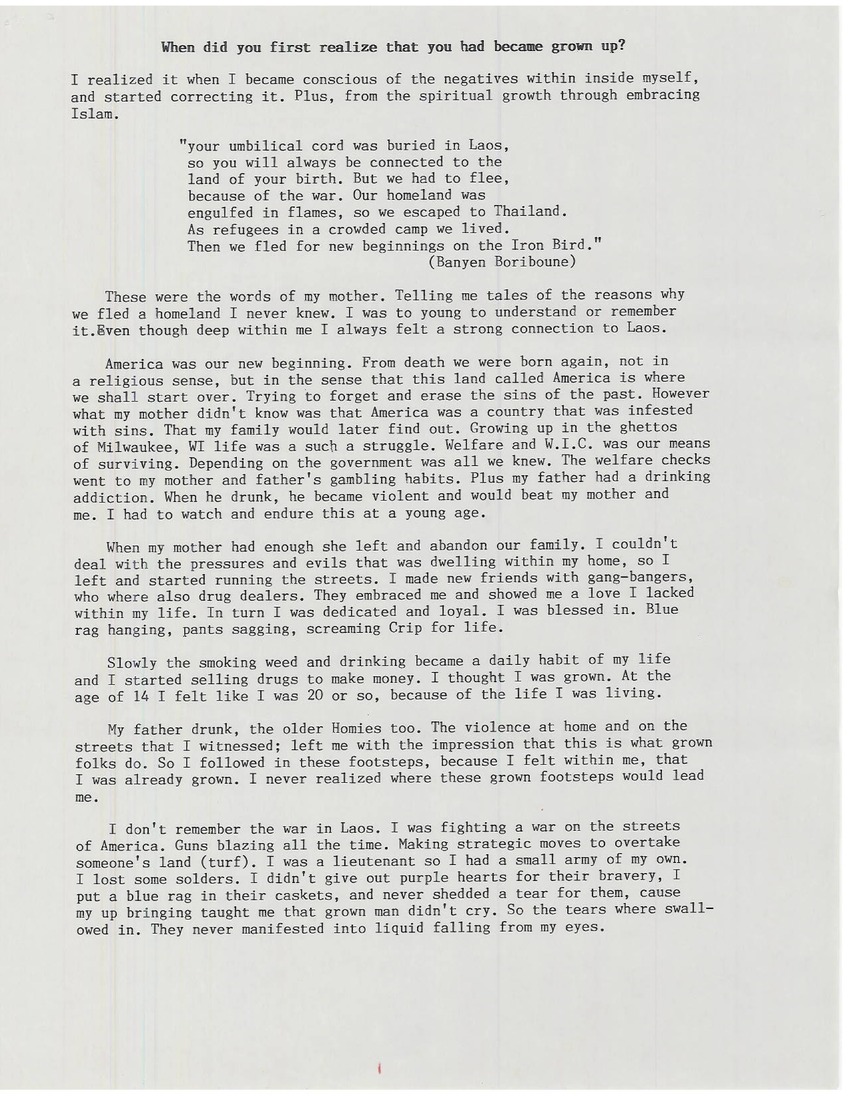 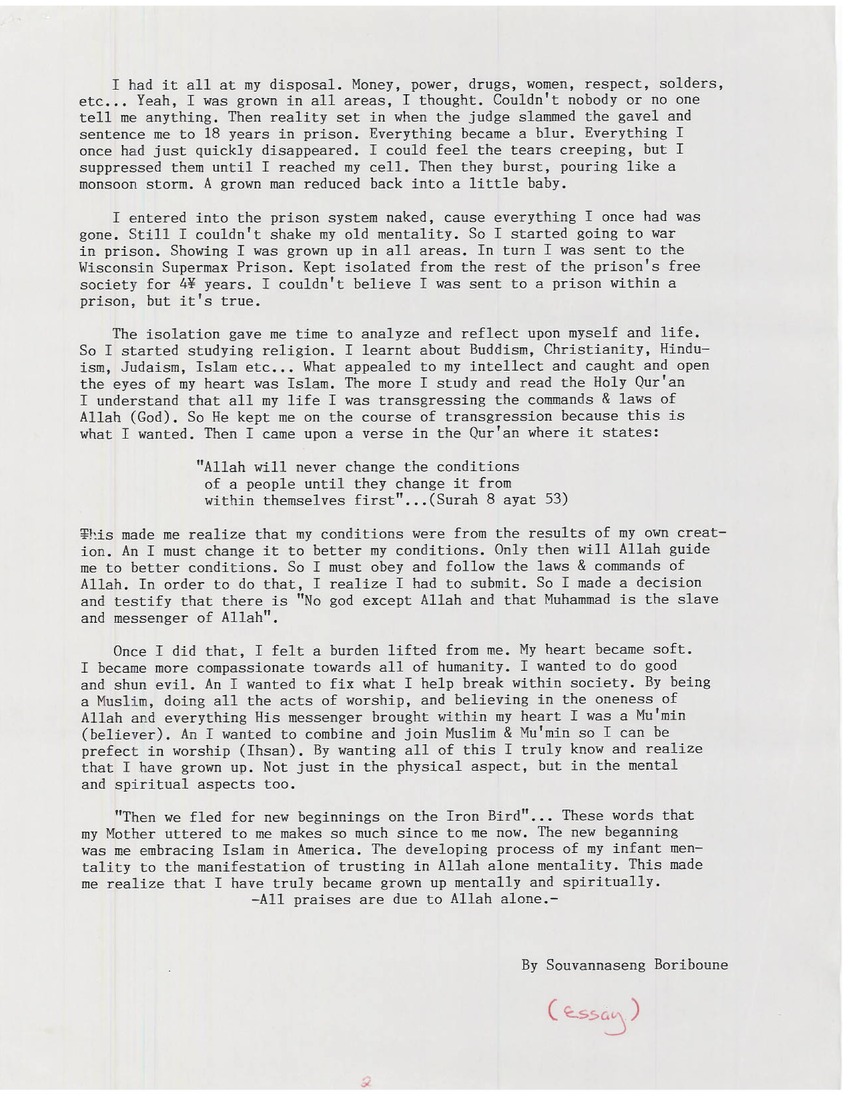 When Did You First Realize That You Had Grown Up?

I realized it when I became conscious of the negatives within myself and started correcting it> plus from the spiritual growth through embracing Islam.

"your umbilical cord was buried in Laos,
so you will always be connected to the
land of your birth. But we had to flee,
because of the war. Our homeland was
engulfed in flames, so we escaped to Thailand.
As refugees in a crowded camp we lived.
Then we fled for new beginnings on the Iron Bird."
(Banyen Boriboune)

These were the words of my mother. Telling me tales of the reasons why we fled a homeland I never knew. I was too young to understand or remember it. Even though deep within me, I always felt a strong connection to Laos.

America was our new beginning. From death we were born again, not in a religious sense, but in the sense that this land called America is where we shall start over. Trying to forget and erase the sins of the past. However, what my mother didn't know was that America was a country that was infested with sins. WI life was such a struggle. Welfare and W.I.C. was our means of surviving. Depending on the government was all we knew. The welfare checks went to my mother and father's gambling habits. Plus my father had a drinking addiction. When he drunk, he became violent and would beat my mother and me. I had to watch and endure this at a young age.

When my mother had enough she left and abandoned our family. I couldn't deal with the pressure and evils that were dwelling in my home, so I left and started dunning the streets. I made new friends with gang-bangers who were also drug dealers. They embraced me and showed me a love I lacked within my life. In turn I was addicted and loyal. I was blessed in. Blue rag hanging, pants sagging, screaming Crip for life.

Slowly the smoking weed and drinking became a daily habit of my life and I started selling drugs to make money. I thought I was grown. At the age of 14, I felt like I was 20 or so because of the life I was living.

My father drunk, the older homies too. The violence at home and on the streets that I witnessed left me with the impression that this is what grown folks do. So I followed in these footsteps because I felt within me that I was already grown. I never realized where these grown footsteps would lead me.

I don't remember the war in Laos. I was fighting a war on the streets of America. Guns blazing all the time. Making strategic moves to overtake someone's land (turf). I was a lieutenant so I had a small army of my own. I lost some soldiers. I didn't give out purple hearts for their bravery, I put a blue rag in their caskets and never shed a tear for them. 'Cause my upbringing taught me that grown men don't cry. So the tears were swallowed up. They never manifested into liquid falling from my eyes.

I had it all at my disposal: money, power, drugs, women, respect, soldiers, etc.... Yeah, I was grown in all areas, I thought. Couldn't nobody or no one tell me anything. Then reality set in when the judge slammed the gavel and sentenced me to 18 years in prison. Everything became a blur. Everything I once had just quickly disappeared. I could feel the tears creeping but I suppressed them until I reached my cell. Then they burst, pouring like a monsoon storm. A grown man reduced back into a little baby.

I entered the prison system naked 'cause everything I once had was gone. Still, I couldn't shake my old mentality. So I started going to war in prison. Showing I was grown up in all areas. I turn I was sent to the Wisconsin Supermax Prison, kept isolated from the rest of the prison's free society for four years. I couldn't believe I was sent to a prison within a prison, but it's true.

The isolation gave me time to analyze and reflect upon myself and life. So I started studying religion. I learned about Buddhism, Christianity, Hinduism, Judaism, Islam, etc. What appealed to my intellect and caught and opened the eyes of my heart was Islam. The more I studied and read the Holy Qur'an I understood that all my life I was transgressing the commands and laws of Allah (God). So He kept me on the course of transgression because this is what I wanted. Then I came upon a verse in the Qur'an where it states:

"Allah will never change the conditions
of a people until they change it from
within themselves first..." (Surah 8, ayat 53)

This made me realize that my conditions were from the results of my own creation and I must change it to better my conditions. Only then will Allah guide me to better conditions. So I must obey and follow the laws and commands of Allah. In order to do that, I realize that I had to submit. So I made a decision and testify that there is "No god except Allah and that Muhammed is the slave and messenger of Allah."

Once I did that, I felt a burden lifted from me. My heart became soft. I became more compassionate towards all of humanity. I wanted to do good and shun evil, and I wanted to fix what I help break within society. By being a Muslim, doing all the acts of worship and believing in the oneness of Allah and everything His messenger brought within my heart, I was a Mu'min (believer). And I wanted to combine and join Muslim and Mu'min so I can be perfect in worship (Ihsan). By wanting all of this, I truly know and realize that I have grown up. Not just in the physical aspect, but in the mental and spiritual aspects too.

"Then we fled for new beginnings on the Iron Bird..." These words that my mother uttered to me makes so much sense to me now. The new beginning was me embracing Islam in America. The developing process of my infant mentality to the manifestation of trusting in Allah alone mentality. This made me realize that I have truly grown up mentally and spiritually.

—All praises are due to Allah alone.—