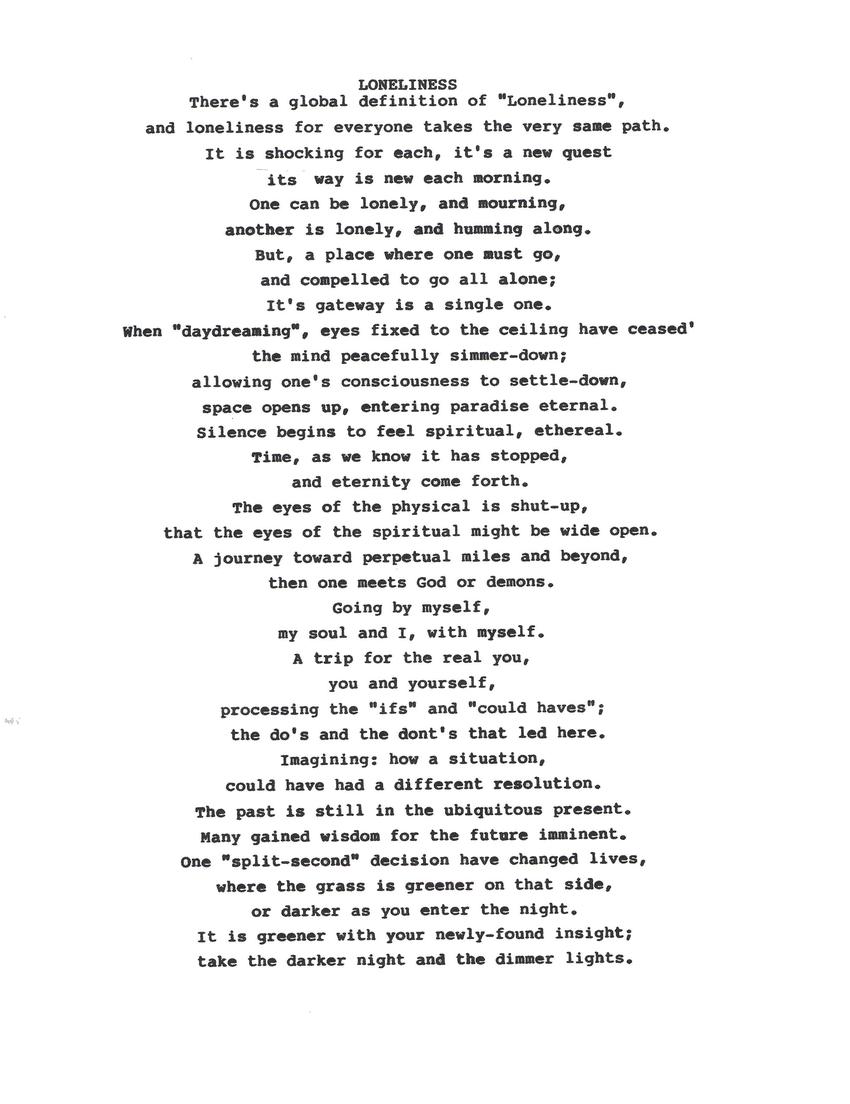 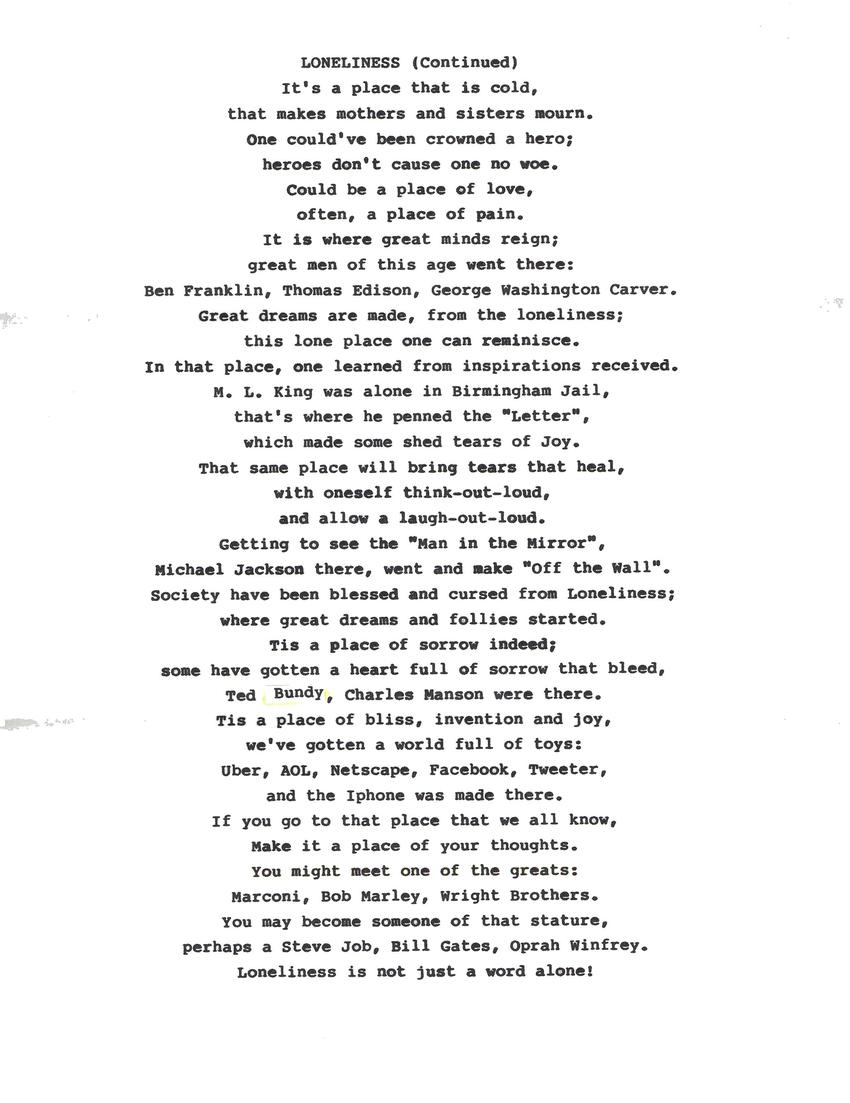 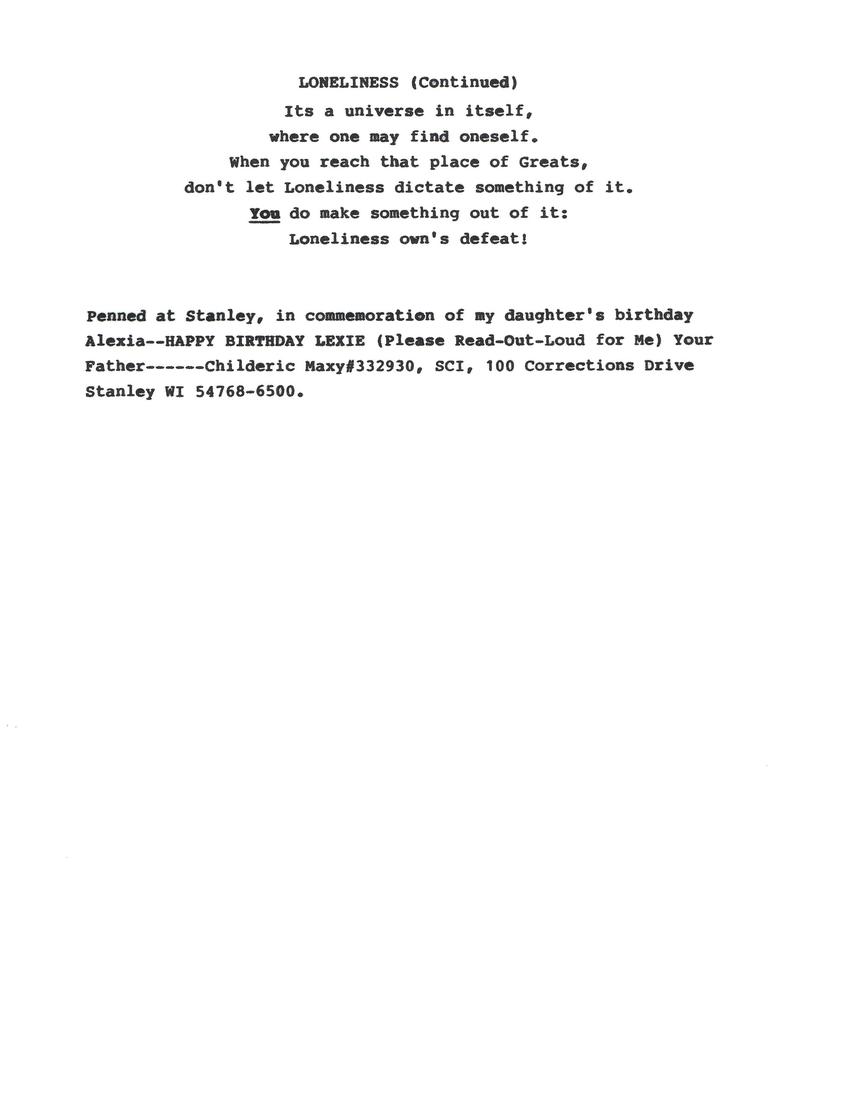 There's a global definition of "Loneliness",
and lionliness for everyone takes the very same path.
It is shocking for each, it's a new quest
its way is new each morning.
One can be lonely, and humming along.
But, a place where one must go,
and compelled to go all alone;
It's gateway is a single one.
When "daydreaming", eyes fixed to the ceiling have ceased'
the mind peacefully simmer-down;
allowing one's consciousness to settle-down,
space opens up, entering paradise eternal.
Silence begins to feel spiritual, ethereal.
Time, as we know it has stopped,
and eternity come forth.
The eyes of the physical is shut-up,
that the eyes of the spiritual might be wide open.
A journey toward perpetual miles and beyond,
then one meets God or demons.
Going by myself,
my soul and I, with myself.
A trip for the real you,
you and yourself,
processing the "ifs" and "could haves";
the do's and the don'ts that led here.
Imagining: how a situation,
could have had a different resolution.
The past is still in the ubiquitous present.
One "split-second" decision have changed lives,
where the grass is greener on that side,
or darker as you enter night.
It is greener with your newly-found insight;
take the darker night and the dinner lights.

Its a place that is cold,
that makes mothers and sisters mourn.
One could've been crowned a hero;
heroes don't cause one no woe.
Could be a place to love,
often, a place of pain.
It is where great minds reign;
great men of this age went there;
Ben Franklin, Tomas Edison, George Washington Caver.
Great dreams are made, from the loneliness;
this lone place one can reminisce.
In that place, one learned from inspirations received.
M. L. King was alone in Birmingham Jail,
that's where he penned the "Letter",
which made some shed tears of Joy.
That same place will bring tears that heal,
with oneself think-out-loud
and allow a laugh-out-loud.
Getting to see the "Man in the Mirror",
Michael Jackson there, went and make "Off the Wall".
Society have been blessed and curse from Loneliness;
where great dreams and follies started.
Tis a place of sorrow indeed;
some have gotten a heart full of sorrow that bleed,
Ted Bundy, Charles Manson were there.
Tis a place of bliss, invention and joy,
we've gotten a world full of toys:
Uber , aol, Netscape, Facebook, Twitter,
and Iphone was made there.
If you go to that place that we all know,
Make it a place of your thoughts.
You might need one of the Great;
Marconi, Bob Marley, Wright Brothers.
You may become someone of that stature,
perhaps a Steve Job, Bill Gates, Oprah Winfrey.
Loneliness is not just a word alone!

Its a universe in itself,
where one may find oneself.
When you reach that place of Greats,
don't let loneliness dictate something of it.
YOU do make something out of it:
Loneliness owns defeat!