A Call To Action: 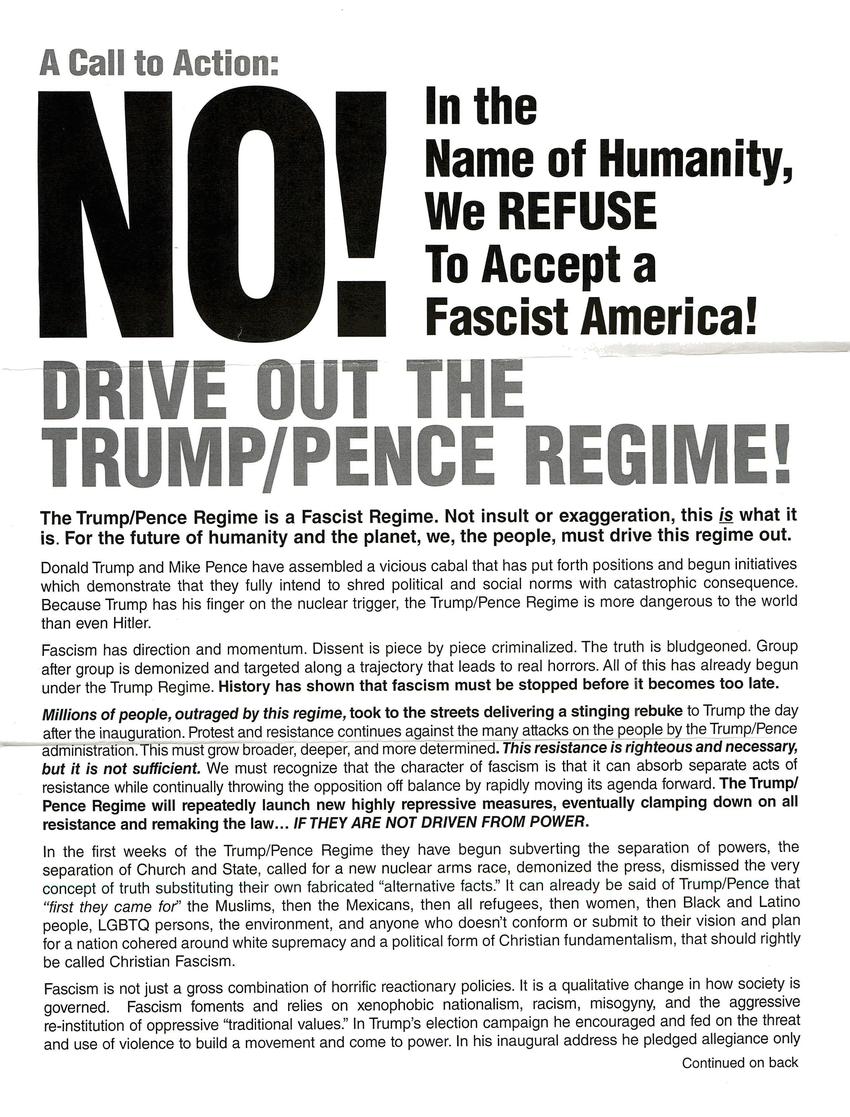 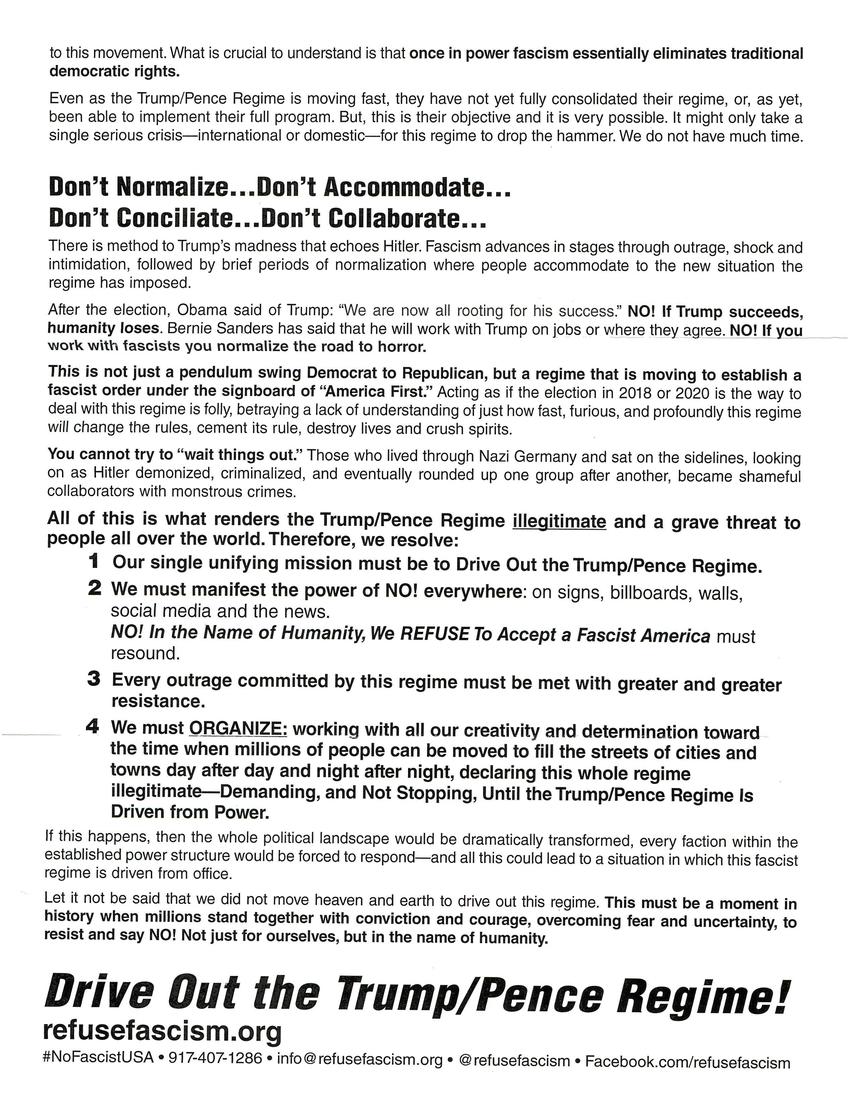 A Call to Action:
NO!
In the Name of Humanity, We REFUSE To Accept a Fascist America!

DRIVE OUT THE TRUMP/PENCE REGIME!

The Trump/Pence Regime is a Fascist Regime. Not insult or exaggeration, this is what it is. For the future of humanity and the planet, we, the people, must drive this regime out.

Donald Trump and Mike Pence have assembled a vicious cabal that has put forth positions and begun initiatives which demonstrate that they fully intent to shred political and social norms with catastrophic consequence. Because Trump has his finger on the nuclear trigger, the Trump/Pence Regime is more dangerous to the world that even Hitler.

Fascism has direction and momentum. Dissent is piece by piece criminalized. The truth is bludgeoned. Group after group is demonized and targeted along a trajectory that leads to real horrors. All of this has already begun under the Trump Regime. History has shown that fascism must be stopped before it becomes too late.

Millions of people, outraged by this regime, took to the street delivering a stinging rebuke to Trump the day after the inauguration. Protest and resistance continues against the many attacks on the people by the Trump/Pence administration. This must grow broader, deeper, and more determined. This resistance is righteous and necessary, but it is not sufficient. We must recognize that the character of fascism is that it can absorb separate acts of resistance while continually throwing the opposition off balance by rapidly moving its agenda forward. The Trump/Pence Regime will repeatedly launch new highly repressive measures, eventually clamping down on all resistance and remaking the law... IF THEY ARE NOT DRIVEN FROM POWER.

In the first weeks of the Trump/Pence Regime they have begun subverting the separation of powers, the separation of Church and State, called for a new nuclear arms race, demonized the press, dismissed the very concept of truth substituting their own fabricated "alternative facts." It can already be said of Trump/Pence that "first they came for" the Muslims, then the Mexicans, then all refugees, then women, then Black and Latino people, LGBTQ persons, the environment, and anyone who doesn't conform or submit to their vision and plan for a nation cohered around white supremacy and a political form of Christian fundamentalism, that should rightly be called Christian Fascism.

Fascism is not just a gross combination of horrific reactionary policies. It is a qualitative change in how society is governed. Fascism foments and relies on xenophobic nationalism, racism, misogyny, and the aggressive re-institution of oppressive "traditional values." In Trump's election campaign he encouraged and fed on the threat and use of violence to build a movement and come to power. In his inaugural address he pledged allegiance only to this movement. What is crucial to understand is that once in power fascism essentially eliminates traditional democratic rights.

Even as the Trump/Pence Regime is moving fast, they have not yet fully consolidated their regime, or, as yet, been able to implement their full program. But, this is their objective and it is very possible. It might only take a single serious crisis - international or domestic - for this regime to drop the hammer. We do not have much time.

There is method to Trump's madness that echoes Hitler. Fascism advances in stages through outrage, shock and intimidation, followed by brief periods of normalization where people accommodate to the new situation the regime has imposed.

After the election, Obama said of Trump: "We are now all rooting for his success." NO! If Trump succeeds, humanity loses. Bernie Sanders has said that he will work with Trump on jobs or where they agree. NO! If you work with fascists you normalize the road to horror.

This is not just a pendulum swing Democrat to Republican, but a regime that is moving to establish a fascist order under the signboard of "American First." Acting as if the election in 2018 or 2020 is the way to deal with this regime is folly, betraying a lack of understanding of just how fast, furious, and profoundly this regime will change the rules, cement its rule, destroy lives and crush spirits.

You cannot try to "wait things out." Those who lived through Nazi Germany and sat on the sidelines, looking on as Hitler demonized, criminalized, and eventually rounded up one group after another, became shameful collaborators with monstrous crimes.

All of this is what renders the Trump/Pence Regime illegitimate and a grave threat to people all over the world. Therefore, we resolve:
1 Our single unifying mission must be to Drive Out the Trump/Pence Regime.
2 We must manifest the power of NO! everywhere: on signs, billboards, walls, social media and the news.
NO! In the Name of Humanity, We REFUSE To Accept a Fascist America must resound.
3 Every outrage committed by this regime must be met with greater and greater resistance.
4 We must ORGANIZE: working with all our creativity and determination toward the time when millions of people can be moved to fill the streets of cities and towns day after day and night after night, declaring this whole regime illegitimate - Demanding, and Not Stopping, Until the Trump/Pence Regime Is Driven from Power.

If this happens, then the whole political landscape would be dramatically transformed, every faction within the established power structure would be forced to respond - and all this could lead to a situation in which the fascist regime is driven from office.

Let it not be said that we did not move heaven and earth to drive out this regime. This must be a moment in history when millions stand together with conviction and courage, overcoming fear and uncertainty, to resist and say NO! Not just for ourselves, but in the name of humanity.