Do Not Feed the Birds! 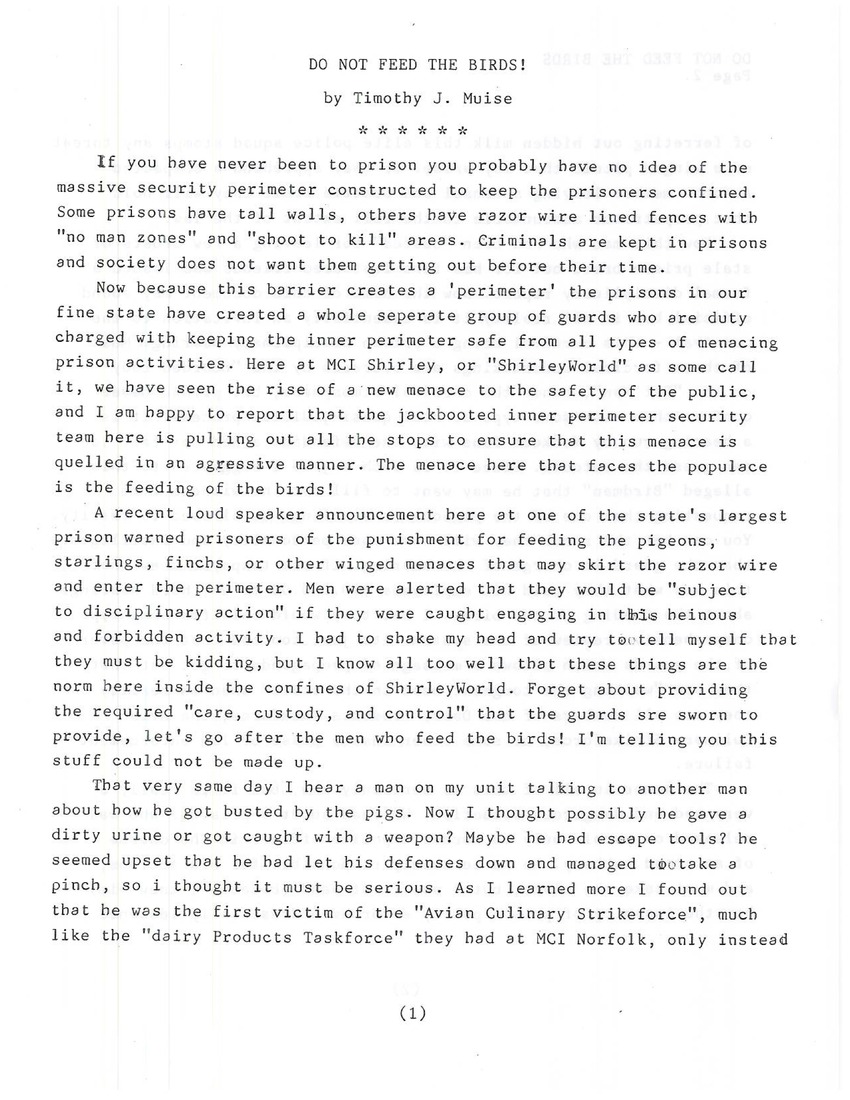 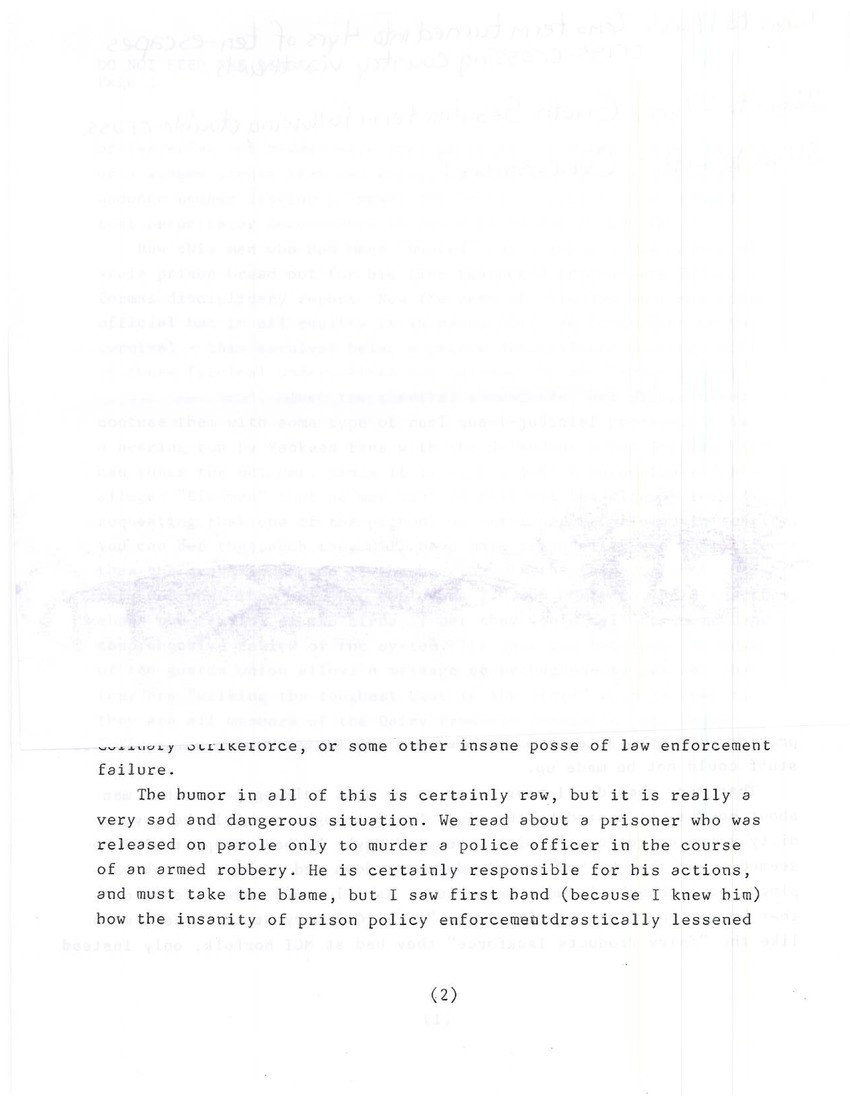 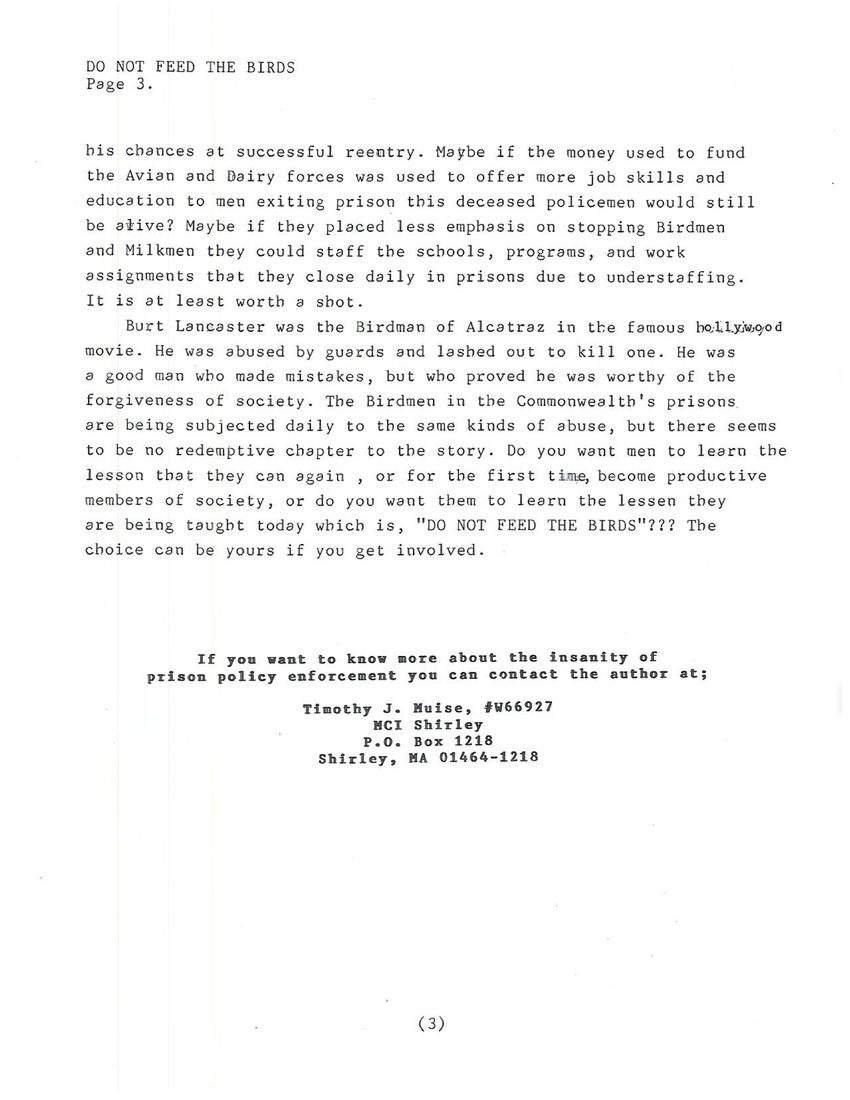 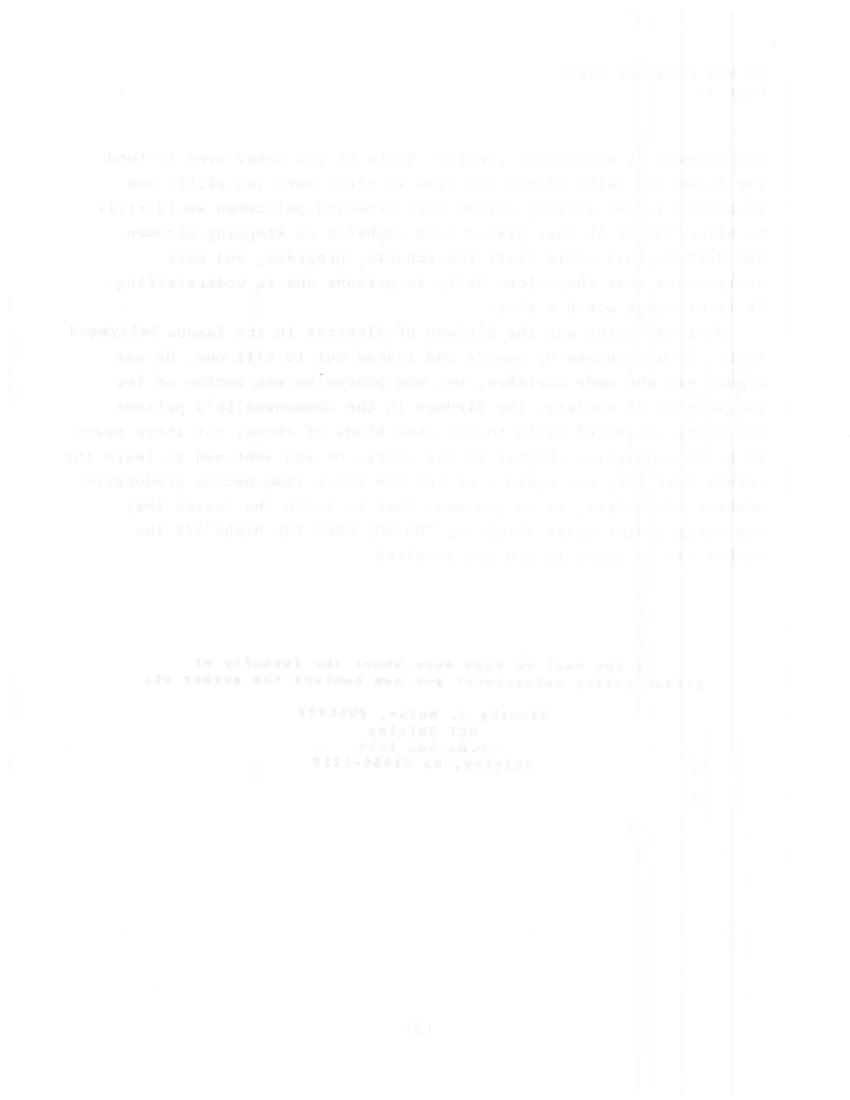 DO NOT FEED THE BIRDS!
by Timothy J. Muise

If you have never been to prison you probably have no idea of the massive security perimeter constructed to keep the prisoners confined. Some prisons have tall walls, others have razor wire lined fences with "no man zones" and "shoot to kill" areas. Criminals are kept in prisons and society does not want them getting out before their time.

Now because this barrier creates a 'perimeter' the prisons in our fine state have created a whole separate group of guards who are duty charged with keeping the inner perimeter safe from all types of menacing prison activities. Here at MCI Shirley, or "ShirleyWorld" as some call it, we have seen the rise of a new menace to the safety of the public, and I am happy to report that the jackbooted inner perimeter security team here is pulling out all the stops to ensure that this menace is quelled in an aggressive manner. The menace here that faces the p0opulace is the feeding of the birds!

A recent loud speaker announcement here at one of the state's largest prisons warned prisoners of the punishment for feeding the pigeons, sterlings, finches, or other winged menaces that may skirt the razor wire and enter the perimeter. Men were alerted that they would be "subject to disciplinary action" if they were caught engaging in this heinous and forbidden activity. I had to shake my head and try to tell myself that they must be kidding, but I know all too well that these things are the norm here inside the confines of ShirleyWorld. Forget about providing the required "care, custody, and control" that the guards are sworn to provide, let's go after the men who feed the birds! I'm telling you this stuff could not be made up.

That very same day I hear a man on my unit talking to another man about how he got busted by the pigs. Now I thought possibly he gave a dirty urine or got caught with a weapon? Maybe he had escape tools? He seemed upset that he had let his defenses down and managed to take a pinch, so I thought it must be serious. As I learned more I found out that he was the first victim of the "Avian Culinary Strikeforce", much like the "Dairy Products Taskforce" they had at MCI Norfolk, only instead [part of the next page is obscured] ordinary strikeforce, or some other insane posse of law enforcement failure.

The humor in all of this is certainly raw, but it is really a very sad and dangerous situation. We read about a prisoner who was released on parole only to murder a police officer in the course of an armed robbery. He is certainly responsible for his actions, and must take the blame, but I saw first hand (because I knew him) how the insanity of prison policy enforcement drastically lessened his chances at successful reentry. Maybe if the money used to fund the Avian and Dairy forces was used to offer more job skills and education to men exiting prison this deceased policeman would still be alive? Maybe if they placed less emphasis on stopping Birdmen and Milkmen they could staff the schools, programs, and work assignments that they close daily in prisons due to understaffing. It is at least worth a shot.

Burt Lancaster was the Birdman of Alcatraz in the famous Hollywood movie. He was abused by guards and lashed out to kill one. He was a good man who made mistakes, but who proved he was worthy of the forgiveness of society. The Birdmen in the Commonwealth's prisons are being subjected daily to the same kinds of abuse, but there seems to be no redemptive chapter to the story. Do you want men to learn the lesson that they can again, or for the first time, become productive members of society, or do you want them to learn the lessen they are being taught today which is, "DO NOT FEED THE BIRDS"??? The choice can be yours if you get involved.

If you want to know more about the insanity of prison policy enforcement you can contact the author at :